Michael Cimino could have done worse for his first directing gig — a big Clint Eastwood-Jeff Bridges buddy picture with guaranteed major attention. It’s a simple crime caper for simple audiences, and he pulls it off in style. The Sunday movie supplements celebrated Cimino as a great new talent. His picture still looks handsome and it runs like a Swiss watch — the writer-director even has his vulgar comedy down pat, giving bad guy George Kennedy a few memorable choice bits to play. 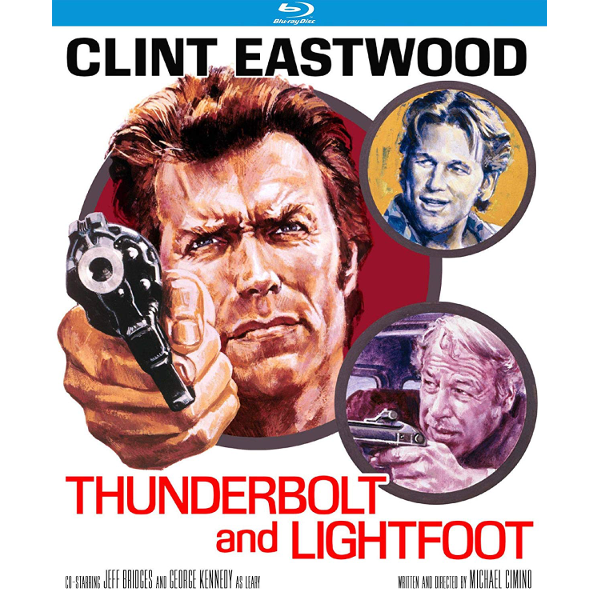 Cimino apparently brought his script and shot list to Clint Eastwood’s Malpaso Company, and left most of the details to Eastwood and his producer Robert Daley. As the majority of the cast comes from the star’s stock company and old TV friends, we’d imagine that Cimino accepted most of what he was given in that department. We can’t imagine Clint indulging a single hour of Cimino’s later on-set brainstorms or creative longueurs. The resulting movie shows the new director doing terrific work — his scene blocking is better than Eastwood’s was at the time. All in all, it’s a winning debut feature.

The story is that standard fracas among untrustworthy thieves. A falling-out has left Red Leary (George Kennedy) obsessed with killing ‘Thunderbolt’ (Clint Eastwood), with help from gang members Eddie Goody and Dunlop (Geoffrey Lewis & Roy Jenson). It seems the loot from their big caper disappeared when the small Montana schoolhouse in which it was hidden was demolished. Thunderbolt is hiding out as a preacher when he’s saved from Dunlop by the intervention of young drifter Lightfoot (Jeff Bridges). Goody and Red finally corner Thunderbolt, but the thieves instead re-establish their partnership. The smart-talking Lightfoot can’t shed Red’s hatred, yet comes up with an idea everybody likes: re-do the old Armored Transport robbery they pulled off several years ago, in the exact same way. They hire on for straight jobs to earn the seed money. As Korean War vets, Red and Thunderbolt will use a military artillery piece to blast their way into a vault. But can the gang make it through the heist without killing each other?

Never was a crime action film better shaped to commercial requirements. Thunderbolt and Lightfoot has sufficient action and fresh genre twists. With Clint Eastwood as the star the film is a no-risk proposition. High-powered cars and stolen clunkers of every description scream down the country roads under blue Panavision skies, amid scenery as attractive as a western. Of course we never ask where the police and highway patrol might be, especially when our heroes steal cars left and right (one right off a used-car lot) and drive them around for days at a time. The same goes for gun battles on the street — in a place so sparsely populated one would think our four very distinctive crooks would be in the hoosegow within a few hours. These are the kind of guys that sharp rural cops take note of as soon as they show their faces. But this is the movies.

Thunderbolt and Lightfoot is a buddy picture at heart. Cimino gives special weight to the main relationship between Eastwood and Bridges, granting them fairly shallow and jokey dialogue but directing it all quite effectively. Cimino pushes the crude jokes and the sex talk, which along with some vulgar situations earn the film an R rating. Young Lightfoot wears leather pants and attracts women like flies, bringing home a pair of girls for a fast fling. One of them is Catherine Bach, a small part that nevertheless nabs her good billing in this woman-challenged man’s crime picture. The playful sex banter has fun with Bridges going in drag as part of the heist. Critics like Robin Wood have rushed to define Thunderbolt as a prime example of the buddy picture with (gasp) Homosexual Overtones. As it was said In the Beginning, every male relationship in every cop and cowboy picture has A Hidden Sexual Agenda.

I think Cimino was simply compensating for having no women in his film, and opted for the fun of showing Jeff Bridges taunting Red in any way he can. Bridges is so funny at this stuff that he earned a Best Supporting Actor nomination. Of course, the film’s (spoiler spoiler spoiler) finish didn’t hurt Bridges’ chances either. As the curtain is going down, Cimino opts for a dose of hasty sentiment to give his movie some weight. Bridges and Eastwood play it well and Cimino deserves applause too.

At just under two hours Thunderbolt and Lightfoot is a bit overlong, a Cimino trademark. He also has problems with redundant action — just how many times does George Kennedy need to threaten Clint Eastwood & Jeff Bridges and then back off? The ‘let’s all get jobs’ episode also drags a bit, even with diversions like Jeff Bridges’ near-pornographic encounter with an exhibitionist housewife. Cimino exploits the beautiful location scenery well, and indulges his habit of staging scenes on the banks of bodies of water. Lightfoot and Thunderbolt find themselves on foot by the beautiful Snake River, which to us Los Angeles residents might as well be flowing from heaven. When Bridges kneels down and takes a long drink, we think about the daily news bulletins of industries poisoning entire rivers and water supplies. In Cimino’s The Deer Hunter Robert de Niro experiences a Thoreau moment by a pre-dawn glacial lake (somewhere in Pennsylvania?). And Kris Kristofferson & Isabelle Huppert share an idyllic surrey outing adjacent to a mirror-like lake in Heaven’s Gate.

Thunderbolt is pitched on a smaller scale, but Cimino generates excitement and easy laughs, along with some good character touches. George Kennedy & Geoffrey Lewis are genre eccentrics defined mostly by action, with Geoffrey’s Goody being too meek to point a gun. Kennedy’s Red is always in a hostile mode — as he sees it, everybody has betrayed him and therefore has a bullet coming. Some of Cimino’s set pieces are truly impressive and others merely clever, like the vicious guard dogs that Red foolishly overlooks. When Thunderbolt found that the little old schoolhouse replaced with a new construction, we’re reminded of how the changing landscape obliterates our past and makes us feel obsolete. The old building’s ironic reappearance redirects the genre thriller away from lowest-common-denominator hackwork. Eastwood and Bridges enter like schoolboys, as if the one-room schoolhouse were Dorothy Gale’s home magically returned from Oz, in one piece.

Thunderbolt and Lightfoot is fun for the minor cast members as well. Gary Busey has a nice bit as a lawn sprinkler installer. Burton Gilliam is the expected moronic working guy, a welder who befriends Thunderbolt. Wild man Bill McKinney lets our heroes hitchhike in his car packed with raccoons and rabbits, but then drives like a maniac. Dub Taylor does his fast-talking act as a gas station attendant and Gregory Walcott is a pushy used car salesman. Walcott was Clint Eastwood’s friend from the TV days, who never lived down a memorable résumé item: he starred in Ed Wood’s Plan 9 from Outer Space.

Raunchy and rambling, Thunderbolt and Lightfoot arrived at a time when average audiences still took note of the fact that the hero is a thief who in the end gets away with a pile of stolen money. Believe it or not, that was a big topic of discussion with films like Sam Peckinpah’s The Getaway (1972). Even after the abandonment of the Production Code, many moviegoers thought an unwritten movie law was on the books, that decreed that Crime Never Pays.

Nick Pinkerton delvers another of his no-nonsense, fact-filled audio commentaries; I enjoyed his track on Kino’s Touchez pas au grisbi a couple of months back. I waited — yep, Pinkerton does indeed tag Gregory Walcott with the Ed Wood connection. Pinkerton cites Richard Schickel, who had already noted hints of dissatisfaction with the American dream in Eastwood pictures — unless they’re corrupt, the peripheral characters aren’t having an easy time of making a living. He finds every possible way to praise Thunderbolt & Lightfoot, which is no mean accomplishment for Michael Cimino, even if Eastwood’s Malpaso productions shares credit as well. The influences are obviously there, but I also see enough that’s original in Cimino’s approach to not owe too much to Sergio Leone or Don Siegel.

A half-hour French docu For the Love of Characters uses film clips and stills to illustrate an extended audio interview with director Michael Cimino, who tells his story of collaborating with Clint Eastwood in agreeable fashion, from Magnum Force forward. Cimino’s basic argument is that he doesn’t build his screenplays around story or politics, but a concept of a character. He says that it began as a period story.

Kino includes a trailer and advertising spots for TV and radio. I will keep Twilight Time’s older Blu-ray because it has an Isolated Music Track with the film score of Dee Barton, who also composed for Eastwood’s Play Misty for Me. One scene shows Thunderbolt picking out notes on an old piano; in 1974 only Clint’s close associates seem to have known about his musical ambitions. These were the years that Malpaso was trying on different studios for comfort fit. Eastwood was about to branch out from can’t-lose action shows, to directing more more personal projects from time to time.