Franceso Rosi’s warm, thoughtful tale sees a family gathering observe grievous modern problems — after so much violence in Italian politics people are still looking for humanistic solutions. Philippe Noiret heads a great cast (with Charles Vanel) in this mellow reflection on ‘the things of life.’ 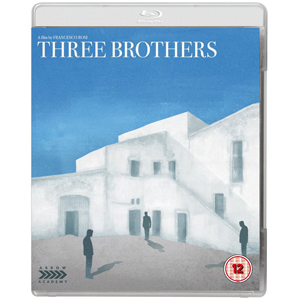 So few of Francesco Rosi’s films were released in the United States that until Criterion’s disc of Salvatore Giuliano my only image of the filmmaker was as a maker of political crime dramas. ‘Uncompromising’ is the keyword with Rosi. Salvatore Giuliano suggests that a famous bandit was really a political guerilla, caught between American promises for an independent Sicily and the venality of the Mafia. Hands Over the City takes pains to explain how the intersection of the Mafia, big investors and shady politics destroys any possibility of decent civic planning in Naples. The Moment of Truth is an unflinching look at the carnage of the bullfight game, that extends to the exploitation of young would-be matadors. Likewise his brilliant opera adaptation Carmen doesn’t skimp on the carnal aspect of Merimeé’s story.

The late career Three Brothers (Tre fratelli) sees Francesco Rosi in a reflective mode, but still addressing pressing social problems. The source is an old story by Andrey Platanov, a critic of Lenin’s State Capitalism. The story of three brothers attending their mother’s funeral brings up three responses to social problems, not to make political points, but to express the need for a societal reconciliation.

Living in a troubled nation, none of these men can ignore the political environment. Old Donato Giuranna (Charles Vanel) cables his sons to announce the death of his beloved wife dies. Son Rocco (Vittorio Mezzogiorno) drops his work at a boy’s reformatory to return to the house in Calabria.. Stung by his problems as a labor activist and his separation from his wife, Nicola (Michele Placido) brings his little daughter along; her grandfather greets her quietly but warmly. Raffaele (Philippe Noiret) is a famous attorney in Rome charged with bringing terrorists to justice. The brothers haven’t been back in years, and they look up old friends. Some of the locals ask Raffaele for his political opinions. Bitter over the estrangement of his wife, Nicola rejects Raffaele’s go-slow advice about organizing in the workplace. Nicola then gives his brother Rocco grief about the fact that he doesn’t seem to have any relationships with women. While awaiting the funeral, each man is visited by a dream, which reveals his fears and desires.

Three Brothers begins so slowly that we almost think we’re in for a Taviani- like pastoral with rustic Italians walking slowly down dusty country pathways. But things become more interesting almost immediately. The old stone farmhouse of the Giurannas is an amazing warren of breezy rooms and chambers to hold grain. Nicola’s sweet young daughter explores the passageways, and takes off her shoes and dress to roll around in the golden harvest. She’s contrasted with Donato’s fond memories (seen in flashback) of his wife when they were young. She’s played by Simonetta Stefanelli, the ill-fated Sicilian bride in The Godfather. As Donato, old Charles Vanel has very little dialogue yet is a strong presence. The French star of The Wages of Fear and Diabolique makes a great old Italian, thinking about his dead wife and relating best to the little girl.

The story brings up possible violent conflicts and situations of jeopardy. As in most countries not actually torn by war, they worry about potential civil violence. Rocco takes care of his boys in the reformatory. They may not know it, but he refuses to inform on them to the cops. Raffaele’s wife (Andréa Ferréol of The Grand Bouffe) is brought to tears for fear that her husband will be assassinated, as have other prosecutors and even judges. Raffaele downplays the danger but carries a gun; she accuses him of enjoying the situation.

Each man experiences a dream, presented in differing styles. One is violent, another expresses a desire for a familial reconciliation and the third is an optimistic fantasy about the rescue of the young. They’re each very effective, and mix dark fears with utopian hopes. Rosi is a past master at presenting grim political quagmires and horror-stories of chilling injustice; here he reaches out with feelings of hope. Rosi co-authored the screenplay with his frequent collaborator Tonino Guerra, a writer with big credits in just about everything: dramas, political films, science fiction, horror and many top-talent art films.

Star Philippe Noiret is marvelous, as usual; Michele Placido is good-looking and tense and Vittorio Mezzogiorno is quietly virtuous. The reflective Three Brothers is a rich and memorable drama. 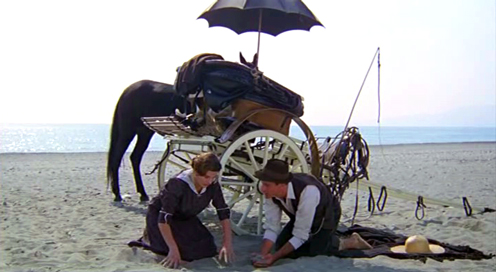 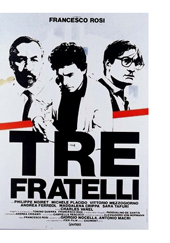 Arrow Academy’s Region B Blu-ray + PAL DVD of Three Brothers is a charming movie about modern problems, which doesn’t become a tragedy or a bloodbath. The images are extremely handsome; the cameraman is the celebrated Pasqualino De Santis. Piero Piccioni’s music gives the show a lift without straining to reinforce the nostalgia. The most idealized scene is old Donato’s wonderful memory flashback to the beach, where young Signora Giuranna loses her wedding ring in the sand.

A trailer is included but the main extra is an hour-long audio recording of an interview with director Rosi, conducted in broken English, at a London screening associated with the premiere of his 1987 film of Gabriel García Márquez’s novel Chronicle of a Death Foretold. The questions range across his career, starting with his apprenticeship with Luchino Visconti. Even if the language barrier slows him up, it’s a very good listen. The most consistently ‘committed’ Italian filmmaker shows not a single doubt about the direction of his career, even when asked whether he thought any of his exposés had an effect on society.