A breezy five-episode compilation movie about swindles plays out in five film capitals, under the eye of five different directors including Claude Chabrol and Jean-Luc Godard. But Roman Polanski’s Amsterdam segment couldn’t be included, which is a shame. It’s in B&W ‘scope, and everybody gets to bring their favorite cameraman and composer along. 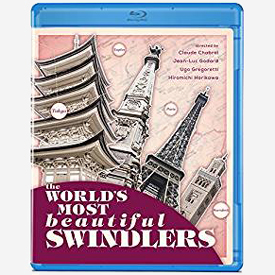 The popularity of omnibus, or portmanteau movies took a big uptick in Europe in the early ’60s, with pictures like Boccaccio ’70. Instead of having to put all of one’s eggs in one story basket, the producer of an omnibus movie could spread his risk across more than one director. Big-time directors reportedly liked the doing shorter films, as it was common to have good ideas difficult to stretch to feature length. As name directors had to deliver ‘masterpieces’ to uphold their reputations, a short subject was a no-risk job as well – if it flopped, it wouldn’t affect their bankability. Thus Federico Fellini felt free to put together an entirely frivolous comedy episode for Boccaccio ’70, which became the ½ in the title 8½ that represented the number of movies he had directed. An omnibus film might be able to afford more movie stars, as individual actors would be needed for less time. The actors could fit their work in between other longer-term projects.

1964’s The World’s Most Beautiful Swindlers (Les plus belles escroqueries du monde) is not the best omnibus picture of the ‘sixties, but it has been out of circulation for some time and is thus going to be must-see item for many. With episodes by Polanski, Chabrol and Godard, it’s often the one filmography entry missing to complete a list.

The new restoration released here by Olive Films has four out of five original episodes, and depending on which tally one believes, is either nine or nineteen minutes shorter than its original length. I’ll explain this more, a little further down.

The show launches into its episodes much like 1967’s Le streghe, with a musical intro and buffers between segments, this time a song crooned by Serge Gainsbourg. Without explanation, we get the idea that each picture will be about a female swindler, in a different international city. The entire show doesn’t keep that promise, but the first episode does.

Director Hiromichi Horikawa isn’t known much here but his able cameraman Asakazu Nakai shot a fistful of Akira Kurosawa’s best pictures. And the leading lady Mie Hama has a high profile as a Bond girl and roles in several Kaiju classics. The tightly scripted scenario sees club hostess Hama agreeing to go home with a man after hours because she sees an opportunity to finally afford an expensive pearl necklace she covets. The man carries a bag of cash but also brags about his dentures, which are made of a precious metal. He collapses and dies during their ‘date,’ she ends up with her dream necklace and the cops pull her in to find out how she obtained it.

Probably the most entertaining segment of the four, Horikawa’s episode looks good and actually follows the format of a femme voleuse. It works because it’s a light character piece, and Ms. Hama gets more opportunity to be charming than in her better known pictures.

Director Ugo Gregoretti contributed to another portmanteau show called Ro.Go.Pa.G., and made a science fiction satire called Omicron. With cameraman Tonino Della Colli and composer Piero Umilani, he zips through an extended skit about a prostitution racket. A conman gets the idea to keep the hookers on the street by marrying them to old men, thus making them legit. The joke sees a prostitute (Gabriella Giorgetti of The Organizer) lead on an obviously eager old geezer, who goes through the ceremony in high spirits. But he isn’t going to get what he expects.

This segment isn’t much of a con, and instead goes for easy gags about one crook’s scheme to counter the vice laws. Because of the unyielding divorce laws in Italy, a number of comedies skirted controversy by satirizing the situation of marriages that can only be ended through death, etc. This episode would seem to be provoking the censors, seeing how it so casually mocks the institution – sacrament. It’s busy but lacks personality and developed characters. Again, the cinematography is quite good, especially the night footage. 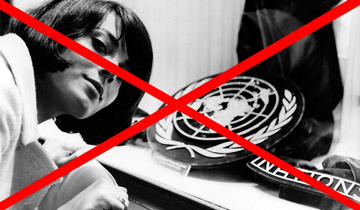 This is the missing segment, that’s not on the disc. The only clue to its fate is Olive’s announcement that Roman Polanski asked for its removal, which is too bad because it would hold an important position in Polanski’s work, coming after Knife in the Water but before his first English-language film Repulsion. I’ve been looking for it ever since reading Ivan Butler’s book on Polanski; at the time I thought the word ‘escroqueries’ had something to do with dishes . . . ‘crockery.’

Even Butler hadn’t seen the episode, it would seem, as he merely checks the title and shows a still of actress Nicole Karen smiling before the emblem of the United Nations. With only two listed characters, Karen’s swindler and a jeweler, the segment would seem to be a focused battle of wits. It would have been nice to find out if it resembled Polanski’s looser Polish film school style. Almost as a cruel joke, the trailer for The World’s Most Beautiful Swindlers included on this Olive disc shows several brief clips from this missing Polanski episode.

Claude Chabrol fans will be drawn to this, a comedy episode shot by Jean Rabier. It’s basically a one-joke item about a swindle to sell the Eiffel Tower to a gullible German (Francis Blanche). Chief among the swindlers is Jean-Pierre Cassel. It’s basically a series of meetings and a quick tour of the tower, followed by an unfunny comic scene where the German tries to take possession of his newly bought property. He goes into manic overdrive when he tangles with security. The one joke is how dumb the German is; Cassel’s co-conspirators constantly snicker and chuckle about their own deviousness, and he never catches on.

The ‘belle’ in this episode is Catherine Deneuve, pre- Umbrellas of Cherbourg, but she really has nothing to do but answer phones and smile sedately while sitting in the background of a few shots. A more prominent dame in the proceedings is played by Philomène Toulouse. The episode is brisk and efficient, and fine as a travelogue. But I didn’t find it particularly clever or amusing.

Jean-Luc Godard’s concluding episode is the one that’s gotten the most attention. Technically speaking it’s an extension of Godard’s Breathless. Jean Seberg’s Patricia Franchini from that film is now Patricia Leacock, a reporter who is caught by the Moroccan police for possessing counterfeit currency. She talks it over with the inspector (László Szabó of Alphaville) and then finds the counterfeiter himself (Charles Denner), who proceeds to explain his philosophy at length: he’s using crime to strike back at capitalist exploitation (I think). That the best description I can make of the episode, which is yet another inside joke but does have more continuity than the average Godard feature. Quick cutaways to the ‘locals’ Patricia is shooting with her 16mm camera interrupt the on-the-street scenes; one man in a fez turns out to be Godard himself. A few wide shots with unclear action seem interminable.

The directing style could be called ‘cinema finger paints,’ with many things done just for fun. We certainly recognize Jean-Luc Godard’s impish spirit. The director appears to be using his throwaway directing technique of feeding actors lines they’ve never heard before, which they parrot back, without a cut. This leaves gaps between speeches where the director’s prompts have been removed. In Breathless Godard just cuts out the brief gaps, leaving jump-cuts; in Contempt he often doesn’t fill the dialog track, leaving telltale gaps where his voice was removed.

Once he got in the cutting room Godard apparently liked a snippet of dialogue, perhaps a single Arabic word, which sounds almost like a frog croaking. He copied the word about thirty times and dropped everywhere into Charles Denner’s big speech, loud and upfront every time. It’s maddeningly distracting, so much so that after three viewings I have yet to be able to pay full attention to Denner’s speech. For her part Jean Seberg plays entirely straight. I have a feeling that Godard knocked this off on a party weekend in Morocco, with plenty of time left over for R&R. The listed composer for the segment is Michel Legrand.

Olive Films’ Blu-ray of The World’s Most Beautiful Swindlers is an excellent presentation of this once elusive, and still incomplete, bit of European filmmaking. Completists will want to see the Chabrol and Godard episodes.

Nicely enough, everyone is left to speak their original languages (Japanese, German and English) and subtitled. As mentioned above, the original trailer included here has perhaps ten shots from the Amsterdam-set missing episode by Roman Polanski. It was the director’s first experience working in anamorphic widescreen, Franscope to be precise. Three years later Polanski began filming Dance of the Vampires flat, but after his location shoot in the Alps changed to Panavision, converting all the previous footage.