A Western classic that reveals, with staggering impact, the real meaning of violence. Surefire attraction for action fans, while controversy over film’s purpose and importance will lure thinking audience. Rating: R.

THE WILD BUNCH is probably the most important American Western since THE GREAT TRAIN ROBBERY (1903), and one which is likely to grow into a huge popular success, perhaps for the wrong reasons. Redefining traditional Western mythology in the harsh light of contemporary reality, it finalizes a transitional period in the evolution of the species. The Phil Feldman production’s controversial emphasis on sheer violence should be enough to lure the action trade in large number, and that alone guarantees a certain degree of boxoffice success. But the picture’s real merit lies in what it has to offer the thinking patron in terms of insight into what the Western form, and, indirectly, the American experience, is all about. This factor is bound to induce much critical comment and public discussion, prompting wide interest among discriminating filmgoers, including the important college-age audience.

Grown out of a unique national experience, the Western has been America’s most popular and original contribution to world fiction, and has formed the basis of a staggering number of motion pictures, all celebrating the myth of the inevitable triumph of justice over evil. The filmic Western’s depiction of violence, with bloodless wounds and nearly painless death, as mere “action” has come to obscure its inherent viciousness. In THE WILD BUNCH, director Sam Peckinpah reveals, with intense impact and disturbing fascination, the flow of blood and the pain of death.

The Wild Bunch is a murderous outlaw gang led by aging gunman Pike Bishop (William Holden), operating near the Mexican border in 1913, at the bitter end of the frontier era. Singleminded in its cold-blooded reliance on brutality as a way of life, the gang are utterly devoid of humane qualities, unmindful of the death and suffering they cause, going through the motions as if by rote, primarily because they don’t know how to do anything else. Time has passed them by, and they are doomed to live out their lives in an atmosphere of futility and defeat. Under threat of being returned to prison, ex-gang member Deke Thornton (Robert Ryan) is forced by the railroad company to lead a motley group of bounty hunters in pursuit of the gang. In the opening scenes, Thornton’s rooftop gunmen decimate a townful of innocent bystanders in a crossfire while attempting unsuccessfully to stop The Wild Bunch from robbing the town station office. The shattering, gruesomely detailed horror of the sequence is heightened by a brilliant displacement of time through the use of crosscutting between regular- speed and slowmotion views of death. As flesh and blood explode under the impact of shotgun blasts, an overpowering sense of honesty takes precedence even over the chilling poetry of death, marking THE WILD BUNCH as perhaps the most truthful Western ever made.

Previously only Italy’s Sergio Leone, viewing the Western from a posture divorced from national historical considerations, managed to distill its two essential ingredients: Violence and Confrontation. Presenting abundant mayhem in a stylized, somewhat cynical manner, the best of the Leone films built up elaborate, ritualized scenes of classic confrontations between characters of varying amorality. Peckinpah goes the necessary step further. His characters range from “corrupt” to “unspeakable,” not merely “anti-heroes,” but very nearly “anti-human.” By removing the expected confrontation (between Pike and Thornton) from his story, he forces the audience into a confrontation of its own—bringing the viewer face-to-face with the naked violence which has always been a vital part of America, and which has always been sublimated in the glamorized confections of Hollywood. 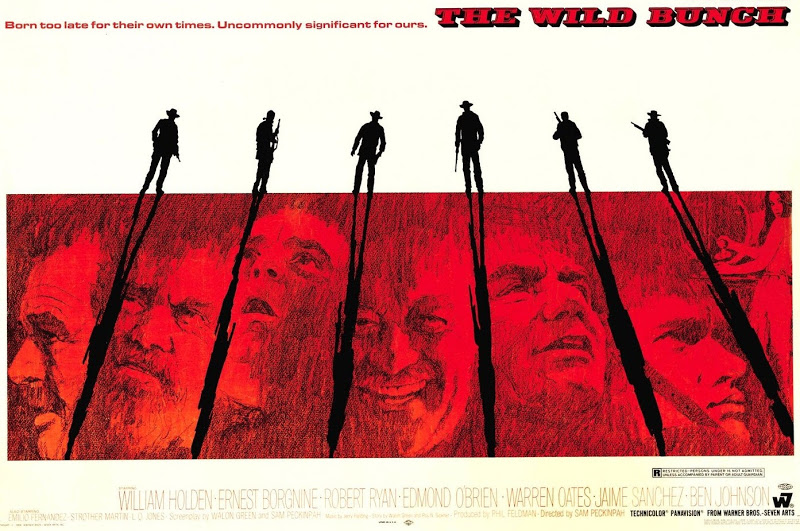 In collaboration with co-authors Walon Oreen and Roy IS. Sickner, the director also works an illuminating variation on a staple aspect of other exceptional Westerns, children’s imitative glam- orization of gunplay—such sequences having appeared in SHANE, HIGH NOON, FOR A FEW DOLLARS MORE and many others. Peckinpah’s use of children to the same end is extraordinary, beyond the first unsubtle glimpse of children gleefully watching a scorpion being eaten alive by red ants. In a number of telling shots, he shows their worship of the uniform, fascination with the mechanics of death, imitation of the gunmen; their awe tinged with fear during the carnage, and finally—in a masterful climactic stroke—Pike being shot in the back by a child.

The bulk of the plot is taken up with the gang’s efforts to hijack a munitions tzar from the US Army for Mexican bandit general Mapache (Emilio Fernandez), pursued all the while by Thornton and his men. During a final celebration, Mapache has a Mexican rebel gang member (Jaime Fernandez) put to death, and The Wild Bunch is goaded into a last, blood-drenched battle with the Mexicans which culminates in the slaughter of the entire gang.

The acting and technicalities are first-rate throughout. Holden has his first worthwhile role in years, and makes the most of it. Ryan is memorable, as always, as the degraded hunter who all too obviously would rather be riding with the gang once more. As a broken-down old gunslinger, Edmond O’Brien is superb, though almost unrecognizable; a sort of degenerate Gabby Hayes. Ernest Borgnine, Warren Oates, Ben Johnson and Sanchez are never less than convincing as members of the gang. Fernandez, Strother Martin, Chano Urueta and the late Albert Dekker are outstanding in supporting roles. Lucien Ballard’s dazzling photography is alternately dreamlike and nightmarishly real. Louis Lombardo’s editing is artful, although the ending is overextended and a number of flashbacks are rather clumsily introduced.

With THE WILD BUNCH, Sam Peckinpah joins the ranks of America’s major directors. He has— finally—held up a mirror to show us what we have really been watching for all these years. It is not a pretty sight, and many people will self-deceptively turn away and reject it. But its virtue is truth, and its implications inescapable.