Fox’s first official monster movie is a terrific-looking but mostly flat mystery that tries its utmost not to be a horror film at all. It’s a head scratcher that will interest fans of the expressive John Brahm, and help completists scratch another werewolf film off their gotta-see lists. 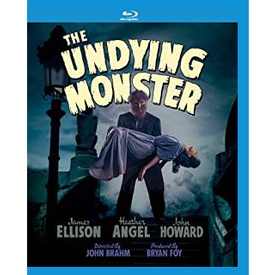 After the heyday of Universal horror in the first half of the 1930s, horror pictures went on the decline for over twenty years. Discouraged by the Production Code, all but banned by the British market, they stumbled through the 1940s mostly in the poverty row studios, where ‘scary pictures’ still performed at the exploitation and second feature level. Of course there are plenty of exceptions and the genre never completely dried up. Universal’s own horror output in the 1940s was mostly a tame and under-budgeted thing geared for fast profit. Just as the war began RKO decided to invest in low-budget fare and turned a horror unit over to former Selznick story editor Val Lewton. That quiet revolution in horror is well documented. Lewton rejected the childish fantasies of the Universal style, with its bogeyman monsters and formulaic plots.

It appears that Fox wanted to test out horror as well — in 1942 all the studios boosted production to provide the war economy with (in the big cities) around the clock film entertainment. Everything made money and horror pictures weren’t as expensive as musicals. Fox didn’t go ‘creative’ with a man like Val Lewton, but instead found a producer in Brian Foy, a sort of sub- Hal Wallis from Warners with a proven track record for grinding out factory product on the assembly line, whatever the studio wanted made. On the other hand, Fox chose well by assigning the interesting John Brahm to its first horror picture. He’d go on to do great work on a pair of Laird Cregar A-picture thrillers. 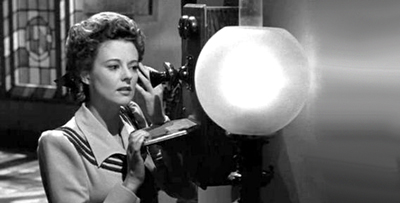 But 1942’s The Undying Monster is a definite underperformer. Fox threw top production resources at it — impressive sets, great cinematography by Lucien Ballard, and the expressive director Brahm. This is a beautiful-looking picture deep-sixed by a terrible script and completely indifferent casting. We all have our theories about this one, and since no one asked I’ll offer mine.

The Hammonds are yet another old English family that’s dwindled down to a brother and sister in residence in a massive stone house on yet another wind-swept cliff over the ocean. A family curse seems to strike again when Oliver Hammond (John Howard of Lost Horizon) and his nurse Kate (Valerie Traxler) are attacked by some kind of monster near the house. Helga Hammond (Heather Angel of The Informer) is terrified. Her brother Oliver seems on the mend but Kate falls into a coma and the family Doctor Geoff Colbert (Bramwell Fletcher) isn’t optimistic. Scotland Yard dispatches its lab expert Robert Curtis (James Ellison) and his aide Cornelia ‘Christy’ Christopher (Heather Thatcher) to help. Neither the servants nor the doctor are fully cooperative, and the doctor openly says he won’t tell everything he knows. Meanwhile, Christy theorizes about the house’s secret passages and spooky crypt. Only by taking medical evidence back to London can Robert make progress on the mystery. He returns with partial answers, but not soon enough to ward off another attack. 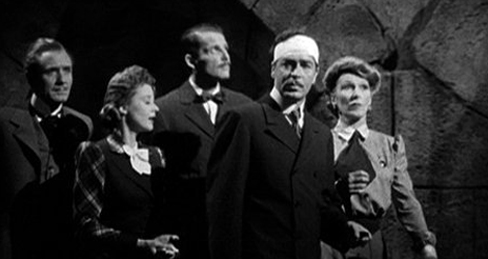 What is going on in The Undying Monster? I think that, even with the word ‘monster’ in the title, the film wants to be not a horror picture but a more ‘balanced’ mainstream mystery entertainment, more like Fox’s Basil Rathbone Sherlock Holmes movie, The Hound of the Baskervilles. Unlike the Val Lewton pictures it has no unifying attitude or theme and instead plays out in the never-land of ‘Landed Gentry with a Curse’ clichés.  Generic, lightly sketched characters basically have nothing to say; they both do and don’t take the legendary curse of the Hammonds seriously. The legal processes around a mysterious death make little sense. Doctor Colbert openly interferes with the investigation, refusing to help the forensic expert and even wiping away footprints in the crypt. For his part, Robert is so easygoing that he barely objects when most of the household obstructs his effort to find out the truth. He takes this in good humor, as if playing a game of Clue. Then there’s the comedy relief. Some of it is through Robert’s enthusiastic helper, Christy. For all her efforts her reward is to be made the butt of light sexist humor.

Werewolf? What werewolf? The movie seems embarrassed by its own subject matter. I think  The Undying Monster is trying its best not to sully the Fox brand with comparisons to the horror pix coming out from Monogram, PRC and even Columbia. But this is like making National Velvet and trying to minimize the horse content. We have one mystery attack up front, and then the rest of the show behaves as if some non-supernatural cause will be found.

Part of the problem is that the source novel by Jessie Douglas Kerrruish has no genuine werewolf. The family curse is really all psychological and the Hammond men only think they turn into wolves. It is all explained by exploring the family’s viking ancestry via hypnosis. (Yes, really.) Now imagine the poor screenwriter stuck trying to adapt that:  the novel has no real werewolf, but its alternate explanation is absurd. The audience is going to expect to see a werewolf and will feel cheated if they don’t get one. So what does the writer do?

When we finally see a main character in full monster makeup it’s as if the movie is delivering the scene as a truth in advertising requirement — a werewolf is displayed prominently on the posters. The medical explanation is nonsense. The investigator returns to business as usual, instead of convening a major scientific inquiry into the proven reality of a disease that turns men into shape-shifting monsters. 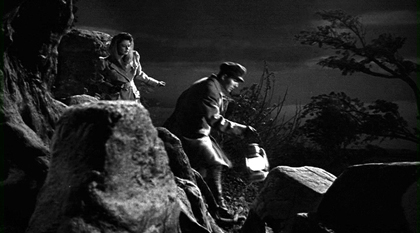 Val Lewton wanted his horror pictures to be nothing like Universal’s standard output. But Fox’s picture has music similar to a Universal movie and even the main titles resemble the Uni product. The monster makeup is practically copied from Uni’s The Wolf Man, even though it most closely resembles Bela Lugosi’s Sayer of the Law from Island of Lost Souls.

What’s different about the show aside from its meandering screenplay? Technically, The Undying Monster looks sensational, and is directed with good taste. John Brahm’s camera is continually in motion across, through and over some extremely handsome sets. The interiors of Hammond hall are impressive, and extensive use is made of what must have been an enormous ‘craggy moor and cliff-side’ set, big enough for a coach-and-four to gallop through. The whole thing is fully lit and has an excellent scenic backing.

I’m not kidding about the quality cinematography. The HD transfers of the Universal Classics show the great care that was taken on that series; The Undying Monster utilizes even more sophisticated lighting schemes on much larger sets. The cameraman is the legendary Lucien Ballard, who in his early career had experience with Josef von Sternberg. Ballard spent years working on program pictures before breaking through; his name graces scores of interestingly filmed movies at all budget levels, working with Sam Fuiller, Stanley Kubrick, Jacques Tourneur, Budd Boetticher, Raoul Walsh, Irving Lerner, Henry Hathaway, and Curtis Harrington. Ballard worked well with difficult directors. He surely contributed much more than camerawork to his Sam Peckinpah films — if it’s a great Peckinpah film, the chances are that Ballard shot it. 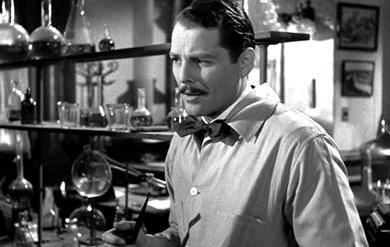 The Undying Monster isn’t lit expressionistically like some of the early Universal classics, and neither its look deep-shadow noir. It’s painterly and complex. The light in the tombs is full yet we don’t wonder what the lighting source is. Ordinary scenes are enhanced with effects such as windows wet with falling rain.

At this time star James Ellison was languishing in actor’s limbo, handed from studio to studio and put into whatever roles needed filling. He’d next be sent to RKO where he ended up in Lewton’s classic I Walked with a Zombie. Even with a mustache Ellison never seems English. Most everyone else in the picture inhabits a hollow cliché. Lovely Heather Angel starts with a character but is abandoned by the script. She ends up unconscious, being dragged all over that big cliff-side set. Bright Heather Thatcher has all the light comedy lines, which must have been nice for her after a career playing sober ladies and an occasional queen or two. Here she’s just in the way — her Christy is always looking for supernatural explanations, while Robert sticks to science.

Film noir fans will appreciate the first screen appearance of Charles McGraw as a horse groom who figures for a few minutes as a possible red herring. The future noir star has quite a few lines considering that he goes uncredited. He’d have to wait ’til the end of the war for his career to really take off.

Written with input from Gary Teetzel.

The KL Studio Classics Blu-ray of The Undying Monster shows what a difference HD can make for a transfer of a ‘run of the mill’ studio production. The image is really nice-looking, a showcase for John Brahm’s camera crane and Lucien Ballard’s lighting artistry. This is a minor movie with really impressive production values. 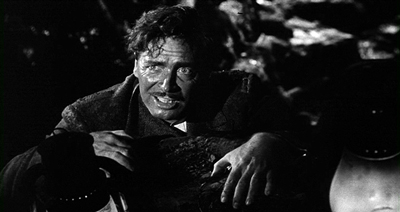 The Undying Monster was released on DVD nine years ago with John Brahm’s The Lodger and Hangover Square; the extras from that disc have been carried over. Concerto Macabre is a piece on director Brahm with a score of experts weighing in, treating this movie as an afterthought. The older restoration comparison is present as well as trailers and still galleries. Listed also is an alternate title sequence but I couldn’t locate it even after clicking all over the menu screen. The film was re-titled The Hammond Mystery for the United Kingdom.

One very welcome addition to standard Kino Blu-ray specs are the English subtitles. This is a thoughtful concession to older film fans that make up a sizeable proportion of disc collectors… many of whom have hearing issues.

New and highly listenable are a pair of audio commentaries from Tom Weaver. This picture gives the author something to sink his teeth into, after a couple of Kino disc commentaries where there weren’t enough interesting things to spread over sixty or seventy minutes of film. With help from his traditional cohorts David Schecter and Dr. Robert J. Kiss plus the director’s daughter Sumishta Brahm, Weaver fills two full tracks with discussions of every aspect of the show. I like where he points out a large printed number visible for a split second on the cyclorama of the big set. He also points out the crude rotoscope effect used to paste a werewolf head onto a ‘normal’ face for the final scene. That probably saved the production an entire makeup day but it looks awful. Amusingly, Tom Weaver openly admits that he has no affection for The Undying Monster and spends a lot of time criticizing it from every possible angle — yet the tracks remain cheerfully positive and his expertise gives us a lot to think about.