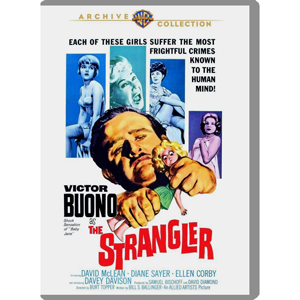 The old-time independent producer Edward Small gravitated to United Artists in the 1950s, while his counterpart Sam Bischoff often found himself at Allied Artists, sometimes aided and abetted by his co-producer David Diamond. Both gentlemen stuck mostly to safe bets — movies that could be made at a price and had a guaranteed payback. The subject matter tended to be ‘safe.’ A perfect example is one of Bischoff’s last pictures, 1964’s The Strangler. Just as his 1955 The Phenix City Story was keyed to headlines about corruption in a Southern city, Bischoff’s The Strangler answers the nervous news about a ‘mad strangler of Boston,’ who would eventually be captured and made into a higher profile Hollywood picture, The Boston Strangler. Television writer Bill Ballinger did his homework, noting that some of the strangler’s victims had been garroted with stockings. Other than that there’s little connection, despite two opening text screens stressing the film’s psychological accuracy.

What we really have is a horror picture gambling on the star potential of Victor Buono, the capable actor who made a positive impression in 1963’s major horror hit, Robert Aldrich’s What Ever Happened to Baby Jane?   In that Bette Davis-Joan Crawford battling harpy epic, Buono played an immature session pianist mollycoddled by a domineering mother. Ballinger’s screenplay invents a rather schematic murderer with very specific psychological problems; actor Buono provides the creepy malevolence.

The cops are having a tough time solving a string of strangling deaths of attractive young women. When nurse Helen Lawson (Selette Cole) is killed, hospital lab technician Leo Kroll (Victor Buono) is one of many employees questioned. Kroll attracts no suspicion and later passes a lie detector test with flying colors, yet is indeed the deranged killer they seek. Leo frequents a funfair, where he fantasizes that Barbara Wells (Diane Sayer), the attendant in a game booth, likes him and will be amenable to a marriage proposal should he ever be free. But Leo feels stifled by his needy, verbally abusive mother (Ellen Corby), who is recovering from a heart attack in the hospital. The grasping mother emphasizes how unattractive Leo is as a way to keep him for herself. Leo vents his frustration by killing the ‘unattainable’ women that attract him; at home he plays with the dolls he wins from the fair booth. The pattern continues with Clara Thomas, his mother’s nurse (Jeanne Bates) and finally with Barbara when she turns down Leo’s sincere but hopelessly awkward proposal. Cop Frank Benson (David McLean) asks Barbara’s friend Tally Raymond (Davey Davison) to help lay a trap for the killer, but she just wants to get out of town. Nobody guesses that Leo is already in position, ready to add Tally to the list of victims.

The Strangler is about as sedate as a story about a sex killer can be. Although Leo is both tall and obese he manages to climb into some of his victims’ rooms through convenient open windows. He knocks on one target female’s door in the middle of the night, when the victim is sleeping. Substituting for sex are voyeuristic scenes in which we learn that the first thing a working woman does upon returning home at night, is undress, preferably down to bra, panties and hosiery. The actual killings are brief and ‘in good taste,’ but more salacious than what was normally shown on TV programs at the time. Leo keeps his dolls in a desk drawer. We see him taking the clothing off of one of them, as if marking his latest conquest. Understanding why Leo kills is simple but he’s not particularly sympathetic. 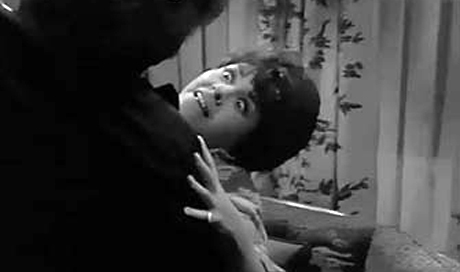 Victor Buono brings a slightly dispirited menace to the role. He has no trouble appearing normal to people around him, such as Thelma, his assistant in the lab (Mimi Dillard). Leo sincerely tries to keep the peace with his mother, but her browbeating makes him screw up his face in pain, like a little kid who knows he’s being unjustly punished. Buono underplays the menace, yet can’t resist a knowing smile when he fools the cops. In Baby Jane Buono was surely cast for what must be called ‘grotesque appeal’ — he’s a big marshmallow of a man, a gentle fellow who has absorbed too much casual cruelty and is striking back through wholly selfish, anti-social means. Many people are frustrated in their search for love and happiness but few flip out and kill people. Although it’s good to see Buono receive so much screen time, the role is a dead end for him. It would have been great to see Buono do a biopic of Laird Cregar, an actor who played hulking villains in wartime mysteries (The Lodger, I Wake Up Screaming, Hangover Square). Also a ‘large’ man, Cregar unrealistically fancied himself a future romantic lead, and undertook dangerous crash diets to slim down. 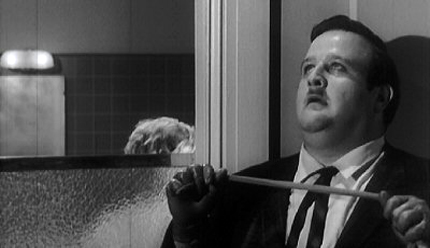 At least half of The Strangler is a plodding police procedural with few surprises. The cops get nowhere near the truth; we fumble about with a lie detector expert (Wally Campo) and other detectives, until a police artist (James B. Sikking) assembles a likeness of Leo Kroll under the direction of Tally Raymond. But Leo was already under their radar; the moment it was determined that Clara Thomas was his mother’s nurse, he should have become prime suspect #1.

Director Burt Topper made some A.I.P. and Allied Artists pix, often serving as a producer as well. His technique is standard and his staging dull — rooms always have one wall missing, as if they were tiny, under-dressed sets built side-by-side on the same sound stage. A studio back lot for a couple of street scenes looks exactly like what it is, while stock shots of cop cars prowling are at least ten years old. The filmmakers do open with a grabber, an extreme close-up of Leo’s eye with the reflection of Helen Lawson disrobing superimposed over his iris. The Strangler is an okay but not particularly distinguished entry in the post- Psycho ‘Horror of Personality’ subgenre. Leo Kroll isn’t as spectacularly perverse as some of his movie-psycho kin, but he is believable — as he’s twice a big and three times as heavy as his victims, it’s entirely credible that he can smother them like candles.

Robert Aldrich did right by his many ‘associates’:  after Victor Buono helped to make Baby Jane so memorable, the director gave him roles in his flaky western comedy Four for Texas and his hag-Guignol horror follow-up Hush…Hush, Sweet Charlotte.  Rather than become typed as a freak, Buono gained a sizeable fan following, in roles like the arch-villain King Tut in TV’s Batman. 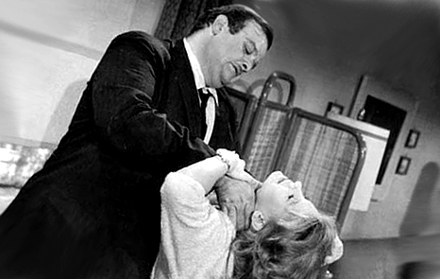 We look to films like The Strangler to see future stars and notables — films like this often provide career launching sites for unknown actors. Familiar face Ellen Corby is of course a standout, but none of the five actresses playing the victims received a major career boost. They instead had to settle for images of themselves being menaced on the film’s exploitative (and subject-verb agreement challenged) poster: “Each of these Girls Suffer the Most Frightful Crimes Known to the Human Mind.” Selette Cole (The Girl in Lovers Lane) Davey Davison (Marriage on the Rocks) and Jeanne Bates (Eraserhead) enjoyed long careers mostly in TV without attracting star attention; Diane Sayer (Madigan) did more or less the same in just a few years, but in better-known films.

The Warner Archive Collection DVD-R of The Strangler is a widescreen scan of this clean and well-preserved film. The only grainy shot I saw is an optical blow-up. Cameraman Jacques Marquette was a veteran of mini-budgeted ‘fifties pictures (The Brain from Planet Arous) and his efficient work at least gives star Buono some expressively lit close-ups. The audio is clear; there are no extras.

The poster illustration so neatly re-states the ‘broken doll’ motif from Baby Jane that we wonder if the doll sub-plot in the movie was invented for its marketing advantage. The Strangler will be snapped up by horror completists and fans of the unique Victor Buono.