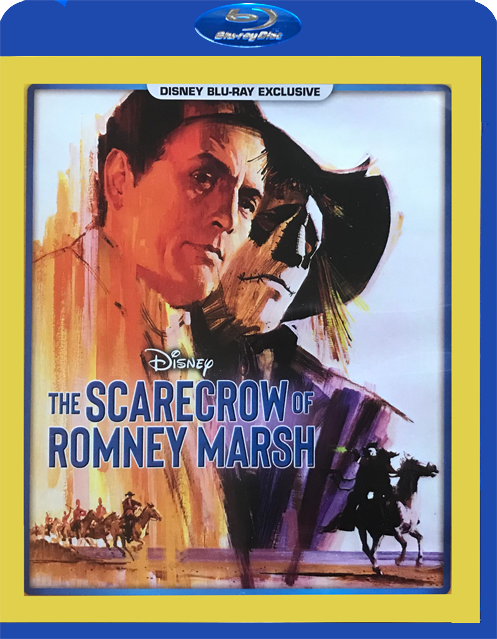 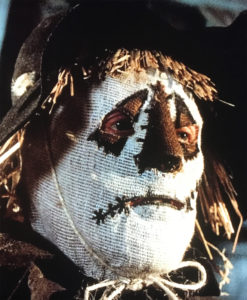 One part Walt Disney, one part Patrick McGoohan – a bittersweet recipe if ever there was one. The notoriously brusque Irishman was immune to the crowd-pleasing sentimentality that shaped Disney’s empire yet he headlined two of that studio’s most appealing entertainments, The Three Lives of Thomasina and The Scarecrow of Romney Marsh. An esoteric feline fantasy and a blood and thunder adventure tale, the films couldn’t have been more unalike but McGoohan anchored them both, reveling in the contradictions of his own characters. In Thomasina he plays a veterinarian with little love for animals. In Scarecrow he’s a kindly minister who spends his evenings terrorizing the parish. 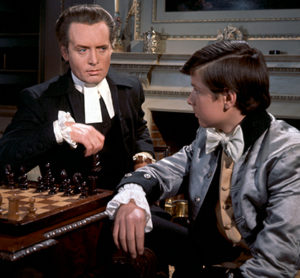 In 18th century England, a brutal age marked by despots and dissent, the Scarecrow haunts the tiny fishing port of Dymchurch. Announcing his presence with a bloodcurdling howl, the phantom appears only at night, wearing a burlap fright-mask, straw for hair and rags for a cape. By day he assumes the form of a soft-spoken vicar named Christopher Syn, a most unlikely guardian angel. This masked avenger is a worthy successor to Disney’s Zorro – though similarities end there. The fun-loving Spaniard worked alone and seemed to revel in his work – the Scarecrow is a dyspeptic scold bolstered by a small army of like-minded dissidents, one of whom sports a nicely appointed bird mask (reminiscent of that other masked anti-hero Judex.)

The mysterious vicar first appeared in 1915 with the publication of Doctor Syn: A Tale of the Romney Marsh written by Russell Thorndike (the sometime thespian also appeared as Syn on stage). The character proved popular enough that six more books were produced winding up in 1944 with Shadow of Doctor Syn. The tales were compact page-turners written in overheated prose reminiscent of popular pirate stories and penny-dreadfuls – perfect for adaptation by Disney. 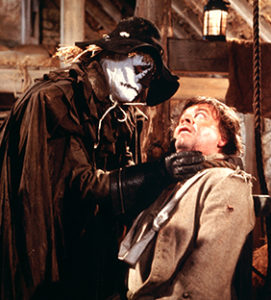 One of the platoon of screenwriters for King Vidor’s War and Peace, Robert Westerby dialed back his epic instincts and transformed the Thorndike book into a trio of short and sweet self-contained thrillers to be broadcast on Disney’s weekly television show. Well aware of the man who signed his checks, Westerby also omitted Syn’s grisly back story – though Hammer Studios went to great effort to exploit those very details in 1962’s Captain Clegg with Peter Cushing as the ill-fated reverend. Regardless of his sanitized biography, Disney’s Syn is not shy about handing out brutal justice while scaring the jodhpurs off the townsfolk – his harsh punishments for the press gangs and traitors in his midst carry such sadistic overtones it seems the good vicar might be trying to get something off his chest. 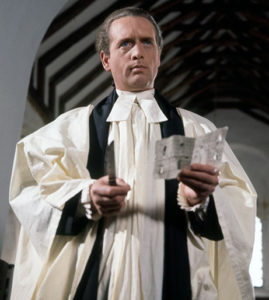 A prickly lone wolf himself, McGoohan had special insight into the cleric’s caustic alter-ego – “Dr. Syn was a kindly sort of fellow, but with a will of steel, and I always saw the Scarecrow as his other persona. So neither one was dominant, they each were compatible with the other.” McGoohan himself was wound pretty tight – much of the intrigue of his work rests in predicting the moment when he would snap. With the Scarecrow he found a healthy vehicle in which to channel that rage, thank goodness.

Director James Neilson worked predominantly in television before helming a few of Disney’s big screen outings including a good teen romance/mystery, The Moonspinners starring Hayley Mills and Eli Wallach. Neilson’s work on Scarecrow is the definition of workmanlike but it’s enlivened by a parade of trusty British actors including Patrick Wymark and Percy Herbert – not to mention George Cole as one of the Scarecrow’s Lieutenants and Michael Hordern as a big-hearted squire. Unfortunately young Scrooge and old Marley share no scenes together. As with all Disney productions the crew is first rate – cinematographer Paul Beeson and production designer Michael Stringer contribute mightily to the spooky atmospherics. 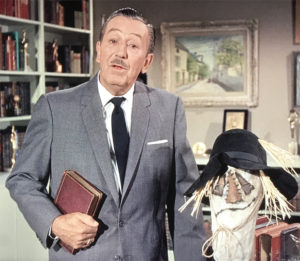 The Scarecrow of Romney Marsh was originally broadcast in February of 1964 on Walt Disney’s Wonderful World of Color. Divided into three episodes over consecutive weeks, it was later re-edited to feature length for a U.S. theatrical release in 1970 as Dr. Syn – Alias The Scarecrow. The three original broadcasts are, thankfully, the basis for The Disney Movie Club’s latest “classic” Blu ray (hello Boomers). The McGoohan/Disney/Scarecrow Fan Club will be delighted – the Scarecrow’s adventures have been packaged with tender, loving care, presenting each episode in its entirety with complete opening and closing credits as well as Walt’s introductions and previews of the next week’s show.

In 1912 a California artist by the name of Stanton MacDonald-Wright laid out a theory called Synchromism – a method of using color to express music – those studies led to some of the first abstract art to appear in America. Though Disney himself may have had little fondness for abstract art and MacDonald-Wright may have been a life-long aesthete, to see the paint-splashed opening of The Wonderful World of Color in high definition is dazzling, like an animated homage to Synchronism. The rest of the material is exceptionally vivid too – each episode begins with Uncle Walt’s homey lecture in 1:33.1 and when the film begins, opens up to widescreen ala The Road Warrior. It’s an 18th century thrill ride.