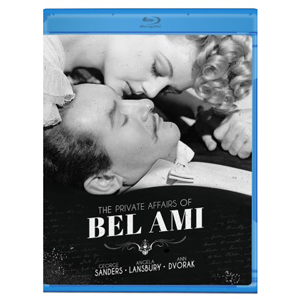 The Private Affairs of Bel Ami is yet another superior picture definitely worth checking out. It’s one of the lesser known but I think the best film by Albert Lewin, a former story consultant for David O. Selznick who then wrote and directed his own little sub-genre of ‘American Highbrow’ art films based on great literature. His most popular film by far is 1945’s The Picture of Dorian Gray. Lewin’s movies are immaculately designed and filmed, and extremely well cast. His recurring actor in three films is George Sanders, always playing one kind of cultured viper or another. In The Moon and Sixpence Sanders is W. Somerset Maugham’s Gaugin-like artist, a man who abuses everyone he knows in pursuit of his artistic ideal. Likewise, Sanders’ Mephistopheles-like Lord Henry Wotton steals Dorian Gray. Bel Ami may be Sanders’ best performance this side of his calculating columnist Addison DeWitt in All About Eve. He’s a dirty dog from the get-go. 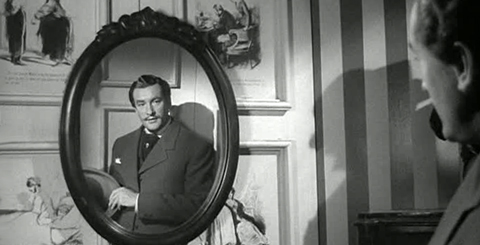 Broke and insolent, ex- soldier Georges Duroy (George Sanders) returns to Paris and takes the aid of Charles Forestier (John Carradine), a former comrade who helps him secure a job as a journalist on the paper of the wealthy Monsieiur Walter (Hugo Haas). Within a day the charming Duroy has attracted the attention both of the young widow Clotilde de Marelle (Angela Lansbury) and Forestier’s wife Claire (Ann Dvorak). He’s attracted to Clotilde but prefers to cultivate Claire to help him learn newspaper writing, and to use her political connections to scheme against his enemies real and perceived. Duroy also tries to woo Marie de Varenne (Frances Dee), a violinist married to a blind composer. Clotilde pledges her heart and soul to him, even though she knows he dallies with other women, like the dancer Rachel Minot (Marie Wilson). To achieve his ambitions Duroy strings along Clotilde but enters an open marriage with Claire. He proposes over Charles’s deathbed. Amazingly, Duroy’s long-range plan is to marry Suzanne (Susan Douglas), Monsieur Walter’s teenage daughter. 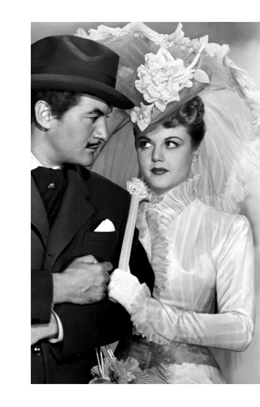 With Claire’s help Duroy establishes a cynical gossip column called Echoes, in which he uses whispered secrets and innuendo to make and break careers, and to humiliate his main enemy Larouch-Mathieu (Warren William). His also wraps Monsieur Walter’s wife (Katherine Emery) around his finger, and takes steps to secure himself a noble title, so as to be worthy of Suzanne. He was born a peasant, but Deroy’s ultimate aim is to become a high minister.

Lewin, Sanders and a capable cast put Bel Ami across in fine style. Lewin’s pictures are often regarded as fussy, overloaded with classical and artistic references, and dulled by pretentious highbrow dialogue. The complaints have merit. His beautifully filmed Pandora and the Flying Dutchman is in need of a serious dialogue dump — it’s as if half the speeches in the picture were paraphrased from Cliffs Notes.

In The Private Affairs of Bel Ami everything is in balance — the dialogue is ornate but never overwhelming. The relationships are especially rewarding, as the story is a lot more than just a tale of social climbing by a cad’s cad. Duroy suppresses his genuine affection for Clotilde to pursue his schemes, which include a sham marriage, the persecution of a political rival, the (apparent) seduction of three women, and various strategies that can only be called heinous. Duroy dreams up the idea of a tyrannical columnist all in one go, as soon as he learns to appreciate the power of the press. He cheats Claire into relinquishing half of a fortune she inherits from an old friend. The ink dry on that swindle is barely dry when Duroy sues her for divorce, naming his main enemy as co-respondent. It’s all to clear the way for the dream marriage that would give him a noble name and make him the inheritor of a publishing empire. Addison DeWitt never schemed this grandly. 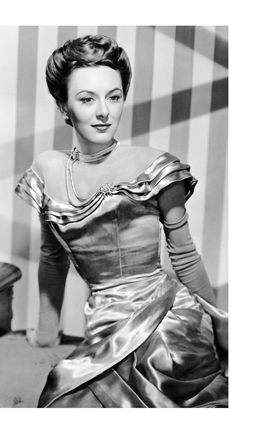 George Sanders’s performance has the depth and polish to make this impossible character work, and Bel Ami gives him a formidable array of female characters to abuse. Duroy has a conscience but suppresses it at every turn. His ruthless handling of Clotilde says it all. Not quite the pathetic victim that she played in Dorian Gray, Angela Lansbury gives Clotilde dignity no matter what she suffers for love of Duroy. Hollywood studio casualty Ann Dvorak bounces back with what might be her best career role. Claire Forestier is the most complex character in the piece, a woman who hides her values while colluding with Duroy in dirty politics. When he turns on her, she takes it in stride. Frances Dee is also known as a Hollywood outsider and individualist; when her Marie de Varenne rejects Duroy, the words sting. Katherine Emery’s Madame Walter is helpless against Duroy’s seductive powers, yet finds the will to strike back when her daughter Suzanne is threatened. Finally, in her first movie, favorite Susan Douglas (Five, Lost Boundaries) is the open-faced innocent who doesn’t realize that Duroy will use her as well.

Albert Lewin is a class act all the way. The show benefits from a stirring musical score by Darius Milhaud, and rich camerawork by Russell Metty. Lewin fans know that he inserted Technicolor shots of paintings into several of his B&W movies. The Moon and Sixpence has a final sequence in Tahiti where some paintings burn, and the image leaps into bright color. Much more famous are the shots of the haunted portrait in The Picture of Dorian Gray. And here we’re given a shot of a Max Ernst painting specially commissioned for Bel Ami, titled, “The Temptation of St. Anthony.” It’s a garish surreal landscape filled with grotesque monsters. It lacks the dramatic connection to the story that the color paintings in the other movies have. My private joke is that when Lewin made the all-Technicolor Pandora, he should have inserted a cutaway to a B&W artwork.

It’s hard to think of a better-cast movie of this kind… The Razor’s Edge, maybe?   Any picture with a substantial, dignified role for John Carradine is a classic by definition. Ann Dvorak and Angela Lansbury deliver terrific acting moments; Clotilde’s vilification of Duroy pulls a powerful reaction from the usually unflappable Sanders. This is Warren William’s final movie. Somebody had to be aware of the irony when his character accuses Duroy of being a cad — Williams personified the All-American cad in scores of pre-Code movies. Other fans will like seeing the cult figure Hugo Haas as one of those taken in by Duroy, and the forever-ancient Albert Basserman as a philosophical newspaper cartoonist. And for a cherry on top, Clotilde’s darling little daughter is played by Karolyn Grimes. If Sanders’ Duroy seems genuinely in love with the tot, there’s a good reason — Karolyn played Zuzu Bailey the year before in It’s a Wonderful Life. 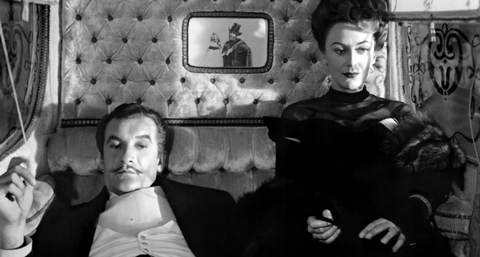 Only the scarcity of The Private Affairs of Bel Ami can account for its invisibility as a great film. It is never just a story of sin and comeuppance. Looking at a synopsis of the original de Maupassant book, we realize that Lewin softened all of the relationships. The moral retribution of the conclusion is apparently a Lewin invention. Everything chaste and platonic in the movie, isn’t in the book. Duroy originally slept with all the women, and Claire had lovers right through her marriages to Forestier and to Duroy. I have to say, it sounds as if the best place to find hot sex in print are books 150 years old.

Olive Films’ Blu-ray of The Private Affairs of Bel Ami looks splendid, especially considering how difficult this film was to see at one time. My only experience was with an old TV broadcast with commercials where whole scenes must have been cut out. UCLA helped with the restoration, which is indeed excellent. It’s now possible to appreciate the classic production design of Gordon Wiles, especially in the interior-exteriors. Cycloramic artwork of Paris buildings works in every case except a view of Notre Dame, which just looks too blatantly painted, hanging there in the background. The sets and foreground detail are so good, one might think this a French film. 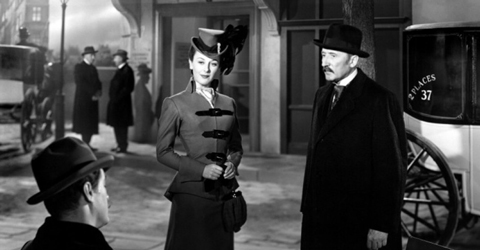 Olive’s screener came with a note calling out an audio flaw as part of the original film and not their doing. They needn’t have done so, as it’s only an overdubbed line during a dueling scene, which nobody would blame on Olive and I wouldn’t have noticed if it hadn’t been flagged. The disc also jumps to full color for the one scene with the Max Ernst painting, as it is supposed to. It’s a strange painting, a jumble of weird imagery.

Savant is always quick to express gratitude for English subtitles. In this case it’s a tough call, because they’re atrocious. Every time the most simple French phrase comes up the subtitle just reads either (‘in French’) or (‘mumble’). Nobody is mumbling. When someone says, ‘Venus de Milo,’ the subtitle reads ‘(in French’). Whoever did the subs doesn’t know the French word ‘sou’ and substitutes ‘suit.’ They also never heard the word ‘beseech,’ because they interpret that as the non-word ‘beseat.’ The subtitles read a clearly spoken ‘It’s a mania with her,’ as ‘(mumbles). A lot of the French ‘mumbles’ are words that could have been found in de Maupassant’s book. What makes subtitles expensive, taking the time to get them right, or their tricky placement and encoding?

The audio is very clear, so I won’t need the subtitles while I still have my hearing. Olive has brought out many great, formerly rare films on disc, and The Private Affairs of Bel Ami is one of the best.