Minimalist ‘Z’ monster movies really took off in the 1950s, earning good money on tiny outlays of time, money, and sometimes talent. Dan Milner’s directing is competent, to be kind, but the ‘nothing happens’ script is a sure-fire soporific — Roger Corman surely didn’t worry about the competition. The good news is Richard Harland Smith’s commentary, which delivers more illuminating info on this show than we thought existed. 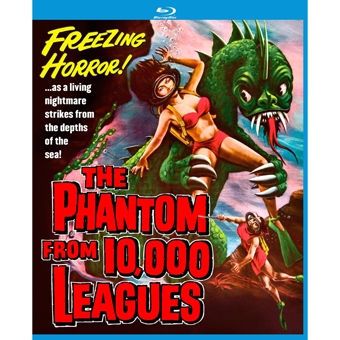 In his trailer commentary for The Phantom from 10,000 Leagues, Joe Dante remarks that he’s never met somebody who sat through the whole show. He also says that he first saw the movie at age ten, and was very disappointed by the monster. This conjures a mental image of little Joey walking out on a Saturday matinee, thinking, “I’m going to write an article about the worst movies I’ve seen, and it will be the best remembered piece ever written for Famous Monsters, when that magazine gets invented.” Phantom has gotten pretty much the same reaction from the fans I know. It’s what I call a Test Pattern Movie, from back in the day when the only way to learn anything about the unknown quantities that showed up in the TV logs, was to stay up late and endure dozens of commercials. The movie is slow. Not much is happening. You’re sleepy. You rest your eyes once, and when opening them, notice that a few seconds have gone by. You nod off a bit more, and tell yourself to pay attention or you’ll fall asleep. The picture just seems to get slower. The monster has to show up sometime soon… Just one more eye-rest, just for a minute… After what you thought was just a ‘blink’  the movie is suddenly over and you’re staring at white noise. The station has signed off for the night and turned off its signal. Missed it again! 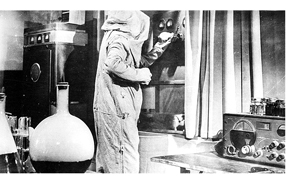 Actually, this disc of The Phantom should appeal to a wide sector of  monster fans, and not just the purists and completists. The court order came down in 1947, but it was the early 1950s before the studios seriously began divesting themselves of their theater chains. This enabled smaller distributors and freebooting film companies a crack at decent theater bookings. Of course A.I.P. is famous for exploiting this opportunity, but many others took a chance. Robert Lippert expanded his efforts, and new talent like Roger Corman and Herman Cohen got in the game. Stanley Kubrick belongs in this group as well, at least with his first picture. The movies are interesting because in them we see filmmakers with no money and no movie stars betting that they can make features that audiences will pay real money to see.

The Phantom from 10,000 Leagues delivers the minimum in all departments. There’s a monster, but he’s such a hackwork job that they probably shouldn’t have bothered. Two women show up to provide little more than decoration — even the foreign spy lies on the beach in a bathing suit. Phantom is competently filmed, but lethargy sets in by the second reel. By comparison, Roger Corman’s threadbare little pictures are minor masterpieces.

The story is hooey. A yarn about a secret monster and Commie spies is pushed into a shape that can be filmed in just two or three locations. Oceanographer-nuclear scientist Dr. King (Michael Whalen) carries out genetic mutation experiments based on atomic energy from a strange radioactive deposit found on the seabed. He’s made a monster in his secret lab, but another mutated creature lurks out in the bay, feeding off the glowing energy source. It kills several hapless scuba divers. Seductive spy Wanda (Helen Stanton), a shifty turncoat (Philip Pine), a government agent (Rodney Bell) and scientist Ted Stevens (Kent Taylor) converge on the scene, concealing their own identities while trying to learn the secret of the dangerous research. Ted gets close to Dr. King by befriending his daughter Lois (Cathy Downs). King’s secretary (Vivi Janiss) seems up to no good as well. 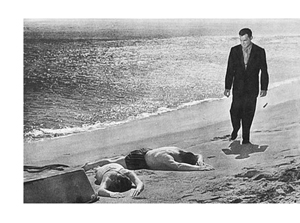 Taken at face value, that synopsis sounds like an adequate foundation for a monster potboiler. Unfortunately, Phantom is padded out to an excruciatingly dull eighty minutes of repetitive scenes and unimaginative storytelling.

Career editor Dan Milner was no amateur. Among his previous editing assignments are Douglas Sirk’s Hitler’s Madman and Edgar Ulmer’s The Naked Dawn. Given the nod from the new American Releasing Corporation, Dan and his brother Jack were trying to repeat the success of Roger Corman’s no-budget Monster from the Ocean Floor, which had made industry news the year before. Jack had worked on two of Corman’s pictures, as had writer Lou Rusoff.

Most of the character interaction takes place on the same stretch of Southern California seashore. Two or three sets of monster victims appear to tumble off the same rowboat, and wash ashore on the same spot. We’re told about events happening at a nearby University, but the G-Men conduct most of their business walking up and down the same sandy shoreline. Director Milner’s formula to save money seems to have been to stage multiple scenes from the exact same camera position. We can imagine the filmmakers leaving their camera rooted in one spot and facing different directions to film different ‘scenes.’ This plays havoc with screen direction. Cathy Downs’ house is established as being to the ‘left,’ but she walks there by exiting to the right. At one point, a bad guy kills a woman with a scuba spear gun. He fires from some scrub bushes on a hillside. His victim falls down to reveal the spear gun bolt sticking out of her back — but behind her is only an expanse of broad, empty beach.

The two interior sets are the scientist’s home and his office. The house has one room and a bathroom, from which the scientist’s daughter accidentally emerges wearing a towel. A dozen repetitive scenes take place in the office; over and over again, the scientist enters and removes his coat, or alternately retrieves his coat and prepares to exit. A research assistant in the pay of Wanda’s Natasha Fatale-type female spy tries but cannot coax a suspicious secretary into letting him enter the scientist’s lab — he does this at least three times, with the same result (no dice). The no-suspense script keeps people with spear guns skulking around for at least an hour, before someone finally enters the secret lab so the plot can get into gear. Just a few minutes of this arrested narrative progress results in a strange temporal dislocation. Scene after scene develops no new information, or goes off into a dialogue tangent apropos of nothing. The pace puts viewers to sleep. Seen late at night, with commercials, the rather brief movie seemed endless. 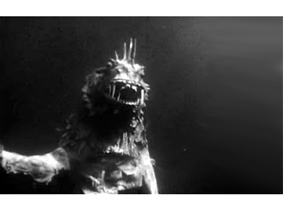 Other indicators tell us that we’ve entered the realm of Z-movie surrealism. When our characters examine dead bodies on the sand, normal beach activities are visible a few yards away and nobody seems to notice. The actors engage in inconsequential small talk, make entrances and exits, and do plenty of walking up and down the beach. Nobody seems particularly concerned about the mysterious deaths. Even though they’ve detected a foreign spy ring and discovered an incredible sea monster, the two main government agents stay unfazed, continue with their routine, and don’t even call for outside assistance. Yes, Phantom seems to unfold in another dimension.

The Phantom monster is a rubbery joke, a man wearing a fish suit and a mask that looks nothing like the poster illustration; it’s no wonder that matinee kids a few years older than me were disappointed. Phantom probably got released on the strength of its bubbly underwater scenes, which in 1955 were still fairly novel. Frankly, young filmmakers with low-budget ambitions can learn a lot from this impoverished monster show. Phantom strives to emulate the production values of mainstream Hollywood films and fails miserably. Most of the successful independent filmmakers brought fresh ambition to the screen, either new subject matter or a new point of view. A little dramatic feeling and directing talent help too.

The KL Studio Classics Blu-ray of The Phantom from 10,000 Leagues is a nearly spotless HD transfer that is a pleasure to watch, just to appreciate what a decent B&W cameraman can do with so few resources. The improvement over old TV broadcasts is remarkable. Because most of the beach scenes were filmed without fill light, it was often difficult to see the faces of the actors as they stand talking in the sun. In this sharp transfer, with HD’s broader contrast range, we can now see who’s who. 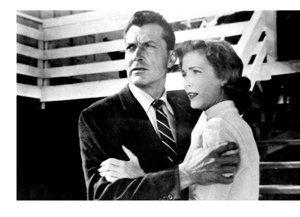 The aspect ratio has also been corrected. Until a DVD release eight years ago we’d only seen this on TV flat open-matte, leaving a good third of the screen with empty sky and ceilings above, and sand or carpeting below. The 1:85 masking at least gives us an approximation of good compositions, and allows us to focus on the people instead of the tacky sets.

Pulling through exceptionally well with a difficult feature commentary duty is TCM writer, playwright and trustworthy film expert Richard Harland Smith. As you can imagine, film journals and Hollywood histories are not overflowing with information about this show. Richard’s coverage is so thorough that we readily believe we’re getting the whole story. We hear about all the actors, mostly pros from the previous decade(s) on the career downgrade. Richard makes a running gag out of the fact that most of them passed away in Woodland Hills, until he reveals the existence of the movie industry’s retirement home in that town. When Richard can’t find any information on an actress, we can hear him pouting, like a detective who missed his quarry. But he can name all the stunt divers, so I think he must have located the elusive unpublished book by the married couple that filmed all the underwater scenes. There’s the usual long lists of credits and an occasional aside to tenuously connected movie ‘themes’ — hey, Dr. No has a Geiger counter too! — but all in all I’m impressed that anybody could find enough pertinent information to fill the eighty minutes of The Phantom from 10,000 Leagues with an interesting commentary. I only caught one real flub: between the 67-69 minute mark the track editor inadvertently repeats two separate sentences, doubling them up. It actually sort of befits this movie – many of its scenes feel like repeats of something we saw just a few minutes before.

Kino adds a trailer in so-so shape and also a trailer for the company’s new release The Monster that Challenged the World. The “Trailers from Hell” segment on this film is present, giving commentator Joe Dante the opportunity to tell his tale of adolescent disappointment at the matinee — with a nostalgic smile.