Political terror hits home, as a Buenos Aires teacher and housewife discovers that her family life is not only a lie, it’s a lie grounded in government treachery and murder. Forget conspiracy foolishness, for Luis Puenzo’s Oscar-winning tale is based on solid, documented truth, with an American connection. This is one of the first of the modern filmic political exposés from Latin America. 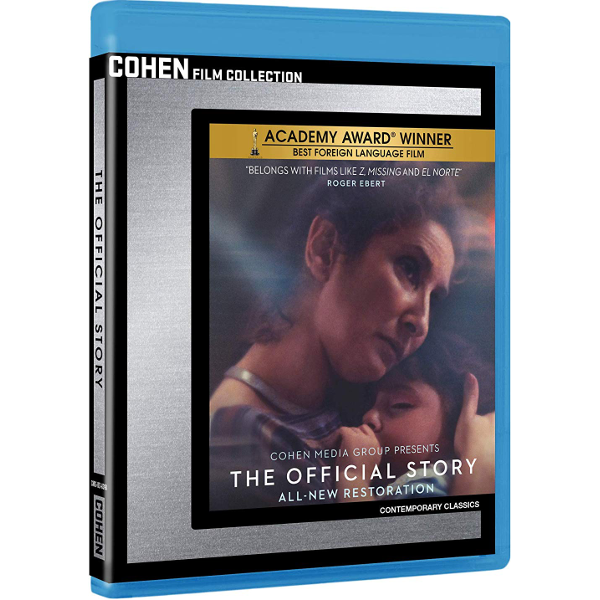 In 1986, Luis Puenzo’s film The Official Story won both an Oscar and a Golden Globe for Best Foreign Language Film. A few years earlier, any Argentinian even thinking of making a movie with its theme might have found himself ‘disappeared,’ secretly murdered by the military government and erased from the official record. After the disastrous Guerra del Atlántico Sur (The Falklands War) the junta lost power, and many Argentinan intellectuals were able to return to their homeland, after years of exile. Just the same, director Puenzo’s film was met with death threats during production — even a 4 year-old girl playing a lead role. The flagrant disappearance murders may have ceased, but the perpetrators were still around, many in their same jobs.

The Official Story is about political oppression and lies and the kind of high crimes and atrocities that were common occurrences in the cold war years, not just in totalitarian communist regimes, but also in dictatorships that were ‘encouraged’ to fight communism by whatever means they could. Unlike the conspiracy thriller “Z” and others of its kind, this absorbing drama sticks to an intimate domestic level, showing how a family seemingly above reproach can be revealed to be rotten to the core. A serious history lesson and a warning to any country divided along political lines, this film by Luis Puenzo (Old Gringo) is one of the finest to come out of Latin America.

Alicia (Norma Aleandro) teaches secondary school in Buenos Aires. Her husband Roberto (Héctor Alterio) is an officer in the military governmment. They have a beautiful young daughter, Gaby. The ‘troubles’ of the 1970s seem to have subsided and everything appears to be fine. Then Alicia’s old girlfriend Ana (Chunchuna Villafañe) returns from Europe. Alicia is moved by the story of why Ana left so hastily six years before: she’d been tortured and raped by government forces seeking the whereabouts of a boyfriend from her past, an anti-government radical. Roberto discourages Alicia from taking Ana’s story seriously, but Alicia investigates and discovers a horrible truth. Her ‘adopted’ daughter Gaby is almost certainly the stolen offspring of radical students murdered by her husband’s men. Alicia makes contact with Las abuelas, the grandmothers that protest daily in the public squares, seeking justice for the thousands of ‘disappeareds.’ She eventually finds one woman who may be Gaby’s grandmother. But what can Alicia possibly do about it?

Alicia’s story is a domestic nightmare. The Latin American home is supposed to be sacred, and the prosperous middle class has constructed an airtight denial pattern to keep it separate and secure from the problems of politics and ideology. Actually, the main goal of the Latin middle class would seem to be the pursuit of any kind of security to maintain their class status and privileges. Alicia slowly discovers that the ‘troubles’ of several years before reach right into her home, and that her marriage is built on lies and atrocious crime.

Alicia’s husband Roberto is part of a small political group that quietly arrange diplomatic and military exchanges between the Argentine government and the C.I.A.. His circle of working colleagues are well off and smug about the rightness of their work. As they are neck-deep in former ‘sensitive activities,’ they also maintain a strong solidarity of purpose. They often meet for dinner with their wives, and Alicia bridles at the arrogance of the top man’s missus, who takes it upon herself to criticize the other wives. Alicia has no cause to worry about it, but the loudmouthed woman alludes to something being wrong about Gaby’s adoption and Alicia not being able to bear children of her own.

Then Ana shows up with her horrendous story of torture and rape, and Alicia doesn’t know what to believe. Roberto’s disdainful response is to tell her not to associate with ‘that bitch’ and her lies, but he objects far too quickly. Alicia knows she’s being lied to. That leads to the investigation of the Grandmothers of the Disappeareds with the help of another teacher. The closer Alicia gets to the truth, the more domineering and unreasonable her husband becomes. The way he puts it, her innocent search for a fact threatens national security. He still refuses to be honest with her, demanding that she ignore the situation and stop making trouble. Alicia finds that she cannot, especially after she sees the photos of a pair of sweethearts barely out of their teens, who were murdered leaving behind a missing baby. Alicia’s Gaby is very likely that baby.

The brilliance of The Official Story lies in the way it equates Roberto’s paternalistic oppression of his own wife (be happy, enjoy my success, stop asking questions) with the way criminal governments operate. The Argentine military dictatorship was supported by outside money and expertise on how to conduct interrogations with torture. Thousands of Argentine citizens were kidnapped, imprisoned, tortured and murdered by right-wing death squads secretly operating for the dictator and funded ‘from overseas.’ None of this is fantasy or propaganda. Our own 60 Minutes once had chilling feature stories about the children of murdered ‘radicals’ – anyone denounced as anti-government – being adopted by police families unable to have children.

As Puenzo explains, the title “The Official Story” implies that there is a second, hidden True Story not being told. Official Stories now equate with almost any goverment evasion or falsehood meant to place a screen in front of sanctioned lies and criminal activity. The corrupt Argentine junta didn’t fall until it tried to unite the country behind military activity, in a failed reconquest of the Malvinas that was quickly put down by the British in 1982.

The Official Story is especially interesting because it shows an angle on Latin American life rarely seen in export films. The people are cosmopolitans living a lifestyle comparable to that of citizens in Europe or the U.S.; this isn’t the stereotyped ‘leftist’ movie about downtrodden peons struggling against all odds. The movie also cleverly uses the conventions of a soap opera as its framework. Alicia’s problem starts with a simple question about her family that needs to be cleared up. It never balloons into a conspiracy story with larger consequences. Roberto is a false husband who would rather do his wife harm than let her seriously question his crimes. His paternalistic tyranny aligns perfectly with the official tyranny that tortures and murders for the good of the people.

The acting is exceptional. Norma Aleandro is a busy working housewife surrounded by non-working petty damas de casa; Chunchuna Villafañe seems more modern and liberated for her time away from the country, even though she suffers permanent emotional damage. Héctor Alterio is the good company man making deals with American emissaries and exercising his masculine perogative to criticize Ana while leering at her. He’s particularly convincing when trying to force Alicia to obey him and stop asking questions, just because he’s the man of the family. Analia Castro is the cute daughter Gaby, who reminds of the Argentinian cartoon character Mafalda; she’s the most memorable tot I’ve seen in a Latin American film. Puenzo later describes her precociousness by explaining that Analia was four years old, but her character Gaby is meant to be five years old. 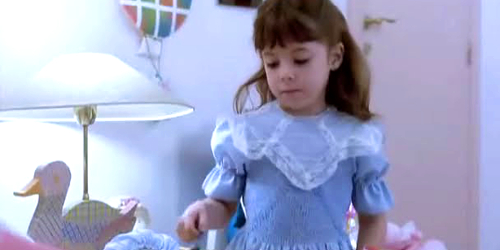 Politically speaking, The Official Story is a brave movie for its director and producers; it begins with the singing of the Argentine national anthem. Blind and thoughtless patriotism is an important part of the evil that Alicia comes to know. The film also won the Best Foreign Film award at the 1985 Golden Globes, and lead actress Norma Aleandro won best Actress at Cannes the same year. 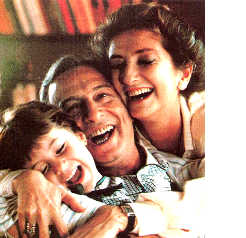 The Cohen Collection’s Blu-ray of The Official Story is a new 2K restoration that greatly improves on the old Koch Lorber DVD, both in picture and sound. The color scheme looked odd at first, with some strange skin tones. Yellow and green dominate in many exteriors, but the issue does not seem to be any overall color correction ‘interpretation.’ A detailed restoration demo shows actual screens of the color timing software used to tune the image.

Cohen’s extras are a treat, especially because the old disc had none. A four-part, roughly forty minute interview with director Puenzo is broken down into four parts. It’s fascinating. Puenzo details the political situation in Argentina before and after the Malvinas conflict, sketching the reasons that citizens would self-exile on the basis of something as simple as a phone call from a friend: ‘stay away.’ One of the film’s stars left because she barely escaped a bombing. Puenzo tries to put the period in perspective. Although they had to wait a long time to start filming, they shot scenes of the grandmothers protesting because they felt that everything would clear up at any moment. With the Junta out of power, they also thought Argentina would be a fully-recovered democracy by 1995. It’s educational listening to man from a sophisticated nation, who has to explain that the political fragmentation and discord has never gone away. He is proud of the way The Official Story expresses the basics of the horror in his country, without resorting to scenes of riots, violence or torture.

Puenzo’s film is a courageous production produced at a time when powerful interests in Argentina did not want the story of the Disappeareds told, official or un-official. I remember in 1975, at FILMEX, we saw a picture that had to be smuggled out of the country, La Patagonia Rebelde (Rebellion in Patagonia), which was banned even though it took place in 1920. The story concerns a brutal government crackdown and the anarchists that struck back against the generals in charge. It may have played on the ‘Z Channel,’ but I’m not sure; I haven’t seen any hint of it since.

I heartily recommend two more recent films, both of which star Gael García Bernal. Icíar Bollaín’s Even the Rain (También la lluvia) (2010) is the true story of resistance to a Bolivian-British-American corporation’s campaign to privatize the country’s water supply, and disallow private water collection, ‘even the rain.’ Pablo Larraín’s  ‘No’  (2012) is a fascinating account of a plebescite in Chile in 1988. Attempting to prop up his dictatorship, Pinochet allows dueling TV advertising campaigns to promote the ‘yes’ and ‘no’ choices to his party continuing in office. The left-wing ‘no’ opposition create cheerful, hopeful advocacy videos, all the while knowing that Pinochet might have them hunted down whether they win or lose. We see the actual videos created for both sides.