It’s great when a fancy costume picture really has something to say — Alan Bennett’s crazy tale of a king’s episode of mental illness becomes a highly entertaining comedy of errors, but with serious personal and political ramifications. Nigel Hawthorne is exceptionally good as the sovereign whose brain has de-railed; Helen Mirren, Ian Holm, Rupert Everett and Amanda Donohoe variously try to help him — or steal his crown. 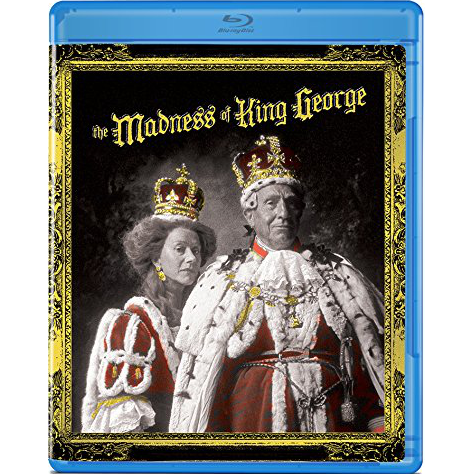 Every few years the Academy gives away a Best Picture statuette to a classy English production, often a Royal affair about important people, with important stars. This would be all fine and well if the movies held up — I mean, The King’s Speech and The Queen are fun pictures, but are they really that good? One Brit pomp & circumstance epic that makes the grade is 1994’s The Madness of King George, a wickedly smart yet sympathetic mini-epic about a case of Royal delirium. And heck, it doesn’t even have a tragic ending. It garnered some Acad nods but was gifted only one for Best Art Direction-Set Decoration.

Adapted by Alan Bennett from his own play, Madness ended up being seen by most Americans on cable TV, back when TV sets were mostly 36″ or smaller. Olive’s Blu-ray returns it to theatrical dimensions, where it positively glows. In 1788 King George III (Nigel Hawthorne), already an eccentric ruler, begins to lose his mind. At first he merely loses control of his deportment and begins acting erratically. This distresses his wife Queen Charlotte (Helen Mirren). Worse, it encourages the opposition in Parliament, led by Charles James Fox (Jim Carter), to depose George as incompetent and appoint as Regent his wastrel son the Prince of Wales (Rupert Everett). If the takeover succeeds, the reformers promise to do away with much of the sovereign’s power. The Prime Minister William Pitt the Younger (Julian Wadham) goes to extreme lengths to hide the King’s crazy behavior. Finally, through a suggestion by Lady Pembroke (Amanda Donohoe), he puts the King in the hands of Francis Willis (Ian Holm), a country farmer who treats mental illness with progressive methods. They’re at least more progressive than the various tortures prescribed by toadying, ignorant doctors of the royal court.

The Madness of King George is an exciting, often hilarious descent into regal chaos, with the wonderful Nigel Hawthorne marvelous as a King who cannot stop himself from speaking. He suffers hallucinations and blurts out obscenities as if he had Tourette’s Syndrome. Author Bennett plays the episode on several levels — the disturbance in the Royal home life, the schemes afoot in the government, and the trials endured by those close to the King.

A bundle of manic energy, George runs his staff ragged. He gets up at 4am to rush around the castle grounds in his night-shirt; when the family is roused to try and coax him back inside, he throws himself onto Lady Pembroke, right in front of his distressed wife. His ambitious son wastes no time trying to seize the throne; there are marvelous passages where the ins and outs of governmental wrangling are revealed as bald grabs for station, power and money. The reformer Fox has difficulty dislodging the hold that George’s PM Pitt has on Parliament. Pitt is personally honest and ethical, but the Lords are mainly loyal because they don’t want to disturb the many lucrative bribe deals that are in place. The doctors are scary-hilarious — it’s not clear that they practice anything resembling medicine. In deference to the sovereign they don’t ask questions directly or embarrass him with immodest examinations. But when he’s judged a loony fit for Bedlam they commence all manner of terrible procedures. One rubs blisters into the King’s skin for God knows what purpose. Another is obsessed with examining urine and feces, but each has his ignorant theories. The indignities of having one’s private functions made public makes the King a ripe candidate for overthrow.

George is eventually put under the charge of Willis, who is not a doctor but a preacher-behavior specialist inspired by the Bible. Willis decides that teaching George humility will do the trick, but the course of treatment includes psychological pressure and Torquemada-like restraints. Willis comes off as only slightly more enlightened than the Royal quacks – he forbids Charlotte to see her husband. She fears that it’s all part of the plot to depose George. The last person she trusts is her conniving, transparently contemptuous son.

Of the English case we know Helen Mirren the best; she gives the expected fine performance as the loyal and loving wife. Amanda Donohoe’s vixenish Lady Pembroke is no femme fatale, but also a faithful friend of the Crown. Pembroke manages well in a situation where the King’s behavior makes it seem that she’s been compromised. Later on, a discretionary use of her charms saves the day. The supporting actors turn a complex political story into an entertaining struggle for power. Rupert Everett plays the Prince of Wales as a pompous jerk, padded to look fat and topped with a Bozo the Clown hairstyle to make him seem even more ridiculous. Luckily, the Prince hands his father’s loyal men an ace in the hole — he’s secretly married to (gasp) a Catholic. Standouts are Julian Wadham as the humorless, hardworking PM and of course Ian Holm’s dedicated ‘doctor,’ who surprises us by (maybe) curing the King with stern discipline, not indulgent kindness.

Bennett’s excellent, sharp dialogue is not buried in ‘Olde Englund Speake,’ nor does it try to be clever with anachronistic observations. George’s greatest distress, which aggravated his mental imbalance, was Britain’s losing ‘the Colonies.’ He takes time out to wail about the great, beautiful land that has become its own nation, the U.S.A.. I wish average Americans appreciated their country as much as he did.

Based on reports that the King’s urine had turned blue, modern day doctors have retro-diagnosed George’s madness as a symptom of arsenic poisoning, probably something unintentional in his diet. He likely wasn’t cured by anything but being removed from the source of the poisoning. When George’s clarity returns, he remarks that he simply remembers how to behave as himself again. His habit of saying ‘what-what!’ all the time is the sign that he’s back to normal, which of course was eccentric to begin with.

The Madness of King George takes the time to show how these upheavals effect everybody. Various household helpers that served the King well during his time of ‘illness’ are then dismissed, as if their firsthand knowledge of his embarrassing behavior would make him too self-conscious. These include young Greville (Rupert Graves), a sort-of military companion-attendant who stays on the job through months of stress — although he does ‘betray’ his sovereign with Lady Pembroke. Greville is shown the door, while the opportunistic Fitzroy (Anthony Calf), who steered clear of the fray, earns a promotion.

Primarily a stage talent, Nicholas Hytner directs Madness with assurance, always finding ways to clarify scenes without undue showoff touches. The camera moves swiftly when needed and also nails excellent angles to show George’s excesses and sufferings. The Madness of King George can find its way to a (mostly) happy ending for all, including the audience. Olive Films’ Blu-ray of The Madness of King George is a bright and colorful encoding of a handsome production. The filmmakers fill the screen with characters behaving as they might in real life — with unhappy Royals at court sneaking drinks, for instance. The film doesn’t appear to have an original score, but uses classical selections from Handel.

Olive includes zero extras, so I visited contemporary reviews to see if The Madness of King George was well received. Most reviewers loved it, which is encouraging — I was charmed by it as well.