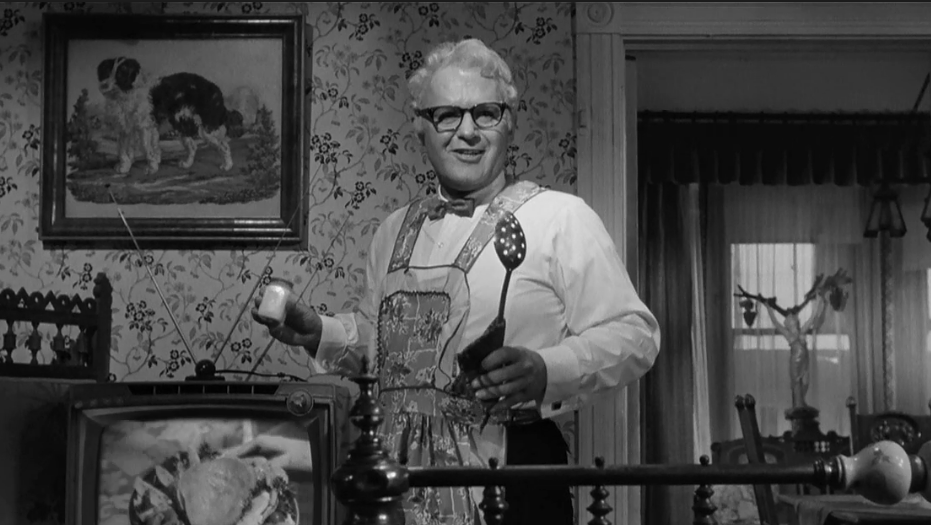 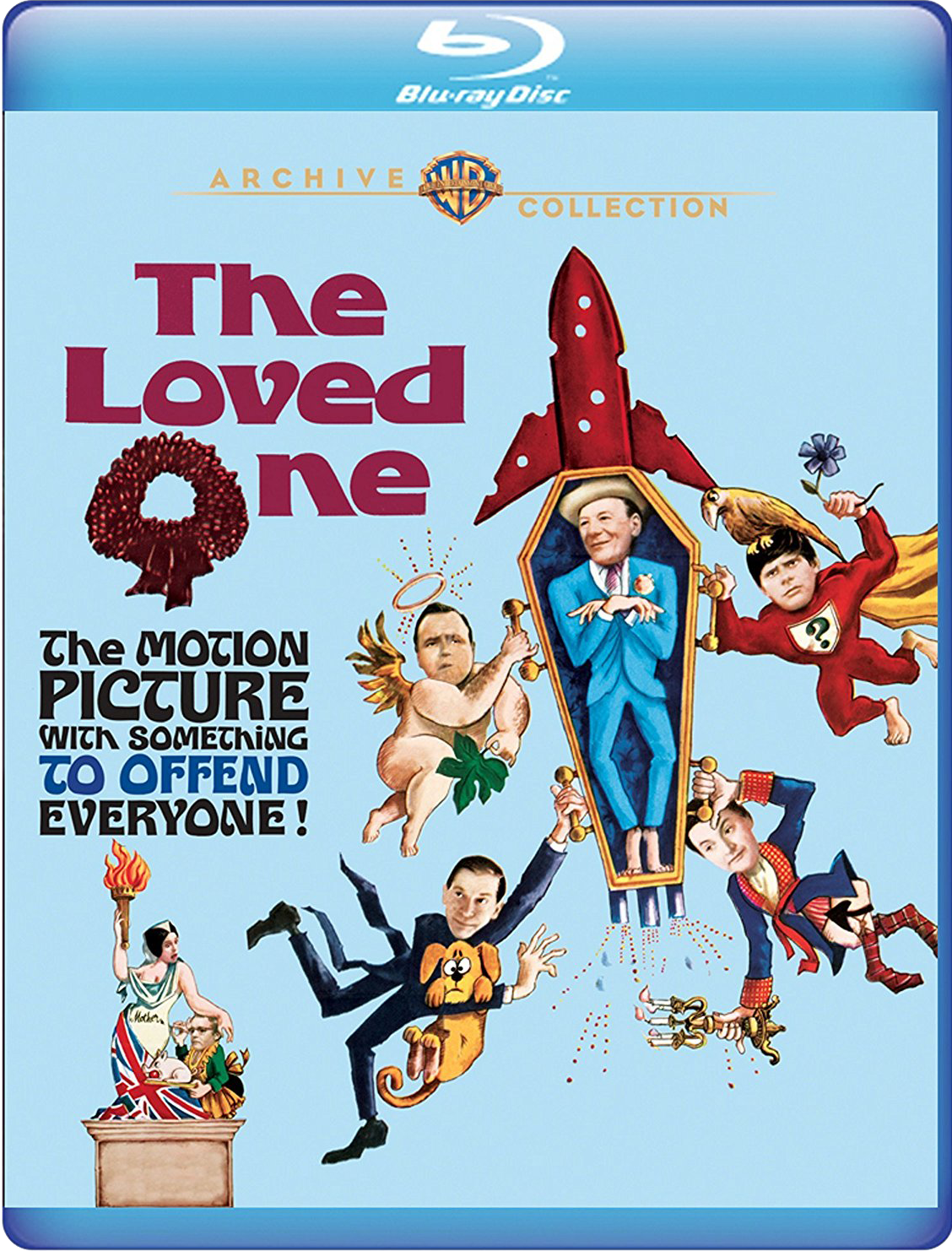 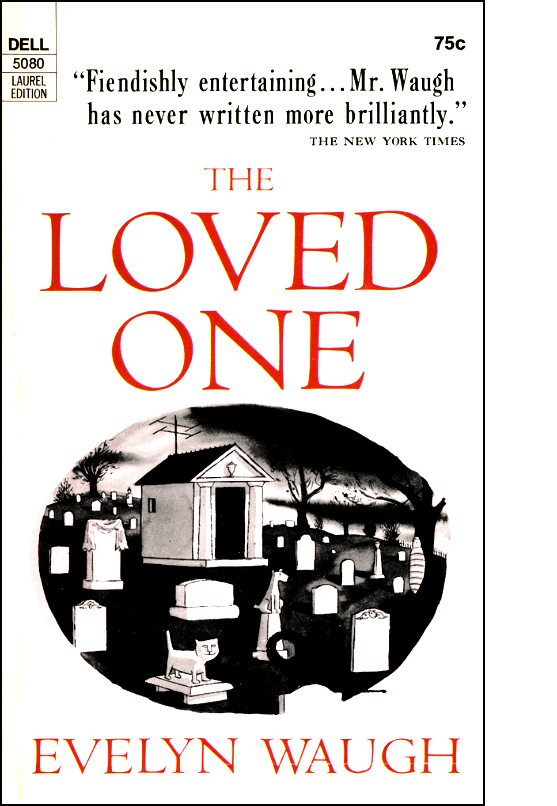 Funeral Director: Before you go, I was just wondering… would you be interested in some extras for the loved one?
Next Of Kin: What kind of extras?
Funeral Director: Well, how about a casket?

Mike Nichols and Elaine May – The $65 Dollar Funeral

That routine, a classic example of what was known in the early 60’s as “sick humor”, was nevertheless ubiquitous across mainstream variety shows like Ed Sullivan and Jack Paar. It also popularized the notion of a new boutique industry, the vanity funeral. The novelist Evelyn Waugh, decidedly less mainstream, documented the beginning of that phenomenon over a decade earlier with The Loved One, a briskly written poison pen letter to Hollywood.

That same Hollywood labored for years to bring Waugh’s controversial novel to the screen, eventually hiring Christopher Isherwood and the famously insubordinate Terry Southern to write the screenplay for a movie version to be directed by Tony Richardson. Southern, a dirty-minded bomb-thrower and would-be Voltaire was the polar opposite of Waugh, a deliberate, God-bothered aesthete who kept a dryly satirical lid on his most savage assaults.

The Englishman and the Yank were satirists at loggerheads. Southern, with his beatnik’s contempt for decorous American institutions and Waugh, with his disdain for those who would ignore them. But there was one thing on which they could both agree: movie producers and funeral directors, each with their love of grandiose, audience pleasing productions, were simply con men cut from the same cloth.

Robert Morse stars as Dennis Barlow, recently arrived in Hollywood to visit his expatriate uncle played by John Gielgud, a long-suffering staffer at Megalopolitan Studios. Show business is a cruel mistress and before Barlow has had a chance to unpack his bags his uncle is found hanging from the diving board of his dilapidated pool. 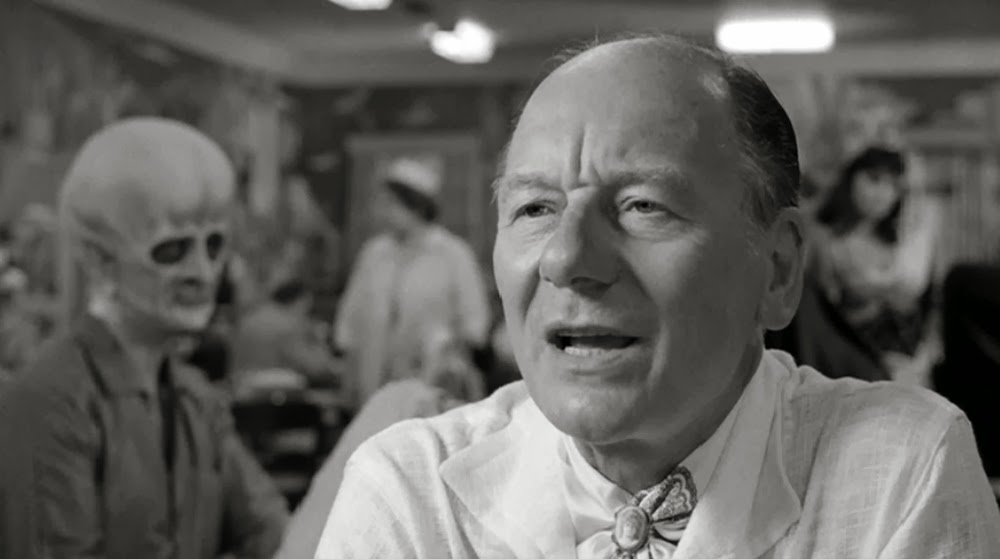 Tinsel town works in strange ways and the death of his uncle leads Barlow to the Whispering Glades cemetery, a Forest Lawn-like playground for the recently deceased and their monied next-of-kin. The cemetery (as well as the film) is staffed with a Bizarro-world supporting cast including Tab Hunter as an industrious tour guide, Liberace as the resident coffin connoisseur and a platinum-curled Rod Steiger as the chimerical Mr. Joyboy, Whispering Glades’ embalmer-in-chief. 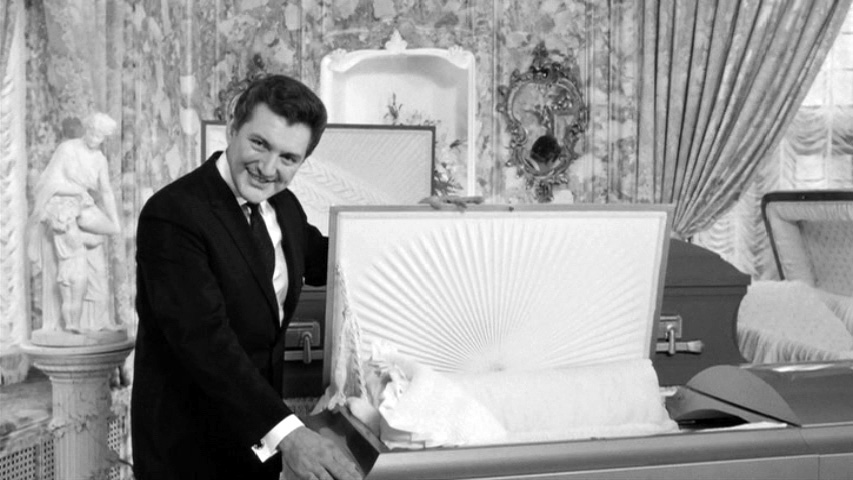 Aimée Thanatogenos, the doe-eyed cosmetician for the dearly departed, is the employee who most intrigues the homesick Barlow but he has competition in the Reverend Wilbur Glenworthy (Winters). Glenworthy, a bogus holy roller, rules the roost, the cemetery and a great deal of the local chamber of commerce. In reality a ruthless robber baron, Glenworthy isn’t seeing enough profit from Whispering Glades and wants to convert it into a more profitable retirement community. But there remains the little problem of all those folks lying six feet under. What to do with them? A boy scientist and his shiny assortment of rocket launchers might be just what the reverend ordered. 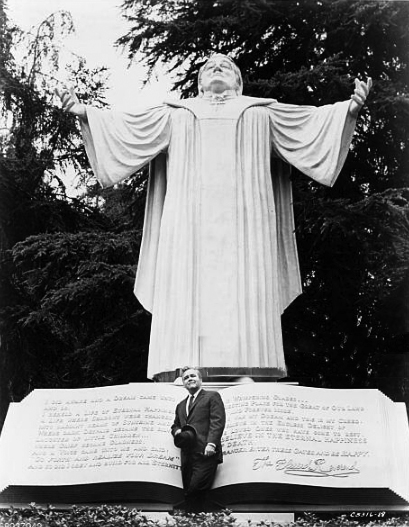 Tony Richardson’s film is an unruly marriage, a victim of the odd couple collision of Waugh’s subtly acerbic style and Southern’s take no prisoners approach. Thanks to the expert underplaying of actors like Gielgud, Anjanette Comer as the befuddled Aimée and a perfectly pitched Jonathan Winters (in a dual role as Glenworthy and his craven twin brother), some sequences work like gangbusters, achieving a sun-kissed screwball surrealism appropriate to the balmy L.A. environment. Alternatively, the film is just as likely to embarrass itself with clumsy set pieces like the orgasmic eating scene reprised from Richardson’s own Tom Jones.

Haskell Wexler’s superb black and white photography, with its classically lit tableaus shot through a jittery documentarian’s lens, gives the film a Strangelovian look that puts it on the shelf with other beautifully photographed black comedies of the sixties like Lolita and The Americanization of Emily. After The Loved One Wexler contributed to films as disparate as Who’s Afraid of Virginia Woolf?, In the Heat of the Night and One Flew Over the Cuckoo’s Nest but it was his direction of 1969’s barnstorming agitprop Medium Cool that truly defined him. A warning sounded late in that film, “Look out Haskell, it’s real!”, would have been an appropriate epitaph on his own Whispering Glades memorial.

Wexler’s work also helps to make this one of Warner Archives most beautiful blu ray presentations. The disc comes with a few extras including a short featurette, Trying to Offend Everyone and the original theatrical trailer (all ported over from the previous DVD release, but nonetheless enjoyable sideshows.) 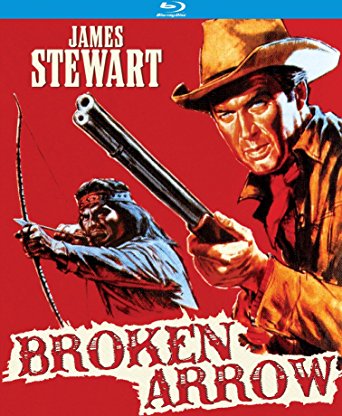 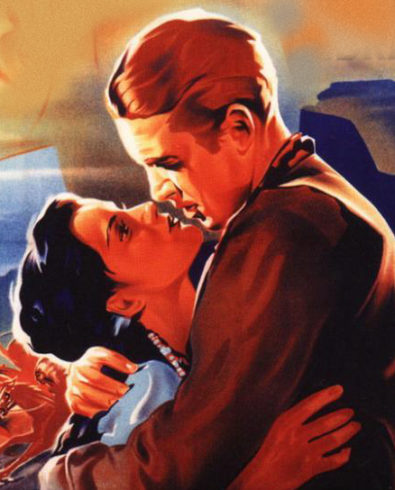 So forward thinking in its approach to race relations as to appear radical, 1950’s Broken Arrow features one of James Stewart’s finest performances and a script by Albert Maltz that plays out with the plain-spoken simplicity of a great children’s novel. Delmer Daves’ compassionate direction only serves to underscore the film’s righteous anger.

Most of that anger belongs to Stewart in his role as Tom Jeffords, an army scout fed up with his government’s never-ending war with the Indian people. One morning, he finds a young Apache boy, broken, bleeding and near death. Jeffords nurses the child’s wounds and as the boy heals and becomes more resilient, so does the weary scout’s determination to stop to the bloody madness.

Jeffords’ pleas for harmony fall on mostly deaf and mostly racist ears. So he ventures into the heart of Apache country to strike a bargain of his own with Cochise, the near-mythical leader of the Apaches. But it’s Sonseeahray, a heartbreakingly beautiful Apache maiden, who embodies the change of heart that Jeffords seeks. This lonely scout longs for fellowship, not just for his country, but for himself. 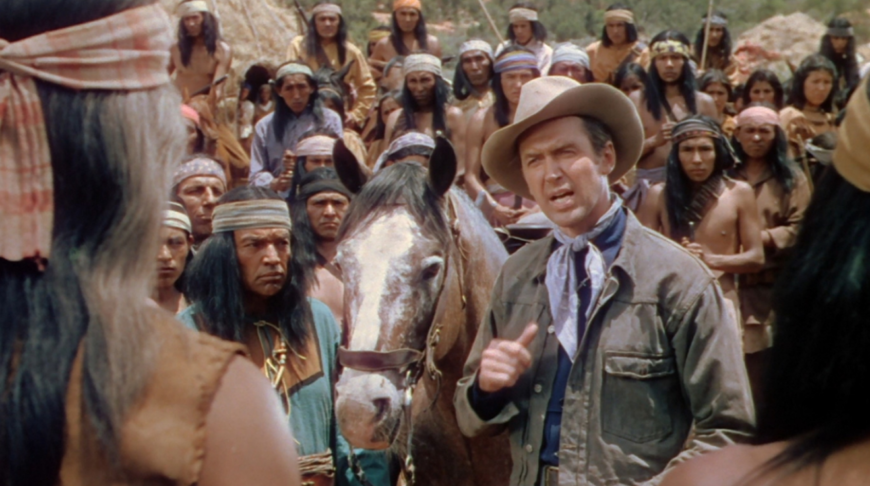 Daves’ film, a wide-eyed plea for understanding, is naive in the best sense of the word. And it is, perhaps not too ironically considering the era in which it was made, built on several big lies. The screenwriter Maltz, one of the Hollywood Ten, was blacklisted and his work wasn’t credited until decades later. His script for Broken Arrow won the Writer’s Guild award the next year but all credit went to his front, Michael Blankfort.

There were other lies, hiding in plain sight. Though Broken Arrow advances a fierce rebuke of racial injustice, two integral native American characters are played by white actors. Seen through the rose-colored glasses of the studio system circa 1950, Jeff Chandler as Cochise and the achingly pretty Paget as Sonseeahray are more than acceptable Hollywood dream factory products (the big-hearted Chandler is himself, a walking, talking monument).

But Hollywood doesn’t always have to be a fantasy factory. It can move mountains in the real world, too. And yet, with the continued whitewashing of ethnically diverse roles in films like Ridley Scott’s Exodus: Gods and Kings and Scarlett Johansson’s turn in Ghost in the Shell, moviemakers remain complicit in that big lie.

With whiplash-inducing speed, we’ve learned that elections can be won appealing to our best instincts just as easily as when they cater to the kind of ignorance that infects Broken Arrow’s racist townspeople. Until those mountains are moved, Daves’ and Stewart’s elegiac classic will remain a peace pipe dream.

Kino Lorber’s blu-ray, a bare-bones affair save for a few trailers, is a lovely thing indeed. At its best the exquisite reproduction of Ernest Palmer’s rich Technicolor photography recalls N C Wyeth’s golden-hued illustrations for our favorite adventure stories like Treasure Island and The Last of the Mohicans. Everyone buy a copy and send it to your congressman.