Joshua Oppenheimer’s documentary feature takes his earlier The Act of Killing one step further. An Indonesian optometrist dares to interview death squad leaders that half a century before murdered a million people as part of an anti-communist genocide. The eye doctor’s own brother was one of the victims. What we see sheds light on a long-suppressed outrage, smothered by a reign of terror and international indifference. 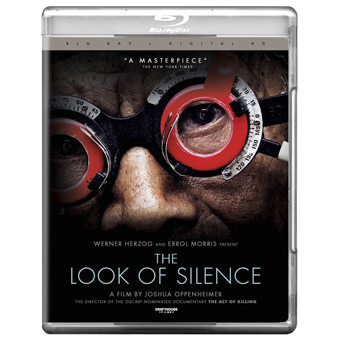 We in America truly live a sheltered First-World life, where a level of basic security is still considered the norm. But terrible events that occur beyond the reach of the news media, or that are simply inconvenient, don’t come to the public’s attention. Thus we are unaware of how our interest is interrelated with the fates of others.

Joshua Oppenheimer calls his The Look of Silence a companion film to his previous The Act of Killing from 2012. It’s less repellent than that picture, but is still an emotional ordeal. Nothing horrendous is shown, not even the fictionalized recreations seen in the first film. But the aura of death and horror is as real, and as honest, as any depiction I’ve seen. 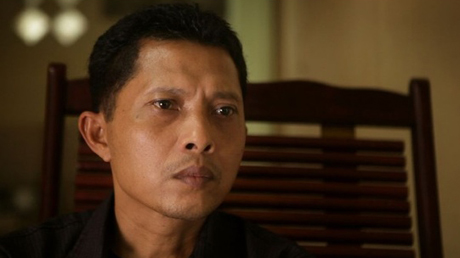 In 1965, a military takeover of Indonesia led directly to the genocidal extermination of over a million people. For the purpose of plausible deniability, the military encouraged the formation of civilian terror squads. Army troops provided security for local agents to arrest and execute communists without trial. It was an ideological cleansing on a mass scale. Opposition politicians and their supporters, pro-labor union people and “intellectuals” went first, often with their entire families. But anybody could be denounced as a communist, by almost anyone, and seized for killing. As the death squads had complete impunity, their leaders could eliminate personal enemies or people whose property they would like to possess. The reign of terror went on for over a year.

This slaughter on a mass scale was seriously underreported in the West, not only because of the military junta’s press ban, but because the U.S. approved of the anti-Communist regime. We here in the States don’t realize that much of the world has lived at one time or another in a political terror we haven’t experienced. History and reality are the property of those in power, and any questioning of the Official Story can end in personal catastrophe. It’s not that the people don’t want ‘freedom,’ but that they are powerless and terrorized.

Investigating the persecution and extermination of Jews in Occupied France in WW2, the documentary filmmaker Marcel Ophuls (The Sorrow and the Pity) had to pummel his interview subjects with leading questions to obtain even partial, veiled admissions of guilt. In Indonesia, the military dictatorship prevailed and ruled unquestioned for decades. The populace dared not associate to discuss what had happened, for fear of denunciation. Fifty years later, Joshua Oppenheimer found two leaders of separate death squads, now happy grandfathers. They’ve lived entire lives in relative ease without even being questioned for their actions. They were so comfortable that they welcomed the opportunity to regale Oppenheimer’s camera with explanations and demonstrations of how they committed mass slaughter. 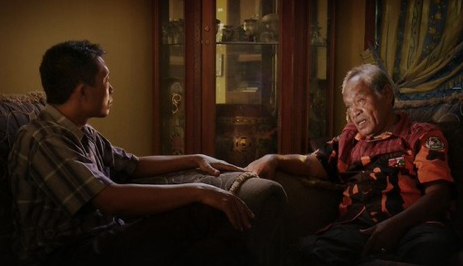 The Look of Silence follows an Indonesian optometrist named Adi Rukun, whose older brother was taken away by one of the death squads in 1965. Adi goes back home to visit his very elderly mother. His nearly blind and deaf father may be over 100 years of age. We see the mother and Adi bathe and shave the toothless old man. According to Oppenheimer, Adi became involved when The Act of Killing was being edited, and took the lead in the production of this second film. Adi is seen with his wife and daughter, and he watches scenes from the first film, of the two death squad veterans gloating about their youthful adventures. Adi ten interviews other elderly men associated with the death squads, and in one case the surviving family of a death squad leader. One, a neighbor, even tells Adi how his brother was killed. The killers are unashamed and unconcerned with what they’re admitting. In the absence of accountability, the concept of guilt does not exist.

Other people are reticent to talk about the killings, repeating over and over that the past should be forgotten. One lucky escapee from a death roundup visits Adi’s home, where Adi’s mother hugs him and cries for her other lost son. Revenge, justice and even acknowledgement of the truth is no longer important to them — a million deaths effectively erases that desire. Adi’s mother doesn’t talk to people she knows were complicit in her son’s murder, and figures that moral reckoning will occur in the next life.

Adi interviews his elderly uncle, who admits that he was a guard for the death squads. Here finally Adi gets some pushback, of the ‘you’re asking too many questions’ kind. When told of this Adi’s mother is visibly shaken. Her own brother was complicit in a secret for fifty years, and she didn’t know. Adi interviews another killer, an old man being taken care of by his sweet and friendly granddaughter. We see the emotions flow over the face of the granddaughter, as she learns that the man she loves did these terrible things. She was born twenty years later, but she apologizes to Adi.

Adi interviews the widow of one of the death squad leaders from the first film. She seems surprised, unaware of everything, even of a homemade book her husband wrote and illustrated bragging about his exploits as a mass executioner. Her sons want the interview ended, but Adi persists. He plays back some of the footage of her husband, smiling as he displays his book for the camera. The wife is standing at his side, proudly. 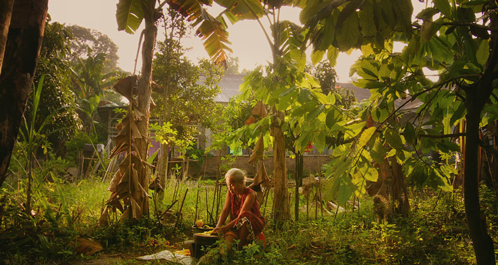 Adi carefully carefully withholds his own emotional reactions. Early in the show, his daughter reports that her teacher said the evil communists had to be gotten rid of because they did bad things. Adi finally interviews some kind of fat-cat local politician, who becomes quietly sinister when the questions become direct. Although he boasts about being in charge, he denies responsibility for anything. He then suggests in no uncertain terms that ‘It could all happen again’, especially to people so offensive as to do what Adi is doing. This opportunistic, venal monster makes one’s skin crawl even more than did the various human slugs defending Klaus Barbie in Marcel Ophuls’ Hôtel Terminus. This optometrist Adi is a remarkably controlled fellow.

What justifies mass murder to the death squad leaders? They all say that Communists don’t go to church, that they are evil, that the mass slaying was a popular uprising. With a denunciation being sufficient to insure death, there must have been a rush to inform on the neighbors before they can inform on you. The politician insists that he helped carry out the Will of the People. The death squad men consider themselves heroes. They report that cutting throats and hacking off heads and genitals was a terribly tough job, even if they act as if they enjoyed it. It was apparently the custom to collect the blood of the victims in glasses, and then drink it for some atavistic, primitive benefit of spiritual approval or protection. They are literal vampires.

The documentary doesn’t stress that the U.S. aided the anti-communist military coup to stop the spread of communism. But more than once, we hear a witness justify the mass killing as something approved of and encouraged by the Americans. Is that just another lie, or did the genocide come about as a side effect of foreign policy?

Joshua Oppenheimer’s documentary plays out in a beautiful rural locale. We keep returning to the river where the killings took place. In the file footage, the squad leader says that people didn’t eat fish from the river for a while, because of all the human corpses disposed there.

The Look of Silence is potent filmmaking. One problem with docus on atrocities and mass killings is that sensitive or complacent people prefer to ignore them, while the morbidly interested watch for the wrong reasons. Oppenheimer’s movie is a challenging experience that avoids the shock angle and concentrates on positive images – do Adi’s children deserve to live in a society founded on terror?   I’m happy that somebody is carrying on the effective, compelling historical/moral documentation pioneered by filmmakers like Marcel Ophuls and Claude Lanzmann.

Drafthouse / Cinedigm Films’ Blu-ray + Digital HD of The Look of Silence is a fine disc of Joshua Oppenheimer’s documentary. It’s a testimony to the fine quality now available even to amateur filmmakers. The advantages of digital filmmaking certainly give Oppenheimer an advantage over Ophul’s vintage shows, where an important interview might be filmed with a malfunctioning 16mm camera. Oppenheimer and ‘Adi’ set up several cameras for each interview, and somebody took care with how things were lit. The images and the audio are carefully crafted right down the line. Some of the scenes with Adi and his family are semi-staged, but the only one that seems completely so is a discussion he and his wife have on their doorstep. Oppenheimer uses a very simple shooting style. He does fixate more than once images of a kind of bean that has a live larva inside, and hops about like a Mexican Jumping Bean. Adi’s mother keeps them for her grandchildren to play with. I should think the beans symbolize imprisoned truth, life trying to escape confinement.

An insert sheet carries the code for an HD digital download version.

Drafthouse’s disc contains a wealth of extras. On the audio commentary executive producer Errol Morris helps director Oppenheimer discuss the complicated making of the film — I hope I haven’t misstated any of the details. Another worthy extra shows the other executive producer Werner Herzog interviewing Oppenheimer at a Q&A at the Berlin Film Festival. A third ‘discussion’ with Oppenheimer is included as well. Footage from the Indonesian premiere shows Adi Rukun publicly talking about the film. It’s apparently being seen widely in its home country, which makes us concerned — does that politician have the wherewithal to retaliate? Even Adi’s mother voices her concern about Adi’s safety.

I’m very happy that filmmakers like Oppenheimer can be heard and seen when the subject matter is something this important. Kudos also to Herzog and Morris for taking on the cause.