Hitchcock’s first self-professed ‘Hitch’ picture is still a winner. Many of his recurring themes are present, and some of his visual fluidity – in this finely tuned commercial ‘shock’ movie with witty visual tricks from Hitchcock’s own background as an art director. And hey, he secured a real box office name to star as the mysterious maybe-slayer, ‘The Avenger.’ 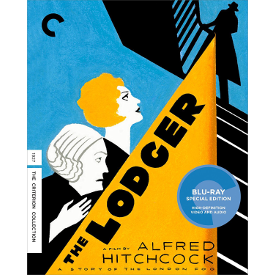 Alfred Hitchcock became the most notable English film director for all the right reasons — he was talented and creative, and inquisitive about new ways to tell stories. He was exposed to some of the most creative filmmakers in the world when he worked in Germany, and he had plenty of help throughout his career from Alma Reville. For years I thought that Hitchcock didn’t acknowledge the contributions of the fine writers of his films, especially in the Hitchcock/Truffaut book, where it seems that “I” did everything. Happily, listening to the actual uncut tapes of those interview sessions, we learn that Hitch often spoke up with the names of his writers and source authors, even spelling their names so Truffaut will get them right. Hitchcock never lacked a talent for self-promotion, but he’s not quite the credit hog I once thought he was. 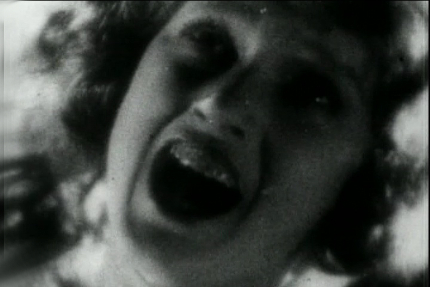 Hitchcock’s breakthrough silent suspense shocker The Lodger: A Story of the London Fog has been released in some okay home video versions, but this restoration gives us the benefit of a 2012 restoration organized by the BFI.

We wonder if Hitchcock was yet aware that he was perfectly suited for kind of story, or if he had already been trying to get murder mystery ideas through the front office at the Gainsborough studio. A Ripper-like fiend is murdering blondes on the streets of London, and leaving calling-card notes crediting the crimes to ‘The Avenger.’ At a certain boarding house beautiful Daisy (June Tripp) doesn’t share the fears of her parents, the landlords. Daisy’s over-eager suitor Joe (Malcolm Keen) is a detective working on the case. Then ‘the lodger’ shows up, a mystery man dressed in black and wearing a scarf over the bottom half of his face (Ivor Novello). Only June seems to like the fellow, who says little about himself. But the landlords become suspicious when he goes out at night, just as additional murders occur. In the terrorized city, almost anything could happen.

In some respects The Lodger goes against the Hitchcock norm. Everything’s fairly realistic until the entrance of the lodger, at which point Hitchcock reverts to heavy stylization. The lodger moves unnaturally slowly, for chilling effect; framed in the boarding house’s doorway, his entrance seems patterned after images in Murnau’s Nosferatu. And Hitchcock would later steer away from purposely obfuscating basic information, as he does here. Ivor Novello’s lodger behaves in a strongly guilty manner through most of the movie, which undercuts the revelations of the last couple of reels. 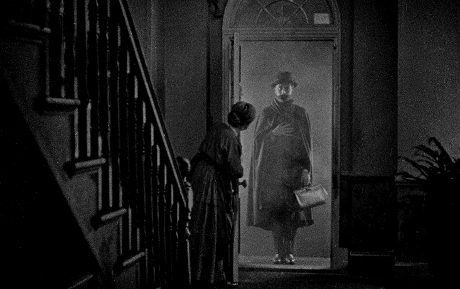 Starting more or less in the mid-1930s Hitchcock would learn (or was taught by his writer-collaborators) the cinematic magic of point-of-view subjectivity, which immerses us in a cinematic first-person experience. In The Lodger the POV changes constantly, for the convenience of storytelling. We don’t really identify with any of the players, unlike a film such as Sabotage, where the best scenes align us intensely with the plight of Sylvia Sydney. Most of Hitchcock’s masterpieces play ever more sophisticated variations on his subjective camera technique. Our identification with Marion Crane in Psycho is so complete that her exit from the story becomes a near-cosmic meditation on the meaning of death.

In terms of content-based personal themes The Lodger plays like a critic’s collection of ‘Alfie’s Greatest Hits.’ The idea of a killer that targets only blondes is probably a coincidence, unless Hitchcock relished the idea of working with several blonde actresses playing the victims. The notion of the innocent man suspected of a crime is certainly here, although it’s the film’s most awkward aspect. The lodger is indeed intimately ‘related’ to the crime spree, but the eventual reveal of his back-story is real penny-dreadful stuff. Hitchcock uses Ivor Novello mostly as a cipher. The early visuals type him as a vampire type, but after Hitchcock’s treatment does a flip-flop, Novello’s lodger transforms into a Christ figure, persecuted by an angry mob and figuratively crucified on an iron fence.

The Truffaut book was eager to point out whenever Hitchcock used visual tricks to enliven his story. Made the same year, the director’s silent The Ring tells its story of a rivalry between boxers with an almost unbroken string of visual gags. Taking the place of title cards with verbal dialogue, they also suggest sound effects that of course are not there. The screenwriter of The Ring was Alma Reville, which makes us wonder how much her sense of humor and fun played in these inventions.

In film school these clever storytelling setups were what made Hitchcock unique; they communicated to the average student that filmmaking was a chance to be devilishly clever. Hitchcock’s tricks suggested a reality behind surface appearances, while elevating the director to genius status. They started almost as cartoon gags of the kind that Hitchcock might think up for a silent movie inter-title. The big example is the view of the back of a car, in which the silhouhettes of the heads of the passengers look like the eyes of a face — it’s a fairly meaningless visual gag. 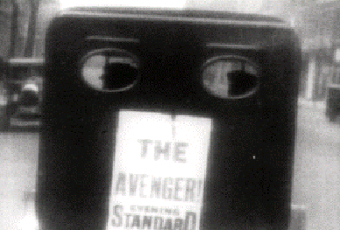 In Hitchcock we rarely have to wait long before another display of this kind of brilliance: the subjective audio emphasis on the word ‘knife’ in Sabotage, the scream turning into a train whistle in The 39 Steps, the umbrellas that show the path of a fleeing assassin in Foreign Correspondent. Small but crucial objects are given outsized emphasis, sharing huge close-ups with the stars. Later on Hitchcock’s visual metaphors become profound. In Vertigo and Psycho the spiraling motions into round objects — a curl in a hairstyle, a bathtub drain — become portals into obsession, or death. Hitchcock is only indirectly a surrealist. He’s relentlessly commercial, yet manipulates his visuals with more cinematic dexterity than any experimental filmmaker.

I don’t think I realized this until I saw the 1928 A Cottage on Dartmoor directed by Anthony Asquith. Without impairing the story, practically every shot contains a visual gag of one kind or another, maintaining audience interest on a second level. Even if the dramatics aren’t working, the cleverness of the visual tricks is overwhelming — we’re constantly being entertained by the side jokes and ironies. Cottage takes the visual pun idea to near-absurd lengths.

We’re told that Hitchcock thought that he’d “gone too far” in The Lodger when he went to the extravagant extreme of replacing the ceiling of a set with a piece of glass. The landlady stares upward, listening to something from above. The ceiling ‘dissolves’ so that we see the lodger pacing back and forth. She hears his footsteps, and Hitchcock shows us what she imagines to be happening above. We know that she’s thinking about nothing else, and feeling the growing fear. A silent theater organist or orchestra would surely supply musical footsteps, completing the illusion that we’re seeing images from the landlady’s mind. A talking picture might pan back and forth across the ceiling, while we hear exaggerated footsteps and perhaps see a lighting fixture tremble with each step. It’s an interesting though puzzle: the disappearing floor is a ‘magic’ un-real special effect, yet it facilitates a stylized psychological realism.

Modern horror fans will be impressed by what were then shocking images for the murders. A stylized, heavily filtered close-up of a screaming victim is the first thing we see. We never see a knife, as in Pandora’s Box, but oddly-angled shots of motionless victims on the cobblestones have an erotic charge similar to images in giallo slasher thrillers made thirty years later. As there are no stalking scenes or on-screen killings per se, the murders are seen in the mirror of public reaction. Crowds gather in the night fog to stare at the corpses, allowing Hitchcock to use people and faces as props and set dressing. As in many later Hitchcock pictures, the public in general is not to be trusted. The mob preparing to beat the lodger to death is later echoed in the complacent, unconcerned or contemptuous ‘crowd’ behavior in Hitchcock’s The 39 Steps,, Strangers on a Train, I Confess, etc.

Elsewhere Hitchcock and Gainsborough give the show plenty of variety. Daisy and Joe have some light comedy romance business in the kitchen, again amplified with a Hitchcock cartoon-play: fun with some dough and a heart-shaped cookie cutter. We also get a fairly revealing bath scene with Daisy, just for ‘general interest.’ I can’t remember a single distinguishing character trait for daisy, but she makes a fine Blonde in a Bath.

The excellent extras clue us in to why Hitchcock wasn’t running wild with film ideas and daring content — his own Gainsborough brass had no tolerance for his artsy storytelling (!) and the word was that the story made no sense (!!). But editor Ivor Montagu eventually was told to thin out the title cards and add some animation in the main titles, and Hitchcock’s show went out more or less as he made it. It was soon heralded as the best English movie yet made.

The Criterion Collection’s Blu-ray of The Lodger: A Story of the London Fog is a fine encoding that pulls out more detail than I’ve seen before, with a stable picture and clean splice cuts that don’t jump. Cameraman Gaetano di Ventimiglia puts many shots through fog filters, which the HD encoding renders better than older NTSC scans. The animation in the titles looks sharp and stable, and the color tints seen throughout the movie are bright and effective. Neil Brand’s new music score is performed by the Orchestra of Saint Paul’s and presented in uncompressed stereo. 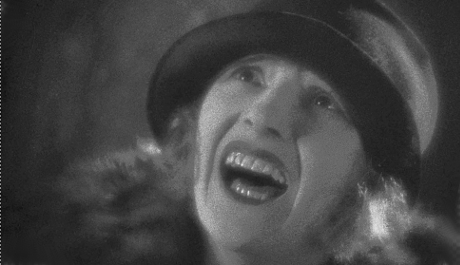 Also present is Downhill, an entire second Hitchcock feature which he enlivens with his visual storytelling ideas, such as having the hero metaphorically ‘descend’ with each step of his social degradation. Matinee idol Ivor Novello is again the star, cast as a teenager who takes the blame for the crime of a friend, is cast from his home and victimized by a succession of women. The cheap story crudely blames the women for everything, but the picture’s visual surface displays a lot of sophistication. Downhill is given the same fine restoration (2K) as The Lodger, and a piano score by Brand.

Essayist Philip Kemp’s insert liner notes are a fine introduction to The Lodger and offer an especially good analysis of Downhill. Although the second film is not a Hitchcock-style subject, Kemp finds a lot of interest in it for Hitchcock fans.