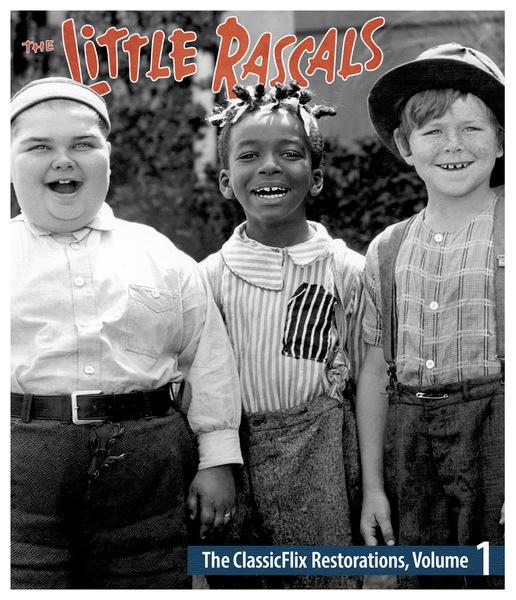 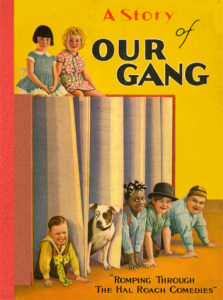 An epic celebration of the American melting pot, E. L. Doctorow’s Ragtime ends with a beginning; an immigrant named Tateh escapes the tenements to produce a string of comedies about mischievous slum kids. It’s a fitting, if fanciful, origin story for Hal Roach’s own series of films featuring footloose small fry; visions of ethnic harmony as idealistic as Tateh himself. Roach’s world view was formed during his early adventures as a jack of all trades—mule skinner, iron worker, and miner. And though he ended up as a movie producer he remained a prospector—one day, thanks to some bickering children, he struck gold. The dispute was playing out in a lumberyard across from Roach’s office where he watched, impressed by the kids’ dogged determination but also inspired by their exuberance—they were natural comedians. By the time the argument ended it had transformed into a full-fledged comedy routine. Eureka, The Little Rascals were born. 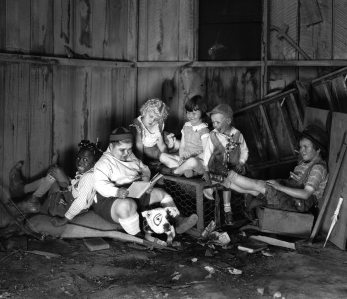 But before they were the Rascals they were Our Gang, cogs in the Roach machine who began their tenure as tots and retired as middle-schoolers. The films, usually 20 minutes in length, began production in 1922 and delivered to theaters what Roach observed in that lumberyard—dirt poor kids doing what kids do; bully or be bullied, fall in and out of love (usually with the dazzling schoolteacher), fight friends and play with enemies (the villainous “Butch”, played by Tommy Bond, began his Gang career as a lovable crooner). Filmed in and around Culver City, the films displayed few of the usual embellishments of a typical movie production. The adventures took place in tiny backyards, weed-filled lots, and abandoned houses. If the exteriors were notable for their plainness, the interiors were even more starkly appointed; sparely furnished parlors, spartan kitchens, and dingy bedrooms—as dressed down as the painted backdrops of a vaudeville show. This was a neo-realist approach to kindergarten, the scenarios were Dickensian but the mood was carefree—Shoeshine with laughs. Leroy Shields’s theme song was called “Good Old Days”and the children were the reason why. 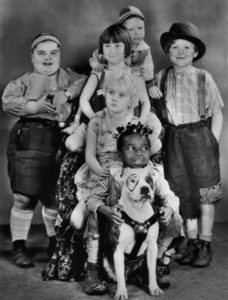 Many of the kids Roach signed weren’t professionals in the usual sense but they prevailed with their own brand of method acting; their behavior mirrored the gawky inquisitiveness of real youngsters on the hunt for fun. Most were fresh from the nursery and recruited for their quick reactions and natural demeanor. But their physical appearance, especially in the early silent productions like The Champeen and High Society, was key to the success of the films. Clad in ill-fitting hand-me-downs that suggested a hobo’s wardrobe, the gang resembled live-action versions of the young trouble-makers found in contemporary newspaper strips: Frank Crane’s Muggs, about a street urchin’s daily run-ins with a friendly cop, and the Bowery adventures of Richard Outcault’s The Yellow Kid. Perhaps the most conspicuous influence also came from Outcault; 1900’s Pore Li’l Mose, the first newspaper strip to star an African-American child. 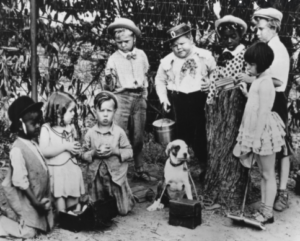 Comic strip creators laid the groundwork and Roach followed suit, casting black children in leading roles shoulder to shoulder with their white playmates. But though conceived with the best of intentions, Roach created a balancing act that was never truly balanced. Young performers like Ernie Morrison as “Sunshine Sammy”and Allen Hoskins as “Farina”, so integral to the Rascals’s durability were also, inevitably, a constant target of the racist humor found in storylines written by soon-to-be Hollywood powerhouses including Frank Capra, Leo McCarey, and Frank Tashlin. But for better or worse, black, white, brown, male and female, canines and kitties, membership in Our Gang was open to all comers. In tribute to outsized comedians like Fatty Arbuckle were Joe Cobb and Norman Chaney (Chubby), genteel young men memorable for their resemblance to Russian nesting dolls. There was the eternally confused (and perhaps hard of hearing) little Dorothy DeBorba (Chubby: If love is like a rose, I will pick my rose in the bud. Dorothy: If love is like a rose, I will stick my nose in the mud), and the flinty Mary Ann Jackson, a pint-sized version of hard boiled pre-code dames like Barbara Stanwyck and Glenda Farrell. Perhaps the most unformed gangster—and hence the most believable in his element, was 8 year old Bobby Hutchins as “Wheezer”—despite his just-hatched attitude, Hutchins was a trooper, eventually appearing in 58 films in the series. 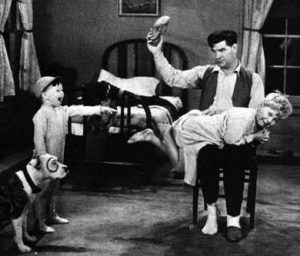 Jackie Cooper and Leon Janney were the odd men out because of their indisputably adult skill sets—each were preternaturally polished performers (though Janney made for a pretty ho-hum Hoosier in 1931’s Penrod and Sam). Cooper himself broke from the pack in a big way, starring in well over a hundred movies and TV series. Until he grew too old for the part, it was Hoskins who ruled the roost—his low energy/high anxiety schtick made him an audience favorite and his paycheck reflected it—in 1933 he was the highest paid scene stealer in the troupe. Black or white, the most popular rascals, superseding even Pete the Pup, were Carl Switzer, a string bean yodeler from Illinois, and George McFarland, a cherubic wise guy with a nose for trouble. McFarland was known as “Spanky” and made his first appearance in 1932’s Free Eats. Switzer, given the name “Alfalfa” as a sop to his farmland origins, debuted in 1935’s Beginner’s Luck. They were a natural team and soon the de facto leaders of the Rascals. 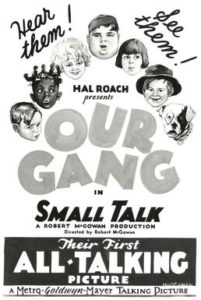 The Little Rascals Volume 1, a new Blu ray release from ClassicFlix, begins with Small Talk made in 1929 and wraps up with A Tough Winter produced in 1930—so Spanky and Alfalfa will just have to wait their turn. The set features 11 of the gang’s most distinctive early sound adventures, eight of them directed by Robert F. McGowan, a filmmaker of limited means but known for his supernatural rapport with toddlers. Those kids responded with hilarious and heartbreaking moments tailor-made for Small Talk, a melodramatic farce about desperate children and the kindness of strangers. Cobb, Hoskins, and Mary Ann play orphans with the good fortune to be adopted by inordinately charitable society matrons—save for Farina whose skin leaves him out of the running (he’s rescued by the maid of the house in the cringe-inducing finale). Produced the same year, Lazy Days more than lives up to its title; Farina remains as one with his hammock while Chubby rounds up the gang for a beautiful baby contest. It’s a leisurely day in the park, wistfully evoking the childhood pleasure of having nothing to do and plenty of time to do it. 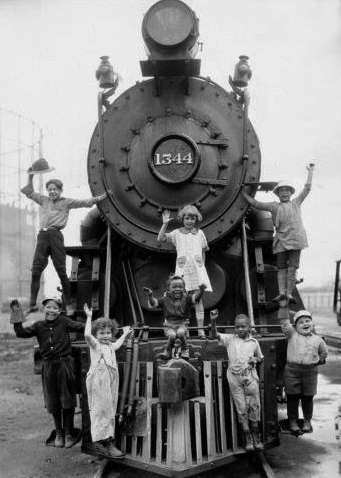 Almost as laconic and just as endearing, Bouncing Babies is Bobby Hutchins’s finest 20 minutes—with a new baby in the house and no longer the center of attention, Wheezer is set on revenge. He grabs the stroller and sets off to trade in his little brother for–what else–a new goat. Wheezer’s long trek to the nursery shines a light on his resourcefulness—he stops traffic at a busy intersection by chucking light bulbs into the crossing—as drivers inspect their tires, the industrious kiddo sallies right by. If Lazy Days and Bouncing Babies mosey along, Railroadin’ is supercharged, The Road Warrior of Our Gang comedies.

An action-packed thriller taking place in and around a pair of runaway trains, Railroadin’ is one cliffhanger after another with poor Farina the focal point of the danger (even the special effects are terrifying). McGowan’s work is faster-paced than usual (by a long shot) and all hail the editing department, headed by Richard C. Currier—the man who cut Laurel and Hardy’s The Music Box and W.C. Fields’s Man on the Flying Trapeze. The Rascals in action mode—usually sped up like Mack Sennett’s Keystone Kops—are always a treat but none of their outings were as visceral as the scare comedies like Spooky Hooky, Hide and Shriek, and the nightmare-inducing Spook Spoofing. Moan and Groan Inc. was the first sound film in this hair-raising sub genre, a weird romp crowded with the usual haunted house tropes including hidden passageways and a shadowy, and possibly homicidal, basket case. The final Rascals release of 1929, the jumpfest co-stars Edgar Kennedy in his recurring role as Kennedy the Cop, a perennial fall guy who ofttimes took precedence over the kids. Directed by James W. Horne, Kennedy leads the way in When the Wind Blows, an atmospheric night on the town for Jackie who finds himself locked out of doors late one evening, sans pants and confronting a cat burglar. 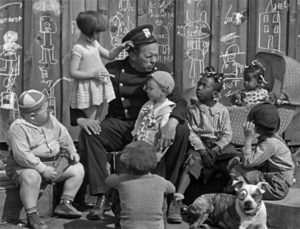 A grudge match between Joe Cobb and Chubb rings the bell for Boxing Gloves, a knockabout farce notable for Cooper’s first credited film appearance while Shivering Shakespeare, directed by Anthony Mack, takes place in a more cultured venue, the theater, where the gang does their best to live down to the classics. The snowbound A Tough Winter features Mary and the crew in a calamitous taffy pull with a poignant (meaning not very funny) appearance from Stepin Fetchit. Bear Hunters, with the kids making like Ramar of the Jungle, gives Janney one of the most memorable lines in the history of the series and an all-purpose excuse to any unwanted dinner invitation: “I can’t go, I have to stay home and grease Wheezer.”

ClassicFlix have gone the distance with these restorations and the results are splendid. They worked with the original nitrate film elements when available and it shows; film damage is almost nonexistent and the detail is dazzling. The disc features a couple of extras, a high definition trailer for 1939’s Zenobia starring Oliver Hardy and a short feature on the Rascal Restoration. Specializing in Blu rays for Boomers, ClassicFlix has Volume Two of the rascals on the horizon containing, saints be praised, Helping Grandma, Fly My Kite, and the first appearance of that immemorial heartthrob, Miss Crabtree, in 1930’s Teacher’s Pet. But wait, there’s more—the company is also gearing up for a Blu ray set of the first season of The Abbott and Costello Show. Here’s Glenn Kenny with a profile of ClassicFlix from 2017.