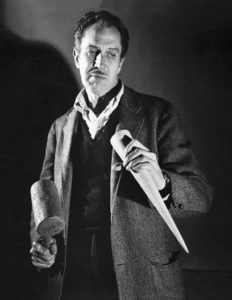 The Last Man on Earth is the very definition of a one-man show—Vincent Price stars as a lonesome medico who isn’t lacking for company—it’s just the wrong kind: each night he’s visited by zombie bloodsuckers on the prowl for a midnight snack, victims of a plague that has decimated the planet. An American/Italian co-production directed by Sidney Salkow and Ubaldo Ragona, the 1964 film was based on Richard Matheson’s I Am Legend about the desolate existence of scientist Robert Morgan who, when he’s not engrossed in teary-eyed conversations with the mirror or howling into the void, is working to find a cure for the mysterious virus that’s killed every one of his family and friends. Though the film is the work of two directors and a divergent crew, the movie has a distinctly unified look—Salkow directed Price in Twice Told Tales, notable for its uncommonly drab appearance (the filmmaker tolled mainly in television; everything from Hawaiian Eye to The Addams Family) so the producers for Last Man were lucky to have Franco Delli Colli as the cinematographer and Hollywood veteran Gene Ruggiero as the editor—thanks to the Rome locales, in particular the intimidating vistas of the EUR district, those artists turn The Last Man on Earth into a horror movie with the immediacy of a documentary—it recalls 1959’s The World the Flesh and the Devil and predicts 1968’s Night of the Living Dead; visionary takes on a coming apocalypse that has haunted the collective consciousness since Noah built the ark. 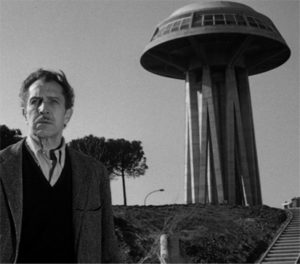 The EUR or Esposizione Universale Roma—was meant to be the site for the 1942 World’s Fair, a project spearheaded by Benito Mussolini who conceived the spectacle as a celebration of twenty years of fascism. World War II got in the way of the prime minister’s plans. Still, Rome’s landscape was changed forever—Mussolini had hired some of Italy’s greatest architects (fascists used to hire the best artists), including Giovanni Guerrini, Ernesto La Padula, and Mario Romano, to design the complex that would eventually give Salkow’s 1964 production its staying power. Current day movie fans living out a real world version of Morgan’s plight—isolated because of the Coronavirus and consumed by the deadening sameness of the days and nights—might shy away from an experience that seems all too familiar—but even with its flaws (and there are more than a few), the movie is worth a look. The black and white images of a ravaged countryside surrounded by otherworldly skyscrapers are so compelling that the film sometimes musters the primitive power of a silent movie. The lack of sound certainly would have tempered Price’s showboating performance which—at its most agitated—is reminiscent of his overwrought theatrics in the Poe films. When the solitary scientist wanders the landscape, burning bodies, staking sleeping vampires, and pillaging empty supermarkets, Salkow’s movie finds its footing but when Morgan returns to home, the constant voice overs and awkward flashbacks to happier days make for less than intriguing entertainment. 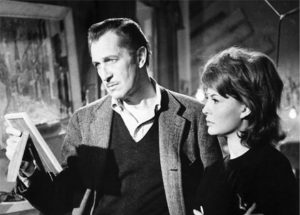 Though Matheson was unhappy with the finished product (he called the film “inept” and used a pen name for his credit line), he hews closely to his original story, including a provocative subplot involving the third act appearance of a young woman, a wandering soul who appears to be immune to the virus. She is in fact part of a rebel faction, half-zombie, half-human, and, like Morgan, carrying unique antibodies that suppress the virus. Matheson’s screenplay veers from his original ending in which his hero’s death, like Scott Carey’s in The Shrinking Man, takes on a religious dimension—they ascend to another plane to become “Legend.” Price on the other hand is gunned down by the disbelieving malcontents on—klutzy metaphor alert—a church’s altar.

Kino Lorber’s new Blu ray is an excellent reproduction of Delli Colli’s work. They’ve included a feature length commentary from Richard Harland Smith, an alternate ending for the film, and a boatload of trailers including Last Man‘s Italian release trailer and an interview with Matheson, Richard Matheson: Storyteller. Also making an appearance is Joe Dante with his Trailers From Hell! commentary on the film.