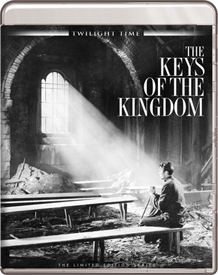 The Twilight Time label has access to much of the Fox library, and draws from the vault what’s been fully restored and what’s not already claimed elsewhere. Accompanying their UA- sourced disc of Joseph L. Mankiewicz’s The Barefoot Contessa is a 1944 Fox release from the writer-director-producer, a big studio production directed in this case by John M. Stahl. The Keys of the Kingdom is exactly the kind of disc release not to be given wide coverage, and that’s why I chose it. Golden-age Hollywood had a bad habit of interjecting religious themes into movies, but when they took on church-oriented stories directly, they did much better. 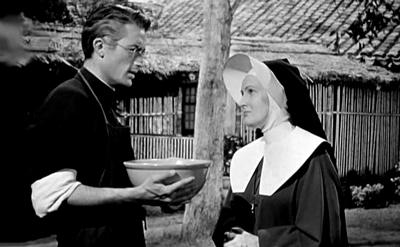 One of the better studio films with a religious theme is this epic-length (for 1944) version of the A.J. Cronin novel about a Scottish missionary’s life in China. Fox had done extremely well the previous year with The Song of Bernadette, which made an instant star of Jennifer Jones. Religious films made money, launched stars and earned Oscars. Other studios leaped into the fray as well, resulting in the Oscar winner Going My Way.

The Keys of the Kingdom contains no narrative surprises but shows discretion, taste and class thanks to the writing of producer Joseph L. Mankiewicz, who re-worked Nunnally Johnson’s original script. Although it was the second starring film role for tyro Gregory Peck, it was his first movie released and he earned an Academy Award nomination. With Jennifer Jones and Gregory Peck, Fox had a two for two success rate, creating new screen stars. 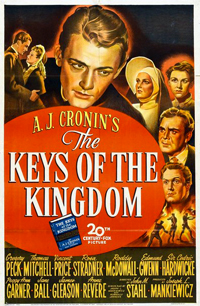 In 1938, the Monsignor of Tweedside, Scotland (Cedric Hardwicke) comes to tell elderly Father Francis Chisholm (Gregory Peck) that he’s being removed from his parish for unreliability. But Monsignor stays up all night reading Father Chisholm’s diary. Fifty years earlier, the parents of young Francis (Roddy McDowall) are drowned in a river after an anti-Catholic assault. The boy is raised by his Aunt Polly (Edith Barrett of I Walked With a Zombie) and hopes to marry young Nora. Events cause him to instead become a priest. At first Francis is woefully ineffectual. His mentor Father Hamish MacNabb (Edmund Gwenn) sends him to China, where he’ll hopefully do better fighting real problems instead of butting heads with the legalistic church bureaucrats MacNabb calls ‘ecclesiastical mechanics.’

In China Chisholm must begin in a single room but does well when he takes on a dedicated follower named Joseph (Benson Fong). Then Chisholm uses rudimentary medicine to save the life of the son of an influential merchant, Mr. Chia (Leonard Strong). Chia eventually gives Chisholm land and builds him a regular mission outpost with a church, dispensary and school. Nuns come from Europe to help, but Father Chisholm is disappointed when their leader, Reverend Mother Maria-Veronica (Rosa Stradner) is hostile and unfriendly. Chisholm’s old Scottish friend Doctor Willie Tulloch (Thomas Mitchell) visits just in time to help when the local town is caught in a war between nationalists and imperialists. To save the mission and his many new Christian converts, Father Chisholm helps nationalist Lt. Shon (Richard Loo) destroy an enemy gun. Later, Father Chisholm’s old friend, the politically adroit Father Angus Mealey (Vincent Price) pays an unpleasant visit. After he’s gone, Reverend Mother Maria-Veronica declares that she was wrong, that Father Chisholm is a fine priest. When he turns old and gray, and when Joseph has grown children, Father Chisholm reluctantly returns to Scotland. 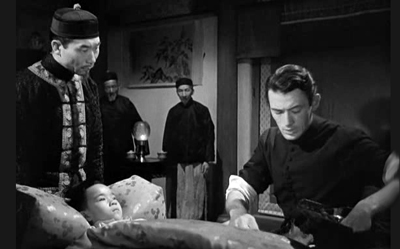 The Keys of the Kingdom has all the necessary elements and touches all the proper bases to attract a heavenly box office. Young Father Chisholm is devout and well meaning but questions Catholic credos — why people of other faiths should be denied entry into the Kingdom of God, why God would punish an atheist, etc. Francis’ formative debacles are the death of his parents due to a hate crime, and a bad business involving a woman. He is disappointed by a failed love that we barely see — the unhappy Nora has a baby out of wedlock and then kills herself, and we don’t know if it’s because she had a complete breakdown of faith in herself and Francis or if Aunt Polly made life unbearable for her. The movie lets this issue drop. We’re never told if Nora was weak, corrupt, mentally unstable or just unlucky. Her illegitimate child matures and also ‘goes bad,’ but that subplot is kept unseen, off-screen. 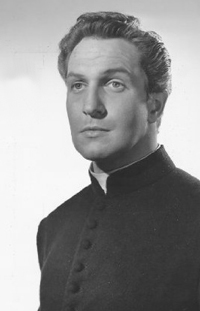 No, fate and Father MacNabb have decided that Francis’ future is in the priesthood. MacNabb recognizes the young man’s early failures as evidence of strong virtues and gives him the big missionary job on the other side of the world. Missionary work, Catholic or Protestant, was so risky and tough that we wonder exactly what MacNabb was thinking. Even the Protestant missionaries in Hawaii are chosen for toughness, and are certainly not sent out alone.

Father Chisholm’s experience in China is of course a miracle of hard work, luck and inspiration. With only one follower, Francis accepts an abandoned child (one would think the streets would be crowded with starving children) but refuses a hollow offer from an influential man in his debt to become a convert. Father Chisholm’s ethics pay off again and again, even if it takes years to see good results. The prejudiced German head Nun snubs Francis for years, until she finally sees the light.

It should be obvious by now that The Keys of the Kingdom assumes that being a Christian is the normal state of affairs. Yet it has no scenes of conversions easily bought and it doesn’t confuse issues of faith with ideas of class, race or politics. It’s actually very good in suggesting that Francis’ Catholic Church superiors work in a competitive world of influence that favors advancement for an insincere smoothie like Vincent Price’s Angus Mealey. The system is basically sound, we’re to understand, because good men like the gruff Monsignor can be righteously influenced when they are aware of the truth. 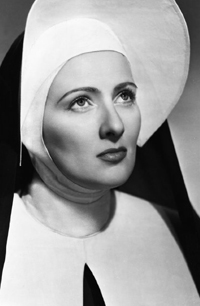 Like many movies about missionaries (The Inn of the Sixth Happiness) or even Westerners in Asia (Anna and the King of Siam), The Keys of the Kingdom shows Father Chisholm assuming a moral leadership role during medical crises and other social disturbances. When civil war threatens, the rich Mr. Chia flees for the hills, giving us the notion that Francis’ mission is the only responsible civic organization still functioning. When push comes to shove, Father Chisolm stops begging for permission to aid the wounded and instead takes an active military role. It’s interesting that when Francis takes one side of a conflict (to defend the poor) the audience’s approval is assured. In the real world of today, activist missionaries fighting for the rights of indigenous populations are more likely to be targeted by both sides, even the conservative ‘Christian’ forces.

Gregory Peck is handsome and earnest in his first big role, and Rosa Stradner (Mankiewicz’s wife) does well in her limited part. They have a church-acceptable emotional parting scene that goes as far as it can without implying a state of suppressed romance. Thomas Mitchell is fine as the dear doctor friend who happens to be an outspoken atheist, a bad mark on Father Chisholm’s record that bothers him not one bit. In the film’s further push toward universal tolerance, James Gleason and Anne Revere play a Methodist missionary couple delighted to find Father Chisholm to be open-minded and friendly. This is a little more palatable than the outright fantasy in John Ford’s The Quiet Man of an Ireland with Protestants and Catholics helping each other and promoting harmony.

The Keys of the Kingdom now seems all the more dated, after decades of trashy dramas focusing on priests and nuns breaking their vows, and even worse sex scandals in the Church. I’m sure that other negative thoughts will surface when viewers see Father Chisholm accept a tiny girl tot named Anna (Eunace Soo-Hoo) as his ward. With the world the way it is today, is all the more reason to behave with the best standards we can find, old or new.

The Twilight Time Blu-ray of The Keys of the Kingdom is a major boost for this quality picture from seventy years ago. Not exactly a sexy subject for disc sales, the show will have to attract viewers that know of the superior work of co-writer Mankiewicz. It’s also interesting to see how Gregory Peck first connected with audiences. Okay, so he wasn’t the most versatile actor ever, but he had fine taste in roles and never seemed less than committed to a part. Bankability didn’t hurt either. He became an instant heartthrob. You know that a star has made his mark in history when the Broadway show Damn Yankees shows two middle-aged women clearly sexually excited about, ‘going down to the station to watch Gregory Peck come in on the train.’ 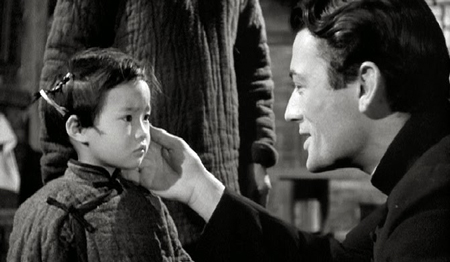 Fox needs to dig into its ’30s pictures more, or at least make them more available, but in general they take great care with their library. The Keys of the Kingdom looks sensational in B&W, especially when it was made under wartime hardships. Excellent art direction creates a China on the then-enormous Fox back lot in West Los Angeles. The high quality audio track also flatters Alfred Newman’s music score, which is auditable on a track of its own. The only reason to keep the older (2006) DVD is for its alternate audio tracks in Spanish and French.

TT retains the trailer from the old Fox disc, and a commentary track with Mankiewicz biographer Kenneth Geist and the writer/producer’s son, Chris Mankiewicz. It’s not a particularly good commentary. Chris mumbles and offers half-hearted opinions, saying he knows nothing about the history of Catholics as presented by Hollywood, before going into an inconsequential discussion of the subject. Mr. Geist gives us some fine background on the famous writer and director but makes odd small errors, like saying that Edmund Gwenn died in 1949, or that Inn of the Sixth Happiness was filmed in China. We don’t learn much about director John M. Stahl except that he made a lot of 1930s weepies (cue list of films) that were re-made by Douglas Sirk in the 1950s (cue list of films). The track is so sparse that one sometimes must scan for a minute to get to the next patch of commentary.

Compensating mightily is Julie Kirgo’s liner note essay, which brings to light dozens of interesting observations about author A.J. Cronin, Gregory Peck, and actress Rose Stradner. Kirgo places Hollywood’s major love affair with religion-themed movies as beginning with the war and ‘breaking only on the shoals of the 1960s.’ That sounds exactly right to me.