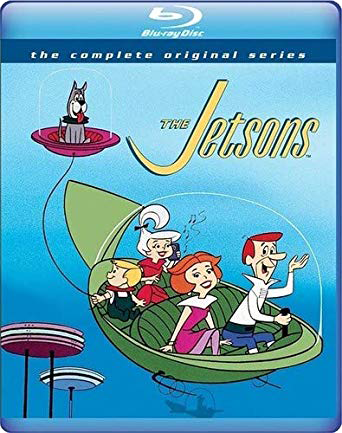 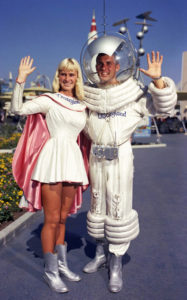 In 1962 Kennedy’s New Frontier was in full effect – the country was still celebrating John Glenn’s heroics and Disney’s Tomorrowland had proved so popular it tacked on a monorail. Flush with the success of The Flintstones, Hanna-Barbara decided it was high time for The Jetsons, a space age sit-com set in a cartoon Utopia. Premiering on a Sunday night in the fall of ‘62 it was the first animated program to be broadcast in color, an eye-popping upgrade that only enhanced the show’s futuristic appeal.

The Flintstones owed its inspiration solely to The Honeymooners but The Jetsons relied on a long line of family-centric fare from The Life of Riley to Make Room for Daddy. The chief cook and bottle-washer was George Jetson, an accident-prone Everyman in a post-modern leisure suit. Jane Jetson was his common-sensical but coddled wife with teenaged Judy and rugrat Elroy rounding out the nuclear family unit. Though they worked and played 100 years into the future, the Jetsons were solidly baby boomer material – each day the clan luxuriated in new technologies – dressed by automated butlers and nursed with mechanized forks and spoons. 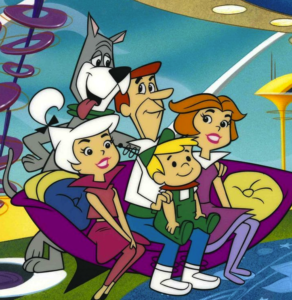 George was played by George O’Hanlon, a busy character actor whose claim to fame was his recurring role as Joe McDoakes, the perennial also-ran featured in a series of short films commonly known as Behind the Eight Ball. His anxious squawk made him the perfect underdog – a voice so distinctively downtrodden as to be distracting in live-action films (especially in a no-nonsense bit of sci-fi like 1957’s Kronos). Jane Jetson was played by Penny Singleton, best known for her role as Blondie, the quintessentially ditzy housewife in a series of low budget films based on Chic Young’s long-running comic strip. Blonde or not, Singleton was no dummy – she was a busy participant in the labor movement and eventually presided over the American Guild of Variety Artists. 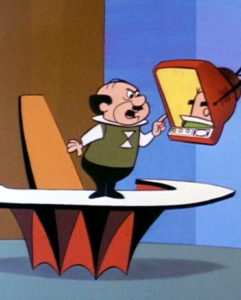 Janet Waldo and Daws Butler voiced Judy and Elroy and the essential Mel Blanc dropped by on occasion as George’s irritable boss, Cosmo Spacely. Though The Flintstones welcomed gimmicky guest stars like “Ann Margrock” and “Stoney Curtis”, The Jetsons avoided such pop culture appropriation in favor of character-driven storylines. The show’s most memorable personalities, Astro the dog and Rosie the Robot, were in some respects the most identifiably human of the lot. Astro, a charmingly conniving mutt, showed the kind of street smarts that always eluded poor George. And Rosie’s whirring monotone gave her wisecracks a warmly understated appeal – she was voiced by Jean Vander Pyl, aka Wilma Flintstone.

Rosie was featured in the debut episode, Rosie the Robot, with a story from longtime TV scribe Larry Markes (F Troop, McHale’s Navy) – a bittersweet tale with overtones of Ray Bradbury’s I Sing the Body Electric that played up the human elements in the kind-hearted robot. Astro was introduced in a similarly heart-tugging manner with writer Tony Benedict’s The Coming of Astro in which Elroy adopted the gangly pooch who finds unexpected competition from a robot dog named Lectronimo. Naturally the machines lose. 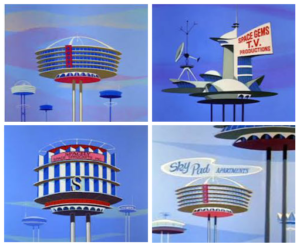 The majority of the plots were boilerplate farce but the sights and sounds of The Jetsons were its lasting strengths – using the playful design of the Capitol Records building as a starting point, Hanna-Barbera’s production artists went to town spoofing modern architecture to create a tinker-toy vision of the future – a nursery school version of Fritz Lang’s Metropolis. The Jetsons’ floating bungalow featured one unique addition, a treadmill for Astro which invariably sucks George beneath its wheels sending him into a non-stop spin high above the clouds. It ended each show on a weirdly existential note – perhaps the machines do win in the end. 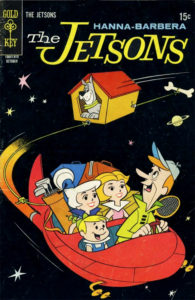 Those sights were entrancing but about those sounds – Hanna-Barbera’s longtime sound designer Greg Watson devised a giddy undercurrent of blips, bloops and skittering spaceship exhaust – the soundtrack of intergalactic life in the fast lane. Hoyt Curtin, the then 40-year old musical savant, outdid himself with an amusement park score and a frenetic theme song that doesn’t break the sound barrier so much as tickle it.

The Jetsons ran for one season before taking on a second, third and fourth life on Saturday mornings where it became a staple for decades, even hopping back and forth among all three networks before the final curtain. The mid-eighties produced a new run with most of the actors back in the saddle. Still part of the pop culture zeitgeist (“Jane, stop this crazy thing!” was a common catchphrase) The Jetsons hit the big screen in 1990 with The Jetsons: The Movie.

Warner Archives new Blu ray contains the complete original series and the gorgeous results more than complement the stellar results of their other Hanna-Barbara releases – a very high – one might say stratospheric – bar.