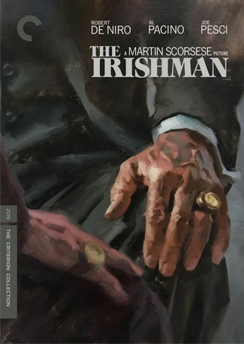 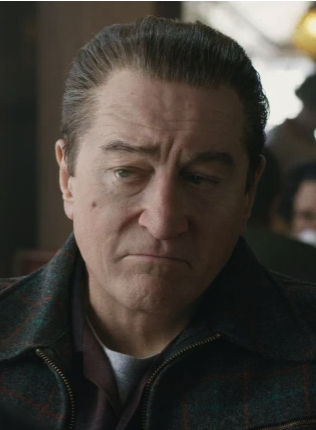 Brotherhood, betrayal, bloodshed… memories are made of this. And these days memories are Frank Sheeran’s only companions. He was a man who engaged in crimes at the behest of some of the most powerful and dangerous men in the country, including the former Teamster head Jimmy Hoffa who disappeared in 1975. Frank took credit for that “disappearance” in a widely disputed confession to Charles Brandt, a writer who decided, like so many romantics, to print the legend.

Frank’s remembrances, both far-fetched and frighteningly credible, first appeared in Brandt’s 2004 book, I Heard You Paint Houses. Using Brandt’s work as a launching pad, Martin Scorsese began production in 2007 on what would eventually become 2019’s The Irishman. In some literary corners Brandt has been painted as unreliable as his subject—fortunately, tall tales or not, Scorsese’s style is unimpeachable; he makes high art out of Sheeran’s blood-soaked past and his bleakly uneventful present—which is where we first meet Frank, now biding his time in a coldly generic “senior living facility.” The film begins in typically Scorsesian manner—the camera weaving through the hallways of the nursing home as it searches for its subject among the stone-faced residents—in some ways it’s a forlorn postscript to the dizzying nightclub sequence in Goodfellas. But The Irishman isn’t a euphoric night on the town, it’s the melancholy morning after. 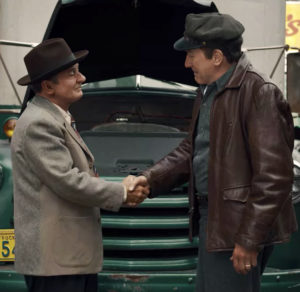 Brandt’s prose doesn’t match Scorsese’s facility with the camera but the director’s stealth skills do bring to life Sheeran’s own brutally succinct descriptions of mobsters in action—”Bugs got shot—twice in the head. He went down dead.” Robert De Niro plays Frank, now a solitary man stranded in his wheelchair—and as he reflects on his beginnings as a footloose racketeer on his way up a very precarious ladder, the mood brightens—and how it could not? Fats Domino and Marty Robbins on the jukebox, miniature golf and soda shops, the enormous Oldsmobiles and Plymouths, not to mention Frank’s speedy Hudson Hornet; viewed through Scorsese’s myth-making lens, the rise of a thoroughly corrupt hitman carries a distinctly all-American spirit. 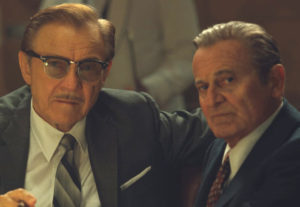 During World War II Sheeran indulged his sadistic tendencies in a series of war crimes—an implacable killer even then, Sheeran explained, “You did what you had to do.” He was just warming up. Back in the states, Frank found himself in a dead end job as a truck driver but thanks to mob boss Russell Bufalino—who knew a career criminal when he saw one—Sheeran got a chance to prove himself by stealing racks of meat from his own company’s freighters—a  thief of prime beef. The job doesn’t go smoothly (Frank is a bad liar and he winds up in court) but the trucker’s malleable disposition and “I’ll kill anyone you want me to” attitude is attractive to the higher ups, in particular Harvey Keitel as Angelo Bruno, head of the Philadelphia family and Joe Pesci as Bufalino, who takes Frank under his wing while being mindful of his protege’s every move—a fraught relationship that will soon be tested by the appearance of Hoffa who embraces Sheeran as a real friend—right up to the moment Frank pulls the trigger. 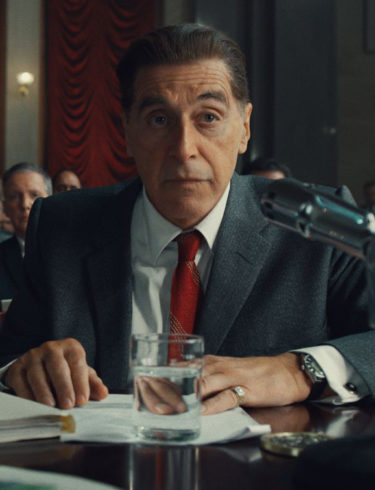 Keitel and Pesci play Bruno and Bufalino as two peas in a pod, like a gangland Scrooge and Marley they’re Machiavellian in their maneuvers and close to the vest regarding their intentions—in stark contrast to Al Pacino’s portrayal of Hoffa as a wide-eyed, quick-tempered tantrum-thrower. Pacino is weirdly charming—his boyish lust for ice cream sundaes is as vivid a display of Jung’s “eternal child” as Cody Jarrett’s mother-worship. Sheeran spent his life buffeted by the whims of these monsters and always sailed wherever those winds took him. Throughout it all, Frank maintained the same workmanlike demeanor for every heinous crime, almost to an absurd degree—even Hoffa’s murder begins with a long conversation about a dead fish.

Steven Zaillian is a screenwriter known for taming complex historical narratives like Schindler’s List and Moneyball. He and Scorsese up the ante in The Irishman, leaping back and forth in time ala Citizen Kane. And like Kane, the actors’ ever-changing faces—sometimes as craggy as an Easter Island statue—signal a change in the era. To this day Kane has courted controversies but its make-up effects were low on the list—not so for The Irishman which endured months of speculation about the intricate digital work used to age and de-age De Niro and co-stars. That chatter was just that, chatter—the effects are remarkably effective, sometimes near miraculous. And as the actors age, naturally so do their surroundings—from the neon-lit pizza joints in Little Italy to the soul-killing pre-fab decor of their twilight years (the Age of Polyester). Mexico City-born cinematographer Rodrigo Prieto lights Laura Ballinger’s pitch-perfect settings in a way that suggests a modern-day Chiaroscuro, giving both mid-century and contemporary scenes, even the nursing home, a neoclassic veneer. 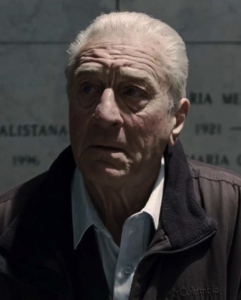 Scorsese’s long-time editor Thelma Schoonmaker has achieved a synergy with the director that powers one of the great creative partnerships in film history. They may not be joined at the hip but they definitely share the same nervous system. The mood swings of Mean Streets, Taxi Driver, and Goodfellas—jolts that felt like you were wired directly to Scorsese’s synapses—are still present in The Irishman, but they’re tamped down and wary… fitting for this modern-day tragedy of a man on his last legs yet still looking over his shoulder.

Criterion has put together a superior presentation of The Irishman, the first Scorsese film to be produced for the small screen—in this case that small screen belongs to Netflix, a streaming service with very deep pockets (The Irishman is an epic film, even more-so behind the camera; there are many more crewmen than there are actors, and there a lot of actors). The story plays out in a claustrophobic atmosphere so in some respects the movie’s style fits right in with the home theater environment. The Blu ray package contains two discs, the first sporting a superb transfer of the three hour and forty-nine minute film.

The second disc is home to a thoughtful collection of documentary material, most prepared especially for this release including a high-spirited round table discussion with Scorsese, De Niro, Pacino, and Pesci recorded in 2019. There’s also a fast-paced look behind-the-scenes called Making the The Irishman along with something of a companion piece, The Evolution of Digital De-aging, featuring the wizards of Industrial Light and Magic and a look at the near-supernatural technology that grants the actors their own personal Fountains of Youth. Plus Farran Smith Nehme, that superb film writer, goes the multi-media route by writing and narrating a revealing video essay on the motifs found in Scorsese’s work—Gangsters’ Requiem.

There’s also a short Anatomy of Scene with Scorsese discussing Frank’s ceremonial dinner, a pivotal moment in the film. Wrapping up the video extras is some contemporary footage of interviews with the “real” Frank Sheeran and Jimmy Hoffa. The remainder of the extras appear in the slipcase itself—critic Geoffrey O’Brien’s print essay and Gregory Manchess’s elegant paintings which spruce up the covers.