Paranoid, vengeful, with skin so thin you can see through it, The Invisible Man is the most nakedly neurotic of Universal’s classic monsters (beating out Larry Talbot by a hair). That said, this particular monster was something of a one-note character yet the diligent creators behind the subsequent sequels did their best to introduce a little variety into his act. Those films have just been released in a new Blu-ray set containing the original 1933 classic, the four sequels and the invisible one’s 1951 run-in with Abbott and Costello, all in immaculate transfers from Universal Studios Home Entertainment. 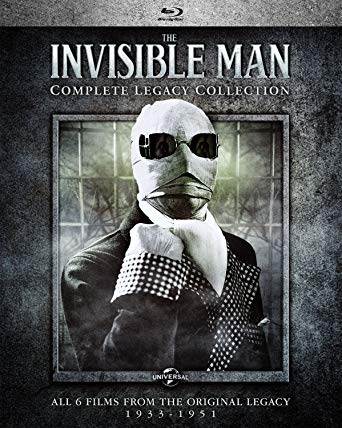 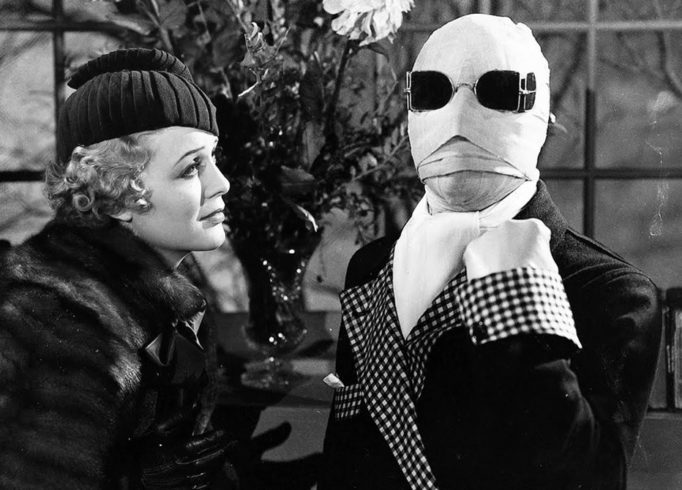 The story of a mild-mannered scientist driven mad by his own experiments, The Invisible Man is one of the most audacious films to emerge from the Hollywood studio system. Set in a winter wonderland more ominous than beguiling, James Whale’s chilly farce is a snow-covered minefield of black comedy – watch your step, the director’s sense of humor is lethal.

Played by Claude Rains, the unseen Jack Griffin is a transparent rage machine – the chemicals coursing through his veins have rendered him invisible but revealed his worst instincts (“The drugs seem to light up my mind!”) – irrational and increasingly cruel, he’s the overlord of his own phantom world. Holed up in a tiny Sussex inn in search of a cure, Griffin demands solitude but the world intrudes – a disgruntled innkeeper pokes the invisible bear one too many times and a one-man reign of terror is begun.

This was the 44 year-old Brit’s first American film and, appropriately, his first talking picture. Rains’ stentorian voice – hectoring, near-hysterical and finally pitiable – is the heart of the movie. Though he’s hidden by bandages, a putty nose and a nifty pair of post-modern sunglasses, his motives are more easily understood than a hundred flesh and blood thespians.

As Griffin works his way through his victims his madness increases, along with his cheeky hubris. The film’s surreal disconnect reaches its apogee as the shadowy fugitive, visible only as a disembodied pair of trousers, skips down a country lane singing “here we go gathering nuts in May” – a bizarrely whimsical moment which is just a prelude to one more brutal murder (the sardonic megalomaniac taunts his victims for good measure – “I’m strong and I’ll strangle you”). 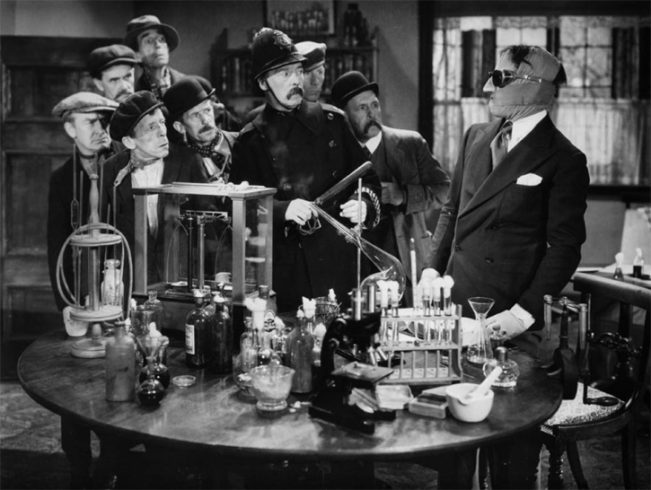 Griffin has his goggles set on one enemy in particular, Arthur Kemp (played by William Harrigan), an obsequious Don Juan who uses Griffin’s absence to prey on his beautiful fiancée, played by the plucky Gloria Stuart (who makes the mealy-mouthed interloper seem even more spineless by comparison).

Harrigan’s two-faced braggadocio makes Griffin’s final act of revenge seem almost sweet – but the coward’s fiery fate is too horrible to accept as a feel-good moment. In contrast, Griffin’s solemn death scene is staged with the mock piety that Whale would later inject into so much of The Bride of Frankenstein. Luckily for the director, irony was still alive and kicking in 1933 – he concludes the film with his endlessly chatty anti-hero finally visible yet unable to speak.

Whale’s direction is a masterful balancing act juggling music hall gags with Zodiac-Killer suspense. Thanks to the director’s mordant style the laughs win out – from his overwrought leading man to the punk rock caterwauling of Una O’Connor to the overripe accents of the villagers, Whale managed to parody his own Frankenstein 43 years before Mel Brooks. 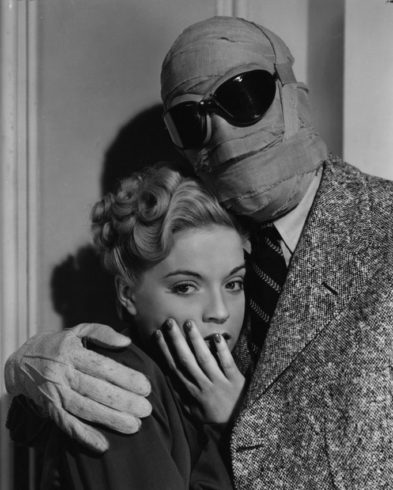 The sons and daughters of The Invisible Man were a motley crew – a World War II fighting ace, a fed up fashion model and a hypersensitive welterweight – each of them stuck with their own baggage and none of them fit to carry the old man’s luggage. Universal’s Invisible sequels, though brisk and generally painless time killers, were by-the-numbers matinee fodder leaving Whale’s valiant efforts to shake up the status quo either ignored or forgotten.

The studio waited seven years to churn out those sequels, finally releasing Joe May’s The Invisible Man Returns to theaters in January of 1940. Vincent Price stars as Geoffrey Radcliffe, a man framed for murder and on his way to the electric chair when the brother of Jack Griffin steps in with his invisibility serum, allowing Radcliffe to escape and search for the real killer.

This film and the subsequent entries in the series show why it was necessary for the invisibility serum to drive the hero mad… a sane Invisible Man is pretty dull company and Returns is Exhibit A. Price’s vocal prowess knew few matches but he’s uninspired here (Curt Siodmak’s flat dialogue doesn’t help). The normally good-humored trooper shows more wit and self-awareness in his 30-second cameo in Abbott and Costello Meet Frankenstein than any of the 81 minutes of May’s film. 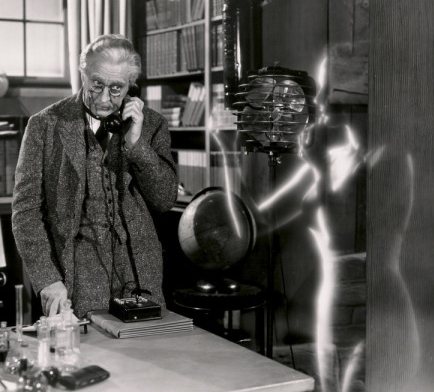 Despite the tepid proceedings, the reemergence of the invisible one appealed to wartime audiences and a sequel to the sequel was rushed into production for release later that same year, though the results were nothing that Whale or Wells could have predicted. The Invisible Woman, directed by A. Edward Sutherland, took an abrupt right turn into screwball comedy replete with a fever-dream cast comprised of John Barrymore (as the original Absent-Minded Professor), Margaret Hamilton, Oscar Holmolka and Shemp Howard (whose gonzo burlesque stylings are sadly absent).

Virginia Bruce plays the disgruntled clothes horse who accepts Barrymore’s offer of an invisible vacation from her miserable day job and her even more miserable boss (played by hatchet-faced Charles Lane). Sutherland was W.C. Fields’ favorite director and for good reason – though lacking much visual flair, from International House to Poppy he was able to orchestrate an on-set atmosphere that kept his moody stars and starlets happy (the odd man out being 1933’s Murders in the Zoo, a gruesome pulp fantasy whose lurid atmosphere and eccentric humor was closer to Whale’s sensibility).

The low blood sugar screenplay, peppered with tired slapstick (by the usually dependable Robert Lees, scribe behind so many Abbott and Costello films), does no favors for the graying Barrymore – there’s nothing in Lees’ script to inspire the galvanizing comic outbursts that propelled his indelible performance in 1934’s Twentieth Century. 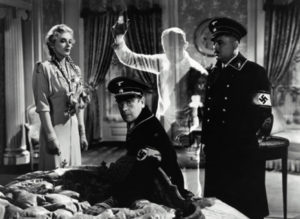 The next film in the series was not so much a right turn as a right face – Invisible Agent is a fast-paced piece of wartime agitprop helmed by Edward Marin (responsible for the abysmal 1938 version of A Christmas Carol) and crammed with as much daring-do as a Blackhawk comic book (which made its first appearance in August of ‘41). Like that comic’s eponymous hero, star Jon Hall leads with his chin as the grandson of Jack Griffin parachuting into enemy territory on the back of grandpa’s invisibility serum.

The villains are an amusing lot with beady-eyed Cedric Hardwicke as the kind of finicky fascist who clutches their smokes in the dainty two-fingered manner favored by dime store villains, and Peter Lorre does a perfect imitation of his sleepy-eyed Looney Tunes incarnation. Screenwriter Curt Siodmak brings up the rear, checking off all the action movie buttons while painting the Third Reich as simultaneously buffoonish and evil – a common trope from The Great Dictator to Donald Duck. 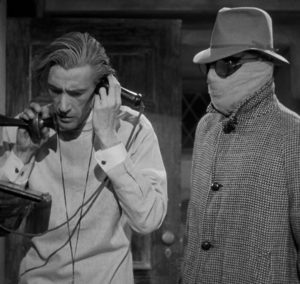 Directed by Ford Beebe and released in 1944, The Invisible Man’s Revenge brings back Jon Hall in a far more malevolent state of mind as “Robert” Griffin, a psychopathic killer escaped from a mental institution to seek an ill-conceived revenge on his old friends. Or not.

A contemporaneous press book paints a different picture. In that synopsis, Hall is a hard-luck explorer framed by fellow adventurers – played by Gayle Sondergaard and Lester Matthews – but the film is rife with scenes of Sondergaard and Matthews behaving in overtly sinister fashion that lead to … nothing. The number of bizarre cuts (much of the movie plays out like an upended jigsaw puzzle) and the unexplained disappearance of Sondergaard midway through the movie only adds fuel to the theory that the plot was changed dramatically during or after production.

John Carradine joins Cedric Hardwicke, Evelyn Ankers and the always terrific Sondergaard in upholding the inimitable Universal brand and legendary cinematographer Milton Krasner (The Seven Year Itch, King of Kings and How the West Was Won) lights the production in high-toned gothic style. That was that for the “official” run of Invisible sequels until Abbott and Costello called. 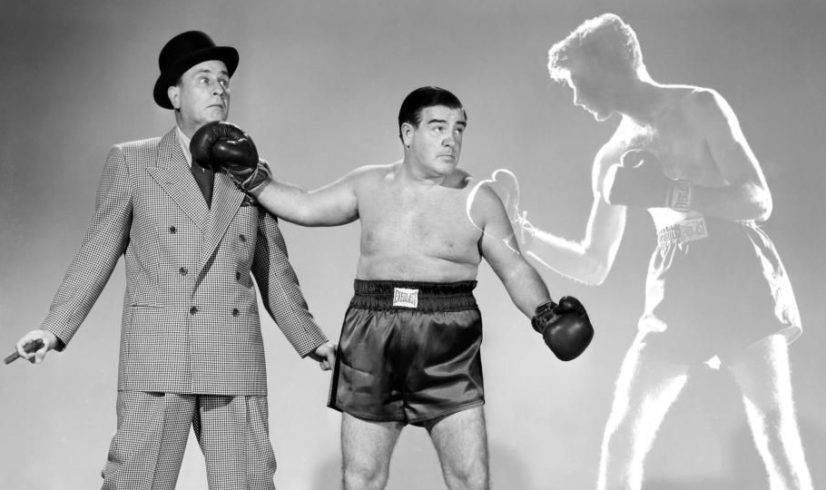 After the success of 1948’s Abbott and Costello Meet Frankenstein, Bud and Lou were run through a rogue’s gallery of Universal’s most popular boogie men – their 1951 meet-and-greet, Abbott and Costello Meet the Invisible Man, is a laid-back but entertaining comedy with help from the Runyonesque Sheldon Leonard , cigar chewing William Frawley and Charlie Chaplin (in absentia) for a pivotal boxing scene ingeniously cribbed from City Lights.

Bud and Lou play recent graduates of a private detective school and that juicy premise is quickly quashed by a visit from the disagreeable Arthur Franz as a hot-headed boxer on the run from the law. Invisibility is the key to his fate and Bud and Lou go along for the ride, chaperoning the ill-tempered Franz in his quest to restore his honor.

The wizardly John P. Fulton created the special effects for all the films in Universal’s Invisible series (save for the Abbott and Costello entry) and it’s a testament to his groundbreaking work on Whale’s film that though the effects became ever more polished as the series progressed, their fundamental ability to shock and awe remained the same.

Universal has been performing their own wizard’s work – their recent Blu-ray restoration of King of Jazz was above and beyond the call of duty – and their yeoman’s job on their classic horror titles, beginning with the one-two punch of the Frankenstein and Wolf Man Legacy editions in 2016, has been unimpeachable (aside from the recent Creature controversy). The Invisible Man Complete Legacy Collection is no different with beautifully immaculate renditions of the ‘33 classic and its fun-loving follow-ups.

Disc one features The Invisible Man with all the extras produced for previous DVD and Blu-ray editions included. The other films in the series are spread out over three other discs with just the trailers to be found:

Disc 2 – There are no extras on this disc.