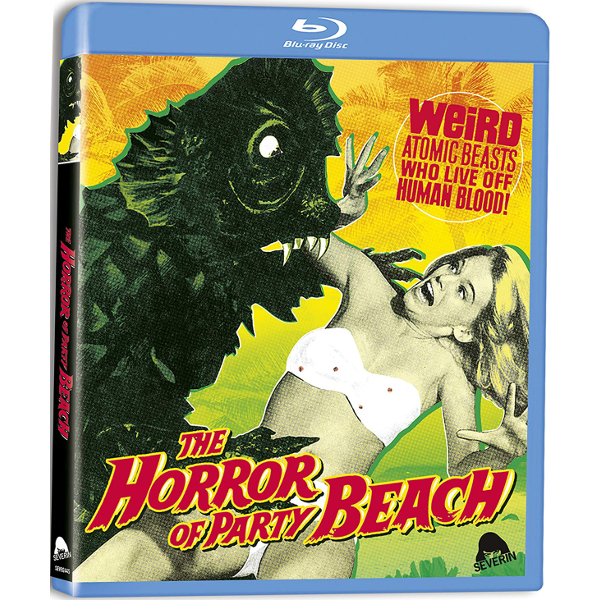 1964 was the breakout year for teen monster fandom, when Forrest J. Ackerman and his monster fad was featured in major magazines. It was also the big year for A.I.P’s Beach Party movies. Perfectly poised to break out of the glut of bad independent moviemaking was a movie entitled The Horror of Party Beach. New York theater producer Del Tenney had already made an unreleased loser called Zombies, that was eventually retitled  I Eat Your Skin. Tenney’s minor thriller Psychomania was enough to hook him up with exhibitor Alan Iselin, for a pair of not-bad programmers. 20th Century-Fox happily snapped up the result for distribution, dropping the title ‘Invasion of the Zombies’ for a more commercial Annette & Frankie vibe. One compliment for Tenney’s commercial savvy is that Fox didn’t require changes to either film — they went out pretty much as Tenny finished them. Of course, had they asked for changes, where would an editor start?

Who needs originality? Radioactive waste dumped from a boat reacts with human remains in the waters off Stamford, Connecticut, resulting in a half- dozen scaly monsters that surface to rip hapless females to shreds. Pouting tease beach dancer Tina (Marilyn Clarke) is the first to go, sending her sometime boyfriend and M.G. driver Hank Green (John Scott) back to his ‘nice’ girlfriend, Elaine Gavin (Alice Lyon). Hank works with Elaine’s doctor father (Allan Laurel) to find a scientific way of eliminating the slimy horrors from the deep. Giggly girls are easy pickings for the marauding zombie monsters — they can’t hold a slumber party, fix a flat tire or walk home alone at night without coming under attack. Some of the monsters cart unlucky teen maidens back to the water, for later snacking convenience!

The Horror of Party Beach is a low-grade monster show with a difference — it knows exactly what it is: spirited fun. The pitifully goofy monsters appear to be wet suits covered with vinyl triangles for scales, plus a helmet-like monster mask on top. They’re almost as silly as the burlap-bag monster in Roger Corman’s Creature from the Haunted Sea. Bad-movie critics and MSTK3000 have had no end of fun with the monsters’ googly eyes, and what looks like a dozen large hot dogs crammed into each of their mouths. Perhaps the film’s dance instructor worked on the monsters’ mime-walk: to effect a distinctive, mock-sneaky gait, each horror-man stalks his prey bent over with elbows up, swiveling his rear end left and right with each step.

The production crafted two of the fully-outfitted monsters, three at most. Several wide forest views show six of these ‘version one’ monsters advancing on the camera, but I’m fairly sure that those shots use a clever triple-exposure trick. A second kind of zombie monster is a shapeless muck-thing with a gaping mouth (see photo, top↑). Imagine covering one’s self with glue and then rolling around in vacuum cleaner lint, and you’ll have the right mental image for the version two creatures.

The lumpy screenplay starts off well. Del Tenney enlists the help of a motorcycle club for an on-the-road opening and a short fight scene. The spirited nonsense on the beach is aided by halfway clever dance choreography — twenty or so Connecticut kids do their best to imitate California Girls. Remember that at this point the Beach Boys had only been around a year or so. The not-bad (by teen monster movie standards) band the Del-Aires provides four or five songs, including one called ‘The Zombie Stomp.’

After the first radioactive monster arrives the show becomes a standard Creature Feature. A sequence showing radioactive effluence turning skeletons into fiendish zombies is actually fairly effective, at least in graphic terms. Clouds of silt obscure the skeletal remains in stages, masking the regeneration of flesh just like the animated underwater clouds in the Rite of Spring sequence in Disney’s Fantasia. No, I’m not proposing an artistic equivalence.

Much of the dialogue is crudely post-synchronized and some of the acting hopeless, and we’re accustomed to seeing clueless lawmen and scientists with foolish-sounding theories. The infantile dialogue favors silly kissing and girl-watching jokes that are even dumber than that heard in A.I.P.’s Beach movies, but that certainly was no problem in 1964. Del Tenney’s camera focus on shimmying bikinis reminds us of George Axlerod’s similar fixation in his scattershot satire Lord Love a Duck. A.I.P.’s casting director restricted the camera view to California girls with fab figures. Tenney appears to be filming on a public beach. His enthusiastic dancers are locals, not pro starlets, and the crowd is packed with plenty of middle-aged squares and ill-shaped civilians, staring at the camera while rocking to the Del-Aires.

Some of the amateur-hour acting is downright endearing. Alice Lyon’s Elaine looks nice but her dubbed voice is strictly Clutch Cargo- quality; Del Tenney gives her and Hank a ‘some enchanted evening’ moment on a dance floor. Actress Marilyn Clark exhibits a strong personality, but unfortunately doesn’t live through the first scene. The only attempt at a sentimental character is Eulabelle (Eulabelle Moore), a friendly maid who serves snacks, dispenses soulful advice and also discovers the method for killing the monsters.

As Tim Sullivan notes in the extras, Tenny must have worked from a checklist of commercial elements: fast sports car, bikers, bikinis on the beach, necking… Elaine notes that Eulabelle has a fondness for Voodoo dolls. That supernatural thread proves to be an irrelevant detail — perhaps Del Tenney kept it in, in case a distributor thought that Voodoo nonsense would be a more commercial hook than Beach Party nonsense.

The monsters prey mostly on cute teenaged girls, tapping into the ‘summer camp shockeroo’ horror tales beloved by Stephen King. A dozen over-aged teens in nighties cut up at a silly slumber party. A rather proto-feminist folk song is heard as the creatures close in for the kill. The monsters crash the party and slay every pajama’d girl in sight, yet the tone never rises above giggle-level. Despite the close-ups of bloody wounds, nothing is any more serious than a high-school skit. The aftermath with the massacre victims lying neatly on the floor, would seem an inspiration for the comic ‘every kid in town is dead’ opening of John Landis’s later satire Schlock!

At about fifty minutes, in comes a wonderful, ridiculous optical montage of monster mayhem. Screaming drowns out music suitable for a western adventure. Big newspaper headlines fly up — all stenciled into the same dummy front page. I can see the 20th-Fox buyer laughing and giving a big thumbs up. It’s great stuff — teen victims by the carload are being killed and kidnapped, yet  the police response is still just a couple of cops scratching their heads.

The science in the film is also laughable. Given a scrap of tissue evidence, Dr. Gavin elects to put it through a carbon-dating test! The scientists examine a gnarly monster hand on a table, which leads to the discovery that sodium can destroy the monsters. Sodium is not table salt, or sodium chloride, but teens that don’t make the distinction will wonder why ocean salt water wouldn’t have the same effect on the monsters. That particular flub is more of an issue in the serious sci-fi thriller The Day of the Triffids.

Logic issues abound. Although they’ve found the magic formula to wipe out the monsters, our scientists do nothing. The womenfolk still keep going to the water’s edge, even that blood-soaked beach where the monsters first appeared. It takes Eulabelle to make Hank get his tail in gear, race his M.G. into the city and buy a bucket of good ol’ sodium!

Before it ends The Horror of Party Beach runs out of just about everything — invention, plot, interest —  yet plays as a satisfactory spook show, the perfect kiddie matinee monster film for 1964. 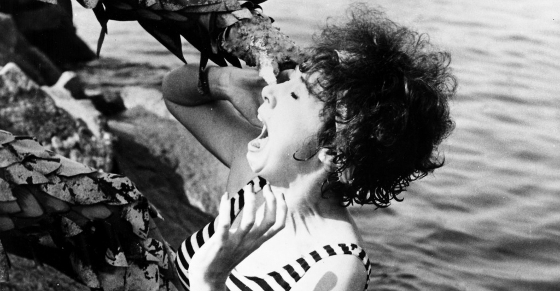 Severin’s Blu-ray of The Horror of Party Beach is a clean, sharp and well-mastered encoding of Del Tenney’s smart, silly beach party / horror mix. The exacting transfer lets us assess the sharp cinematography and the sometimes-impressive optical effects, such as the aforementioned multiple-exposure montage. Tenney did have the problem of shooting his beach dance scenes on an overcast day, which reminds us that we’re definitely not in Malibu.

The sound mix must work with all those flat readings, and blend voices recorded on set with others post-dubbed. But the music and sound effects track is a winner. Monster attacks are accompanied by a ‘wall of sound’ of monster roars and teenagers screaming; a stalking cue is arranged around a single drumbeat. The Del-Aires may sound bland today but they’re better than the kids that played at my Junior High and High School dances. As the audio track avoids the bland polish applied to Fox films finished on the lot, we’re convinced it’s all the work of Del Tenney’s team back in New York.

Severin’s extras revolve around the work of producer-editor Daniel Griffith. His Ballyhoo featurette Return to Party Beach appears to utilize an older commentary from Tom Weaver for its narrative backbone, augmented with a new interview with Del Tenney’s widow, actress Margot Hartman. Her account of acting in summer stock and doing the movies for a creative lark puts the right spin on the movie’s modest but respectable reputation. It’s mentioned that Tenney commissioned multiple monster costumes, but on an earlier Shade Rupe commentary for a 2006 Dark Sky DVD we were told that only two or three of the goofy-faced helmeted creatures were fabricated.

Also included is a new featurette with two surviving Del-Aires, who in their seventies are keeping the dream alive; it’s nice to see that they still enjoy playing Rock ‘n’ Roll. Repeated from an earlier disk, I believe, is a video of Del Tenny recounting the details of his career, in a close-up suitable for a police mug shot.

Contemporary horror filmmaker Tim Sullivan hosts a featurette that tells us that Rock ‘n’ roll and horror went hand-in-hand with teen culture, a questionable claim supported by the ‘music breaks’ in A.I.P.’s teen monster movies. Teen movie fans soon learned to reject late ’50s rock ‘n’ roll ‘musicals’ that used fake lip-synch performances. The drive-in audiences for Horror of Party Beach likely ignored the music sequences, laughed at the monsters, and looked up from their necking only when something gory appeared.

Party Beach has traditionally been paired with its original co-feature, the not-bad gothic kill-off chiller The Curse of the Living Corpse. Both films were commemorated in ancient photo-comic magazines (↑) and were previously released together on DVD. Before dismissing this ilk of films entirely, remember that they received full nationwide distribution. Co-producer Alan Iselin then proceeded to produce the equally well-distributed nonsense thriller Frankenstein Meets the Space Monster. It will be nice if Severin follows up with the other half of the double bill: The Curse of the Living Corpse features performances by both Roy Scheider and the cult actress Candace Hilligoss.