Teutonic art writ large and loud: Arnolf Fanck’s first big ‘mountain’ classic wow’ed them back in 1926, with its massive vistas and death-defying feats of mountaineering, all sworn to be authentic. More importantly, Fanck and his diva Leni Riefenstahl invest their images with the sense of mythic, spiritual kitsch grandeur that became an aesthetic blueprint for the coming Nazi regime. 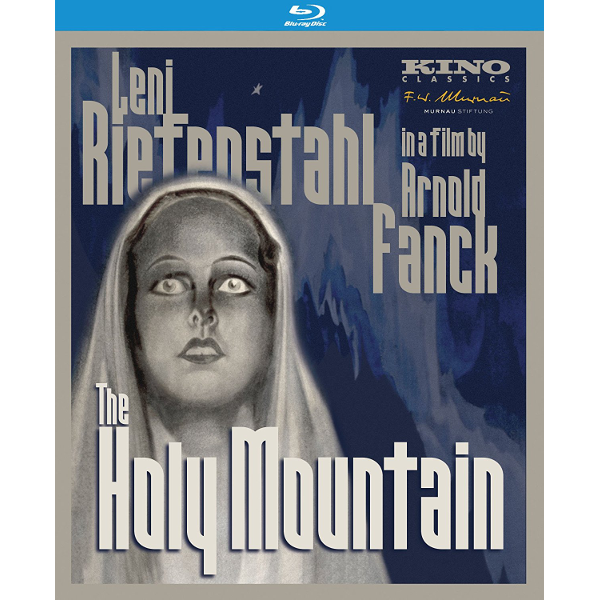 The Weimar-era ‘mountain’ films from Germany are often excerpted but seldom shown intact. Great documentaries like Kevin Brownlow’s Cinema Europe: The Other Hollywood offer glimpses of their impressive imagery, and debate the assertion raised by Siegfried Kracauer: that the films’ linking of a mystical German spirit to the notion of pure blood and will, has a connection to the nation’s deification of Adolf Hitler. A frustrated artist himself, Hitler reportedly admired these movies and found something personally validating in the dancing star, actress and later director Leni Riefenstahl. When Joseph Göbbels took over the German film industry, Riefenstahl’s influence with Hitler was such that her company received fully independent funding from the Reich.

This first bigger-than-life, spiritually infused mountain story was directed by Arnold Fanck, an old hand at nature films who became the king of ‘berg’ pictures. Riefenstahl petitioned the director to act in this picture, and seeing her dancing career limited by physical injuries, soon became Fanck’s unofficial acolyte and pupil. She starred for him again in the powerful The White Hell of Pitz Palu (1929) and the American co-production S.O.S. Iceberg (1933), which features some of the most daring stunt flying ever seen.

Leni Riefenstahl’s film debut and Fanck’s first big international success The Holy Mountain calls itself a ‘film poem’ right up front. A prologue shows the famous dancer Diotima (Leni Riefenstahl) dancing on a rock at the surfline during a big storm, mirroring the clashing waves and identifying herself as a force of nature equal to the sea. In the clouds over the waves, she sees a vision of a giant mountain. Two mountain men, engineer-climber Karl (Luis Trenker) and competitive skier Vigo (Ernst Petersen) attend a Diotima performance and are entranced. The boyish Vigo leaves a flower in her coach, and for his trouble is given a smile and a scarf.

Later in the mountains, the visiting Diotima is enraptured by the beauty of nature. She meets both men. She is drawn to the rugged Karl, and goes on thrilling hikes with him. She watches Vigo win a ski race. Vigo is smitten, and when Karl sees them together he wrongly assumes that they are lovers. On their big climb Karl continues despite a storm, and vents his anger at Vigo just as the winds pick up. Diotima breaks off her dance exhibition in the village when the two men don’t come down. Vigo’s mother (Frida Richard) blames Diotima, who goes alone to a high cabin to rally other climbers to make a torchlight ascent in the dark. Meanwhile, atop a towering crag, Karl and Vigo are stuck in a fatal situation. Karl could save himself by letting go of the doomed Vigo, but that would go against the mountaineer’s code.

The Holy Mountain is indeed an impressive picture, shot through with grandiose imagery and wondrous worship of its questionable values. Diotima and Karl are bigger than life demigods in touch with the majesty of nature, and therefore above mere mortals. Almost all of this is told visually, in powerful images of mountains and meadows — and some ethereal dream sequences — that make the lovers part of a larger harmony that dwarfs normal human issues. I read only one subtitle that puts these ‘superman’ notions into words, when Karl expresses his contempt for the worthless ‘ordinary’ people down below, that haven’t reach his spiritual level.

There’s no question but that Adolf Hitler would have felt validated by this self-serving hogwash. The treatment of characters as elemental forces is indeed powerful, if preposterous. The supposedly noble Karl is an inconsistent idiot. He seems bent on murder/suicide when he pushes Vigo on despite the oncoming blizzard. Then he honors some crazy code, sacrificing himself to ‘save’ a man who is undoubtedly frozen solid. The banalities of ordinary life aren’t good enough for such beautiful, perfect people. Even sex seems too common. The only logical next step involves a death wish. The seductive images stress Riefenstahl’s every-glowing facial expressions, looking at all times as if she were just inspired by divine light. Her mountain chalet is represented by glorious Maxfield Parrish-like views of Diotima sitting on the sill of a large window, with a glorious, airy mountain view in the background. Her commercial dance venue is an ivory palace fit for Mt. Olympus; when she dances at the seashore giant waves threaten to dash her from the rocks. Fanck is an expert at the self-sufficient shot that says it all — gorgeous silhouettes of the dancing Leni or the fearless climbers are often framed in vignettes that change the shape of the screen, or isolate faces in cameo-like frames. The sense of scale must have been overpowering on a big screen, with tiny figures dwarfed by giant rock-faces.

The picture doesn’t flow very smoothly. As with pictures made a decade earlier, individual shots have fades at both ends, indicating that they are less realistic images than free-standing ideas in the mind of the director. Ordinary scenes have ragged continuity and scrambled screen direction. The much-admired ski race sequence is a collection of dynamic angles, that wasn’t the norm in 1926.

I’m no judge of dancing, but what we see of Riefenstahl’s performance doesn’t impress me. She’s neither light on her feet nor particularly graceful, and she repeats the same moves for dances with different themes, arching her back and throwing her arms into the air. Styles change, and I take it on advisement that Riefenstahl was an admired pro. All three actors are certainly good looking. They don’t so much perform as allow the choker close-ups to place them in ‘acting poses’ exemplifying emotional states. Ernst Peterson is boyish and fresh. Luis Trenker is particularly good at expressing indomitable resolve. Standing holding a taut rope for an entire frozen night, he looks as if he’s made of stone. Fritz Lang’s Die Nibelungen and Metropolis present similar idealized heroes and heroines, but never in this unquestioning, adoring fashion. Siegfried is blind to political complications and his deeply flawed wife Kriemheld burns for vengeance. The ‘gods’ of The Holy Mountain undergo no character progression. Karl enters sort of a pantheon of mythic grace, even as he goes to his doom.

The pure-in-heart Diotima and Karl experience a vision that validates their god-like status. The climax is interrupted by an ethereal vision of the afterlife. They proceed, hand-in-hand, through an icy hereafter toward a giant ice palace, a holy mountain of ice that looks quite a bit like Kal-El’s Fortress of Solitude in Superman: The Movie. When she intuits that Karl and Vigo are in trouble, Diotima has already experienced a vision of the real mountain crumbling into rubble; now she sees herself ascending to a holy (but not Christian) reward in the afterlife. It’s impressive, but also the epitome of hubris. Critic Robin Wood’s writing introduced me to the idea of mythomania in film, an irrational elevating of chosen human to a higher level, for questionable reasons. He was referring to his inability to endorse the conclusion of Sam Peckinpah’s The Wild Bunch, which is intent on deifying its outlaws as ‘great men of the West,’ god-men worthy of our admiration. I think the idea applies much better to the characters in The Holy Mountain. The deification of the leader and the righteous rule of ‘charismatic’ individuals and groups is central to the appeal of fascism.

The end of The Holy Mountain leaves us with religious applied to nature and an enraptured goddess, whose natural divinity us groveling average people will never understand. Although self-worth is important, in the case of Leni Riefenstahl, I think she was more than just ambitious and talented — she actually believed that she was a creature superior to her fellow humans. The Kino Classics Blu-ray of The Holy Mountain is a 2K encoding done a couple of years ago, from a Friedrich-Wilhelm-Murnau-Stiftung film restoration accomplished quite a bit earlier. It hasn’t been augmented with digital clean-up and optimization, so is really just a recording of the good film work done. The picture has plenty of flaws that haven’t been touched. Much of the show bears a light scratching down the left extreme, and other scratches appear from time to time. Almost every shot has at least one missing frame here or there, which gives the show a nervous, jump-cutty feel. Finally, a general unsteadiness is present. If software had been used to more firmly register the image, all of those magnificent alpine visuals and expert special effects would be much more impressive.

What’s here is still very impressive, and is augmented quite beautifully by Alijoscha Zimmermann’s music score, from 2002.

Kino includes two key extras. A four-minute excerpt from The Wonderful, Horrible Life of Leni Riefenstahl (1993) returns both the actress and actor Luis Trenker to the filming location. Riefenstahl talks about the scene where she allowed herself to be buried in an ‘avalanche,’ and boasts that she helped film the nighttime torchlit skiing sequence. The feature-length audio commentary by Travis Crawford nervously jumps from topic to topic but covers quite a bit of material. Reading between the lines of the story of the filming, we take Riefenstahl as a voracious self-promoter who wrapped her director around her finger. Crawford’s quotes from Riefenstahl’s autobio sound very much like the justifications of a prime user, whose remembrances of past events have been adjusted to absolve her of all wrongdoing. She’s always the center of attention, both artistic and amorous. The relationship of the older Fanck and the younger actors Trenker and Riefenstahl, filtered through Leni’s version of events, still feels like an ambitious woman using her glamour to manipulate men to her advantage. We learn that the film was delayed by weather and injuries and almost stopped by UfA, which was then controlled by American firms after the exit of Erich Pommer. Both Riefenstahl and Trenker began filming mountain films of their own, with Riefenstahl’s The Blue Light (1932) appropriating the Fanck ethos wholesale.