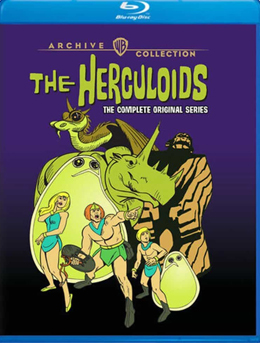 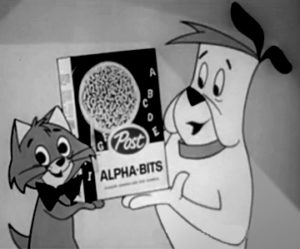 Bill Hanna and Joe Barbera produced 114 Tom and Jerry cartoons for MGM between 1940 and 1956—and then they were fired. The following year they found new employment as America’s babysitters; debuting in December of 1957 was The Ruff and Reddy Show, a rise and shine treat for the little ones and one of the first Saturday morning cartoon shows produced exclusively for television. With its success the duo expanded their reach, greeting kids just home from school with the sweet-natured adventures of Huckleberry Hound, Pixie and Dixie, and Yogi Bear. But the Sixties were the Sixties and in the midst of that mind-bending decade Hanna-Barbera took a turn for the weird: Frankenstein Jr. featured a blimp-sized version of Mary Shelly’s creature. Birdman was a solar-powered superhero with the annoying habit of bawling his own name: “Biiiiirdman!!!” And premiering in September of 1967 was a new high in Saturday morning surrealism, The Herculoids, a hallucinatory half hour starring extraterrestrial cavemen and anthropomorphic amoebas. Hanna and Barbera produced and directed but the show’s bizarro world concepts were created by the otherwise sane Alex Toth. 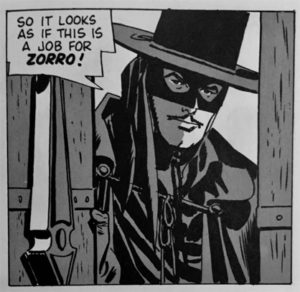 A born illustrator—he sold his first drawing at 15—Toth had a spectacular career in comics, churning out dozens of titles for DC like Rex the Wonder Dog and Green Lantern before a side trip to Disneyland and the Dell Comics adaptations of  Darby O’ Gill and the Little People and Zorro. Though blessed with a steady onslaught of work, his art never appeared rushed—Toth’s draughtsmanship retained its stoic professionalism even when the most puerile subjects came knocking—he approached romance comics with the same dedication he gave to Rip Hunter, Time Master. The cartoonist’s solemn style found its best expression in the “adult” titles like Boris Karloff’s Thriller and a herd of cowboy fare; Maverick, Wagon Train, and The Rifleman. Toth’s work on those TV adaptations made him the natural choice to storyboard original content for the boob tube and in 1962 he was hired to manufacture art for a new kind of science fiction show. 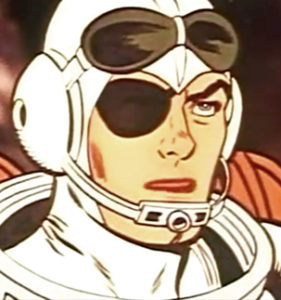 A syndicated series featuring the outer space adventures of a crime-busting astronaut, Space Angel was produced by Cambria Productions with a comically limited animation process known as Synchro-Vox, an addlepated solution for cash-strapped producers who had no money for actual animation—character art was stationary with live-action lips superimposed over the static cartoon faces. Heading up Cambria were artist Chuck Haas and former cameraman Edwin Gillette, the inventor of Synchro-Vox. The company’s tiny crew cranked out 260 episodes of Space Angel between 1962 and 1964 and the show’s surprising success alerted Hanna and Barbera—always with an eye on the competition—to Toth’s new skill set. They hired the artist to develop designs for Space Ghost, an intergalactic hero fated to become a skilled—if unwitting—comedian and talk-show host. Toth became a regular around HB offices where he defined the house style for close to a decade, devising a template that served most of their shows including Birdman, Dino Boy, SuperFriends, and The Herculoids. 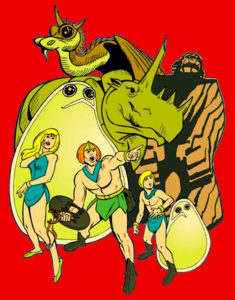 The Herculoids was written by David Scott, Toth, and Joe Ruby and Ken Spears (the duo would split from the company in the 70’s to create pale copies of HB product). Toth conceived the Herculoids characters as a cross-fit family of alien cave dwellers dressed in skimpy leather apparel; Zandor, the rock-ribbed pater familias, Tara, president of the Hot Mom Club and son Dorno. “The Herculoids” themselves are in fact well-trained pets, a laser-beaming dragon named Zok, a monstrous rhinoceros named Tundro, a giant granite ape named Igoo and two blob-like helpmates, Gloop and his son Gleep.

Resembling Venice Beach regulars—blonde and vacant—Zandor and Tara pre-date Den, Richard Corben’s x-rated strip about a brutish libertine whose exploits—seemingly inspired by the Penthouse letters column—became a hit with alternative comix fans. Corben’s strip, distinguished by its steroid-filled title character painted in garish purples and greens, had all the beauty of artwork found on the side of a van. While Toth’s work for The Herculoids is likewise uninspired when compared to his comic book art, what remains eye catching are the backgrounds, reminiscent of Richard Powers’ science fiction art and painted by a skilled bunch of artisans including Paul Julian, designer of 1953’s The Tell-Tale Heart, the title sequences for Coppola’s Dementia 13, and Roger Corman’s The Terror,  Attack of the Crab Monsters and Not of this Earth. 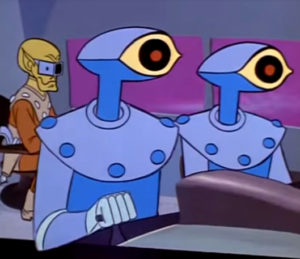 The series debuted Saturday morning on September 9, 1967 and ran for 18 episodes. As wacky as this thing is on the surface, at its heart it is as pedestrian as any earthbound thriller. There’s no variety to the storylines—they are all the same, yet different; strange creatures attack and Zandor and company lumber into action. And thanks to Toth’s musclebound designs and Hanna Barbera’s limited animation, there’s a lot of lumbering. And posing and pointing. At least there’s plenty to point at: winged monkeys, mole men, spider men, bubble men, ape men, and giant ants. The voice artists are similarly undistinguished even though the va-va-voom Tara is played by Virginia Gregg, the voice of Norma Bates (Norman’s mummified mom).

Zander and Tara returned in 1981 just in time for the aerobics fad then sweeping the country. They starred alongside Space Ghost and the Jetsons’ affable pooch Astro in a sixty minute show called Space Stars that ran for eleven episodes before disappearing into the ether. Warner Archive has released the original adventures of The Herculoids on a beautiful, if bare-boned Blu ray set—the only extra is a brief overview of the characters in a documentary short, The Herculoids: First Family of Quasar. Warner’s has treated this toon like Ben Hur with  an immaculate rendering of all eighteen episodes—each probably best viewed when in the right “mood” if you know what I mean and I think you do.