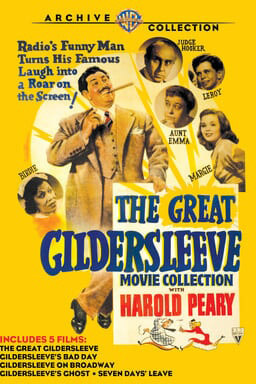 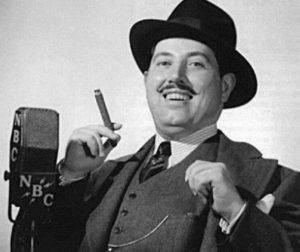 Like the transition from silent movies to the talkies, the progression from radio to film was a rocky road for some performers. Bud Collyer and Daniel Chodos, the actors who lent their musclebound vocals to Superman and Doc Savage, would have been unthinkable modeling skin-tight long Johns or shredded undershirts on the silver screen. But when audiences first caught sight of Harold Peary as the rotund popinjay Throckmorton P. Gildersleeve there was immediate recognition. Peary was built for the part – he looked like a bowling pin in a double-breasted suit but had the self-awareness to describe his character as “a small man who thinks he’s a big man.” Gildersleeve was a pompous fool but he was our pompous fool.

The Great Gildersleeve was the first in a series of four short and sweet small town comedies directed by Gordon Douglas between 1942 and 1944. Douglas had already proved himself a natural at such breezy fare with over 25 Our Gang comedies in his back pocket – including the Academy Award winning Bored of Education. Thanks to the popularity of the Gildersleeve radio show (it ran till 1957) theatrical audiences were well versed in the eccentric ways of the citizens of Summerville, the blandly bucolic burg where Gildersleeve makes his home. 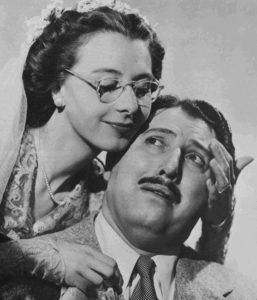 Throckmorton plays guardian to his nephew Leroy (Freddie Mercer) and his jitterbugging niece Marjorie played by Nancy Gates – an upside-down version of the family unit with the kids dispensing parental advice to their childlike “Uncle Mort.” Jane Darwell is Gildersleeve’s sage and sympathetic sister Emma and Lillian Randolph is their vigilant housekeeper Birdie. Throckmorton’s perpetual antagonists are J.W. Peavy, the petulant town druggist and Horace Hooker, the short-tempered judge always ready to throw the book at our hero.

A frenetic tale of matrimonial mix-ups and bedridden politicians, Gildersleeve’s first outing finds him at loggerheads with Hooker who’s threatening to break up Throckmorton’s happy home if he refuses to marry his sister Amelia (played by Mary Field), a lovesick piano teacher with eyes for “Gildy” (not only does Gildersleeve fancy himself a ladies man, he actually is one). The arrival of Aunt Emma – a specialist in home remedies – and the unexpected appearance of an ailing Governor in Throckmorton’s bedroom help stir the pot. And there’s a lot to stir – it’s a wonder the number of plot lines screenwriters Jack Townley and Julien Josephson managed to shoehorn into 62 minutes and still make time for slapstick, musical numbers and Oscar winner Darwell careening through the streets of Summerville on a runaway motorcycle sidecar. 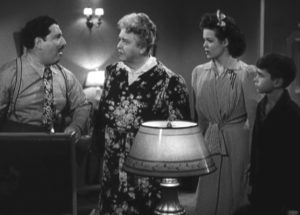 “This is gonna be another one of my baaaad days” announces Peary at the beginning of 1943’s Gildersleeve’s Bad Day – a reasonable predication given he’s just fallen down a ventilator shaft. Gildersleeve is the odd man out on a jury which results in twelve very angry men camping out in his own guest rooms. Once again he and Judge Hooker are at cross purposes leading to a police chase that involves a half-naked Throckmorton and a prickly succession of rose bushes. There are enough twists and turns for a two hour movie but Douglas works with speed and economy and the movie goes down like a vanilla milkshake. Things would be different in our man’s next great adventure, a big city jaunt called Gildersleeve on Broadway. 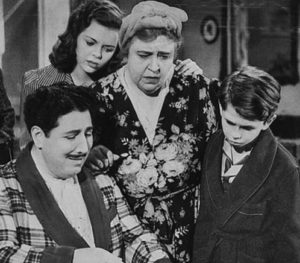 Working from a script by the uber-prolific Robert E. Kent, Broadway is a more conventional style screwball comedy due much to the presence of preeminent kook Billie Burke as the doyen of a pharmaceutical company with designs on Throckmorton. Matrimony is, once again, the only way Gildersleeve can save the day – and Peavy’s drug store. There’s a hitch in Burke’s plan – Gildy is already engaged to Matilda Brown, his longtime inamorata (played by a vivacious if determined Ann Doran). The skyscraper backdrops don’t really suit Peary’s style – he needs a small town to stand tall – and even the bizarre sight of Mr. Peavy in drag can’t lift the enterprise. Still, the approach-avoidance romance of Burke and Peary has its fun. 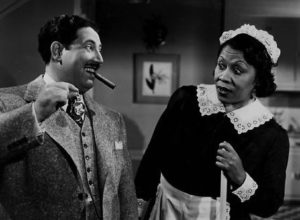 Throckmorton’s big screen career limped to the finish line with 1944’s Gildersleeve’s Ghost, a repository of every haunted house comedy cliche in the book including mad scientists, invisible women and a guy in a gorilla suit. The film’s working title, Gildersleeve, Detective, promised an intriguing new direction but Uncle Mort’s last stand is for the birds. As for that ape, it belongs to crazy Dr. Wells (played by Frank Reicher, the commander of the S.S. Venture in King Kong) and in order to round up the inquisitive simian Leroy and Peavy decide to don their own hairy costumes leading to yet another game of mistaken identity and some uninspired  monkey business. And though Peary gets a chance to play his two ghostly ancestors in the film’s opening scene, the picture is so ragtag that once they exit they’re never heard from again.

Back in 2013 Warner Archives collected all four Gildersleeve films in one package, generously spreading the films over two discs. Warner’s package has just one extra but it’s formidable – an entire film, Seven Day’s Leave. The 1942 musical comedy finds Gildersleeve playing second fiddle to Victor Mature and Lucille Ball. The prints look ok but the years haven’t been kind to the source material. Far from a dealbreaker, Gildersleeve is too great to let a few splices spoil his day.