Blue Thunder (1983) One key sequence in this thriller about a high-tech urban surveillance helicopter is staged (during the daylight hours) at the Pickwick Drive-in in Burbank, California, which was razed in 1990. The Pickwick, due to its proximity to the local movie studios, hosted many movie premieres, most famously that of Blazing Saddles in 1974, for which everyone in attendance was on horseback. 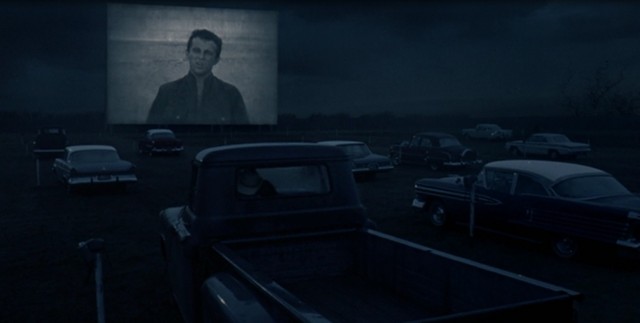 Brokeback Mountain (2005) In one scene after his return from Brokeback Mountain, Ennis (Heath Ledger) takes his wife Alma (Michelle Williams) on a date to a drive-in movie theater, which is lovingly (if briefly) recreated in the film. And it’s a very effective moment of movie magic too—the scene wasn’t filmed at a drive-in at all, but instead a converted softball field in Alberta, Canada. 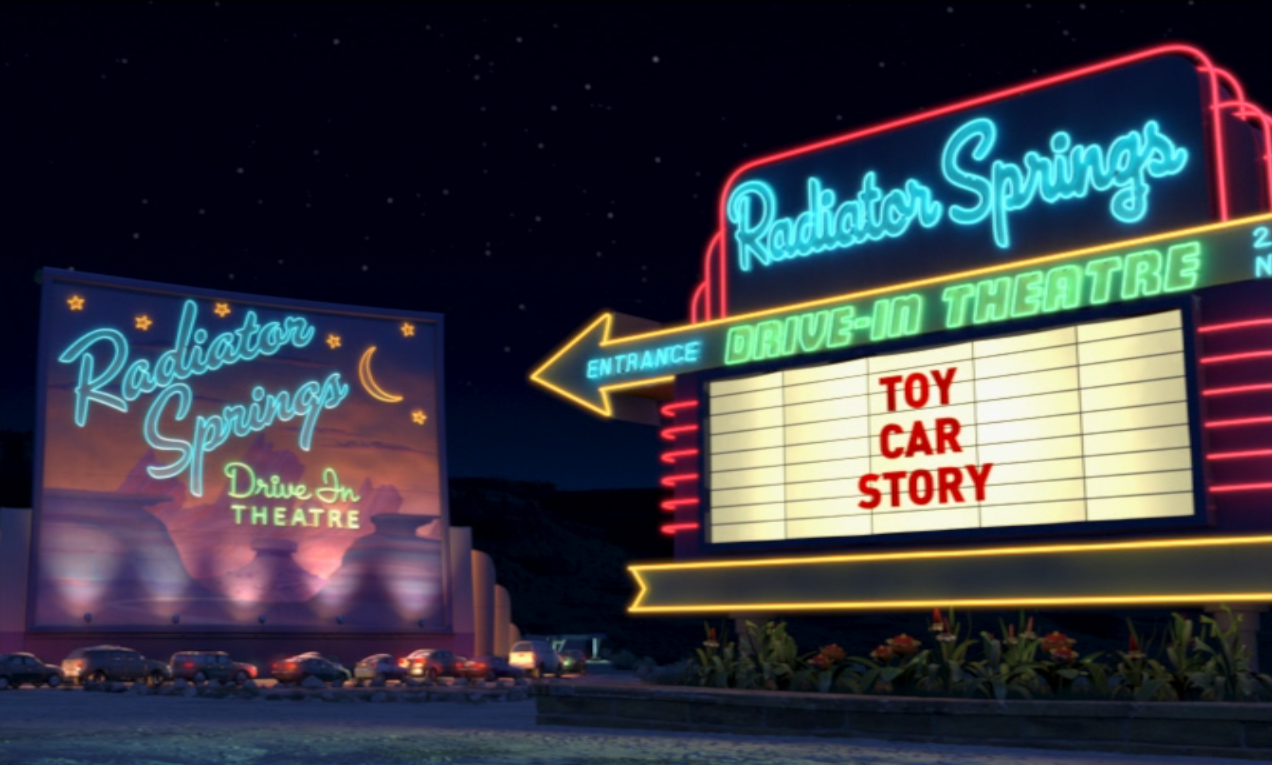 Cars (2006) During the end credits, the cars are shown at the drive-in cinema enjoying parodies of earlier Pixar productions recast with cars in the main roles: Toy Car Story, Monster Trucks, Inc. and A (VW) Bug’s Life.

Dead-end Drive-in (1986) A post-Mad Max Australian thriller in which a young man takes his girlfriend to a date at a drive-in movie only to discover it’s been converted into a prison camp for murderous gangs. A cautionary bit of social satire that will make your own drive-in having been appropriated as a daytime flea market seem a whole lot less annoying. 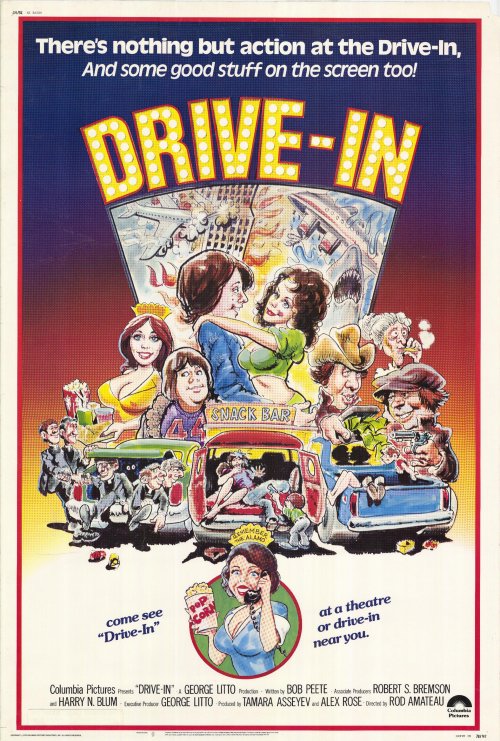 Director Rod Amateau’s American Graffiti-inspired comedy isn’t a particularly great movie, but it does takes place entirely at a Texas drive-in movie theater and as such serves as a nifty piece of small-town ozoner anthropology. You can read my review of the picture right here. 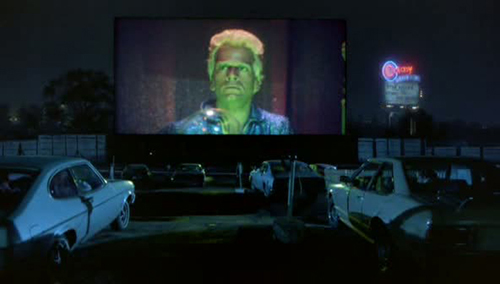 Explorers (1985) My all-time favorite drive-in movie-within-a-movie takes place in this sharp Joe Dante picture. Our young heroes, flying around their town in a makeshift spaceship crafted from an old Tilt-a-Whirl car, buzz the local drive-in on a Saturday night. The recreation of the drive-in movie ambience is brilliant, and we’re treated to a hilarious dubbed-English Star Crash-type sci-fi parody playing on the screen as the homemade spacecraft wreaks havoc on the tower and in the snack bar. 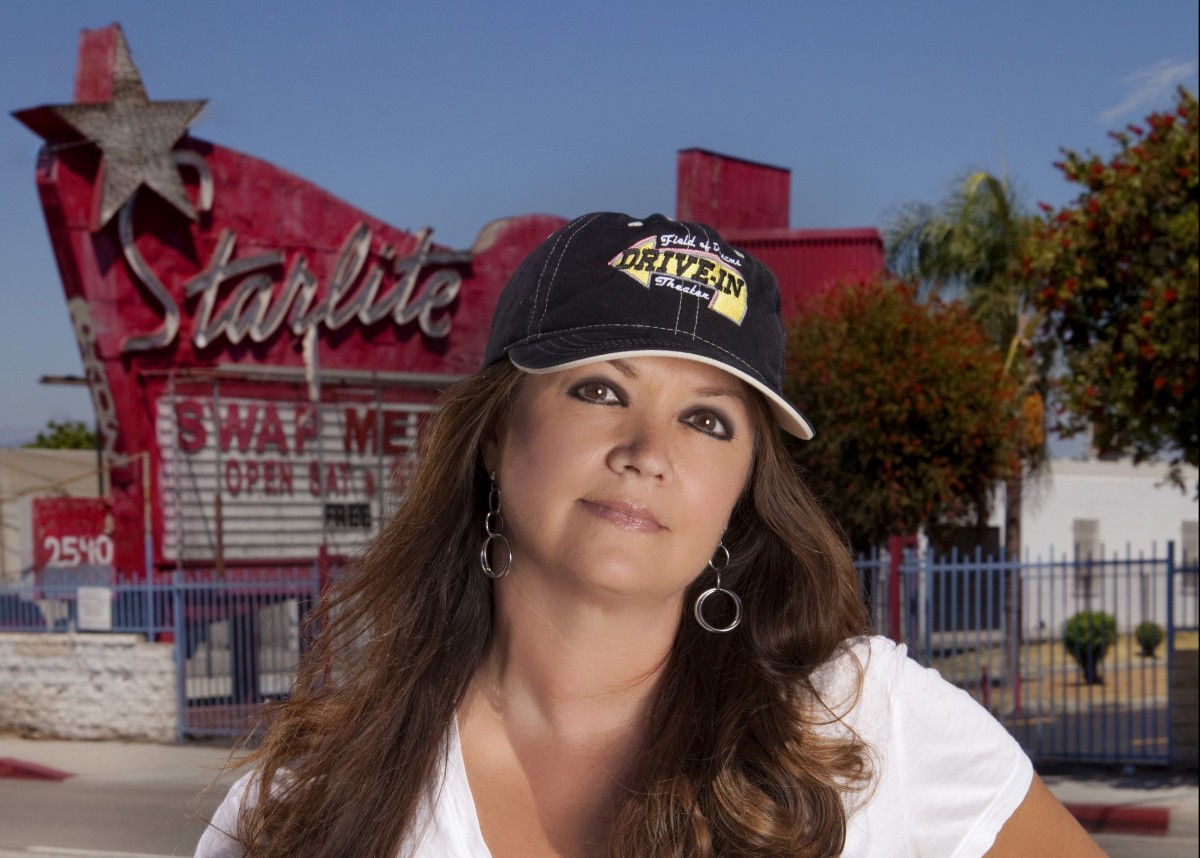 Going Attractions: The Definitive Story of the American Drive-in (2014) Director April Wright’s energetic, thoughtful passion project defies simple nostalgia in its scope and is, precisely as advertised, the one movie to see that encompasses the history and unique experience of the drive-in movie. Wright interviewed me for the movie during the summer of 2006, and the changing fortune of drive-ins between the summer of that interview and the year the movie was released prompted the director to shift her emphasis from the demise of an institution to its unexpected resurgence. Stick around— during the movie I get to tell my favorite story about attending a drive-in triple feature during a January snowstorm! 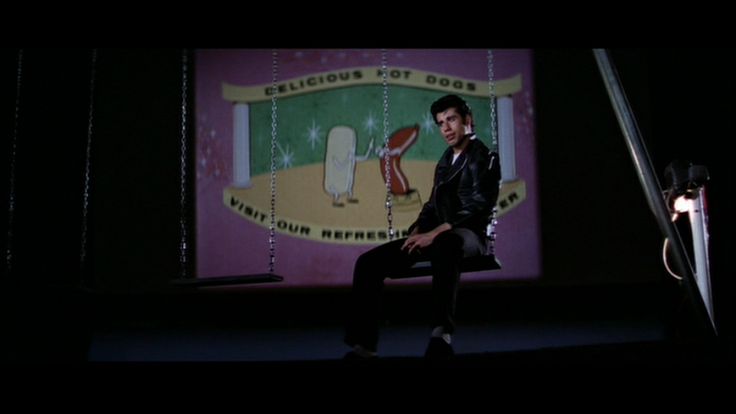 Grease (1978) One musical sequence features T-Bird Danny Zuko (John Travolta) stranded at the drive-in after getting a mite too fresh with Sandy (Olivia Newton-John). He sings a heartfelt ballad to her while cheery hot dogs and refreshment cups dance and prance on the giant screen behind him. When mainstream audiences of a certain age get nostalgic for the experience of their drive-in movie past, this is usually their go-to fix. 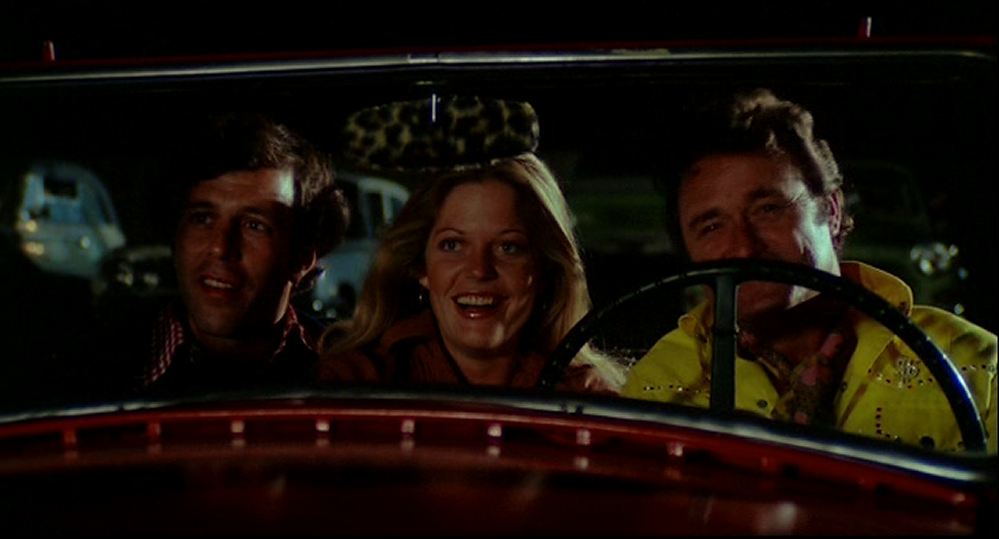 Hollywood Boulevard (1976) Candice Rialson’s agent, Dick Miller, and her screenwriter boyfriend (Jeffrey Kramer) get liquored up for the drive-in premiere of her first low-budget movie, with very mixed results, in this authentically grungy drive-in sequence directed by Joe Dante and Allan Arkush. This is what going to the drive-in in the ‘70s felt like, except maybe for the part about getting assaulted in the projection booth. 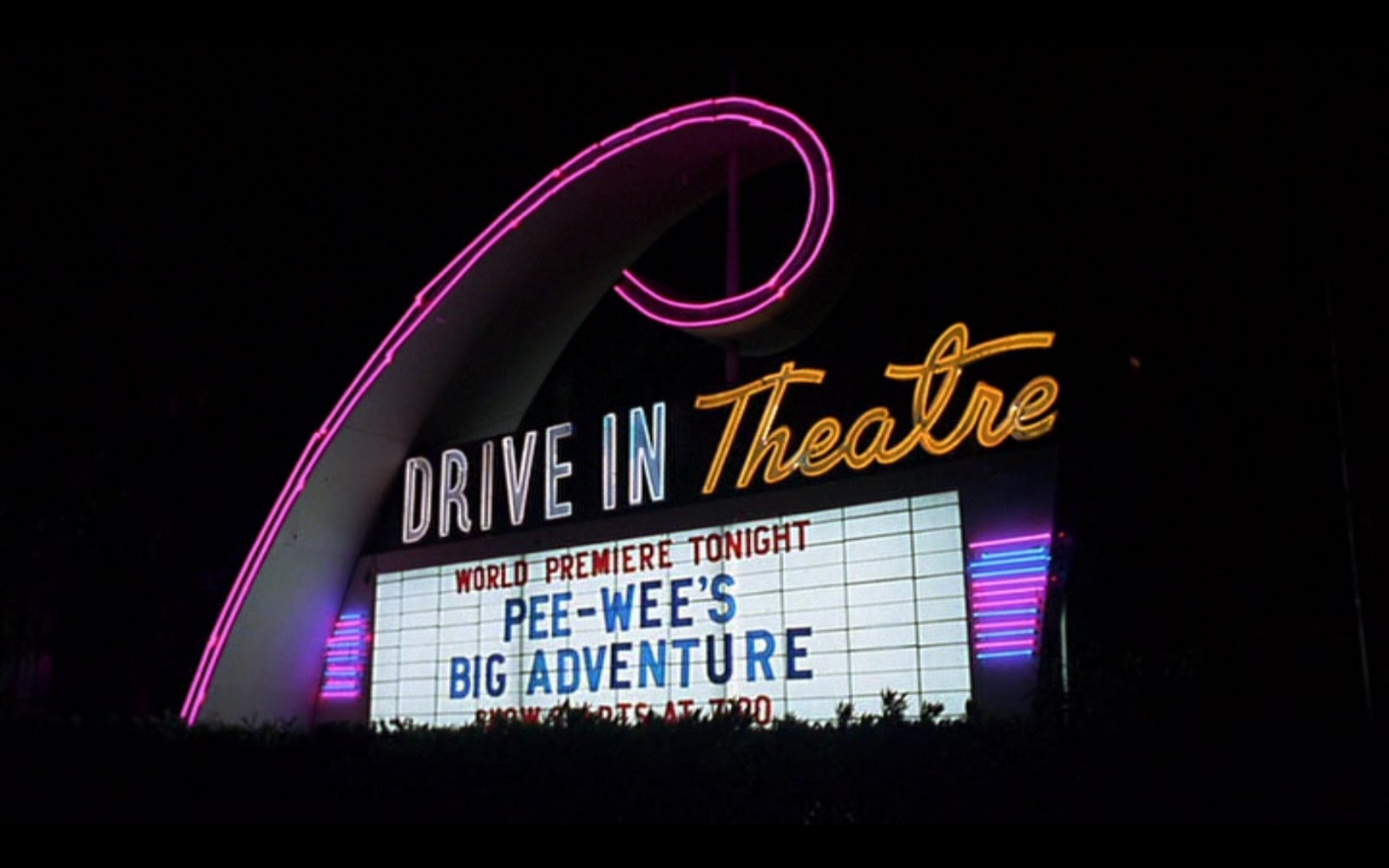 Pee-wee’s Big Adventure (1986) The long-gone Studio Drive-in in Culver City, California plays host to the world premiere of the only slightly altered big-screen version of Pee-wee’s adventures on his beloved bike in this hilarious sequence from Tim Burton’s classic comedy. 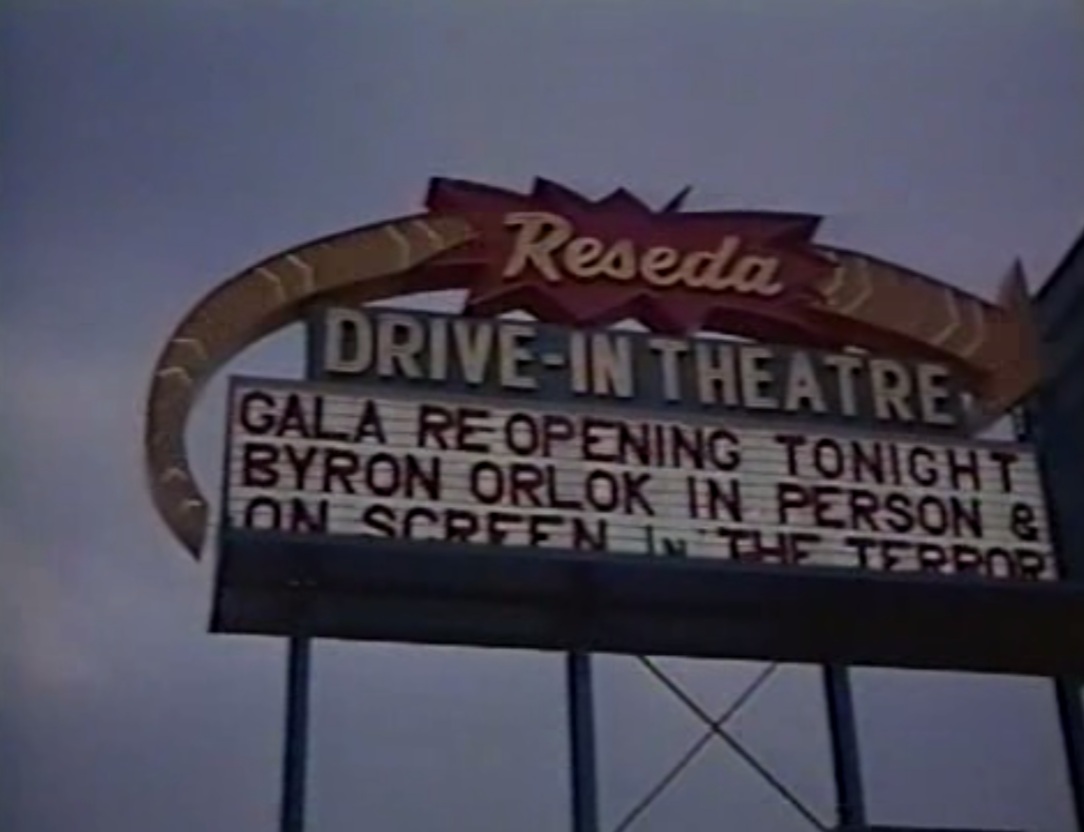 Targets (1968) Peter Bogdanovich’s first movie, a disturbing thriller based on the Texas Tower sniper Charles Whitman, features Boris Karloff as aging horror star Byron Orlok preparing to make an appearance at a drive-in movie theater where the Whitmanesque assassin will soon begin picking off innocent targets. The theater featured in the movie was the Reseda Drive-in. Once located on Reseda Boulevard at Vanowen Street, it closed in 1985 and has since been demolished.

FOR FURTHER RESEARCH AND READING: