There’s nothing like the term ‘Transcendental Style’ to intimidate a filmgoer, but have no fear: Yasujiro Ozu’s tale of a domestic trial is as accessible as I Love Lucy… only more substantial. The transcendental effect is being drawn into Ozu’s minimalist, precisely simplified and mysteriously profound directing style. Ten minutes in you wonder what the big deal is, but not much later one is hanging onto every cut, absorbed by tiny gestures and facial expressions. And yet it all seems natural. The Ozu ‘stasis’ some people mention is not at all static, but an X-Ray into everyday dramatic realities. With an entire second feature by Ozu, What Did the Lady Forget? 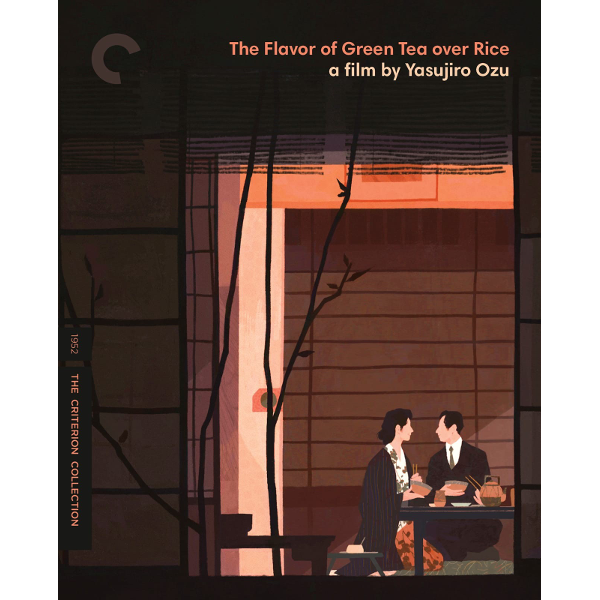 A big question for film fans — is it what a movie gives you directly that is real? Or is what we learn secondhand from critics and experts, and then re-impose on the film, just as relevant?  I’m never sure because I spent film school not questioning most of what I was taught. For subjects like John Ford, Alfred Hitchcock and Fritz Lang, it took years to re-think them without somebody else’s critical filter, and decide about individual pictures for myself. There’s also the influence of my wife, who responds to films as well as I do but also values them on a humanist scale. Pictures about people, real people on any level have value to her, while film theory and ‘movies about movies’ are less vital. It’s a good perspective to keep in mind when watching Yasujiro Ozu: by paring what he shows to essentials, he focuses us on his subject matter first and foremost… even though his spare style is also fascinating!

In the case of Ozu’s 1952 The Flavor of Green Tea over Rice, I was delighted to discover that I was capable of going a little beyond the film’s surface, which is as sentimentally satisfying as the other Ozu pictures I’ve seen. The ‘story’ could be distilled down to two sentences, but the way Ozu and his writing partner Kogo Noda tell the tale is everything — it’s a mini- War Between Men and Women, but seen within a reserved upper-middle class Japanese family. Taking in a complex story like Kon Ichikawa’s The Makioka Sisters can be maddening: some character clashes are readily relatable, while other conflicts seem caught up in cultural traps and feudal-era anachronisms. The situations in Green Tea are thoroughly modern, almost Americanized, yet the characters respond to numerous problems in a way fascinatingly different than what one might see in a Hollywood picture. The strength of Ozu is that we don’t reject what we see, we try to understand. 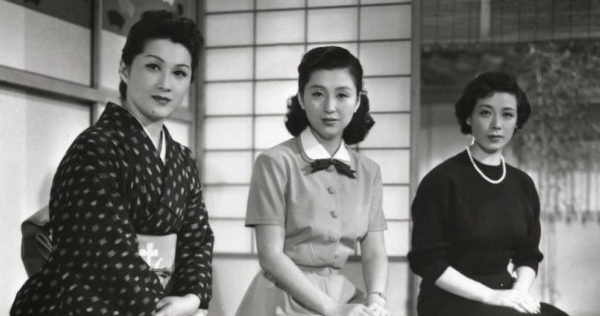 Mokichi and Taeko Satake (Shin Saburi & Michiyo Kogure) are a well-to-do couple with issues. They spend little time together. When the somewhat spoiled Taeko is out with her sister Aya (Chikage Awashima) and niece Setsuko (Keiko Miyake), she expresses her contempt for her husband, calling him a bonehead; she’s ashamed of his provincial table manners. Taeko and Aya think nothing of lying to their husbands to take a trip to a spa, and a baseball game; at the game they see Aya’s husband out with another woman. Taeko still thinks that Mokichi is a dullard.

The modern and independent Setsuko runs out on an arranged marriage meeting set up by her parents, and even ditches her mother and aunt at a Kabuki show. Her predicament drives the wedge between the married couple even deeper: Mokichi enters into the conflict when Setsuko hides out with him at a bicycle race — and meets Non-chan (Koji Tsuruta), a young associate of Mokichi’s. He takes her to a Pachinko Parlor for the first time, and introduces her to ‘good but cheap’ fast food noodles. When she discovers that Mokichi has been shielding Setsuko, Taeko turns cold and hostile. Will the marriage hold together?

With just a little attention, the deceptively simple The Flavor of Green Tea over Rice takes on a strength unmatched by clever, high-pitched western domestic dramas. We learn quite a bit about the status quo in a postwar Japan just as the Occupation is lifting. There’s no more rubble in sight. Middle-level professionals like Mokichi are doing well enough to support leisure-class wives with servants. With no children of her own, the domineering Taeko takes it upon herself to steer Setsuko back from her ‘unacceptable’ ideas of independence. Although Setsuko has a habit of pouting like a teenager, her instincts are excellent. She also has the bad example of her mother’s and her aunt’s marriages to justify her open rebellion against an arranged marriage. The moment that enrages Taeko is when Mokichi says, ‘why should we force Setsuko into a bad marriage like ours?’ 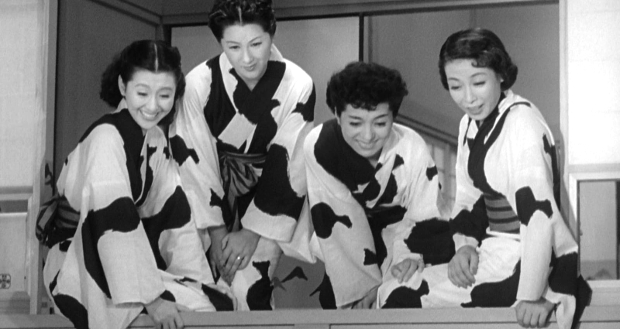 Some of the situations we see are genuinely eye-opening. At the sneak-away spa, the girls feed Koi from their balcony, and crudely compare the fish to their husbands. Setsuko and her sister are shocked to hear such disrespect from their elder authority figures. Aya has something of an excuse because she’s the wage earner, and her husband takes money from her to entertain a mistress. He’s caught red-handed at a ball game, yet Aya doesn’t blow up. We guess that she can do nothing about the adultery, without bringing about social ruin.

Aya’s wandering husband seems a worthless rat, and Aya quite a strong woman. But Taeko’s low opinion of her husband seems totally wrong. Mokichi only hides little things from Taeko, and they seem only in response to her casual neglect. She thinks Mokichi is too dumb to catch on about her spa getaway subterfuge, even after inadvertently revealing the truth over the phone. Mokichi likely wouldn’t have objected in the first place. Where Mokichi gets in hot water with Taeko is when he secretly takes Setsuko’s side in the marriage issue, hiding her, taking her to visit the Pachinko parlor, etc. In Taeko’s view, that’s unforgivable treachery. 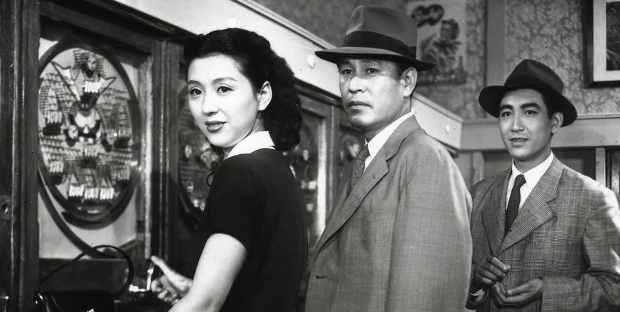 Frankly, Mokichi comes off as a near-saint, absorbing his wife’s veiled insults and slights without prejudice. Their social lives outside the home are separate. The girls share a song at the spa, while Mokichi and Non-Chan listen to Mokichi’s newly rediscovered old army pal Sadao (Ozu veteran Chishu Ryu) sing a song from the Singapore campaign. Compared to the average American male husband figure Mokichi is incredibly passive, but it certainly works for him. Why can’t American men see that aggressively asserting male prerogatives is a sign of insecurity and immaturity?

Don’t expect fireworks at the finale either, just a deeply satisfying fifteen minutes or so of reconciliation, Tokyo-style, that takes place on a subtle level of new trust and cooperation. As Mokichi and Taeko find out how their own kitchen works, it’s like watching people rediscover why they liked each other in the first place… or in their case, possibly discovering things to admire in each other for the first time. 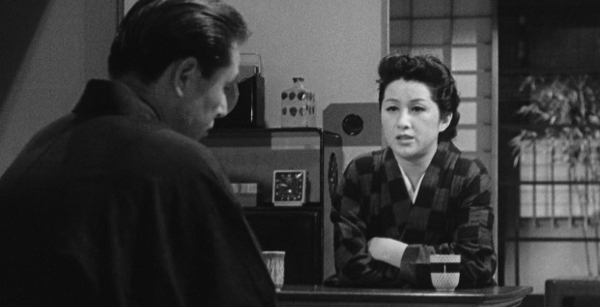 Ozu’s direction is unlike that of any other director. Newbies may find it puzzling that he stays wide and allows for natural pauses. In heated conversations, he simply has actors speak practically directly into the camera. A UCLA directing teacher would correct a student who did that, but it seems wholly appropriate here.

One quickly recognizes the skill and beauty of Ozu’s performers, who express strong personalities through low-key performances. So much is left unsaid. Shin Saburi’s husband is immediately likable. Michiyo Kogure’s Taeko is so convincing as a pouting troublemaker, oblivious to her husband’s sensitivity, that her change of attitude has an impact more profound than maudlin sob scenes in domestic dramas.

I suppose that if you care only about your own life and privileges, foreign movies aren’t important. The popular foreign series I see young Americans presently getting into tend to be Spanish takeoffs on American genres on Netflix, or Scandinavian takeoffs on standard crime and detective stories. The Japan pictured in these classic Ozu pix likely no longer exists, but neither do the sentimental societies presented in John Ford’s period pictures. But in each case, the values still express fundamental truths about the culture. It fascinates me to ponder various Japanese ‘rules’ that seem so different, and then be struck by something that’s exactly the same as my own experience. 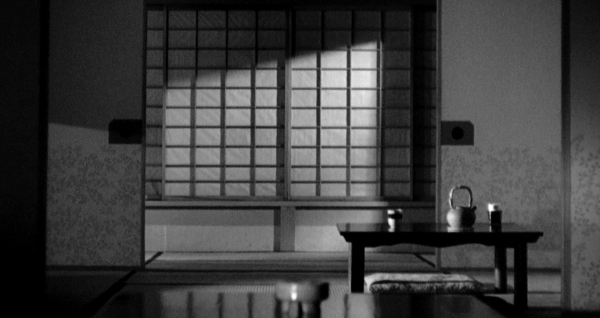 The Criterion Collection’s Blu-ray of The Flavor of Green Tea over Rice is a beautiful 2017 4K digital restoration. The resolution of HD really helps with our appreciation of the performances — Ozu doesn’t do normal coverage, and he’ll often let big pieces of scenes play in wide shot.

Disc producer Elizabeth Pauker assembles excellent critical input with little overlap between experts. Junji Yoshida’s insert foldout essay covers the basics with remarkable insight, starting with a statement about the military censorship that restricted Japanese filmakers in the War years — a girl couldn’t be shown walking down a street without her motivation being weighed in terms of constructive patriotism. Daniel Raim contributes a thoughtful essay about the collaboration of Ozu and Kogo Noda, told with the aid of archival photographs, pictures of original screenplays and cartoon sketches that make the pair seem like a jolly Mutt & Jeff creative team.

David Bordwell’s visual essay underscores things I saw for myself in Green Tea, while adding insights I likely wouldn’t discover in a dozen viewings. He also refers to it repeatedly as a satire, which I suppose viewers more attuned to Japanese film will understand better than I.

Unlike in later pictures, Ozu adds little unorthodox camera moves, sometimes on static scenes, that seem to add a consciousness of ‘living spaces’ as being precious. When the camera does these little track forwards / backwards, the contrast with the stasis elsewhere makes me feel like some kind of ‘heart magnet’ has been turned on — it’s always with or toward Mokichi or Taeko. Bordwell calls them ‘mystery moves’ but then suggests a warm interpretation for the final one in keeping with Ozu’s quiet expressiveness. 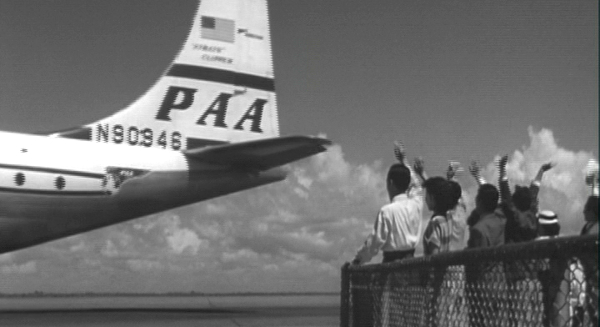 The essay and the featurette mention a 1937 Ozu picture with similarites to Green Tea called What Did the Lady Forget?  Such an exotic item would normally be out of reach, but Criterion adds it as another extra.   The movie turns out to be a delight, a much broader comedy about a marriage interrupted by issues with a troublesome daughter. It’s quite funny.

Bordwell talks about ‘mirrored’ elements such as the different scenes where songs are sung. I was curious about two ‘paired’ corridor shots, in Mokichi’s office building and at the Kabuki theater. Both employ subtle ‘mystery moves’ but they also share a design counterpart — the usherettes at the theater seem to mirror the buckets along the office hallway. I assume they’re sand buckets in case of fire. Are they holdovers from the U.S. firebombings of eight years previous, or are they active civil defense precautions owing to the war being fought to the West, on the Korean peninsula?  The question is personal, as I was born on an Air Base in Tachikawa, earlier in the year. I note that behind the commercial passenger plane in the sunny airport scene, American bombers can be seen on the tarmac.