Of all the ‘depressed relationship’ dramas of the early ’70s, this may be the most rewarding. It also sports one of the longest titles on record. Paul Zindel’s award-winning play gets a marvelous adaptation for the screen, thanks to Alvin Sargent, Paul Newman and Joanne Woodward. There’s also the stealth input of the star couple’s daughter Nell Potts, whose restrained performance is the happy opposite of mawkish and maudlin. 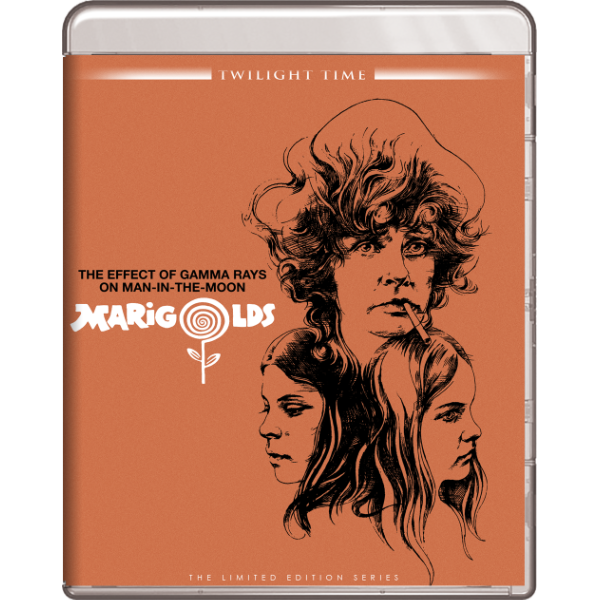 The late-’60s freedom of the movie screen brought forward all manner of hard-edged dramas: worthy play adaptations and various screenwriter’s labors of love about dysfunctional families and abusive relationships. We remember Patricia Neal in The Subject Was Roses, Joanne Woodward in Summer Wishes, Winter Dreams and Shirley MacLaine in the oppressively negative Desperate Characters. Pictures in this vein were anything but light-hearted: I Never Sang for My Father, The Heart is a Lonely Hunter. But they were real actor bait, especially for thesps hungry for an interesting character to play.

Paul Zindel’s partly autobiographical off-Broadway play The Effect of Gamma Rays on Man-in-the-Moon Marigolds had barely become a success when Paul Newman and Joanne Woodward bought the movie rights. Newman’s first directorial effort Rachel, Rachel had showcased Woodward as a spinster schoolteacher’s struggle to find love. Four years later Ms. Woodward would tackle a much less attractive character, a deeply flawed single mother at odds with everything in her life, and handling it all very badly. Screenwriter Alvin Sargent (Straight Time, Ordinary People) drops the leading character’s drug habit but retains most of the play’s rough edges. The adaptation also brings an off-stage character or two onto the screen. The place is a a depressed area of Connecticut. Unemployed housewife Beatrice Hunsdorfer (Joanne Woodward) is pushing forty and a real disaster. Mr. Hunsdorfer ditched her years ago and she’s lost all self-respect, while gathering nothing but anger for the outside world. Selfish and verbally abusive, Beatrice has had a negative effect on her high school-aged daughters, Ruth (Roberta Wallach) and Matilda, or Mattie (Nell Potts). Ruth is alternately sensitive and resentful — and she suffers epileptic fits when upset. The quiet but studious Mattie is secretly fascinated by science and waxes poetic on the makeup of the universe, as inspired by Mr. Goodman (David Spielberg). The jealous Beatrice comes down hard on Mattie, berating her for taking school seriously and openly blocking her efforts to conduct a science project about irradiated flower seeds. Beatrice also takes her personal anger out on Mattie’s pet rabbit.

Beatrice gets along with almost nobody. She takes in Nanny Annie (Judith Lowry) as an old-age boarder, and uses the silent woman as a sounding board as well. Nanny Annie’s room is the only really clean room in the house. Mattie helps out but Ruth is sickened by Nanny Annie — Beatrice’s influence is simply not healthy. Beatrice tries in vain to interest her brother Floyd (Richard Venture) in investing in a tea & cheesecake cafe. She also lets herself be picked up by an antiques dealer. After leaving her car badly parked on a country road all night, she has a talk with a policeman who happens to be an old classmate.

Mattie eventually becomes a finalist in the Science Fair, which involves a big-deal school assembly at night. When told she’s expected to attend Beatrice goes ballistic, treating the whole thing as an inconvenience. What shall she wear and what will she do with Nanny Annie? When Beatrice makes yet another insulting, angry phone call to the school, Ruth learns of the humiliating reputation that has followed her mother for twenty years: as a ‘wild’ high schooler she was known as ‘Betty the Loon.’ At the center of The Effect of Gamma Rays on Man-in-the-Moon Marigolds is Joanne Woodward’s caustic performance. Beatrice Hunsdorfer is a mess of self-loathing and anger, feeding on her own disappointment and shame. Terribly self-centered, she unloads this bile on those around her, most tragically her daughters. Ruth seems deeply harmed by her mother’s influence, and suffers nightmares that aggravate her nervous condition. Mattie is the single responsible person in the house. Even though she tries to help out, she’s the main target of Beatrice’s scorn. Yet we can see that Ruth and Mattie love their mother. Mattie takes all of the verbal abuse in silence.

All in all this story is just as negative as some of the other ‘no solution’ dramas of the time, yet Gamma Rays does not feel as cynical or hopeless. Ruth and Mattie learn more about their mother, and both may come to understand her better. The text of the play shows Mattie insisting on a good view of life, as she puts forth her positive ideas about science and the world. She’s resilient, and definitely not defeated.

Even Beatrice makes some personal progress. She once again gets drunk at the wrong time, and her heartfelt oath — “My Heart is Full” comes out entirely the wrong way. But Beatrice does seem to realize that Mattie’s ambitions are not stupid, and that she has done wrong by not providing what her child needs. Yet the play feels uncompromised — the characters generate these feelings at a point where Beatrice has committed a vicious, cruel act. We’re grateful that the show does not finish in a violent rebellion. The drama cautions us to be more thoughtful before classifying some people as low-lifes; everybody has a story. It also reminds us of a key parenting role: Don’t measure your children by your own limitations: Let Them Be Better Than You Are. I’m lucky that my children’s idealism and clear-mindedness inspired me to see the world as a more hopeful place: I’m a better person because of them.

Joanne Woodward received a Cannes Best Actress Award, but the film mostly received quiet praise. Newman and Woodward can definitely be praised for not turning the finish into an overblown, feel good triumph, with Mattie becoming a superstar student winning a glorious scholarship, etc. Instead the awards ceremony is tempered by a competing student, whose non-scientific experiment consists only of a rather sadistic explanation of how she skinned a cat and assembled its skeleton for a display. Her follow-up triumph will be to do the same thing to a dog. Distributor 20th Fox liked prestige items but probably would have preferred Newman to give the show a commercial, upbeat finish.

Never having looked into the story behind Gamma Rays, I was surprised to discover that actress Nell Potts is Newman and Woodward’s daughter, Elinor Newman. She played in only two of her father and mother’s pictures and is now better known as a founder of the ‘Newman’s Own’ line of grocery products. The talented Roberta Wallach is the daughter of Eli Wallach and Anne Jackson. For once, hiring relatives comes off as a smart move. The Twilight Time Blu-ray of The Effect of Gamma Rays on Man-in-the-Moon Marigolds is a great transfer of this unassuming, intermittently disturbing show. I’d only seen it on old TV broadcasts in grainy flat prints; Adam Holender’s cinematography slaps us right into a mindset of domestic decay. I’d not forgotten the image of Beatrice, parked across from the school, smoking as she goes through the want ads. Or Ruth at school performing a great skit lampooning her mother, not realizing that Beatrice is already known as a nutcase, a laughingstock.

Twilight Time gives Maurice Jarre’s score its own isolated music track. The cover illustration is a major improvement on the film’s original poster, which features an unpleasant photo of Beatrice screaming into a telephone. Julie Kirgo’s liner notes in the insert pamphlet pay homage to Paul Newman’s smarts as a director — he’s doing a lot more than just providing a showcase for his actress spouse.