Guest reviewer Lee Broughton offers an assessment of one of the Shaw Brothers’ quirkier and more idiosyncratic historical martial arts efforts: an action-packed Meng Hua Ho wuxia flick from 1976 that concerns an irredeemable killer sent on a mission to save the life of a despicable and hated tyrant. Outstanding fight choreography, unusual weaponry and unpredictable plot twists help make this frenetically paced show a winner. 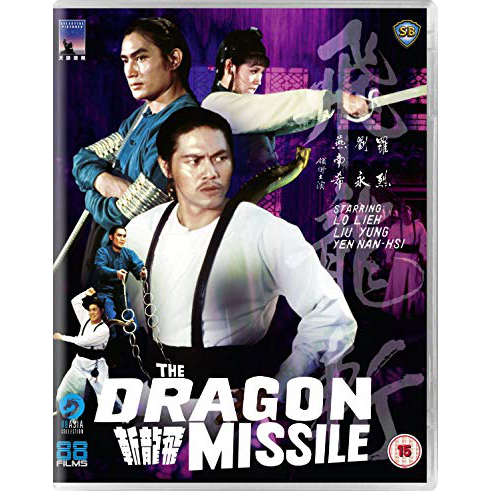 When his own physicians fail to provide him with any relief for the pain caused by the gigantic festering boil on his back, an evil and corrupt governor, Lord Chin Quan (Ku Feng), kidnaps the Emperor’s own doctor, Fu (Li Jen Ho), and forces him to make a diagnosis. The prognosis is not good. If Quan isn’t treated with the ashes of an ultra- rare herb within a week he’ll be dead. Quan quickly sends his trusted bodyguard-cum-executioner Sima Jun (Lo Lieh) on a desperate dash to retrieve a supply of the herb from a noted physician, Tan Yue (Yang Chi-Ching).

However, Sima Jun’s mission soon becomes more complicated than he had initially anticipated. Firstly, the governor’s duplicitous chief councillor, Yang (Min Min), wants the glory and the riches that the governor has promised to Sima Jun for himself and so he arranges for six deadly mercenaries to accompany the bodyguard. They have orders to kill Sima Jun as soon as the herb has been secured. Secondly, the physician and several locals refuse to assist Sima Jun in the hated governor’s cause, which results in the bodyguard killing a number of innocent people. As a consequence, he soon has two vengeance seekers, Tieh Erh-Lang (Tony Liu) and Tan Li (Nancy Yen), on his tail.

The Dragon Missile is a novel wuxia film that completely upends the character relations and moral dynamics that are typically found in such films. Lord Chin Quan is an evil man and Sima Jun is a callous killer who is quick to deploy his “dragon missile” bladed boomerangs whenever he’s ordered to dispose of the innocent folk who displease his vindictive master. He’s hardly a sympathetic character — and he becomes even less so when he starts coldly executing the elderly local folk who bravely choose to stand in his way — but we can’t help but become interested in his fate when Yang orders his mercenaries to kill him upon completion of the mission. The mercenaries are a typically scuzzy bunch of lowlifes who are distinguished by their lone female member, Sha Sha (Terry Liu), a femme fatale who has extendable metal spikes built into her fingers.

Once the herb is secured, the bulk of the film’s larger middle section plays like a variant of the popular treasure hunt-themed Spaghetti Westerns that were popularised by Sergio Leone’s The Good, the Bad and the Ugly (1966). Just as soon as Sima Jun acquires the herb a curious passerby, our nominal good guy Tieh Erh-Lang, employs lightning fast speed and “iron finger” skills to snatch it from under his nose. When Sima Jun retrieves the herb, the mercenaries fight amongst themselves in their efforts to steal it from him and he in turn enters into a couple of shaky alliances with untrustworthy members of the group. Just like Blondie (Clint Eastwood) in the Leone film, Sima Jun is smart enough to withhold some vital information about the herb in order to grant himself a much-needed but ultimately short-lived advantage.

We get some more Spaghetti Western influenced action when Tieh Erh-Lang and Tan Li hit the vengeance trail. In what plays like an episode from a revenge orientated genre entry such as Giulio Petroni’s Death Rides a Horse (1967), Tan Li takes out one of the mercenaries when she spots her murdered father’s snuff bottle about his person. And when Tieh Erh-Lang and Tan Li ride into a town in pursuit of Sima Jun, they track him down after spotting his horse tied up outside of a watering hole. The film’s series of shaky alliances is taken even further when Sha Sha ingratiates herself with Tieh Erh-Lang and Tan Li and works alongside them for a spell. Interestingly, Fu-Ling Wang’s dramatic music draws upon Western motifs from time to time too.

The Dragon Missile was apparently completed on something of a rushed schedule when the Shaw Brothers became aware that a rival studio’s upcoming wuxia flick — Yu Wang’s Master of the Flying Guillotine (1976) — featured a weapon that functioned in a similar manner to Sima Jun’s flying blades. Perhaps as a consequence, there are one or two short sections of the show where the quality of its technical aspects does dip a little. But, truth be told, we’re hardly given the chance to notice or dwell upon the odd technical shortcoming here. The Dragon Missile rattles along at a truly frenetic pace and we’re never too far away from an interesting plot twist that leads to a fight or confrontation of some description. And when the fight choreography is as impressive as it is here, that’s a real boon.

Also working in the show’s favour is the fact that we’re never quite sure what’s going to happen next. Unexpected, disturbing and upsetting acts of casual violence dominate the early portion of the film. Later in the show we meet a number of unassuming and seemingly incidental characters who quickly surprise us by revealing themselves to be talented martial artists. In addition, some of The Dragon Missile’s main characters are apparently able to intermittently draw upon some startling super human powers.

There are also some pretty quirky and intriguing weapons on display. The deadly “dragon missiles” are essentially bladed boomerangs that can cut through anything (stone, wood, bone and so on) in their flight path and the numerous sequences that feature them in use are really well executed. But they’re not the strangest weapons here. Tieh Erh-Lang uses a chain of outsized steel rings that becomes a rigid mass of metal when flicked into a particular configuration while Sha Sha is able to extend lethal metal spikes from within her finger tips.

But the film’s most pleasing aspect is perhaps its ability to elicit a good range of emotional responses from the viewer while keeping them in a genuine state of suspense with regard to how things might pan out for the show’s main characters. Rooting for Sima Jun would be akin to rooting for Angel Eyes (Lee Van Cleef) in The Good, the Bad and the Ugly and yet there are times when the circumstances that the bodyguard finds himself in towards the end of the film do draw some sympathy. We feel fairly certain that good will out in the end but the film’s final section still manages to throw up a few surprising narrative twists and turns.

The quality of the acting here is as good as — and sometimes better than — it needs to be for this kind of show and Lo Lieh really impresses as Sima Jun. Many will know the actor from his turn opposite Lee Van Cleef in Antonio Margheriti’s fun East meets West Spaghetti Western The Stranger and the Gunfighter (1974) in which he played the most self-effacing, polite and moral martial artist ever to wander the West. So it’s really something to have him successfully pulling off a particularly villainous role here. The strong codings of good or evil that are assigned to The Dragon Missile’s characters make this a fairly melodramatic show at times. But while this allows Ku Feng to adopt a pantomime villain-like approach in his role as the governor, Lo Lieh plays his brooding bad guy straight and he’s all the more menacing for it.

A number of the show’s exterior scenes possess the quite impressive but obviously studio bound look that is common to most Shaw Brothers productions from this period. However, in keeping with the film’s Spaghetti Western-like vibe, there are quite a few sequences that feature horseback chases and suchlike and these are shot in expansive real locales. There’s also some good location work that takes advantage of the atmospheric rock formations found on a very craggy coastline. The occasional minor technical deficiency notwithstanding, The Dragon Missile is probably the most enjoyable, involving and compelling action flick that I’ve come across in quite some time.

88 Films’ Region B Blu-ray of The Dragon Missile ticks all of the right boxes, picture quality wise. Indeed picture quality here is near enough excellent. There are just one or two long shots present where a warped camera lens appears to have been used but that seems to be a common feature in a number of Shaw Brothers flicks from this period and is obviously inherent to the show’s original cinematography. I watched The Dragon Missile in its English language dub version (a Chinese language track supported by optional English subtitles is also present) and while it possesses the usual shortcomings that tend to bedevil the English dub tracks that accompany East Asian films it didn’t spoil my enjoyment of the show at all. The sound quality of both the English and the Chinese language audio tracks is very good overall.