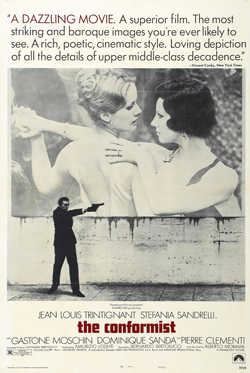 Bernardo Bertolucci’s glamorously beautiful investigation into the ugly nature of fascism (both political and emotional) is one of the great movies of the 70’s.  Set in the early 30’s, Jean-Louis Trintignant stars as a hired killer working for a clandestine fascist organization who finds himself ordered to assassinate a friend. Bertolucci’s hypnotic, seductive camera movements, combined with his new wave sensibilities, established him as a force to be reckoned with. The ravishing cinematography is by Vittorio Storaro and Georges Delerue composed the elegiac score.