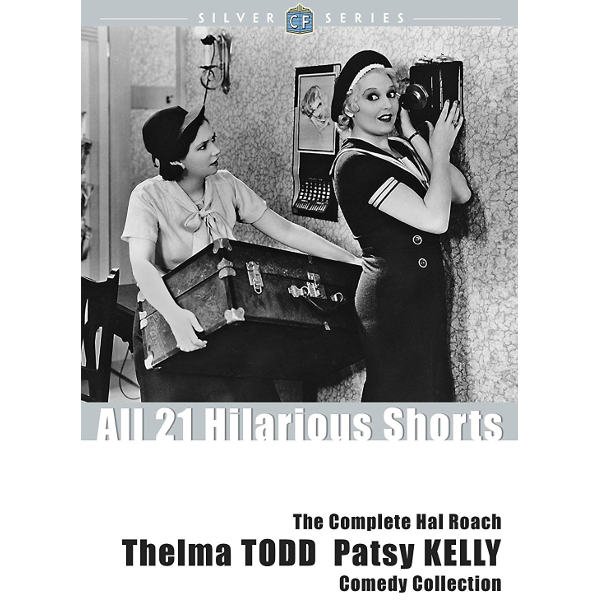 Hal Roach made the movie game pay big even back in the ‘teens, when Los Angeles used zoning laws to force moviemakers away from downtown, into the remote ‘suburbs’ of Hollywood and Culver City. Taking a choice piece of Culver City real estate, Hal built a veritable empire of comedy, mostly with short subjects. He helped launch the great Harold Lloyd, invented and maintained the popular ‘Our Gang’ series and was the producer who teamed up Laurel & Hardy, his biggest success. Roach released through MGM in the 1930s and then with United Artists; his only major business faux-pas was a brief business partnership with the son of Benito Mussolini, an Italian fascist, just as war was breaking out in Europe.

Roach never left a possibility unturned, and spent the 1930s developing a female version of Laurel & Hardy for the then- lucrative short subject market. The trick was pairing the right two actresses. The go-to glamour girl was Thelma Todd, a drop-dead gorgeous fashion plate comedienne who memorably served as eye candy in two Marx Brothers features. She also popped up in interesting roles in dramas: William Wyler’s Counselor-At-Law, Clara Bow’s Call Her Savage. Very popular in and around the Hollywood scene, Thelma was considered a class act. She managed her own showcase cafe out on the Pacific Coast Highway.

Roach first paired Thelma Todd with Zasu Pitts, the brilliant silent film actress who when sound came in turned more to comedy, playing nervous, high-strung types. Their seventeen two-reelers found popularity between 1931 and 1933, when they broke up over a salary dispute. Pitts’ legacy was permanently damaged in the 1960s when the Tonight Show host Johnny Carson used her name in skits, just because it sounded funny to say next to the names of other former silent stars, like ‘Gustav von Seyffertitz.’

A master of the mix & match school of casting, Hal Roach saw no need to end the series. He replaced Pitts with young Patsy Kelly, a brash, fast-talking Vaudeville comedienne. Definitely not a looker, Kelly nevertheless floored audiences with her game smiles, fast wisecracks and saucy put-downs. The 21 Todd-Kelly short subjects between 1933 and 1936 mostly use the same comic chemistry. The girls ‘play themselves’ with their own names. Thelma is poised and gracious, even when they’re looking for jobs or otherwise down on their luck. She’s not particularly bright and tends to be a little gullible. Patsy is a troublemaker who somehow turns every situation into a problem. Distrustful of everybody, she has a bad habit of picking fights, just for the fun of it. Equally a bit dim in the brains department, the excitable Patsy easily goes out of control. The Complete Hal Roach Thelma Todd Patsy Kelly Comedy Collection stretches across three discs. Compared to typical short subjects by smaller outfits, the Todd-Kelly shows have lavish production values. Many scenes are filmed on local Los Angeles streets, giving location hunters a field day (I’ve had my eye peeled on short subjects for years, hoping someday a show would pop up filmed on my block of Gower Street!). As a two-reeler lasts between sixteen and twenty minutes, the shorts have time for two or three developed scenes, giving Patsy a chance to work up a comedy routine. Thelma tends to be the Straight Girl of the team. They aren’t committed bachelorettes, as each is occasionally linked with a possible romance, even if only a gag. Some shorts see them interested in millionaire- hunting, although Thelma is never a gold digger in the predatory sense.

Roach’s writers rely on the standard formulas to put the girls into new situations. Some of the same supporting character actors show up, probably Roach regulars and holdovers from the silent era. Roach had the reputation of loyalty to a large group of actors typed in lowbrow comedy. Occasional ‘name’ performers show up, like Billy Gilbert and Esther Howard — all but the most famous character actors likely pursued the goal of working as many days per year as possible. A funny short set in a radio station is noted as the first appearance of Roy Rogers, unbilled, as a lead singer of the Sons of the Pioneeers; from what I could tell, he’s on screen for approximately three seconds, as most of the act is heard from the next room. Patsy gets a chance to dance in the episode.

Roach uses a lot of special effects for certain shows, as with a good short about an airplane rigged with ejection parachute seats. The very first short stages several car fender-benders, as Patsy slowly demolishes a new roadster in a Laurel & Hardy-like game of tit for tat. We strain to recognize some locations, but the first short also features many views of UCLA and Westwood in 1933. Both Westside attractions are surrounded by plenty of vacant lots.

Yet another short would seem an inspiration for Jacques Tati — Thelma and Patsy are roped into demonstrating a newfangled washing machine in an elaborate department store window display. A crowd gathers while, naturally, the two ever-so-gracefully destroy everything.

Here’s ClassicFlix’s official rundown on the twenty one shorts.

Backs to Nature (1933, 19:22) – Hoping for a good rest, the girls go camping in the woods. With Don Barclay, Alice Belcher and Charlie Hall.

Air Fright (1933, 18:36) – Thelma and Patsy are “air hostesses” during a flight to test an experimental parachute. With Don Barclay, Billy Bletcher and Wilfred Lucas.

Babes in the Goods (1934, 19:00) – The girls get locked in a department store window overnight. With Arthur Housman and Jack Barty.

Soup and Fish (1934, 17:50) – The girls are mistakenly invited to a swank affair and become the life of the party. With Billy Gilbert, Gladys Gale, Don Barclay and Charlie Hall.

I’ll Be Suing You (1934, 18:18) – The girls are responsible for hitting a truck, but an ambulance chasing lawyer makes them think otherwise. With Eddie Foy Jr., Benny Baker and Fred Kelsey.

Three Chumps Ahead (1934, 18:35) – Thelma falls for a smooth-talking shyster, but Patsy sees right through him. With Benny Baker, Eddie Phillips, Frank Moran and Billy Bletcher.

Opened by Mistake (1934, 18:46) – Patsy loses her job and apartment and barges in on Thelma at the local hospital where she lives and works as a nurse. With Nora Cecil, Charlie Hall and William Burress.

Done in Oil (1934, 17:54) – Thelma poses as a famous artist to try and sell some of her paintings. With Arthur Housman, Eddie Conrad, Leo White, Art Rowlands and William Wagner.

Bum Voyage (1934, 19:55) – The girls get free tickets on a cruise, but soon find out their presumed identities are as gorilla tamer and assistant. With Adrian Rosley and Noah Young.

Sing Sister Sing (1935, 20:10) – Patsy is invited to room with Thelma, but they don’t get along. With Arthur Housman, Harry Bowen and Charlie Hall.

The Tin Man (1935, 14:47) – Lost while driving, the girls stop and ask for directions at the house of a mad scientist who is bent on the destruction of the opposite sex. With Clarence Wilson and Matthew Betz.

The Misses Stooge (1935, 18:48) – After losing their jobs as hoofers, the girls are recruited by a magician to be in his act. With Esther Howard, Herman Bing, Rafael Storm and Henry Roquemore.

Slightly Static (1935, 18:20) – Looking for a job in radio, the girls land a break when other performers walk out just before air time. With Sons of the Pioneers (including Roy Rogers in his first screen appearance), The Randall Sisters, Harold Waldridge, Dell Henderson, Nora Cecil and Carol Hughes.

Twin Triplets (1935, 20:29) – Patsy gives news reporter Thelma a hot tip about sextuplets being born and they concoct a plan to use the story as a means to land on easy street. With Greta Meyer, John Dilson, Billy Bletcher, Bess Flowers, Charlie Hall, Grace Goodall, James C. Morton and Charley Rogers.

Hot Money (1935, 17:23) – A crook asks the girls to hold $50,000 in cash, but when he winds up dead, everyone in the girls’ apartment building is a suspect. With James Burke, Fred Kelsey, Louis Natheaux and Brooks Benedict.

Hill-Tillies (1936, 17:52) – Out-of-work showgirls Patsy and Lyda hatch a scheme to get free publicity by camping out in the forest without any modern conveniences. With Toby Wing, Harry Bowen, Sam Adams, Jim Thorpe and James C. Morton. The bonus shorts attempt to continue the series after Thelma Todd’s unexpected death in December of 1936. It took place in the garage of the ex-wife of Todd’s former lover Roland West, just a block or so from her beach cafe in Pacific Palisades. Most references now list the death as a possible suicide but more likely an accident of carbon monoxide poisoning. Stories once circulated that Todd was involved with gangsters and that her death was a murder. Those theories eventually dried up, as did some of the more salacious ‘Hollywood Babylon’ scandals, as better research cleared away the gossip cobwebs.

A small group of friends certainly knew about the mystery death. Between other jobs, we worked off and on at Paulist Productions, a religious film company that in the ’70s occupied Todd’s former Pacific Palisades cafe — which we were told had been a nightclub.

Actually, the rumors we heard were so exaggerated that the cafe became a speakeasy (what, after the repeal of prohibition?) frequented by dangerous characters. The building’s castle-like interior had such character that it was easy to believe such tales. Until the internet days made it easier to find decent information (if one were careful), we thought that Todd had died on the premises. The buzz was that the building was haunted.

The collection includes three of the four post-Todd Patsy Kelly short subjects. The fun Pert Kelton made just one short. She doesn’t seem a particularly good fit for Patsy. Kelton became more famous as Jackie Gleason’s first Alice Kramden on TV’s The Honeymooners; she’d lose that gig to the blacklist.

The other nominated Thelma Todd replacement is the unusual Lyda Roberti, a child of the Russian Revolution who came to show business via Shanghai. Roberti’s exotic accent is heard coming down a ship’s gangplank as she’s introduced singing in At Sea Ashore; her mispronunciation of English words is initially funny, but doesn’t seem like the kind of gag that could sustain a character for very long.

Patsy Kelly’s film career went into a decline; we’re told that for a time she worked as Tallulah Bankhead’s personal assistant. She got a new lease on comedy with the arrival of TV. Although she appeared in numerous TV shows and had guest spots in Disney pictures, film fans best know her indelible character turn as the loathsome, slovenly Laura Louise, the witch that babysits poor Rosemary Woods in Roman Polanski’s Rosemary’s Baby.

ClassicFlix’s 3-disc DVD set The Complete Hal Roach Thelma Todd Patsy Kelly Comedy Collection does a major service for 30s comedy cinema, giving us an entire run of Roach comedies to study. These are the kinds of shows that appear at Cinecon, but otherwise might be forgotten.

The quality is fine. The shows are licensed from a company called Sonar Entertainment, so I’d imagine the rights went in a different direction from other former Hal Roach productions, such as the features now distributed on disc by VCI. Someone (MGM?) clearly stored the elements well enough; none of the Todd-Kelly titles are missing. Of the thirteen I saw, I ran into none in which the image or sound was degraded.