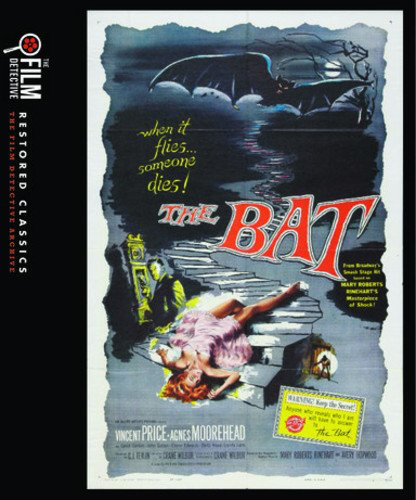 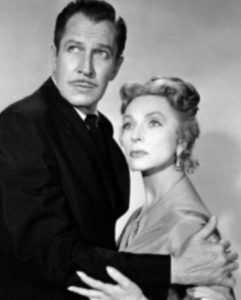 Released during the dog days of summer in August of 1959, The Bat was an air-conditioned summer treat for the  eight year-old unprepared for a blood and thunder horror movie – even if this mild thriller does star that consummate killer Vincent Price and Agnes Moorehead as a novelist who dabbles in murder – the more gruesome, the better.

Price plays Malcolm Wells, a small-town doctor who’s just witnessed the confession of one John Fleming, a larcenous bank president who’s embezzled a fortune from his own vault. Knowing an opportunity when he sees it, Wells promptly shoots Fleming and sets off to find the loot, hidden in a creaky mansion called The Oaks. Waiting for him is Cornelia Van Gorder (Moorehead), a specialist in pulp fiction unaware that the plot for her next thriller will write itself over the coming days and stormy nights. 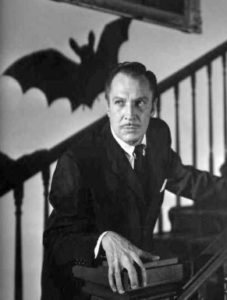 Wells isn’t the only cutthroat searching for the bankroll – a “fantastic criminal” known as The Bat haunts the place with the same goal in mind. The phantom cuts quite the stylish figure, clad in a fedora, black turtleneck and stainless-steel talons just right for cutting through a window pane or a young woman’s neck.

Once Cornelia and her maid Lizzie (played by Lenita Lane) are settled in the cavernous old house, The Bat gets right to work, slicing his way through the front door and slipping a real, live bat over the bedroom transom where it promptly bites the housekeeper. In record time Dr. Wells is on the scene to treat the hysterical woman only reinforcing the notion that Wells himself might be the masked killer. Is he? As Frederick Loren would say, “Could be…” 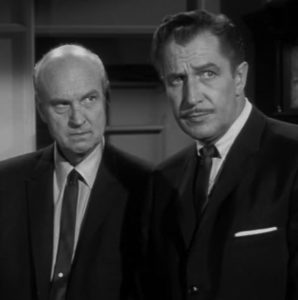 There are plenty of other suspects to contend with and the house is crawling with them, from the butler with the shady past to the suspiciously folksy Gavin Gordon as Detective Anderson, so beloved by the townsfolk they call him “Andy.” There is also a small army of sitting ducks just ripe for The Bat’s pincers including Elaine Edwards as Cornelia’s stenographer and special-guest victim Darla Hood, eighteen years after her final Our Gang appearance, 1941’s Wedding Worries.

Though the movie is ghoulishly light-hearted Crane Wilbur’s direction is heavy-handed and his dialog doesn’t help – you could drive a truck through the awkward pauses as the actors struggle to get through the clunky exposition. A crime greater than any perpetuated by The Bat; Wilbur saddles Moorehead and Price with the worst kind of formulaic banter during their scenes together. The duo were bonded in more than their richly theatrical acting styles, they were both proud children of St. Louis and The Bat remains their only appearance together (they shared billing but no scenes in 1957’s The Story of Mankind). They – and the film itself – would have benefited from screenwriter Robb White’s acerbic touch – he supplied the memorable repartee for Frederick Loren and his houseguests in that same year’s House on Haunted Hill. 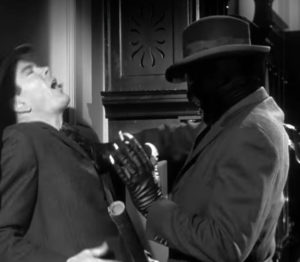 This was an oddly old-fashioned vehicle to hit theaters at the time – a notion that was enhanced by the shocking arrival of Psycho just 12 months later. The movie’s white bread appeal might be part of the story’s staying power. The film is based on Mary Roberts Rinehart’s The Circular Staircase, first published in 1907. The book was filmed in 1915 under the same title and directed by Edward J. Le Saint. A stage version, now titled simply The Bat, was produced in 1920. In 1926 Roland West directed a filmed version of the stage play and came back to the well four years later with The Bat Whispers starring Chester Morris as the title character. In 1956 a cliff notes version of the story was broadcast on TV’s Climax starring Judith Anderson. Another televised version popped up in 1960 on the March 31 edition of the Dow Hour of Great Mysteries with Helen Hayes and Jason Robards Jr.

Released on Blu ray by The Film Detective in 2015, the disc sports a terrific transfer of Joseph Biroc’s cinematography – the shadowy interiors are sublime and there’s a shot of a gleaming Lincoln Continental that is positively showroom-worthy.

Here’s the Dow Hour of Great Mysteries broadcast of The Bat: