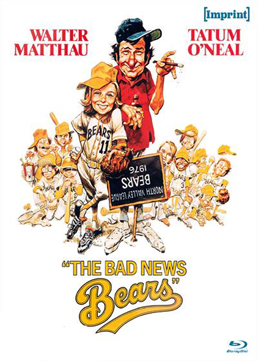 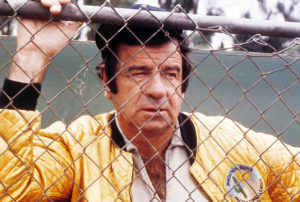 W.C. Fields’ final screen appearance was a brief walk-on in Sensations of 1945, an overloaded variety show that barely found time for the great man. As usual Fields had the last laugh—thanks to his life-long aversion to authority, the comedian enjoyed a brief renaissance in the 70’s when his films were showcased at revival houses alongside those other counterculture champions, the Marx Brothers. Morris Buttermaker, the obstinate antihero of Michael Ritchie’s The Bad News Bears, is a W.C. Fields for The Me Decade. Like Fields, Buttermaker is a hard-drinking vagabond (he roams the San Fernando Valley cleaning swimming pools), boasts a tomato-shaped proboscis, and has little use for the world or its inhabitants—who else but Walter Matthau to play this slouching, grouching deadbeat. Even a puffed-up mountebank like Fields was a fashion plate compared to Buttermaker, who shows up on the first day of his new job in a ghastly polyester golf shirt and Farah slacks. He’s up early this particular morning, flask in hand and beer in the backseat, to begin coaching a squad of middle-school ballplayers that exists only because, like Buttermaker himself, no one else will have them. 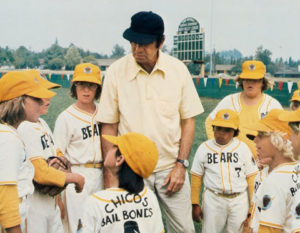 It’s not immediately obvious to the coach and his new team, but they’re custom made for each other—the kids are all pint-sized Butterworths, ready to give as good as they get—except when it comes to actually playing the game. Little Chris Barnes is Tanner Boyle, a hapless shortstop and world-class cusser. Erin Blunt plays Ahmad Abdul-Rahim, a fleet-footed outfielder who worships Hank Aaron but is better suited to running the base paths. Alfred Lutter is Alfred Ogilvie, a human calculator who’s also a whiz at formulating baseball strategies—it’s a diverse bunch of misfits and they help Ritchie’s comedy walk, run, and slide that thin baseline between gritty and heartwarming. 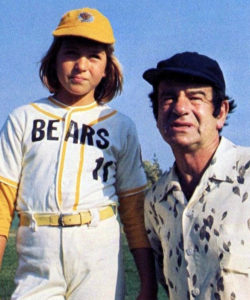 The Bears begin the season by channeling the ’62 Mets—they’re so miserable that Buttermaker forfeits the game (it’s 26 to nothing, disadvantage Bears). So the coach, like any hard-boiled competitor, juices the team, not with steroids but two ringers; Jackie Earle Haley is Kelly Leak, a scrawny Harley-riding hood with grown-up athletic ability and Tatum O’Neal plays Amanda Whurlitzer, a quixotic tomboy with a lethal fastball. The Bears naturally have their school yard bullies to deal with but so does Morris, in the form of Roy Turner, coach of the Bears’ bête noire, the Yankees (junior division). Expertly and ominously played by a glowering Vic Morrow, Turner has more anger issues than the usual sports dad and and is fully capable of humiliating anyone at anytime, including his own son.

The attraction of most sport films is that while the story conflicts take place off the field, they’re usually resolved on it—and Ritchie’s film is no different. Intriguingly, there are no scenes of Butterworth, Turner, or the Bears, in their own homes. There are a few moments inside a seedy Valley bar and a drably lit Pizza Hut but other than that, Morris and friends seem to live out of doors and usually at the ballpark. Rather than accentuate the movie’s sunny nature it adds to the movie’s poignant undercurrent—these folks would rather be anywhere than home. The screenplay was written by Bill Lancaster (Burt’s son) who knew whereof he spoke; his Little League days were complicated by a bum leg yet he persevered—his script is so good that it sounds improvised (though a few of the kids’ insults are a little too artfully detailed to roll off the tongue of a 5th grader, let along any garden variety adult who isn’t a screenwriter). 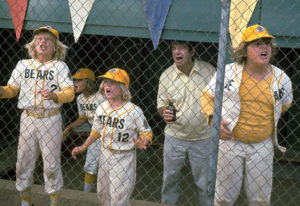 This was Ritchie’s first film after the wonderful Smile where he took a similarly footloose approach to the beauty pageant biz. His understated style works in harmony with the actors who all benefit—especially Matthau who was never one for histrionics anyway. And kudos to Matthau/Buttermaker—he never goes soft (even Fields went dewy-eyed on more than one occasion). Buttermaker’s heartfelt reaction to the Bears’ objections to their uniforms? “These are the things you little creeps have been bitching for…” The 1976 film also takes time to celebrate Buttermaker’s embrace of the 24-7 cocktail hour—in almost any other decade such excess would not go unpunished; in 1936 a handy church would have fallen on poor Morris, in 2021 he would drive off an embankment, inspiring the teary-eyed team to win the championship game in honor of their late coach whose untimely death is a lesson for baseball-loving dipsomaniacs everywhere. All hail the seventies.

Jerry Fielding, Sam Peckinpah’s perennial composer, shows up in an ironic mood, sampling Bizet to score his satirical points. And that shape-shifting cinematographer John Alonzo frames the San Fernando valley through a wave of humidity and dusty sunlight—try squaring that with his luxurious, shadow-drenched work on Chinatown.

The Australian company Imprint has just released Ritchie’s good-natured classic on Blu ray with a very fine picture and a new audio commentary from film historian Scott Harrison who give a detailed account of the production along with esoteric tangents about the ever-changing Paramount logo and other film geek concerns. The first 1500 copies are available in a slipcase with Jack Davis’s poster art on the  outside—inside is a by-the-numbers Photoshop cover produced by some worker ant in the home video colony—Mr. Davis’s work on the other hand is a home run.