John Huston’s primal heist film is an almost perfect movie, with a score of unforgettable characterizations. A solid crime noir, it concerns itself with the human ironies in the ‘left handed form of human endeavor.’ 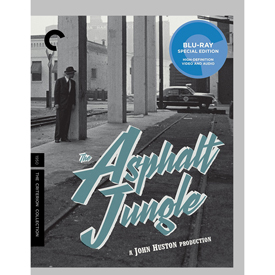 Talk about a film that becomes only more enjoyable with each viewing…   John Huston’s The Asphalt Jungle is the Singin’ in the Rain of noir masterpieces. A bent for realism enhances a completely non-glamorous look at the seedy underside of big city criminality circa 1950. What MGM production head Louis B. Mayer considered an ugly story that didn’t belong on a screen is one of the best movies MGM ever made.

John Huston could be uneven at times but this movie is nearly flawless. A terrific cast brings W.R. Burnett’s vivid gallery of characters to life, and Huston’s sympathetic direction emphasizes their humanity. It’s a story of ‘the perfect crime’ undone the usual way, by imperfect people and unforseen mistakes. There are no absolute villains. Even the double-crossing attorney is acting out of desperation. He philosophically tries to defend crime as “A left-handed form of human endeavor.” Some of John Huston’s movies follow the same theme. A couple of men (or a small group) come together to accomplish some task, whether it be finding gold, opening Japan to trade, assassinating a dictator or saving elephants. It all comes to naught with the lesson that the best plans of mice and men are an existential joke, with a sacrifice and suffering chaser. 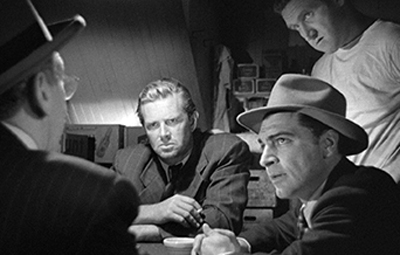 Doc Erwin Riedenschneider (Sam Jaffe) is an ex-con and a criminal mastermind. He blows into town with a caper that the local hoods can’t resist. Bookie Cobb (Marc Lawrence) sets up the deal with big-time crooked lawyer Alonzo D. Emmerich (Louis Calhern) and hires hunchbacked diner owner Gus Minissi (James Whitmore) as the getaway driver. Riedenschneider personally chooses Dix Handley (Sterling Hayden) as the muscle for the job, intrigued by the man’s sense of personal honor. Rounding out the gang is Louis Ciavelli (Anthony Caruso), a family man who’s also a top safecracker. Unfortunately for all, Emmerich is hatching a doublecross with his debt collector Bob Brannom (Brad Dexter). He plans to take the loot and skip with his mistress Angela Phinlay (Marilyn Monroe).

Everybody is in tip top form in The Asphalt Jungle. Sterling Hayden’s hooligan has intellectual limitations but becomes fast friends with the “screwy little kraut” Doc Riedenschneider, one of Sam Jaffe’s best roles. James Whitmore doesn’t strive for affection and the usually venal Marc Lawrence (Cloak and Dagger) shows his character flaws so clearly that we sympathize with him even when he rats out his partners. There was always something unlikeable about Louis Calhern; Huston gives him the role of a lifetime, a big wheel near the edge of disaster who can only look wistfully at luscious Marilyn Monroe, the mistress he’ll be losing for good. “There will be other trips,” he assures her. Jean Hagen makes a terrific impression as Doll Conovan, the burlesque performer with loose eyelashes and low self-esteem. Doll’s relationship with Sterling Hayden’s uncomprehending tough guy is beautifully understated.

Honor Among Thieves may be a myth, but in Huston loyalty between friends is a cherished state of being. Dix and Reidenschneider share almost nothing in common but are a dynamite team. Minissi is true blue to all of his associates. And Doll Conovan sets aside all of her personal problems for Dix, a guy who takes her almost completely for granted. We only receive hints of her unhappiness — she must take pills to get to sleep at night. 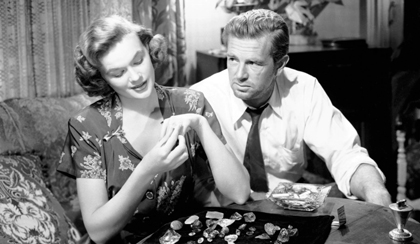 There’s nothing vague or weak about The Asphalt Jungle. The cinematography is expressive and Miklos Rozsa’s nervous score — great noir music — rises to an almost cosmic emotional pitch. John Huston gets to the core of his characters with little fuss. He knows how to turn his story on a dime with telling details, such as a dramatic move into a set of venetian blinds that reveal a pair of nosy state troopers. There are a lot of close-ups and yet the film never feels claustrophobic. We care intensely about all these people, all of whom seem trapped in situations with no honest exit. The too-clever plotting and trick psychology of many noirs is absent; Huston transcends the noir universe. This is a solid, modern picture that I can’t help but over-praise.

Ben Maddow adapted the novel with Huston, but we’re told that much of W.R. Burnett’s street jargon was retained unchanged. It sounds coarse without the benefit of four-letter words, although Handley’s protest that Cobb has “boned him” with an insult sure plays like profanity. The caper is approached in high noir style, with the various helpers paid flat rates for their services. Whitmore’s Gus and Hayden’s Dix are common crooks with a sense of honor that we’re compelled to admire, and Sam Jaffe’s pragmatic fussiness makes an excellent contrast. He’s cool as a cucumber when confronted with trouble, but he has this little character weakness for underage girls, you see…

Huston stages action with classic simplicity. The couple of gun skirmishes are over so quickly, we hardly know what’s happened. In the big showdown over the stolen jewels, we relish the sparks that are struck between Hayden and surly crook Brad Dexter. Their face-off is sharper than any between ‘pros’ in a Howard Hawks movie; Dexter is so good at being oily and repugnant that from this point on he specialized almost exclusively in such parts. Even in The Magnificent Seven we never liked him much.

The Asphalt Jungle has three supporting female characters. Emmerich’s sick wife is desperate for affection, Ciavelli’s suffering mother is worried for her children, and the kept girl Marilyn Monroe always seems ready for bed. She says impetuous things like, “Yipe.” Disaster is on hand for all of them and most of our main cast as well. For an annihilating melodrama the show has no throwaway characters — we feel for each and every one.

Huston and Maddow’s screenplay depicts a corrupt cop (Barry Kelley) as a rogue exception to the rule, not a common occurrence. The old story was that the Production Code entreated MGM to add a scene in which John McIntire’s retribution-minded police commissioner speaks on behalf of the police forces that defend us against the violence of the underworld. McIntire’s tirade is perfectly positioned. Just when our favorite characters are at their most desperate extremes, McIntire comes off as cruelly biased. He calls Dix a dangerous, merciless animal when we know he’s a delirious lost soul racing down a road to nowhere without, as a doctor says,“…enough blood in him to keep a chicken alive.” The finale takes place in a idyllic countryside that our characters surely know only as a rumor. For Dix Handley it’s a hallucination from out of the past. Dix is a loser and a bum, but Burnett and Huston elevate him to a tragic figure surrounded by phantoms of the animals he loved all his life. It’s a transcendent finish.

The Asphalt Jungle is considered the first caper picture, a crime film centered on the commission of a single make-or-break heist. French director Jean-Pierre Melville was so enamored of this film that he dedicated much of his career to tales of doomed criminals haunted by their own codes of conduct. Even his saga of the French resistance, Army of Shadows owes much to this great picture. If too many noir tales seem like mannered fare with detectives spouting absurd hardboiled dialogue, Huston’s film will show you what it’s all about. 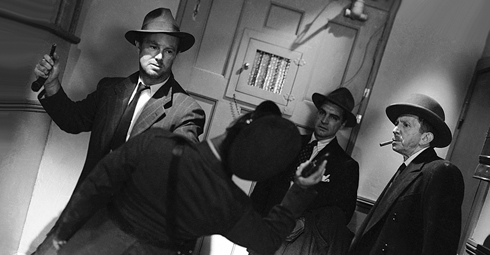 The Criterion Collection’s Blu-ray of The Asphalt Jungle is a big improvement on the old DVD from 2004 — various scratches, bad splices and unsteady shots have been straightened out, and the added detail shows every pockmark and wrinkle in actors’ unglamorous faces. The only copy I’ve seen that looked better was an MGM studio print back in the early ’70s. They’d spring thrillers on us like this one or White Heat or Night and the City at UCLA’s Melnitz Hall, and we’d walk out with our knees wobbly, thinking that the world was a heartless Detour into a Dark Corner where Nobody Lives Forever.

The only reason I can think to retain the older DVD is its alternate French soundtrack. Criterion’s extras go heavy on input from director John Huston. Some ‘archival footage’ catches Huston (in his inimitable voice) talking about Asphalt Jungle, and he also appears on a Canadian TV interview show called City Lights. New interview featurettes give us lengthy input from cinematographer John Bailey, and from noir expert Eddie Muller, who can find nothing but superlatives for the film. In the course of examining every aspect he assures us that the John McIntire ‘police radio’ scene is definitely in the book and so wasn’t filmed as an afterthought.

The energetic commentary by Drew Casper stresses MGM politics of the time, noting that films like this one were the bane of Louis B. Mayer and heightened the rivalry between him and executive-threat Dore Schary. Some comments by James Whitmore have been interpolated into the track. Mayer reportedly despised The Asphalt Jungle and didn’t care that it was a box office success. He seemingly took his revenge by editorially mangling Huston’s next movie, The Red Badge of Courage. 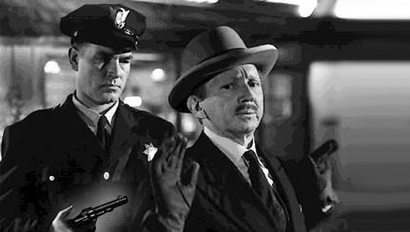 For resigned noir addicts the most exciting extra will be Pharos of Chaos, (Leuchtturm des Chaos) a 1983 German documentary by Manfred Blank and Wolf-Eckart Bühler. They find actor Sterling Hayden on his boat- barge on a European river, and just let him talk for two hours straight. I suppose it could be edited down, but Hayden fans won’t mind… he’s got a winning, aggressive personality.

I just told a close friend about this disc and discovered that he’s never seen The Asphalt Jungle. How can that be? Believe me, for anybody who has enjoyed a crime film, it’s a real gem. The only way I could improve it would be to add a couple of seconds of black after the final image, before the cast run pops up. That last shot is one that sticks in the mind.