In the beginning there was Helen Gibson. Gibson was a rodeo star in the early days of the 20th century who moved to Hollywood to become a “cowboy extra” and ended up becoming one of the very first paid stunt women/actresses in the history of the movies when she was hired to perform stunts and emote as the lead role in a picture called The Hazards of Helen (1914). She eventually opened her own production company in 1921 and continued in stunt work until the age of 69, when she performed in her last movie, The Man Who Shot Liberty Valance (1962).

There was also Polly Burson, who grew up on an Oregon  ranch in the 1920’s and, like Gibson, was a rodeo performer until 1945, where she began stunt-doubling stars like Betty Hutton (The Perils of Pauline), Lucille Ball (Fancy Pants), Julie Adams (The Creature from the Black Lagoon) and Kim Novak (Vertigo). She was also the first female to be hired as the stunt coordinator overseeing an entire film, Westward the Women (1951), and performed her last stunt work on a movie at the age of 73, for 1992’s Hero.

And in addition to stunt-doubling actresses like Vivien Leigh (Gone with the Wind), Donna Reed (It’s a Wonderful Life) and Paulette Goddard (Unconquered), Lila Finn was the founding president of the Stunt Women’s Association. She performed her last movie stunts on the set of Folks! (1992) at the age of 85. 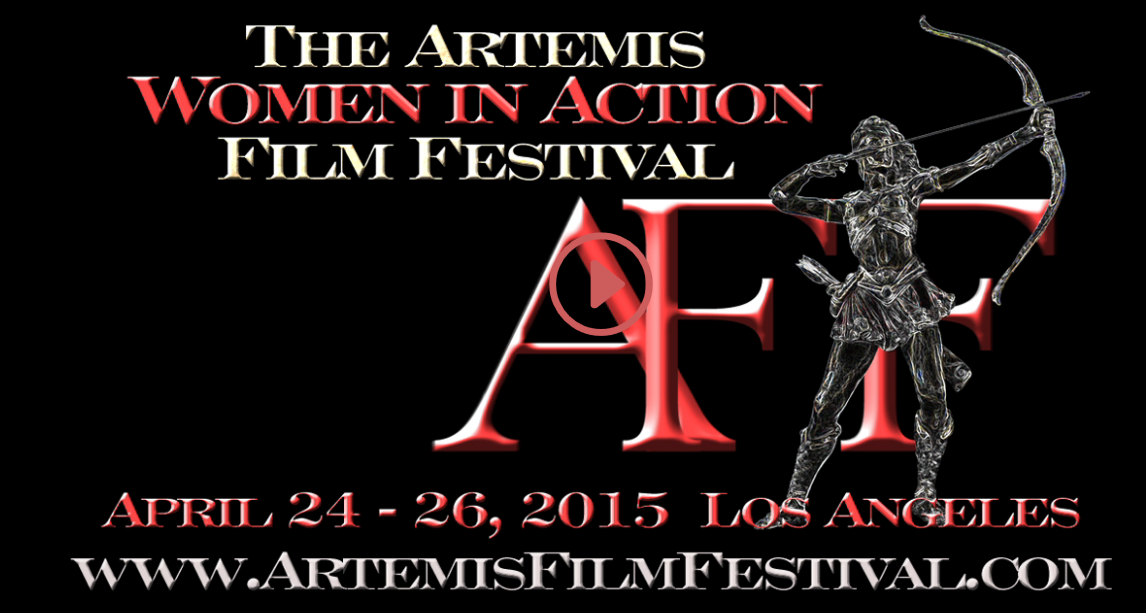 Each of these names may ring only the vaguest of bells in the memory of most film buffs, if they are remembered at all, but each was a groundbreaker in the world of women performing stunts on film. And now there’s a film festival to honor the spirit of their history and their continuing legacy as female stunt performers. It’s called  The Artemis Women In Action Film Festival, and it gets under way tomorrow night, April 24, and runs through Sunday, April 26.

The AWIAFF aims not only to shed light on the history of the pioneering female spirit of this branch of the industry, celebrating lesser-known names like Gibson, Burson and Finn, as well as other brilliant stunt women like Jeannie Epper (Wonder Woman, Kill Bill Vol. 2), Zoe Bell (Death Rpoof, Xena: Warrior Princess), Leslie Hoffman (I Wanna Hold Your Hand, 1941), Sandahl Bergman (Conan the Barbarian, Red Sonja). It is also intended to highlight and honor some of the more visible female action cinema icons like Pam Grier, Raquel Welch, Angelina Jolie and Michelle Yeoh, as well as serving as a spotlight for up-and-coming filmmakers who are looking to make their mark in the field of female-driven action cinema.

Melanie Wise, an actress, athlete, aspiring filmmaker and one of the founding members of Artemis Motion Pictures, the group behind the festival, remembers her days auditioning for countless roles in TV and movies that amounted essentially to helpless women in peril. But being six feet tall herself, often towering over the people making the casting decisions, she often found herself losing out on jobs because she was taller than her lead actors. On one audition for the Nash Bridges TV series, she found herself in an imaginative quandary which led to an epiphany of sorts. “I can’t sell this,” she said about pretending to be in quaking fear of the bad guy, and set out upon focusing on methods, including making her own films, to impress upon disbelieving producers that women in strong action roles would be something audiences would flock to see.

She says she and her partners, fellow filmmakers Sean Newcombe and Zac Baldwin, hit upon the idea of a female-oriented action film festival as a way to make just such an impression, and to give actresses who have been essential in making credible inroads into what has typically been seen a male-centric endeavor their due spotlight. “These are women who have skipped way past the confines of the roles we typically see them in,” Wise says, recognizing that for many females, actresses as well as viewers, broadening that scope can be an eye-opening experience. “Women can have a very narrow view of themselves and the possibilities they see open for themselves,” noting that when seeing women in roles traditionally assumed suitable only for men, they may see new dimensions and lifestyles they’ll find appealing. “Their whole worldview can change,” Wise notes, not without a glint of hope in her voice.

Thusly, the Artemis Women In Action Film Festival hopes to introduce to an audience already familiar with the great leading ladies of physical filmmaking to some of the long and fascinating history behind their favorite stars, but also to get that audience a peek into what might be just ahead in terms of the international talent that will be cresting the next wave of female action films. Wise and her team have fielded submissions from all over the world, including Iran, South America and the United Kingdom, including one unlikely specimen of women in action produced by Stephen Fry and Derek Jacobi (“It has their customary dry wit, but asses are also kicked,” Wise assures), and movies about skateboarders, big mountain skiers and female movie stunt pilots are among the documentary submissions already in the hands of the Artemis team. (The festival is named after Artemis, the Greek goddess of the hunt, perhaps the first true female action star.) 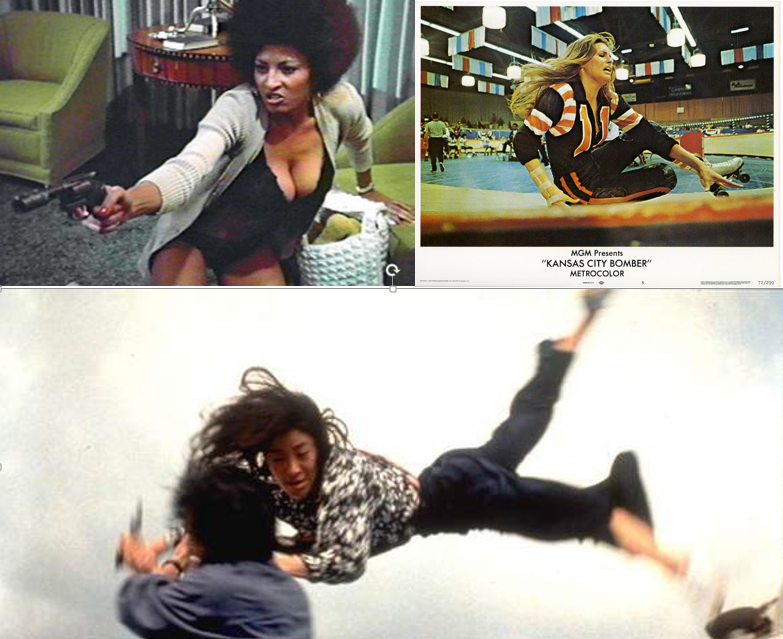 Among several others, this year’s inaugural festival will single out Angela Meryl and Maja Aro for honors. Meryl doubled Vivica A. Fox in Kill Bill Vol. 1 and in 2010 received the Taurus Award for Best Overall Stunt by a Woman for her work in the movie Obsessed, starring Beyonce Knowles and Idris Alba, and this year at Artemis she’ll be the first recipient of the Artemis Stunt Unsung Heroine Award for a body of work that demonstrates consistent and successful pursuit of excellence in her craft. Aro, a stunt woman, stunt coordinator and former Taurus award nominee, will be honored with the first Artemis Stunt Warrior Award, given in recognition of her fearless approach to a wide variety of innovative and daring stunt work.

The festival begins in earnest Friday afternoon at 12:00 at the Playhouse 7 Cinemas on Colorado Boulevard in Pasadena with a free screening of Terminator 2: Judgment Day (1991) featuring 2015 Artemis honoree Linda Hamilton, followed by screening of two shorts centered on aerial adventuresses, The Skyship Chronicles and The Aviatrix.

Tea Time is only six minutes long, but it alone is worth coming out for on Friday night. I should know, because I’m one of the festival judges and I gave it my highest rating. My cohorts in quality control include: Katrina Hill, author of Action Movie Freak and proprietor of Action Chick Flick.com; British filmmaker Helen Oakleigh; actress Rileah Vanderbilt; radio host Sheena Metal; writer Jacqui Zadik; and Pat Battistini, founder and festival director of the All Sports Los Angeles Film Festival. Together we’re hoping that festival attendees will enjoy the programming as much as we did in getting our advance looks at it.

A full schedule listing for all the programs that will be playing through Sunday evening, April 26, can be found at the Artemis Women in Action Film Festival web site, including show times and links to buy tickets.

Wise admits that it’s been a lot of work getting even such a relatively small-scale festival as this one off the ground for its inaugural year, but she believes the idea will catch fire and become an annual event. She emphasizes that this first year of the festival is specifically designed to kick off with the sort of excitement and range of viewing selections worthy of accompanying the honoring of the great and talented performers that have made an event like Artemis possible. “The whole festival will be worth it just for the opportunity to get these women and their work on a stage or on a screen and say, ‘Applaud this! They deserve it!’” says Wise, who will undoubtedly be in the front row, leading the cheers. One can imagine Gibson, Burson, Finn, Epper, and the countless other women in the movie and TV stunt field who have led relatively uncelebrated careers, cheering right alongside her. Artemis herself might even fire an arrow to the stars in approval.

(For more information, visit the Web sites linked above as well as the Web site for Artemis Motion Pictures. You can also visit the Facebook page for the Artemis Film Festival for the most current updated information.)