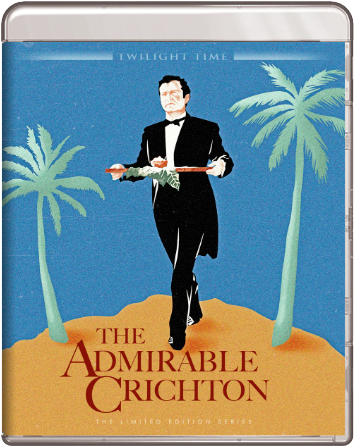 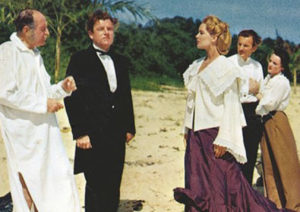 True love and the British Empire collide in 1957’s The Admirable Crichton, the riches to rags story of one hard-to-get butler and a boatload of love struck aristocrats.

Loam Manor is run with steely officiousness by the valet known simply as Crichton, a kindly martinet who views the class system as the crowning achievement of British society – a notion which not coincidentally coincides with Crichton’s dominance over the servant’s quarters. The Loams themselves, three spoon-fed sisters and their dithering father are naturally spoiled rotten, viewing their stable of servants as an exotic species to be kept on invisible leashes – in such a fraught situation the tables are just begging to be turned. And so they are when the Lord’s ship sinks, stranding the stuffed shirt and his obnoxious spawn with nothing but their character for cover. 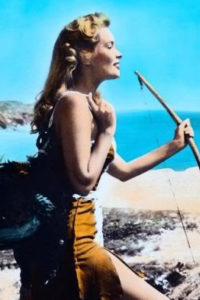 Money changes everything and so does the lack of it – Crichton, once the tuxedoed gentleman of the sitting room is now lord of the jungle, ruling the castaways with a velvet glove. Kenneth More’s implacably cool performance explains the butler’s self-satisfied aura – he, not Loam, is the real head of the house. Meanwhile the upperclass have found their own secret identities as dishwashers and hand maidens, ready and waiting for Crichton’s next command. All except the eldest daughter Mary played by Sally Anne Howes. Once the most arrogant of the self-absorbed brood, the statuesque blond rocks a fetching two piece while channeling Sheena of the Jungle – surprising both herself and her newly smitten suitor Crichton.

Screenwriter Vernon Harris adapted the 1902 play by James Barrie, best known for 1904’s Peter Pan. The playwright knew something about Never Never Lands (Crichton’s American release was titled Paradise Lagoon) and the same melancholy undercurrent that dogs the story of Pan and Wendy haunts Crichton and Mary when it comes time to leave the island. 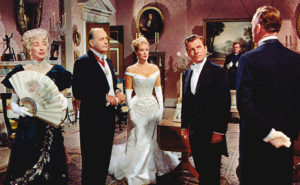 The return to civilization doesn’t erase memories of their princedom by the sea – just the thought of the Loams’ temporary serfdom is simply too humiliating to endure and so a few changes in staff are in order. Those changes lead to an ambiguously happy ending as the cameras dwell not on the contented couple escaping Loam Manor but a solitary woman waving goodbye, undoubtedly dreaming, like Wendy, of a return to the island.

One of the great shape-shifters of Her Majesty’s film industry (with credits ranging from Alfie to Moonraker), Lewis Gilbert’s buttoned down direction puts Crichton in the same league with such bittersweet entertainments as Roman Holiday and Local Hero. The memorable cast includes Diane Cilento as Tweeny, Cecil Parker as Lord Loam and the irreplaceable Martita Hunt as the crusty busybody Lady Brocklehurst.

Twilight Time’s beautiful new Blu ray is a tribute to the great Wilkie Cooper whose sumptuous Technicolor photography continues his tradition of great waterlogged adventures including Jason and the Argonauts, 7th Voyage of Sinbad and most appropriately, Mysterious Island.