Ray Harryhausen eases up for his second color Dynamation feature, restricting the stop-motion and instead utilizing traveling mattes to make a more juvenile adventure movie for smaller kiddies. The big draw is the beautiful music score by fantasy favorite Bernard Herrmann. 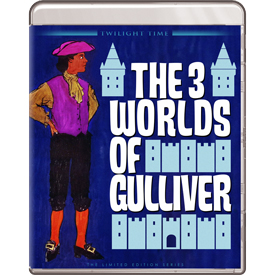 In The 3 Worlds of Gulliver Ray Harryhausen, Charles H. Schneer and Dynamation go tame — unlike their earlier Sci-Fi movies (and one violent fantasy hit) it’s much more of a kiddie film. Nobody expects a serious version of Jonathan Swift’s book, but this semi-satirical jumble gives us a human version of the sweet-hearted Max Fleischer Gulliver in an adventure that mostly allows a genial cast of English actors to wax enthusiastic with their line deliveries. At the age of eight 3 Worlds was Savant’s first introduction to the wonders of stop- motion animation effects. I couldn’t believe my eyes when I saw the animated crocodile… as far as I was concerned, it was alive and real. 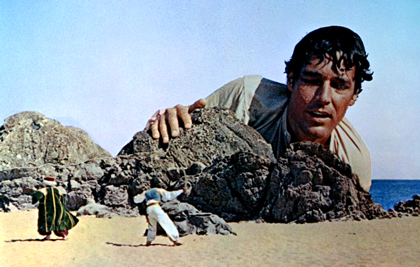 But this Gulliver shapes up as a lightweight children’s adventure with some spectacular visuals. Harryhausen and Schneer didn’t develop the story but simply plugged a couple of stop-motion scenes (and a couple of awful songs) into an existing screenplay. The most enjoyable aspect of the show is Bernard Herrmann’s great music score. For collectors it’s the main attraction — and Twilight Time includes its regulation Isolated Score Track feature. Do you still have a Columbia TriStar 2001 non-enhanced flat DVD of this show? Well, don’t brag about it.

The screenplay is Swift Lite, put in a blender. Doctor Lemuel Gulliver (Kerwin Mathews) decides to leave home to find his fortune, and his fianceé Elizabeth (June Thorburn) stows away against his wishes. But he’s washed overboard and onto the shores of Lilliput, where all the people are four inches tall.  Lilliput is a petty principality ruled by irrational prejudices and ridiculous credos. Its court politics are a constant round of scheming and backstabbing for position. Gulliver is hard put to please anyone, even though he preps a new farmland and destroys the fleet of the enemy Blufescu. Unappreciated, he leaves in a handmade boat only to wash ashore in the equally backward land of Brobdingnag, amid a population of giants. There he finds Elizabeth and after being married by the King lives with her in a child’s dollhouse. But the court sorcerer schemes to have Gulliver branded a witch. He’s made to duel with a pet crocodile, until the sympathetic young Glumdalclitch (Sherry Alberoni) comes to the aid of her two doll-friends. 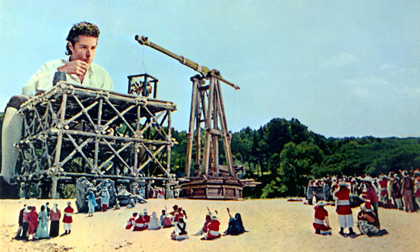 Ray Harryhausen is the greatest one-man act in the history of special effects, always accomplishing more with less using his personally invented Dynamation system. The 3 Worlds of Gulliver is his second color feature. While not exactly trashing the Jonathan Swift classic, no attempt is made to even approach the satirical edge of that great writer. A good and fair man, Lemuel tries to understand the intolerant politics of petty tyrants that fight over issues as ridiculous as what end of an egg everyone should crack open. Rulers are thoughtless dolts overly concerned with their status, and their advisors are constantly suggesting that ‘the giant’ or the ‘doll-man’ be killed for one reason or another. Gulliver tries to ingratiate himself with the Lilliputians but it’s just impossible. He averts war by confiscating an enemy fleet, but the King then demands that he slaughter the entire opposing kingdom. In Brobdingnag, Gulliver’s rationality and scientific knowledge only cause him to be accused of sorcery. He humbles the King by winning a chess match against him, also a bad move. The complex satire in Swift’s tale, meant of course to criticize his own government, had a much more vitriolic edge – this is the wit who proposed with a straight face that Ireland serve up its poor children as a food resource, to simultaneously solve the hunger and overpopulation problems. 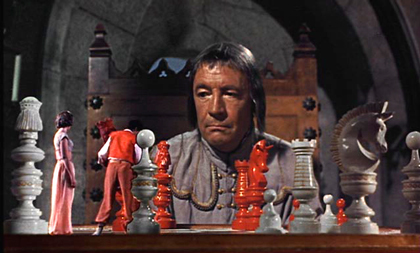 Schneer and Harryhausen’s The 3 Worlds of Gulliver is not about much more than a guy’s problems with disproportion — in other lands he stands out and doesn’t belong, and the only lesson offered is that living a simple life back in Merrie England isn’t so bad an idea after all. Speaking of back home in England, is it the ‘3rd World’ of the title?  Maybe they dropped one for budgetary reasons?  [No: don’t forget Blufescu, where Lemuel steals the warships.]  I imagine that kid fans older than me felt cheated when Gulliver and Elizabeth didn’t wind up on at least one more mysterious island, preferably one overrun with giant monsters.

Bernard Herrmann’s charming score holds the picture together. His music provides a period sense and establishes moods of fun and menace. Jack Sher’s direction is almost non-existent, thanks to the need for so many static matte shots dictated by the special effects. Gulliver’s Travels is a story that requires constant special effects outside the means of a low-budget movie. Although the sodium vapor travelling matte process allows opticals with excellent color and little image degradation, the simple perspective and matting tricks are just adequate. Almost every angle is mandated by what the limited effects allow. Although decent miniature and oversized props are used there’s always the feeling that Kerwin Mathews was hired because he does such a good job hitting precise marks and directing his attention to the correct part of the screen. Also lacking is a superior sense of design — Compared to the (admittedly far more expensive) Darby O’Gill and the Little People, the effects now seem primitive, especially without an engaging story to carry them. Ray Harryhausen was not yet a ‘name’ in 1960, but we now expected more ‘magic’ in a Harryhausen picture. 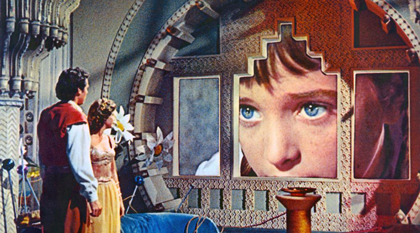 Harryhausen often remarked on the necessity of finding fresh locations for his effects extravaganzas, but most of what we see in The 3 Worlds of Gulliver is recycled directly from The Seventh Voyage of Sinbad. Gulliver’s home in England is on the same hill where the first Cyclops smashed sailors with a tree trunk. Likewise, the angles on the beach and among the seaside rocks just look too familiar. When Gulliver is washed ashore on Brobdingnag, it’s still the same damn beach. Charles Schneer produced a technical miracle of a movie on a minimal budget, but it’s just not enough. Gulliver has some bright faces and amusing performances, but it needs more visual variety and a better script. 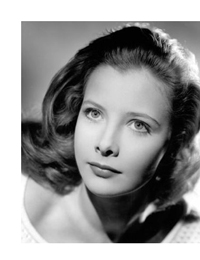 Kerwin Mathews is fine as Lemuel Gulliver, a gentler adventurer than his Sinbad. He is indeed an ace at ‘selling’ the effects scenes. The encounter with the Rhedosaurus- like crocodile is a Dynamation highlight because Harryhausen varies the framing on his compositions, and cuts at interesting points in the battle. Mathews’ mime and swordwork is as believable as ever.

The rest of the cast plays mostly as an ensemble. Sweet-faced June Thorburn was surely cast from her previous appearance in George Pal’s Tom Thumb. She doesn’t have much opportunity to show the spirit that Kathryn Grant did, but her Elizabeth does get a Honeymoon scene of sorts. Sadly, Ms. Thorburn came to a tragic end seven years later.

Columbia ingénue Jo Morrow (Our Man in Havana) is wasted in a couple of walk-ons as the Lilliputian love interest. Of the various pompous foreigners, Peter Bull (Dr. Strangelove’s Russian Ambassador) is a standout. But the names include some pretty busy, accomplished actors: Lee Patterson, Grégoire Aslan, Basil Sydney, Charles Lloyd Pack, Martin Benson, Mary Ellis and Marian Spencer. Little Sherry Alberoni is satisfactory but her eye-lines never seem to match up properly when she smiles down at her ‘doll people’. The mischievous dark-haired girl antagonist ‘Shryke’ (Waveney Lee) is totally undeveloped, and uncredited to boot.

Gulliver’s Travels has always been a problem story, as its giants ‘n’ midgets angle only goes so far. It defeated Max Fleischer, whose 1939 animated operetta version is still more entertaining than this attempt. Jack Sher and Arthur Ross’s script just hasn’t got forward momentum. At one point Gulliver is grabbed by a giant squirrel and tucked away for Winter along with the rest of the nuts. True, that’s not something you see every day, but it simply doesn’t advance the story. 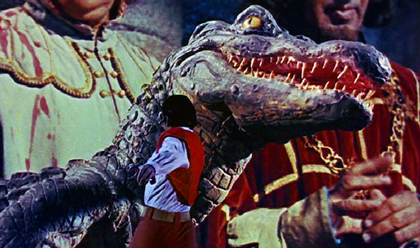 The Twilight Time Blu-ray of The 3 Worlds of Gulliver rescues this gentle kid’s film from the eyesores of terrible TV prints and a bad DVD. It’s presented in two formats — 1:66 and 1:78, which ought to make everyone happy. The color throughout is excellent, a real showcase for the improved traveling matte process. Sure, the matte lines are easy to spot, but at least the color and focus don’t go blooey.

The attraction takes five clicks upward with Bernard Herrman’s music — it’s a pleasure to listen to. The individual cues are expertly spotted, pushing the film forward and giving the excitement a boost just when it’s needed. And as I said above, it can be audited by itself, turning the show into a Bernard Herrmann concert.

TT carries across the SD extras from the Sony library, with a trailer as well. The Making of The 3 Worlds of Gulliver is a video featurette from 2001 featuring Harryhausen. The Harryhausen Chronicles is the hour-long Richard Schickle TV docu, and is still good — although we’d like to see the video replaced with new transfers. This Is Dynamation!  is the same well-worn Columbia promo back in 1958  touting the non-existent but very real-sounding film format.

The big draw is a new audio commentary. Screenwriter and Harryhausen fan C. Courtney Joyner steers much of the discussion while serving as host, while author Steven C. Smith provides in-depth analysis of the Bernard Herrmann music. Adding professional authority and many thoughtful observations is Randall William Cook, well known as a prime Harryhausen acolyte, accomplished stop-motion animator and effects supervisor / second unit director. Although the film has little stop-motion, Cook has plenty of interest to say about all aspects of the picture, including some of the great English talent in the cast, and the working relationship of Harryhausen and Schneer.