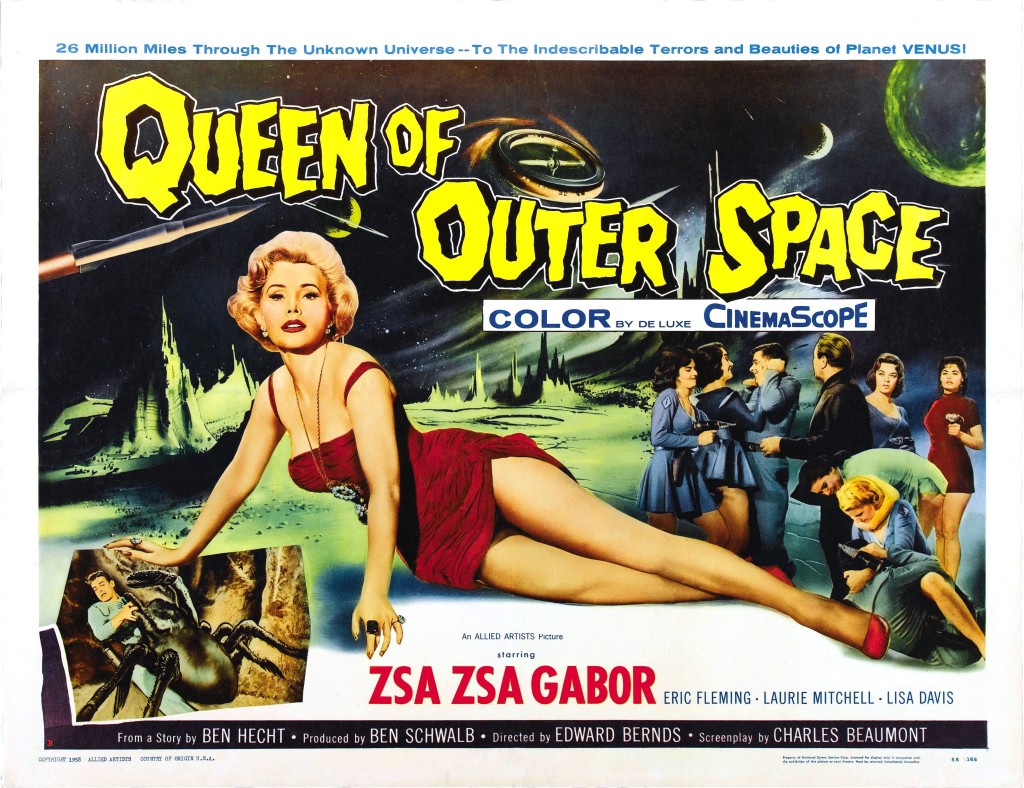 During a routine assignment in outer space, stalwart space jockey Neil Patterson (Eric Fleming) and his trusty crew crash land on the planet Venus where they’re waylaid by a mob of petulant space-babes decked out in mini-skirts and ray-guns.

These comely Venusians are already enslaved by their own dictator, the deranged, man-hating Queen Illyana and soon Fleming and company are storming the temple to free its voluptuous citizenry with the help of the planet’s preeminent scientist played by Zsa Zsa Gabor. That’s right. Zsa Zsa Gabor.

That antediluvian mindset extends not only to Gabor’s dumb-blonde dramaturgy but the simple-minded astronaut’s knuckle-headed attempts at comedy… all of which should come as no surprise since Queen of Outer Space is the work of the Three Stooges’ favorite director, Edward Bernds.

Queen began  in 1952 as a mere glimmer in screenwriter Ben Hecht’s eye, a bare-boned outline about a planet ruled by women called Queen of the Universe. Rejected by the studio, Hecht’s satirical notion was revived in 1958 at Allied Artists with Charles Beaumont assigned to write the script. Beaumont retained the satire but apparently neglected to inform the director and actors of the humorous nature of the enterprise. 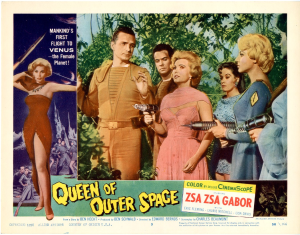 The film is a typical Allied Artists hodgepodge, re-using props and costumes from films as disparate as Flight to Mars, World Without End and Forbidden Planet, though the Cinemascope framing and bright pop art colors of cinematographer William Whitley (The Adventures of Superman) give it a grandly kitschy appearance.

As absurdly fun as Queen is, it’s a shame it didn’t come to fruition with the great Hecht involved. One can only imagine what his occasional collaborator Billy Wilder might have done with Dean Martin, Jack Lemmon and Tony Curtis as the libidinous space cadets and Marilyn Monroe as the smoldering scientist toying with her test tubes in place of the monotonous Zsa Zsa.

Queen of Outer Space is available from Warner Archives with a colorful, out of this world dvd transfer.