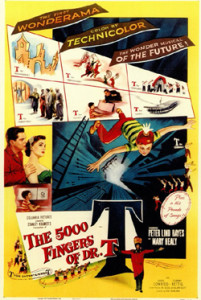 In Mad Magazine’s 1954 send-up of Alice In Wonderland, Alice finds herself once again surrounded by the nightmare inhabitants of Lewis Carroll’s looking glass world and finally snaps, unleashing a terrified wail, “It may be quaint by you!… It may be delightful by you!… It may be Wonderland by you! By me it’s only one thing! Scary! ”

Produced in 1953 by Stanley Kramer and directed by Roy Rowland (although apparently Kramer himself stepped in at several points), The 5,000 Fingers of Dr. T. is based on the only original screenplay written by Dr. Seuss, who, like Carroll, specialized in whimsical dreamscapes inhabited by strange creatures with ambiguous, possibly sinister motives… what Marianne Moore might have characterized as “imaginary gardens with real toads.”

Like Invaders From Mars (another nightmarish childhood scenario from the same year), Dr. T. features a misunderstood and (presumedly) lonely child suddenly dropkicked into a Technicolor netherworld patrolled by cruel, fascistic adults and their freakish underlings. 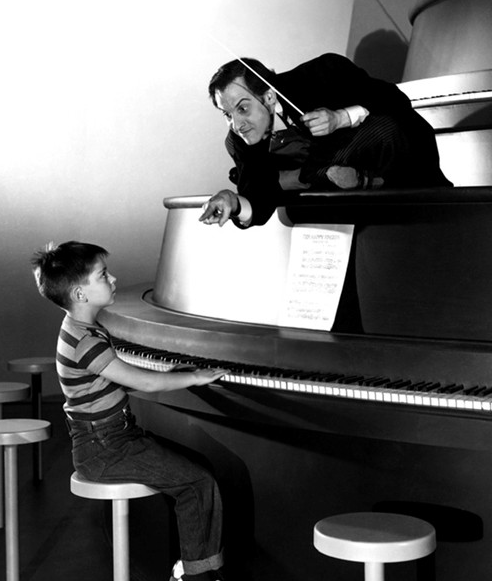 That lonely child is Bart (Tommy Rettig) who falls asleep in the middle of a piano lesson prescribed by his tyrannical teacher, Dr. Terwiliker (played by the alarmingly grandiose Hans Conried). He wakes up in an enormous, otherworldly fortress populated by 499 other piano-playing boys with Dr. Terwiliker, now transformed into the diabolical Dr. T., presiding over the children as their chief tormentor.

Featuring frighteningly precarious stairways that lead to nowhere and roller skating twins co-joined by their shared beard, The 5,000 Fingers of Dr. T. is a faithful visualization of Seuss’ loop-de-loop universe. But that faithful recreation only betrays the pitfalls of translating a loose and lively drawing into an earthbound artifact on a Hollywood soundstage.

Dr. T. is surely one of Hollywood’s most peculiar creations and it deserves to seen. But Kramer’s literal rendition of Seuss’ flight of fantasy gives the imagination too little room to roam… in The 5,000 Fingers of Dr. T. both the garden and the toad are all too real.