The catalyst behind Ulli Lommel’s perverse horror masterpiece might be writer-actor-art director Kurt Raab. He’s almost too convincing as Fritz Haarmann, an infamous real-life serial killer of young men who masks his abominable activities behind a snitch relationship with the police. He’s an obscene cross between Peter Lorre’s child-murderer and the ghoul Nosferatu. 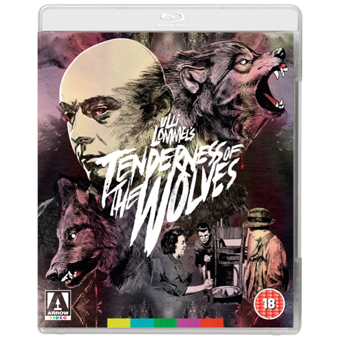 Movie horrors can’t compete with real life any more, in an overcrowded, often hostile world that seems to encourage terrible crimes. It’s clearly the thing to do, as our ‘news’ programs spend most of their time chasing down every hostage situation and random shooting. Earlier in the 20th century serial killers were a subject not to be mentioned by decent people, as if knowledge bred repetition. There was Lizzie Borden and Dr. Crippen, neither of whom was from the poorer classes. But in the 1920s Hanover Germany had a real-life ghoul whose horrors grouped together several social taboos. Alfred Hitchcockof course broke the lock on the subject with his high-profile Psycho, but it stayed at an arm’s length from the grisly business of its subject Ed Gein. Who would want to make such a disgusting movie? Well, ten years later European exploitation producers would be filming just about everything. 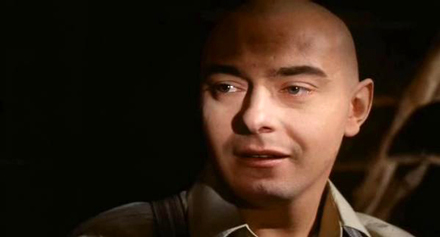 In West Germany, filmmaker Rainer Werner Fassbinder was doing well enough to produce as well as direct, and he gave his associate Ulli Lommel the opportunity to make Tenderness of the Wolves (Die Zärtlichkeit der Wölfe) in conjunction with another creative friend, Kurt Raab. It’s a very different movie, in keeping with Fassbinder’s New German ethos — a horror film too dry to be simple exploitation. Art horror wasn’t normally like this in the 1970s — it’s a quality production, but with very raw content.

The story doesn’t exactly follow the facts around mass killer Fritz Haarmann, but they’re very close. The bald, sneaky Haarmann (Kurt Raab) is despised by the fellow tenants in his slum apartment — neighbor Frau Lindner (Margit Carstensen of The Bitter Tears of Petra von Kant even accosts him about the strange noises coming from his room, the suspected stolen goods he seems to traffic in, and the unsavory people he associates with, especially his close male associate, Hans Grans (Jeff Roden). Almost unnaturally calm, Haarmann circulates with prostitutes and pimps like the fat Wittowski (Rainer Werner Fassbinder), who take his homosexuality in stride. Hans appears to be an ex-roommate, and Haarmann is constantly trying to get him back again. What isn’t well known is that Haarmann picks up boys and young men, and after feeding them in his rooms, murders them almost as would a vampire, by biting their necks. Haarmann would have been picked up a long time ago if it weren’t for the fact that he has police protection. He quietly informs on his friends, using the information from the police to steal from other thieves and also to find likely victims. Nobody guesses what a monster Haarmann is — he may be eating parts of his victims, and selling some of the meat. 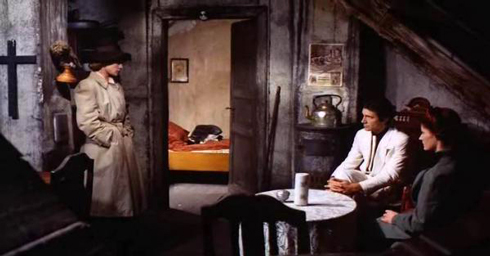 Tenderness of the Wolves is a unique item — an only marginal commercial film made way before serial killer movies embraced grotesque morbidity as entertainment. Its genuinely dreadful character study is built around Kurt Raab, who plays the lead role, wrote the script and designed the movie as well. Besides entertaining Raab’s personal obsessions — he seems personally invested in the project in a big way — the movie is a subtle revival of German expressionism, or at least a look back at some earlier classics. WIth his bulbous domed head, Haarmann looks like Superman’s nemesis Lex Luthor, or perhaps Dr. Thorkel in Doctor Cyclops. When he bites his victims the visuals are a close match for Murnau’s Nosferatu. The fact that he’s a real historical character makes him many times more unpleasant. For all practical purposes Haarmann is a vampire — he’s said to have killed 24 young men and children, maybe 27. Raab’s killer is also very much like Peter Lorre’s child killer Hans Beckert in Fritz Lang’s “M”. Director Lommel even copies some of Lang’s camera angles for one scene of Haarmann picking up an unsuspecting child. The movie does not try to copy silent-film expressionist techniques, but instead sticks to limited views of dank but realistic rooms. Haarmann walks lonely streets, but also finds his prey walking through fields and vacant lots of what looks like an economically depressed area.

Making the picture more disturbing, or perhaps just more realistic, is its unblinking attitude toward the killings. The blood isn’t exaggerated but the seductions are. The homosexual Haarmann picks up mostly street kids or transients, or possibly gay teens out on their own because they aren’t welcome at home. Haarmann finds one long-haired kid is found swimming naked in a pond. It would seem to be a basic gay pickup situation. The film has several scenes of full frontal male nudity. That’s a taboo in almost all movies but especially in conventional horror fare, that traditionally exploits straight male desires — hence the emphasis in Hammer films on sexualized female victims. I can imagine gay audiences being taken totally by surprise, as Tenderness of the Wolves doesn’t conform to the standard rules of horror fare. 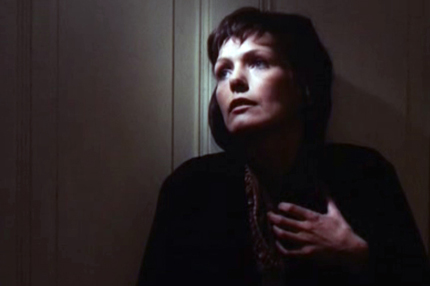 The historical basis for the movie is an exceptional case, of course, but Tenderness of the Wolves fits too conveniently into bourgeois nightmares about homosexuals — this guy is a rapacious child molester and sex offender, a murderer who kills through morbid mutilation, and a cannibal to boot. After an example like Haarmann, all the public needs is a touch of religious anxiety to condemn all gays as agents of the devil.

Lommel’s movie doesn’t bother to condemn Haarmann, or defend him. He’s not afforded much in the way of sympathy, and has no “Ich muss!” speeches of the sort that elevated Peter Lorre’s acting reputation. “M” was based on a criminal called ‘The Vampire of Dusseldorf,’ while the real Haarmann was called ‘The Butcher of Hanover.’ Both were seriously disturbed sociopaths who found it easy to operate during Germany’s severe economic depression of the 1920s. We’re told that the few police on the payroll were so overwhelmed by the black marketeering that they relied on paid informers, and even unofficially deputized selected criminals to help catch offenders. Haarmann takes full advantage of this situation, feeding smugglers to the cops while doing the same crimes on the side with impunity. He even passes himself off as a policeman, to scare off crooks and take their stolen goods. Frau Lindner sees him doing obvious criminal acts, and even follows Haarmann when he dumps some suspcious bundles in the river. But Haarmann’s cop associates are so satisfied with his work that they talk themselves out of suspecting him of anything. In one chilling scene, they make a pretense of searching his apartment, and narrowly miss seeing a mess of half-chewed bones on the floor. Haarmann apparently initiated his lethal attacks by biting the Adam’s apple, so the victims couldn’t scream. Sheesh. 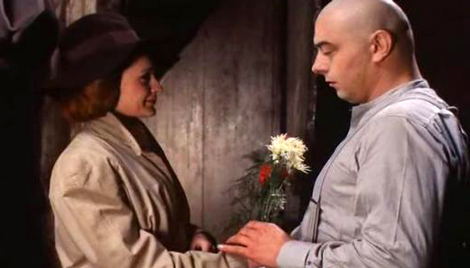 The story is not set in the 1920s but is perhaps meant to take place in the depressed years after the next, the one that the filmmakers experienced as children. Although deliberately paced, its cast is fairly interesting, especially some women who hang around the crooks, and are intrigued by Haarmann’s icy attitude. He’s a pasty-faced slug, yet one of the women finds him attractive. Haarmann takes it all in stride, seemingly confident that he’s too smart to ever be caught.

In 1973, before the ‘anything goes’ precedent of The Exorcist, Lommel and Raab’s movie was indeed a shocking, ice cold slice of morbid pie, with a chaser of sick sex. It was notorious enough to go beyond the film festival circuit in Europe and became an immediate cult item over here. It certainly jump-started Ulli Lommel’s directing career. It is what it is, a serious and rather beautifully made horror art film, and definitely out of the mainstream. 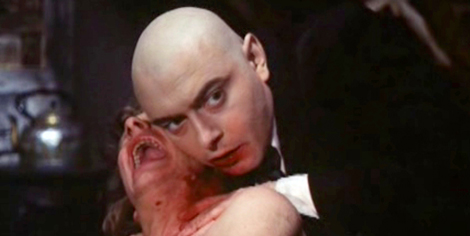 Arrow Video’s Region B Blu-ray + PAL DVD of Tenderness of the Wolves is a meticulously restored HD transfer of this chilling, gruesome and purposely repellent horror item from Germany. The images are excellent, with vivid colors and fine detail. Technically the picture is also polished for audio. Before Arrow’s disc I’d seen only pieces of the picture on a greyed-out VHS, and this is something completely different.

Ulli Lommel gives us a full commentary and also sits for a video interview, to tell the story of how he got the directing assignment and how well the shooting went. He says that Fassbinder was never happy with it, and thought it a mess. According to Lommel, the more famous director disassociated himself from it, until it began doing better than his own pictures. Lommel takes a lot of time to praise Kurt Raab, who was gay and became a victim of the first wave of AIDS deaths in the 1980s. Lommel also gives a very brief intro to the film.

Cameraman Jürgen Jürges (Faraway, So Close!) is given his own interview to discuss the film’s visuals, as is actor Rainer Will, who plays one of Haarmann’s victims. Genre writer Stephen Thrower contributes a video piece on the film as a whole. A photo gallery and a trailer finish off the video extras. The illustrated insert booklet has an essay by Fassbinder expert Tony Rayns, and a reversible cover gives the buyer a choice of disc artwork.