Troubling fact: the great director Otto Preminger’s worst film is not Skidoo. Three physical misfits form an alternative family as a defense against the world. It’s a good idea for a movie, but the writer and director do just about everything wrong that a writer and director can do. 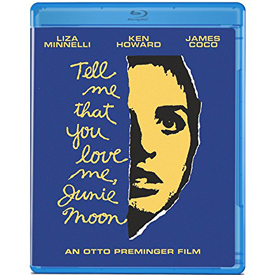 1968’s Skidoo announced that the once- brilliant filmmaker Otto Preminger had lost his cinematic marbles, and his next movie confirmed it. After his own many public battles with the Production Code, the freedom of the new ratings system seemingly called out to Preminger to explore previously taboo material. Taken from a book by Marjorie Kellogg, the premise of Tell Me That You Love Me, Junie Moon offers new ways for Preminger to prove himself a groovy guy who has changed with the times. Instead, Otto watched as his brother Ingo’s production M*A*S*H cleaned up at Cannes and at the box office. The desultory Junie Moon was a no-show, a flop, a movie that people didn’t even want to talk about. His star Liza Minnelli was fresh from a surprise hit, The Sterile Cuckoo. She would continue immediately to the smash success of her career, Cabaret, and never look back.

Sounds pretty good, huh? In Junie Moon’s defense, its heart is certainly in the right place. I’d say that the subject matter is about ten years ahead of its time. And everyone involved is earnest. But there is also no lack of things to criticize. 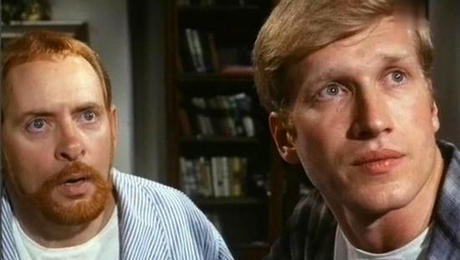 Recovering patients Junie, Arthur and Warren (Liza Minnelli, Ken Howard & Robert Moore) befriend one another and decide that upon release they will form an ad-hoc family unit and try to make a life together. Left behind at the hospital is Minnie (Clarice Taylor), who is not expected to live. A gay paraplegic, Warren is a take-charge guy who gets hospital social worker Miss Farber (Anne Revere) to help them with the welfare bureaucracy. Arthur has been stricken by an undiagnosed, epilepsy-like syndrome since youth, and is fearful that he’ll never have a normal life or be accepted as a man. Junie is horribly scarred on her face and arm, from an acid attack by a psychotic who took her out on a creepy date (Ben Piazza). She’ll be happy to stay with her friends away from the prying eyes of the world. The three misfits succeed in renting a house from an eccentric millionaire (Kay Thompson). Arthur stops taking his medications, as he’s decided that they don’t really help him. A vicious phone call causes Arthur to lose his new job with fish seller Mario (James Coco), before he even starts. Mario atones by lending the trio his car for a vacation trip. Warren checks the trio in in pretending that Junie is a famous woman in hiding, and has the time of his life with ‘Beach Boy,’ a handsome hotel employee (Fred Williamson). Arthur gets his chance to declare his love to Junie. But he hides the fact that his seizures have returned.

Tell Me That You Love Me, Junie Moon sounds like a great opportunity for Otto Preminger: three ‘incomplete’ and frustrated social outsiders come together to heal their wounds and find a way to deal with the rough world out there. Preminger wanted Bob Dylan to supply a theme song, but found a good replacement in Pete Seeger. The famed folk singer appears in bookend scenes strolling through a Sequoia forest singing “Old Devil Time.”  It’s the best thing in the movie, a worthy call for ‘lovers to gather ’round’ to help each other survive. 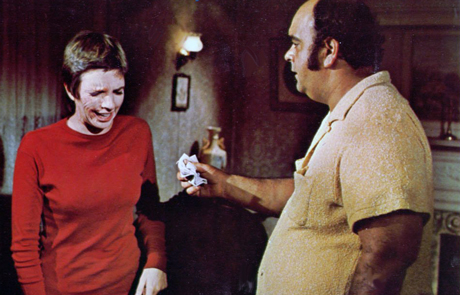 If only the rest of the movie had a clue what it was doing. Preminger is too busy embracing alternate lifestyles to realize that his movie is flying away in all directions. The basic trio is okay, but the sub-par dialogue fails to do more than move the story along and put exclamation points on every scene. Far too many scenes just plain fail. Each character is given an extended flashback. Liza’s Junie is subjected to a pointlessly graphic horror scene in which a repressed sex maniac douses her in battery acid. Unpleasant as hell, it explains nothing: the villain (Ben Piazza of The Hanging Tree) is not heard from again. Technically speaking, the acid attacker is a misfit even more in need of help than our trio.

Warren’s background is covered in a flashback that sees him abandoned by his mother and raised by a gay artist (Leonard Frey). The section is played for laughs at the antics of swishy gays. Preminger seemingly balances that with female nude scenes courtesy of curvaceous Anjelique Pettyjohn. The movie is Ken Howard’s film debut. His Arthur is victimized by cruel schoolboys. Poorly stylized scenes use squeezed images and makeup to give his tormenters B&W faces. Julie Bovasso (Moonstruck) is a school cook who play-threatens the younger Arthur with castration. Arthur is given ill-fitting clothing and walks about with a gangly gait meant to suggest his emotional arrest in childhood; he comes off looking like a sweaty Frankenstein monster.

Most of the scenes with Liza Minnelli are handled very well, and her special makeup is superb. The scarring is realistically detailed, discoloring the flesh, making her lip curl and erasing an eyebrow. It’s not Phantom of the Opera- extreme, but just severe enough to frighten children and repel adults. Minnelli is to be praised for this risky choice to de-glamorize herself, almost to the degree of Peter Lorre back in The Face Behind the Mask. Back in the ‘liberated’ year 1970, wounded soldiers and kids with any kind of unsightly deformity were still being hidden away; I think Junie Moon does well whenever Liza is on screen. We’re told that her mother Judy Garland died during rehearsals for Junie Moon, and her performance may reflect her emotional condition to some degree. 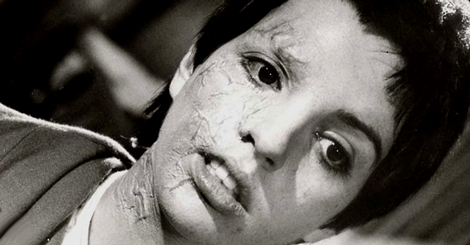 Less successful is the film’s ‘with it’ embrace of Preminger’s idea of the gay scene, which is one big party. Because he’s unable to walk, Warren is carted around by Fred Williamson’s genial ‘Beach Boy,’ a hotel employee. The character isn’t entirely explained. Beach Boy appears to be dedicated to Warren’s personal enjoyment of the weekend just because he likes him. But he also appears to be straight (at least for this weekend). Warren rejects the advances of a bisexual ‘social contact’ who guarantees him a good time, only to find himself double dating on a beach make-out session, fixed up with a woman (Emily Yancy). The only movie cliché less respected than ‘the heroine’s loyal gay friend,’ is the defusing of uncomfortable homosexual subject matter by having a gay guy discover he can make it with a woman. The next day, Warren is confiding to Arthur about his ‘strange adventure.’

Absolutely not working is a subplot in which the trio’s rich landlord Miss Gregory (Kay Thompson of Funny Face) drops by in her leopard-patterned Rolls Royce with an invitation to dinner at her castle, which was imported stone by stone from Europe. Miss Gregory’s rude reactions to the group’s infirmities go beyond honest bluntness. The visit is cut short after she tries to entice Warren to walk by promising him a monetary reward. It’s awful. The Miss Gregory character is presented with so little finesse, she could be the best friend of Disney’s Cruella de Vil.

Conversely, the charming James Coco is believably friendly and helpful, a real asset. But the idea of his paying for a big vacation for three near-strangers is too much of a stretch. There’s big money in small-town fish stands, you know. The lonely fish man is as deserving as any of the trio; I guess his reward is that he’ll be accepted into their group — and probably have to support them. The final sentimental failure comes when Julie brings the terminal patient Minnie home for an afternoon, to make her happy. Minnie gets a few minutes to hobnob with Warren in the garden, but it doesn’t add up to much. Junie Moon has good ideas to express, but it repeatedly stumbles. 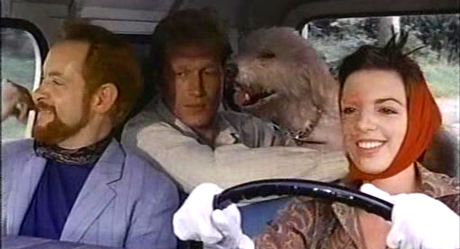 The film’s ideas of anti-establishment freedom and screwball liberation are not well thought out. Having problems doesn’t give one the right to cheat other people. The welfare system is seen as something to be gamed. Warren and Junie give the hospital staff a hard time, with Nancy Marchand wasted in a thankless role as a stuffy nurse. But Anne Revere gets a free pass because she helps with the welfare subterfuge. Warren and Co.’s unfunny defrauding of the seaside hotel makes them look like freeloading jerks. Having Beach Boy help them cheat isn’t pleasant either, even with his lame ‘with it’ final line of dialogue: “We blacks have to stick together.”

The final flub casts doubt that the ‘sensitive’ film has a grasp on any real human problem. Junie and Warren express their approval when Arthur announces that he’s discontinuing the prescriptions that keep his brain from misfiring, and prevent his serious seizures. The guy is in need of love and acceptance, but we in the audience are thinking that it’s far more important to get Arthur’s malady properly diagnosed. The misfits of Junie Moon encourage each other to spread their wings and fly, but nobody’s really acting responsibly.

What’s the verdict?  Savant clearly likes train-wreck movies. They can be just as much fun to second-guess as outright successes — where did they go wrong? Could I have done better? (Answer: no.) Fans of Liza Minnelli won’t need urging to check this out. She does nice things with the role, overcoming some of the lame dialogue and ill-conceived scenes. The film didn’t inflict permanent damage on anybody’s career. Robert Moore was already established as a stage director, and he soon moved into high-profile TV and feature direction work. 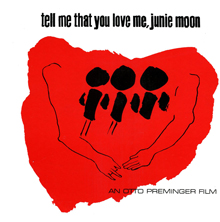 Olive Films’ Blu-ray of Tell Me That You Love Me, Junie Moon is a good HD encoding of a movie that even Otto Preminger’s most loyal defenders label a dog. It’s not that bad, really. Colors are fine, and Boris Kaufman’s cinematography okay. Using fewer tracking shots and more zooms, Preminger appears thoroughly unhinged as to what style to use. Composer Philip Springer finds several pleasing melodies, and his string section goes haywire whenever Arthur has one of his ‘attacks.’

We’re grateful for the English subtitles, even though they carry a great many errors, confusing words and misreading others in ways that seem wholly unlikely. Did a computer program do the basic transcription? The subs can be really distracting.

Saul Bass reportedly designed but did not take credit for the film’s signature title logo, as seen on the soundtrack album cover, right. It’s the only thing I’ve seen Bass design that doesn’t really work. What do the arms mean? What do the missing fingers mean? Is the red patch a smushy heart, or a smear of blood? Is it a title logo, or a perverse visual film review?

One last observation — Junie Moon has the first reference I remember to handicapped access issues. Warren likes the house Junie has rented, and appreciates that she has already built a ramp for his wheelchair. But he throws a fit when he sees that the house has a typically narrow bathroom door. Arthur sets about widening it, right away.