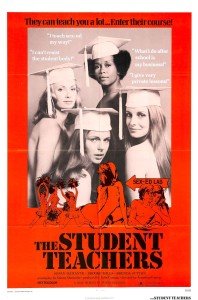 Although The Student Teachers follows the New World “student nurse” formula almost slavishly (pretty girls, lotsa nudity, low‑comedy plotting, violent black subplot dragged in by the heels), it stacks up as a nifty little programmer by virtue of fast pacing and an engagingly breezy comic style. Where aggressively promoted, it holds strong lures for the general youth trade and should prove an especially appealing drive‑in item.

The makers of last year’s Night Call Nurses have simply lifted the gags and situations from that film and transplanted them to a high school setting, resulting in a beefed‑up B‑movie equivalent of TV’s ROOM 222 but done the way today’s teenage viewers would really like to see it. Education takes a back seat to gratification, the authority figures are all nincompoops or worse, and there’s a mad rapist on the loose in the locker rooms. The tone is cheerfully hokey, there’s plenty of wish‑fulfilling sex fantasy for adolescent‑minded audiences to relate to, and Jonathan Kaplan’s direction is energetic and streamlined.

The acting is variable, but Dick Miller, beloved veteran of numerous Roger Corman opuses, is hilarious as the penultimate dumb phys‑ed instructor. The fact that in the end he turns out to be the rapist will be a source of glee to anyone who ever blew their lunch after running the mile in gym class. Danny Opatoshu’s looseknit script has apprentice teachers Susan Damante, Brooke Mills and black Brenda Sutton encountering plenty of opposition in their struggle to lift the veil of administrative repression from Valley High School.

The school board doesn’t dig their bouncy, bra‑less attitudes or their attempts to liberate the student psyche via after‑hours rap sessions on sex. To finance their own alternative free school, the girls hatch a plot to hustle a local heroin pusher out of a fortune which leads to gunplay and a funny chase involving a gang of inept black gangsters and some equally klutzy Mafia types. High points include ludicrous scenes from an actual vintage VD scare film and a modern‑day student‑film version of same. Miss Mills comes off brightest of the title trio and some of the smaller roles are neatly cast, especially James Milhollin as the uptight principal and Charles Dierkop as a comic‑strip gangster. Julie Corman has provided a slick production, with crisp cinematography by Steve Katz. David Nuchtern’s music score features a parody‑rock theme song.

The Student Teachers was released on VHS by Charter Entertainment in the 1980s, but is long out of print.