Army investigator John Haven is out to catch some crooks using stealth, his wits and a limitless supply of marvelous hardboiled dialogue. Dick Powell trades a trench coat for a cowboy hat, while luscious Jane Greer swaps a .38 snubnose for a dance hall dress. A great cast, a witty script and Burl Ives’ singing voice make this a delightfully different noir-inflected oater. 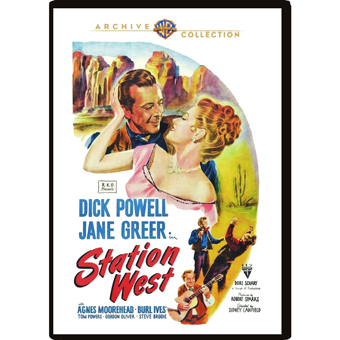 Want to discover a ‘different,’ fun ’40s western with clever plotting? How about a western where the dialogue is as good as the action? RKO’s Station West is actually as relevant to film noir as it is the development of the American western, but the plain fact is that it’s really entertaining — the likeable players seem well aware that they’re in something different. 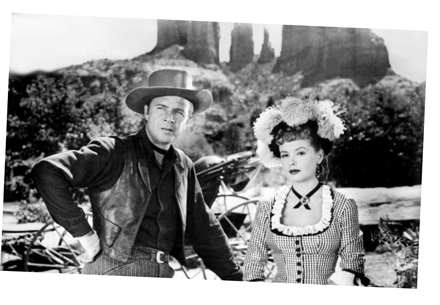 Into a small mining town comes the tough-talking John Haven (Dick Powell). He makes eyes at the local chanteuse-saloon owner Charlene (Jane Greer) but impresses the bartender (John Doucette) as a troublemaker and picks a fight with Army Lt. Stellman (Steve Brodie). But Haven is really a special agent for the Army, here to find out whom is murdering soldiers escorting gold. Haven doesn’t get along with the local Captain Iles (Tom Powers), who enjoys a cozy relationship with mine owner Mary Caslon (Agnes Moorehead), and uses Army soldiers and facilities to safeguard her gold. Haven bulls and blunders his way onto the local scene, defeating Charlene’s main thug Mick (Guinn ‘Big Boy’ Williams) in a fistfight and antagonizing attorney Mark Bristow (Raymond Burr), who is deep in debt to Charlene’s gaming tables. Haven exploits Charlene’s obvious attraction to harass her closest associate, Prince (Gordon Oliver). He soon uncovers secret dealings between Charlene and a work camp up in the hills, run by the unsavory Pete and Ben (Dan White & John Kellogg). Convincing Charlene that his only interest is selfish profit, Haven takes over a stage line to try to get Mary Caslon’s gold through. He is immediately held up, and his guard (Regis Toomey) is killed. The unseen bad guys also frame Haven for a killing. It’s not easy being a special undercover agent in the free-market Wild West.

What’s Station West’s connection to film noir?   My guess is that RKO production chief Dore Schary told producer Robert Sparks to make a western with the studio’s new tough guy Dick Powell, and make it just like the previous year’s hit Out of the Past. Sparks produced that Robert Mitchum hit. Jane Greer was the star, Frank Fenton an uncredited writer, and actors Steve Brodie and John Kellogg also appear. Even more to the point, although most of the main cast members are familiar from both westerns and mystery thrillers, the plotting and especially the dialogue tilt toward more toward the noir style. Yes, there’s a stage robbery, various shootouts and a fast chase on horseback, but most of the story involves Powell’s clever, wisecracking hero hiding his true identity, gaining the confidence of the shifty Charlene, and dissing various bad guys with his smart-aleck remarks. Foreign markets seemed hip to the film’s skewed agenda — the German title is Gangster der Prärie. 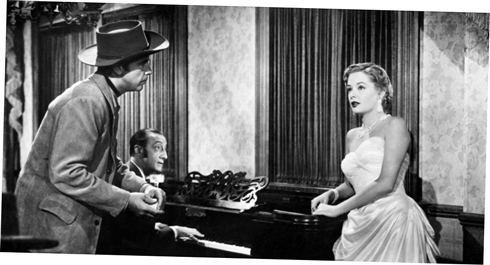 Essentially what we’ve got is a stylistic repeat of Out of the Past played on a less serious note but with the same kind of humorous dialogue exchanges, delivered with Powell’s deadpan mischievousness. Jane Greer is as beautiful as ever, even if the genre makes her a little less mysterious. But we recognize the dialogue style immediately. Starting in the ’70s, revival audiences for Out of the Past began laughing at the snappy dialogue, but in an approving way — the smart talk teased the hardboiled lingo from the pulp novels, and was often just plain funny. Just as with Robert Mitchum, Dick Powell is always looking for the funny remark, delivered with maximum attitude. Rocco Gioffre once explained exactly the pitch of this stylized talk: no direct question is ever given a straight answer. It is always a sideways remark, that implies an answer but also offers a cynical comment on something else. We in the audience are flattered to be let in on the joke, while the straights around Powell aren’t.

Dick Powell at first seems a little modern for a western, as he’s basically doing Philip Marlowe in the sagebrush. At one point he’s knocked unconscious, and when he falls to the ground we almost expect to see an animated black spot swallow the screen, with a Powell voiceover: “A black gopher hole opened up at my feet. I jumped in…”  But the filmmakers don’t go so far as to give Haven the laconic narration heard from filmic private eyes. We instead get fun character interaction that makes us want to perk up and pay attention. As soon as Powell and Greer sight one another there’s an instant chemical reaction, even in this genre-lite situation. Jane Greer has these ultra-deep eyes, you see… eyes that say she’s all heart and sincerity, even if most of what she speaks is a murderous calculation. 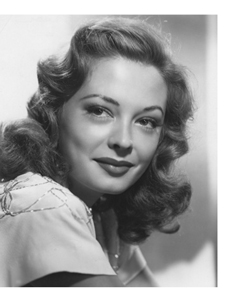 One of the first people we see is a young Burl Ives, already a radio and recording star, as a hotel clerk who writes ballads about everyone he sees. He’s sort of a benign version of Sir Lancelot in I Walked with a Zombie, in that his ditty “A Stranger in Town” seems to be telling John Haven’s story as it happens. I suppose that singing cowboy westerns had already been there and done that, and there’s always the sterling example of Hoagy Carmichael in the excellent Canyon Passage. But later ’50s westerns would try to distinguish themselves with catchy theme songs like this. Ives’ desk clerk isn’t wearing a beard, just a big smile. I’m not sure that we see him outside the one set; he may have been a one-day performer.

The distinctive hills of Sedona Arizona are often in the background, letting us know that this isn’t a cheap oater. Director Sidney Lanfield was basically a comedy director, for Bob Hope and others. The show is directed well enough, if not memorably. The action is undistinguished — don’t look for classic visuals — but the direction of the actors is fine. Agnes Moorehead properly arouses our suspicions, while each of the smaller supporting players are given enough emphasis, so that any of them could suddenly be revealed as a conspirator — Regis Toomey, Steve Brodie, Tom Powers. In the movies just two years but already an indispensible personality, Raymond Burr is excellent as a cowardly patsy for both sides. Charles Middleton is the sheriff, while gravel-voiced John Doucette should earn instant applause as a sour bartender. Of special note is Olin Howland, who gets a great scene-and-a-half with Powell, as a mining camp cook with an amusing personality. It’s pretty funny when the drunk from Them! gets equal time trading sly remarks with our proto-hipster hero. 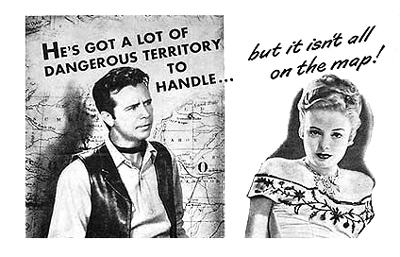 Perhaps I overestimate her appeal, but the reason that Jane Greer didn’t blossom as a major star must have something to do with being contracted to Howard Hughes. Nobody wants to say it directly, but historians that do the real research come close to stating that Hughes benched young beauties on the payroll that wouldn’t put out. Original ads for Station West ( → ) bore the kind of suggestive come-on taglines Hughes employed with his main mammary obsession Jane Russell. And it’s true that from this point forward Ms. Greer was not given any really worthy starring roles. At this point Dick Powell was well into his second career as a screen tough guy; I’m sure that nobody expected the callow ingénue of all those old Busby Berkeley musicals, the guy with the rosy-cheeked Gerber baby-food face, to have such a solid head on his shoulders. Several years later Powell found success directing and producing, and probably did far better financially than he would if he had ridden the descending arc of an acting career. And he was married to Joan Blondell and then to June Allyson, which had to insure some fun times. A cameraman I knew who started out on one of Powell’s TV shows remembered him as a genuinely great guy.

The Warner Archive Collection DVD-R of Station West is a clean and sharp transfer of a show that saw constant TV play, back in the days before cable. The RKO logo pops up looking especially good. The only odd thing is that a number of individual shots scattered throughout the show will pop to a totally different quality — not degraded, but just with much lower contrast. It’s not always optical sections, so I can’t account for it. It was only distracting once.

Burl Ives’ voice sounds soothing on the clean soundtrack. His gentle character here contrasts sharply with his menacing bad guys in the later The Big Country and Day of the Outlaw. Western sources approve of Station West but I can also recommend it to lovers of film noir’s stylized faux-hardboiled dialogue games. It’s very entertaining.