Director Roger Donaldson has enjoyed a rewarding Hollywood career, but he began in New Zealand where this fantasy mini-epic about resistance to a political takeover became the first Kiwi picture to win an international release and launch a national film industry. The film’s young star didn’t do too badly either — the ‘ordinary guy’ who becomes rebel terrorist is played by none other than Sam Neill. Sold as an action thriller, the show is really a primer on how a democracy can be turned into a police state, with the public’s full approval. 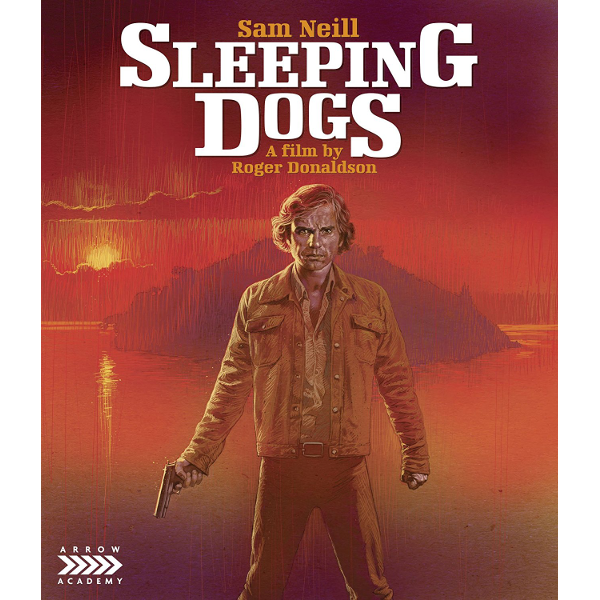 Genuine New Zealand movie star Sam Neill unfortunately made his first mainstream splash playing the spawn of the Devil in 1981’s The Final Conflict. His real claim to fame should be his starring role in his country’s initial foray into international-league filmmaking,  a politically touchy action thriller produced and directed by Roger Donaldson. 1977’s Sleeping Dogs is on record as the first NZ- produced feature to garner a major release overseas. If your only contact with Sam Neill is through the Jurassic Park pictures, this show will be a surprise. Just shy of thirty years old, Neill looks more like twenty and is as thin as a rail. Sleeping Dogs is a highly effective, excellently directed action-suspense show, with a politically sophisticated screenplay. The story imagines a New Zealand transformed by a reactionary government that creates terrorist incidents to justify a totalitarian police state. An organized armed resistance has already been formed when the Prime Minister (Bernard Kearns) has his secret police director Jesperson (Clyde Scott) kill several policeman to get public support for his referendum. Everyman Smith (Sam Neill) separates from his wife Gloria (Nevan Rowe) and his daughters when Gloria decides to live with Bullen (Ian Mune). Fed up with his life, Smith rents an island from some local Maoris. He tries being a hermit for a while and even grows a beard. But another government conspiracy soon catches up with him. Framed as a terrorist, he’s kept in solitary confinement until Jesperson offers to let him live if he’ll publicly confess to a number of terror crimes. Knowing the offer is worthless, Smith escapes and discovers that both Gloria and Bullen are part of the organized resistance. Hiding out at a rural motel, Smith can do nothing when the rooms are commandeered by a platoon of security troops led by an American training advisor, the Vietnam veteran Colonel Willoughby (Warren Oates). Smith doesn’t realize it, but he’s now being used by the resistance as well, to help with an armed ambush against the ‘U.S. Aid’ forces.

For his first full feature Roger Donaldson goes the action route, trying to depict an entire civil war on a small budget. The surprise is that he succeeds brilliantly, creating the impression of a larger conflict with carefully chosen action scenes while focusing on the personal experience of one hapless citizen caught up in the insanity. Careful camerawork does the trick, keeping us off-balance during chaotic street riots and shoot-outs by restricting us to Smith’s experiences. Long lenses limit what we see, making the action scenes more impressionistic. Since we seldom break away from Smith’s immediate story, we share both his paranoia and his worries about what may be happening to his wife and kids, left somewhere far away. Nothing is for certain. Early on Smith gains a pal in a friendly mutt gifted by a deal-making Maori. But the boy-and-his-dog pleasantries are interrupted by Smith’s unexpected arrest.

Excellent director Donaldson has the gift of finding good places for his camera. He doesn’t cut as frequently as the up and coming American directors of the day, but the action he stages is never predictable. He also has a sensitive touch with his actors, and gets excellent work from his guest star Warren Oates.

To keep us hooked, Donaldson makes intelligent use of the ‘withheld information’ tactic. Instead of boring us with involved expository scenes, we learn about Smith’s situation piece by piece. At first it looks like he’s leaving his wife, when instead we find out she’s left him, to volunteer as a resistance guerilla with her new lover Bullen. When the very American Warren Oates makes a sudden entrance with a platoon of soldiers we’re initially confused, until we learn that the New Zealand government is getting covert assistance from the United States. Assuming that the actual troops are local, this setup is similar to U.S. ‘advisory’ activities in a score of countries in Central and South America.

The objective scenes quickly sketch a familiar political ploy: a conservative government squeezes organized labor, which demonstrates. With the excuse of restoring order, the government sends in club-swinging police to incite violence that can be blamed on ‘rioters.’ When the demonstrations indeed become riots, secret security police create a fake outrage that the government can use to ask for special powers. One referendum, later, a democracy is a dictatorship and a police force an occupying army. The complacent public can’t fathom the ruthlessness employed in the coup. The secret cops that shoot other policemen to create martyrs, are themselves shot by a paid assassin so there will be no loose ends. Donaldson, Mune and author Stead have made an action story that decries the abuse of increasingly controlling governments. Jesperson’s offer to give Smith freedom for a public confession is a bald effort to manufacture support for the government narrative. Even Smith is not so naive as to think the cop will keep his word; Jesperson will of course rush his prisoner to a speedy execution. But both sides use the innocent Smith for their own ends. Sleeping Dogs acknowledges that the situation requires equally odious action by the rebels — Bullen threatens to shoot Smith as well, if he obstructs their cause.

Sleeping Dogs is not a leftist rebellion fantasy, such as the bizarre, paranoid Ice. In that experimental AFI film, dedicated Marxists foment violent revolution against an imagined U.S.A. busy invading multiple countries, including Mexico. Author Karl Stead’s paramilitary fantasy instead imagines New Zealand suffering the same ordeal as any number of countries where apolitical individuals are forced to take sides. We shudder at the thought of being an ordinary citizen of some country destabilized by civil war, and caught between pitiless opposed forces. You know, those unhappy foreigners we see on the national news each night. Ingmar Bergman looked at this dilemma in a refined manner in his classic Shame. In the modern world this is no longer a philosophical problem, but a new status quo for millions. It is literally an Age of Terror. As a production Sleeping Dogs sketches armed conflict without becoming an exploitation action picture. Donaldson doesn’t slight the action, but he also avoids hyperbole. Smith’s A Man Escaped– like dash to freedom from a moving car involves a brilliant if unpleasant maneuver: Smith throws up on the guard two whom he’s been handcuffed. The little group of resistance fighters are harried and chased by a police force that seems to be everywhere at once, aided by army helicopters and air force fighter jets. Bullen and Smith eventually run short of options. There are no feel-good personal payback scenes, and Smith’s only victory is that he denies Jesperson the propaganda triumph he seeks. He won’t become a show-trial poster boy for repression.

Bushy-haired Sam Neill is given fine support by an impressive cast of NZ and Australian actors. Wife Nevan Rowe is extremely effective in a part that’s kept to a minimum. Ian Mune as her lover is even better — the tensions between the two men begin complicated and worsen as the picture goes along. Most movies about involuntary rebels include lots of noble posing and imposed judgments — Sleeping Dogs may not be an overpowering movie, but
it has integrity to spare.

Arrow Academy USA’s Blu-ray of Sleeping Dogs is a sharp transfer of this colorful, visually handsome picture; although definitely not a travelogue it likely created interest in New Zealand as a country with nothing but good scenery. The audio is strong as well, making it a big improvement over the Anchor Bay DVD from back in 2004.

The actors likely pitched their dialogue to be more understandable by non-New Zealanders, which doesn’t happen on the slightly murky audio commentary with the film’s three principals, producer-director Donaldson, star Sam Neill and writer-actor Ian Mune. The track is not incomprehensible, it just requires some concentration. For their groundbreaking effort for New Zealand, these entrepreneurs should be known as real pioneers. Donaldson identifies himself as an Australian who came to New Zealand to avoid the draft, and considers his film’s rebellious political aspect to be no exaggeration. New Zealand, as you recall, is almost militant in its green environmental policies. It has a no-nukes rule that refuses to allow atomic-powered vessels into its ports.

An hour-long making-of docu from 2004 reunites most of the principal actors and almost everyone who worked on the film. In excellent BTS footage, we get to watch an adventurous film unit invent their own methods of making movies in a country that had never done so before. These include some risky stunts by people that may not know what they’re doing. Don’t put effects man Geoff Murphy in that category; he’s the crack director of the later The Quiet Earth and has directed second units on the big Peter Jackson epics. A second shorter documentary item from the year of release is included as well.