Bruce Dern is on a life-saving mission! After killing John Wayne in The Cowboys but before trying to massacre the Super Bowl in Black Sunday, his forest ranger Freeman Lowell committed space piracy to save the trees, man!  The only one back on Earth who seems to care is Joan Baez. Douglas Trumbull’s technically-accomplished first feature film does 2001 on a tiny budget, and creates something original, if a bit mushy. The screenplay by Derek Washburn, Michael Cimino and Steven Bochco reaches a wistful ending — but is it uplifting or depressing? 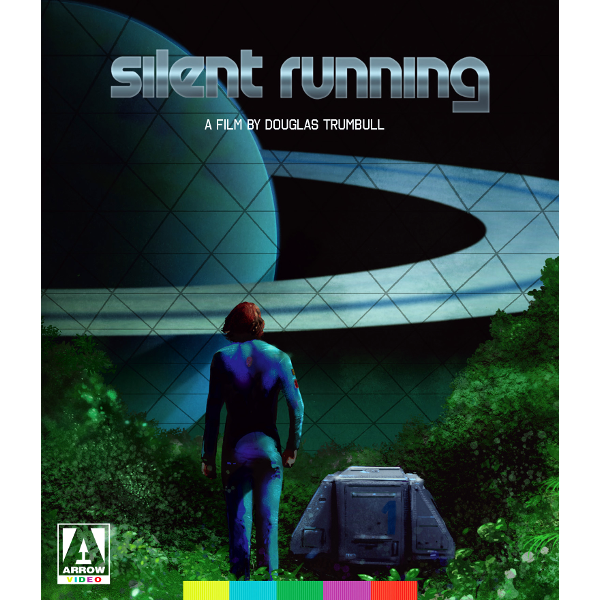 I’m surprised that I’ve never reviewed this show, as I worked with many of the people that made it. Before all that happened, in my sophomore year at UCLA I somehow got invited to a Universal press screening of Silent Running. I remember being critical of it for possibly unfair reasons. It’s certainly original and has a good attitude. As a very modestly budgeted film it quite brilliantly overcomes a tall stack of technical challenges. In terms of talented special effects personnel it’s a prime pit stop between 2001 and the visual effects bonanza brought on five years later by Star Wars and Close Encounters. One could also note that the credits include two writers that would soon become industry notables, but this environmental space opera doesn’t really connect with the later work of either of them.

The show’s premise predicts a near future in which all (most?) plant life on Earth has died out due to human mismanagement. A preservation workaround is a fleet of spaceships in a distant orbit, with caretakers that tend to living flora specimens in domed greenhouse pods. The gardener on the ship Valley Forge is the forest ranger Freeman Lowell (Bruce Dern), an earnest, dedicated idealist who believes in his mission. An uncomplicated soul, Freeman is fond of the Smokey the Bear song (Me too). The flying crew on Lowell’s ship doesn’t share his sense of duty. They shun him as an oddball, ignoring his pleas to stop racing their electric work cars through his gardens.

Orders come through saying that the program is to be abandoned. Freeman can’t believe that Earth is no longer interested in reforestation. When his colleagues begin jettisoning and destroying the precious domes, Lowell flips out. He is wounded resisting but manages to kill them all. Only one dome is saved. To cover his tracks Lowell lies to Mission Control. He invents an accident and steers his ship into a different orbit. ‘Rescue’ is months away, and to pass the time in isolation Lowell develops an eccentric relationship with his three robot gardeners, which he dubs Huey, Dewey and Louie. But then he’s told that his new orbit will take what’s left of the Valley Forge through the rings of Saturn — and he’s not expected to survive.

The early ’70s saw a surge in ecologically- themed sci-fi, what with No Blade of Grass, Soylent Green and Z.P.G. all delivering downer predictions of pollution-related devastation and / or unexpected viral plagues (hmmmm.) For Silent Running Douglas Trumbull leveraged his good name as a gee-whiz genius effects wizard, and with several other young film directors, got a piece of the same Universal ‘let the kids do their thing’ program that produced American Grafitti. His space-age ecological fable reaches heights of technical resourcefulness for its year, conjuring up impressive outer space scenes for relative pennies on the dollar. John Dykstra and Richard Yuricich worked out mechanical effects that would later be refined into ‘motion control,’ a buzzword heard endlessly after Star Wars. Ingenious front projection helped create the illusion of the garden dome interiors, avoiding gigantic set construction. A decommissioned aircraft carrier stands in for the Valley Forge interior, and pre-fab modules to store plant food and fertilizer help illustrate the garden-tending that we see.

The identities of the tiny robots Huey, Dewey and Louie were known to fans from the beginning; they’re played by young bi-lateral amputees skilled in walking on their hands. The lightweight ‘robot’ shells built around their bodies were designed to hide hints of human physiognomy. A big success, they have been noted as the precursors to Star Wars’ R2-D2 robot, which frankly is less impressive.

The best thing about Silent Running is still Bruce Dern, whose characteristically fearless performance keeps the episodic story in motion. Freeman Lowell leans on some of Dern’s out-there mannerisms, the psycho he was hired to play in role after role. The part of Freeman Lowell has great possibilities. He’s essentially a one-man Greenpeace movement, an activist pushed to violence to defend his principles. As Freeman is the only thing preventing the total extinction of plant life, we are naturally on his side. I suppose we must label Lowell as an outlaw terrorist, like the misguided anti-nuke boffin Professor Willingdon. Dern’s reluctant militant is too endearing not to like.

Silent Running never fully sold me on its basic premise. The fleet of caretaker spaceships isn’t even in Earth orbit, but in a solar orbit much farther away. Why?  So Lowell can ‘surf’ the rings of Saturn, of course.

The glorious tree-hugging idealism is just fine, as are the Schickele & Lampert songs voiced by Joan Baez. But the setup becomes confusing when we ask why the preservation domes need to be parked somewhere out in space. The only scenes on Earth are dream visions of a redwood forest, so we have no idea what’s going on down there. Is there no lobby or fringe ecological group for Freeman to identify with?   Are things on Earth so bad that all the vegetation has died, or are there still plenty of weeds, moss and golf course turf to produce oxygen?   Without plants, how can life on Earth survive at all?  What do all the herbivores eat?  Is humanity living on mushrooms?  Society doesn’t seem to have entirely broken down, as Mission Control still sounds like good old Chris Kraft, R.I.P..

The show’s ideas and sentiments are worthy. The little robots tending the shrubbery and shuttling along the exterior of the spaceship makes for some unique visuals. The only previous Sci-fi movie I know of to depict an orbiting greenhouse is the Soviet Nebo Zoyvot from 1959. But something’s missing. We can easily imagine George Lucas looking at Silent Running and deciding that audiences want space opera, not ecological fables. The real problem for audiences is that most ecological stories are defeatist downers, and Silent Running is no exception.

Freeman Lowell has ‘Noble Loser’ tattooed on his forehead — we know he can’t win. But our intelligence is insulted when we’re supposed to believe that Lowell can’t figure out why the plants aren’t flourishing, even though he’s taken them millions of miles further, away from the life-giving sun. Silent Running’s dogged realism just makes Freeman Lowell’s quest come off as a fool’s errand. If the plants are doomed anyway, why kill the other astronauts?  Sorry, tree-huggers, but Freeman Lowell’s actions are indefensible.

These discordant elements put a damper on the film’s glorious ‘save the Earth’ finale. The finale is dispiriting, despite the inspiring music and the vision of the jewel-like surviving dome. The hope offered is fairy tale stuff, discredited by the pragmatic realities of the situation. Huey will eventually run out of batteries, the plant food was back in the hangar, and those sun lamps won’t last forever either. If HAL-9000 were on board, he’d ask for a duty transfer.

The ‘message in a bottle’ ending leaves us with the sentimental touch of a solitary robot carrying on Lowell’s good work. Such a finish might work better in a lighter fantasy, perhaps one for children. The story of another cute robot cleaning up after humanity’s neglectful mismanagement eventually became an animated hit by Pixar: WALL-E.

Almost half a century later, Silent Running now reminds us of our deplorable state of ecological progress, with the world’s most important world leader calling climate change a hoax, and scary 60 Minutes reports showing us the efforts of an arctic seed bank to store varieties of grain seed that might become extinct. (More alarming seed bank news…)  Frankly, anything completely idealistic or conservation-minded seems doomed when tended by a humanity that does things like burn down the only repository of the world’s knowledge. On the 10 Freeway in Los Angeles are tourist signs calling out a civic attraction called The Museum of Tolerance. We know it’s a righteous institution, but the name reminds us of what Tony Hunter said about museums in The Band Wagon — they’re for Egyptian mummies and extinct reptiles, things so rare and forgotten that they can’t be found anywhere in the real world. Maybe in a hundred years, sociologists will sweep up the planet’s remaining traces of Tolerance, and put them in a spaceship for safekeeping.

None of this is meant to give Douglas Trumbull’s movie a bad rap … Silent Running’s ‘save the plants’ message is a perfectly good one to spread around in any form.

Arrow Video’s Blu-ray of Silent Running is a fine new 2K restoration from a 4K scan; it’s the best I’ve seen the picture since it was new. Colors look a bit more delicate than what I see on my 2015 Universal Blu-ray, but only on a big monitor. Some visual anomalies are built into the original negative, like a few front projection shots where the black of space becomes a little hazy. But shots like the push-in to Lowell in a spaceship window look better than ever. Douglas Trumbull approved the transfer, which Arrow produced on its own. The long list of video extras are split between older Universal-produced promotional items and Arrow’s new analytical pieces.

The older featurettes offer plenty of input from Douglas Trumbull, who assures us that he’s still on the forefront of new technologies for immersive movie experiences. For instance, we get several minutes about a Back to the Future ride that he directed for the Universal Tour. Bruce Dern offers a thoughtful interview on his acting career and his experience on the movie, and is highly complimentary to his director. The print of a 1972 promotional ‘making of’ show (50 minutes) reveals most of the movie’s technical secrets, and gets us up close and personal with the special people operating the elaborate robot costumes. It’s badly faded, which makes me think it’s Trumbull’s same 16mm print that I saw in 1976 … it was just as faded when only four years old.

The worthy new extras are a commentary by Kim Newman and Barry Forshaw, a piece on the music by Peter Schickele, aka ‘PDQ Bach,’ and a script analysis piece by Jon Spira, showing us some discarded narrative ideas for the movie. Arrow’s carefully-tended insert booklet (31 pages) has essays by Barry Forshaw and Peter Tonguette, and some fine color illustrations.

And kudos to Arik Roper’s new jacket art — I like it better than the original, which is preserved on a reversible sleeve. Some collector I was — I gave away my insert cards for Silent Running and Duck, You Sucker! because I didn’t like the way they looked.