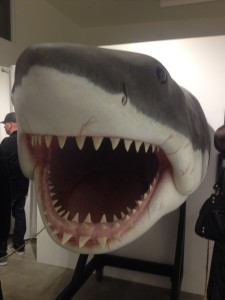 On Friday, November 1st, Trailers From Hell attended the opening reception for Hero Complex Gallery’s newest exhibition, presented by PangeaSeed and artist Craig Drake, a tribute to JAWS: “Smile, You Son of a Bitch!” Needless to say, as a lifelong JAWS fanatic, I was curious as to how these artists of all shapes and stripes could rival the already inimitable and quintessential (no Quint pun intended) JAWS movie poster by artist Roger Kastel (see the classic poster image below). But I had my thinking all screwed up, because that wasn’t what this exhibition was about. This exhibit was a tribute to the legend and heart of Steven Spielberg’s 1975 blockbuster, and was a fitting tribute to the ecological impact of real-life shark hunting.

Upon arrival, there was a bevy of tables assembled inside the main lobby. Outside in the conference room, there were people assembled. I took no notice of it, and continued on (though I would soon learn that was a fool’s errand). After depositing the requested $10 donation to help save the lives of sharks across the globe, I stepped through the tables of JAWS decorated pins and cookies, entering the gallery proper. I never thought I’d be face to face with Robert Shaw (Quint) or Roy Scheider (Brody), but there they were, in the flesh (seemingly). To the left side of the gallery was a replica of the stern of the Orca with life-sized replicas of Chief Brody, Quint, and Matt Hooper, staring over the edge of their sharkhuntingvessel at the rest of the gallery. These brilliantly rendered sculptures were provided by none other than KNB Studios, who create the makeup effects for such films and shows as THE WALKING DEAD, and Fearless Leader Joe Dante’s HOMECOMING. Behind me, directly to the right of the entrance, was a replica of the hull of Ben Gardener’s boat, the gaping hole where the shark attacked presented in minute detail. Ben Gardener’s head lolls in the left corner of the hole, his eye eaten, presumably, by hungry fish. Faraway, in the back of the room, created by the same talented effects artists, was a life-size replica of the head of JAWS (or Bruce, or The Great White Turd, if you feel so inclined), the shark, his mouth opened and ready to devour all of the artwork present. 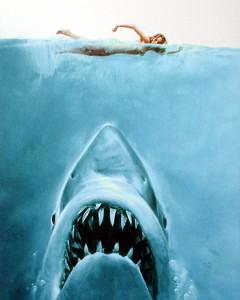 Going back to the conference room that I had chosen to ignore, I peeked my head inside of the door and my eyes immediately sprung wide and my mouth dropped open. There, at the end of a long conference table, sat JAWS’ Production Designer Joe Alves, providing commentary as he played various scenes from JAWS on an iMac. He talked with the fans, spinning yarns about his various career highlights, including his working on Disney’s SLEEPING BEAUTY, Hitchcock’s TORN CURTAIN,  JAWS, CLOSE ENCOUNTERS OF THE THIRD KIND, JAWS 3D (which he directed), and ESCAPE FROM NEW YORK. I got to meet and talk with Mr. Alves, and he was gracious and humble. I also ran into JAWS screenwriter and actor, Carl Gottlieb, who was entering just as I was leaving. We exchanged kind regards and he left me with the words, “any friend of Joe Dante’s is a friend of mine” (I’ll have to take him up on that friendship). 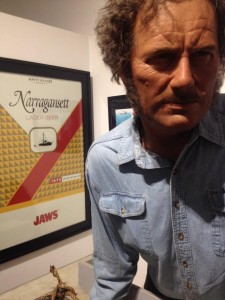 And then there was the artwork.

Walking into the gallery was like walking into a whirlwind of JAWS hysteria. On a pedestal directly ahead was a Lego version of the aforementioned Roger Kastel painting along with several other, smaller shark sculptures. On an adjacent pedestal sat a dinner plate with the many faces of x-eyed sharks, the inscription on the plate read: “eat a salad, not a sha.” Just ahead stood yet another pedestal, this one garnering the muppet-like visages of Quint, Brody, and Hooper, envisioned as hand-puppets (outside on a television screen, these puppets were used to recreate the famous USS Indianapolis scene). On the wall directly to the left were several large trading card inspired posters detailing the fact and fiction of  the hunting of sharks and of sharks themselves. A pleasant reminder that movies like JAWS are simply that: movies. 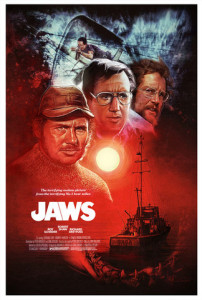 The artwork was diverse and indefinable, all of which can be viewed via the link provided at the end of this article. Several highlights, for this gallery-goer, were Paul Shipper’s (follow him @paulshipper) amazingly rendered Drew Struzan-esque alternative movie poster, “Out to Sea” (which can be seen to the left), “No Man’s Land” by JC Richard (whom you can follow @microcosmcmedia), Craig Drake’s “Quint’s Hope“, which adds some well-deserved sympathy to an almost entirely unsympathetic movie villain, “Y’all Know Me,” an original painting by David Grizzle (visit his site here: davidgrizzleart.blogspot.com), and various others, all of which are fantastic in their own right. Instead of listing off all of the pieces of artwork and their creators, I will leave it to you, dear TFH viewer, to either go to Hero Complex Gallery and see the show with your own eyes, or to visit the website provided below.

I urge you to check out this show, for both its artwork and its message. It’s a sight to behold and is certainly one of the highlights of my gallery-going career. 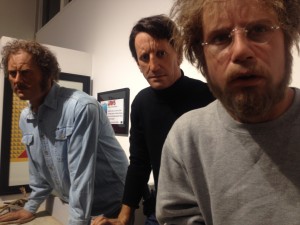 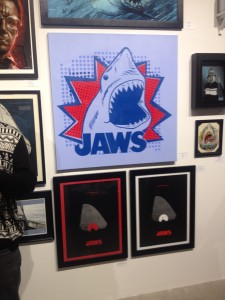 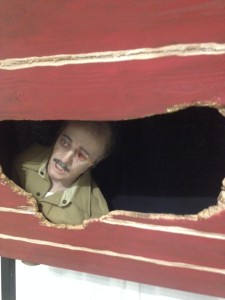 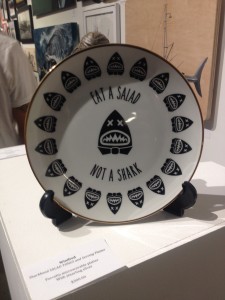 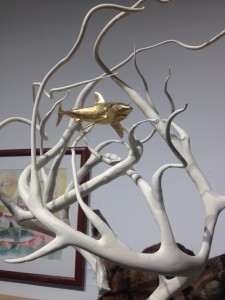 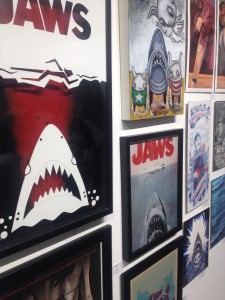 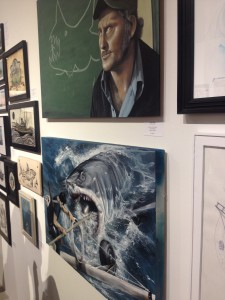 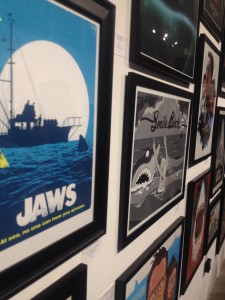 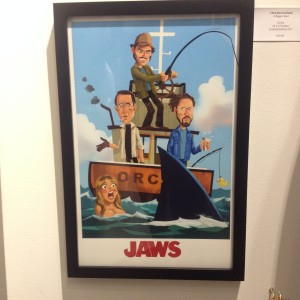 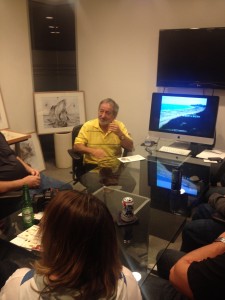 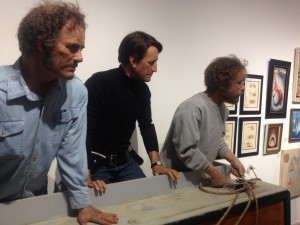 “Smile, You Son of a Bitch” exhibition will be on display November 1st thru November 3rd

UPDATE: “Smile, You Son of a Bitch! An Art Tribute” exhibit has been extended to November 6th through 9th.

For those of you not in the LA area, you can view and purchase artwork here:
http://www.herocomplexgallery.com/collections/sysoab

To learn more about the ecological damage of shark hunting, you can follow PangeaSeed here: @pangeaseed, or visit their site here: pangeaseed.org