There’s nothing more earnest than an English national epic. This one is about a valiant expedition that becomes a low-key disaster. Told straight and clean, it’s a primer on how to behave in the face of doom. 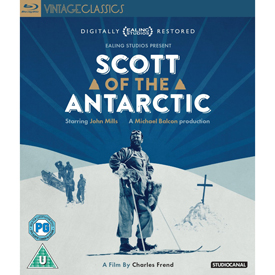 English film companies fell on hard times during the postwar austerity period. But the relatively small Ealing Studios maintained its creative underdog brand even after it was absorbed by Rank, and is still celebrated for wartime greats like Went the Day Well?, the singular masterpiece Dead of Night, Brit Noirs like It Always Rains on Sunday and The Blue Light, and its famed comedies starring the likes of Alec Guinness, Joan Greenwood and Dennis Price. The high times ended in 1957, but the studio’s good name has not been diminished. 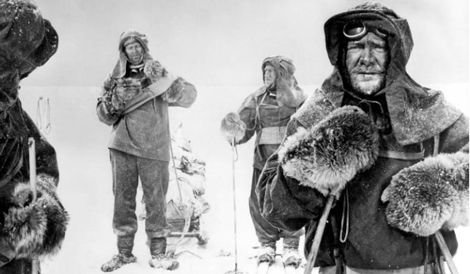 In 1948 Ealing’s Michael Balcon produced the relatively lavish Scott of the Antarctic, a Technicolor epic about Robert Falcon Scott’s attempt to reach the South Pole way back in 1912. A prestige picture all around, it’s neither an exposé nor an incisive character study, but an ode to British adventurism, pluck and initiative. Typical for England, the fact that the expedition was a disaster doesn’t dim the pride factor. In the spirit of ‘Hail fellow well met,’ we follow a band of adventurers with one foot and two frostbitten toes already in the legend books. 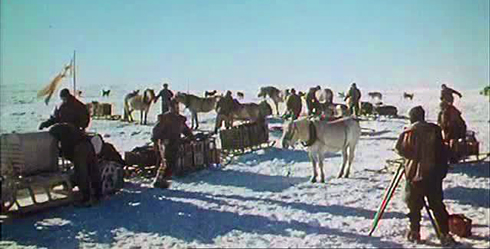 Captain Scott (John Mills) gathers a group of expedition volunteers with the help of his number one, Teddy Evans (Kenneth More). As the government is disinclined to bankroll the adventure, Scott goes on speaking tours to raise funds, and enlists his old friend Dr. Wilson (Harold Warrender) as a scientific expert, to counter possible claims of glory hunting. Old colleague Taff Evans (James Robertson Justice) is as strong as an ox, while volunteer Lt. Bowers (Reginald Beckwith) is small but tough, with an excellent attitude. One soldier accepted for the expedition is disillusioned after service in India, while others seek the adventure as its own reward. Although the mission is primarily scientific, the men naturally want the fame of being first to the pole. When the money comes in Scott sets sail in a leased ship that’s not a perfect choice. They have some difficulties getting through the ice, and before they land they find that Norwegian Roald Amundsen is making an attempt to get to the Pole first. Everybody says it isn’t a race, but in actuality it is. The actual assault on the Pole is an epic trek across hundreds of miles of rough terrain. The party is large at first; as various camps are established, supplies for the return trip are left behind and more men return to the base camp back at the coast. They must climb a glacier and then ‘sprint’ hundreds of miles to the Pole itself. They start with mechanical tractors, which break down early, and then rely on dog teams and ponies for portage. All seems to go well until they receive bad news when not far from their goal. And on the retreat, everything seems to go wrong.

There’s no dismissing British pluck and spirit, says Scott of the Antarctic with every scene. Scott’s crewmen are hearty fellows all, capable souls that maintain their equilibrium right unto oblivion. They’re volunteers who knew the job was dangerous, and part of the bargain is to keep positive no matter what happens. Even a man being poisoned by gangrenous frostbite refuses to complain. To some this will make the show seem very dry; I surely prefer it to having characters go nuts or become religious maniacs. Can’t function and know you’ll hold up the march? That’s a cue to quietly take ‘a little walk’ into a blizzard. Another man dies like a horse in harness, refusing to ask for sympathy. Very soon into the trek it’s difficult to tell some of the men apart — they have frizzy beards, wind-burned faces and squint at all times. 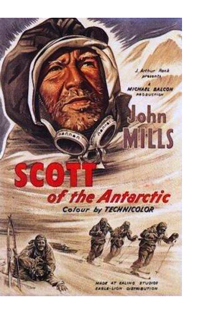 Basically true to history and free of exaggeration or undue dramatics, the approach is pure Brit understatement. Director Charles Frend extended this tone to his later The Cruel Sea, a Navy drama that accepts the tragic events of war with an even temper.

Part of the reverent tone is due to the film being made with the cooperation of the families of the participants, all of whom come off as extraordinary heroes. The final scenes make use of actual notes left by the lost expedition members, to be found the next Spring. These read as stoic poetry, words to be etched on monuments. Scott’s explorers have something in common with modern astronauts. Although they’re not daredevils, their professional contract expects them to face the worst with an optimistic smile.

Every era needs heroes, and if we can find some that aren’t engaged in warfare, all the better. Both Captain Scott and Doctor Wilson leave behind lovely, gracious wives that send them off without showing their fears and misgivings, the Brit ideal for wifely loyalty — supporting the hubby beyond all reason is the approved mode of behavior. The writers Walter Meade, Ivor Montagu and Mary Hayley Bell stay away from soapy complications. But quite effective are a couple of dream sequences, daydreams of the explorers thinking of their wives back home. They’re also curiously unemotional, but are given just enough of a weird feeling to remind us of films by Powell & Pressburger.

The movie is a major accomplishment for Ealing and director Frend, who despite having Technicolor enjoyed few other production luxuries. Almost all of the character scenes were filmed on relatively tiny sets that match well with second unit footage shot in several snowy locations. I assume that matte paintings were used, as the film never seems claustrophobic. Cameramen Osmond Borradaile and Geoffrey Unsworth took charge of the distant units, but Technicolor expert Jack Cardiff is responsible for the realistic treatment of the dramatic scenes. The color is austere in the bleak, often featureless expanse of Antarctica. The close-ups don’t glamorize the actors, and scenes in tents take on the pale colored light coming through the canvas. Antarctica is unpleasant and unforgiving, a real ‘why the heck are you people doing this?’ kind of place.

John Mills leads the parade of stoic heroes. James Robertson Justice has none of the extra weight he put on later in his career, and the well-known Kenneth More was at this time still a fairly minor player. My favorite actor is Reginald Beckwith, whose character is both the smallest and most rugged. Genre fans know him as the spiritualist ‘Mr. Meek’ in Jacques Tourneur’s Night/Curse of the Demon, but here he’s as tough as nails. Finally, we have to mention the presence of young Christopher Lee, here in only his sixth movie. He’s only seen in some group shots early in the trek, smoking a pipe and laughing and saying only one line. 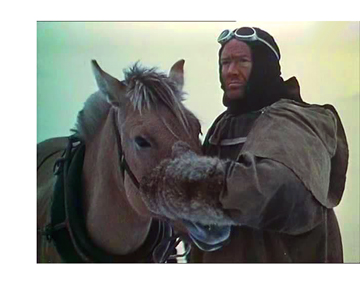 Another aspect of the film bears mentioning, if only because I keep running into people that can watch movies where people are shot and tortured, yet will not tolerate any movie with real or imagined scenes of animals being mistreated. The Scott expedition brought with them teams of ponies and several dozen dogs, all of which were worked until they were injured or gave out, and then killed and eaten. The issue is so important to some animal lovers, that they place any such movie out of bounds, as ‘not acceptable.’

Making a huge contribution is the music score by Vaughan Williams, which strikes a note of unbridled pride up front, and expresses well the harsh beauty of the oppressive polar region. Scott of the Antarctic is the kind of stiff upper lip British epic that might be lampooned on The Goon Show, or dissed by the New Wave directors as a stuffy relic to be forgotten. But it’s neither dull nor arrogant nor politically stiff, as are some odes to King and Country of the filmic past. This is class filmmaking all around. 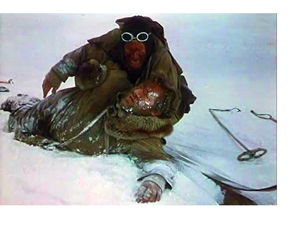 Studiocanal’s Region B Blu-ray of Scott of the Antarctic is a good restoration of a film that, at least in America, once showed in contrasty transfers possibly taken directly from Technicolor prints, a bad idea indeed. The show looks good visually and the colors are vastly improved from anything I’ve seen: one can tell the characters apart more easily now.

The extras begin with a series of interview featurettes. Explorer and author Sir Ranulph Fiennes (the Baronet of Banbury, no less) gives us his take on the real expeditions of the time, defending Scott against several books that criticized him as a failure. As a real polar explorer, Fiennes makes some flattering points about Scott, while also admitting that the expedition had other shortcomings. The famed conductor Sir Andrew Davis is present to discuss Vaughan Williams’ music score. Jack Cardiff talks briefly about his camerawork, mentioning that he had to fight with Technicolor lab people to get the strange effects he wanted. A final featurette sets up various Pinewood personnel to discuss the film restoration, with examples. The new version was made by transferring the three original B&W Technicolor film strips (yellow, cyan and magenta) and recombining them digitally. As an added bonus, we get some home movies by John Mills, showing the cast with dog and pony teams on a real high-altitude snowy mountain. Last up is a fat gallery of photos from the set.

Remember, this is a Region B Blu-ray; it won’t play in a domestic Region A disc player. Special thanks to Craig Reardon, as this much-desired disc is a gift. In appreciation of Craig’s generosity, I’m sending him a list of other desirable films that he can accidentally order two copies of.