Talk about raising the roof with song — George Nierenberg’s documentary is still considered the best on gospel music. Made in the early 1980’s, the show caught the greats of decades past, now happy to describe the history and future of their work: Thomas A. Dorsey, Mother Willie Mae Ford Smith. The testimony of singers and groups just getting established is good as well, but of course it’s the spirit-raising performances — here caught as never before — that make the show unforgettable. Milestone includes outtakes, interviews and input from the director. Helped greatly by rave reviews, 1982’s Say Amen, Somebody received major attention nationwide. Director George T. Nierenberg had done well with a 1979 feature about tap dancers called No Maps on My Taps. Few feature documentary films back then scored a theatrical success, but this show found its audience quickly. Roger Ebert called it “joyful … one of the best musicals and one of the most interesting documentaries. And it’s also a terrific good time.”

The show is an intimate look at gospel music as performed by church choirs and special vocalists. Performance sequences are interspersed with interview testimony, with special focus on a pair of talented old-timers that helped originate the gospel movement back in the 1930s. Gospel singer Willie Mae Ford Smith holds a microphone in one hand, using the other hand to steady her walker. Younger singers respectfully call her ‘Mother.’ Their boisterous performances can look like big productions, but in grassroots gospel the choirs sing not for money but for the glory of God — in church, at home, everywhere. One singer describes the feeling: “I forget I’m in the world. Sometimes I just want to head off.” 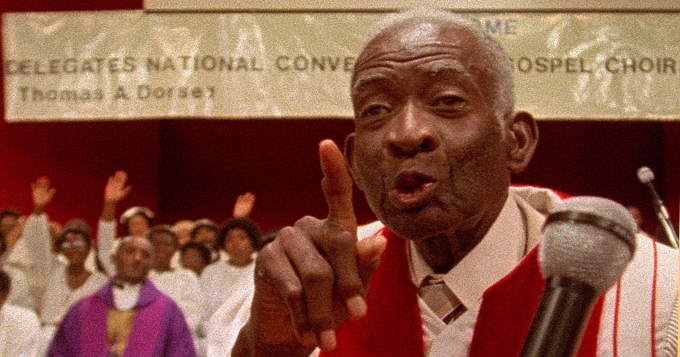 A lot of attention goes to the the elderly but very vital Dr. Thomas A. Dorsey, who eagerly tells his story to the interview microphone. He is a founding father of gospel and wrote much of the classic gospel songbook. The spirited, opinionated Dorsey began his career as a pianist for the legendary blues singer Ma Rainey. The film’s title comes from one of the old man’s remarks to the documentary crew. Accustomed to hearing a call-response pattern, when he finishes a speech he addresses the cameramen out of frame: “Say Amen, Somebody.”

Other gospel performance documentaries had been filmed but Nierenberg’s is much more than its music. Variety called it a “superb documentary feature” and “a model of emotional communications.” Most of the non-performance footage is live-action testimony. Vintage photographs are used sparely. We get to see some nice older B&W footage of Mahalia Jackson singing, but the fact that so little exists makes us appreciate this documentary even more. The show focuses on gospel choirs as much as the ‘headliner’ name singers: The O’Neal Twins, Zella Jackson Price, and the Barrett Sisters share attention with the Interfaith Choir and Gospel Unlimited. In a scene filmed at a gospel festival, a DJ in a booth promotes the names of singers as if announcing the lineup for a rock concert.

Dr. Dorsey and ‘Mother’ Smith are concerned with the future of gospel. Both address the need to reach a younger audience, and argue about the old days of The Great Depression when churches strongly resisted singing during services. Many congregations of the 1930s and ’40s thought gospel was un-pious raucous noise. Ministers didn’t want ‘sinful’ blues singers to infiltrate their churches. It took time for the passion and joyful frenzy of gospel singing to be accepted as spiritual. Ms. Smith quotes one minister that didn’t mince words: “We don’t want that coon-shine stuff in here.”

Mother Willie Mae Ford Smith is also quick to tell us that the music doesn’t drop from heaven, but must be promoted. The documentary follows the business end of gospel as well. One singing duo asks how gospel can thrive in a society where all success is judged on hit-making. The songs aren’t all purity from the pulpit, either — one O’Neal tune is called “Jesus Dropped the Charges.” Younger gospel singers must be committed to their careers, and need special support from home. When we see singer Delois Barrett Campbell serving breakfast to her husband, the documentary makes a clear statement about gender equality. She very much wants to continue with her singing, and he’s asking when she’s going to stop performing and help him more. 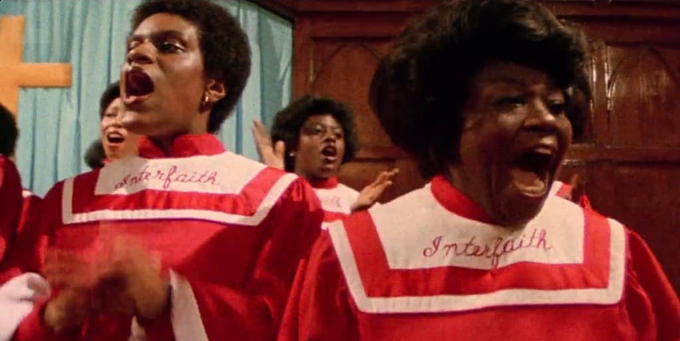 The film’s performance scenes are what wowed audiences; they have real power. Director Nierenberg filmed with multiple cameras, which accounts for the many extra cameramen in the credits. The enhanced coverage enables editor Paul Barnes to cut to synchronous audience responses, not random cutaways. The judicious cutting mirrors the excitement of the gospel performance, the spirited music becomes contagious. The editing also underlines the authority and power of the charming Willie Mae Ford Smith. One cut jumps from Smith reciting a song lyric in conversation, directly to her belting out the same words in a full performance. The ever-colorful Smith is quite a personality: “I may have cracks in my voice as wide as the banks of the Mississippi, but the old Mississippi River keeps on flowing.”

The level of performance excitement in Say Amen, Somebody has been compared to that of Martin Scorsese’s The Last Waltz from 1978. Yet director George T. Nierenberg’s method did attract criticism. Nierenberg admitted to The Christian Science Monitor that some moments of dialogue interaction only appear to be candid: he considered his subjects to be ‘characters’ and directed some planned scenes to look “as if it happened spontaneously, on the fly.”  The example he mentions in his commentary is an encounter that Willie Mae Ford Smith wanted to see in the movie. They chose the song she would sing together. The fact that something isn’t entirely spontaneous doesn’t make it fake. Nierienberg allowed his subjects to control the movie.

Back at UCLA Film School activist filmmakers would sometimes shout that white directors should not make movies about black people. Nierenberg’s show refutes that notion; nobody would call it cultural poaching, ‘invalid.’  He gives these gospel music notables a broad stage to openly speak their minds, to say the truth as they see it. It’s also obvious that the show wouldn’t exist without his intense interest. Thomas A. Dorsey lived only another ten years without making any other film appearances.

Having pretty much rejected most forms of evangelism as seen on money-making TV programs, I have to say that the faith-based communal singing, thought, speeches and sentiments in Say Amen, Somebody strike me as authentic. Smith and Dorsey are in no way hucksters; nobody here seems in the game primarily for the money. They are transported by their music, and audiences for this film are too. 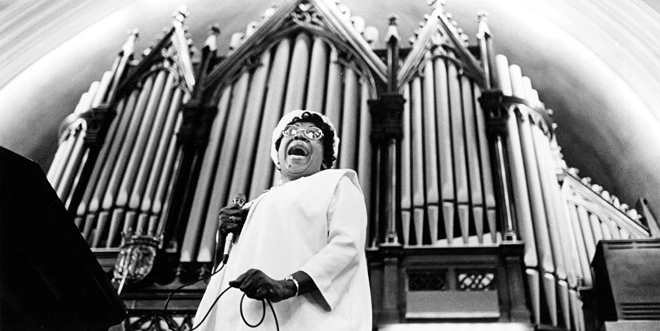 Milestone Cinematheque’s Blu-ray of Say Amen, Somebody is a powerful, uplifting musical experience. This disc release follows a successful theatrical revival from 2019, just under the pandemic wire, so to speak.

We expect a show like this to be filmed in 16mm, but Say Amen, Somebody is in full 35mm and looks it — the transfer is immaculate and as sharp and clear as any docu we’ve seen. The multi-camera performance shoots are really impressive — there’s so much audience interaction that cutaways to generic responses wouldn’t have worked. We’re impressed by how the cameramen stay clear of each other’s shots.

George T. Nierenberg’s commentary expresses his pride in his achievement but also profound respect for his interview film subjects. He comments on many moments that were indeed ‘accidental.’ The on-the-fly dialogue sequences never seem rehearsed in the slightest, but he doesn’t make claims of cinéma vérité and describes his relationship with his subjects as a collaboration. The other extras include copious outtakes, film and audio. Nierenberg’s video introduction from a film festival gives a look at the friendly, open-minded filmmaker; he tells us that Ry Cooder suggested that he make a film about Gospel music. The film’s title, he says, is a fairly common gospel phrase that he liked.