Ingmar Bergman’s ‘sad comedy’ finds desperation and adultery in his favorite milieu, the theater. He also gets to contrast the self-important thespians with those dubious circus nomads, even as both groups are shunned by civilian society. Criterion just issued a monster gift box of their entire collection of Ingmar Bergman films on Blu-ray, but they’re also continuing with single releases of the Swedish maestro’s classic titles. Step back before 1957 or so, and one will find more variety of tone in Bergman’s output. The late director is still firmly associated with art film classics like Persona but his more demanding meditations on ‘the human condition’ were preceded by lighter comedies and relationship pictures. 1953’s Sawdust and Tinsel may be the film where Bergman’s most distinctive themes came together for the first time. On the surface this circus story is a farce of romantic intrigues and sexual politics, but behind it all broods the familiar quiet desperation of Bergman’s later work, the introspective navel-gazing meditations on isolation and despair. The characters chafe in restrictive relationships yet cling to them; fear of abandonment and poverty takes precedence. Bergman also satirizes the pomposity of theatrical people, who consider the circus people their inferiors.

Sawdust and Tinsel was Ingmar Bergman’s first collaboration with cinematographer Sven Nykvist, and their creative harmony is evident in the film’s many beautiful and expressive images. The screen vibrates with sexual energy, doubtless due to the director’s infatuation with his leading lady Harriet Andersson. In this show, sex is both a natural wonder and a source of great humiliation.

The Alberti Circus limps into town broke and unprepared to put on a show. Owner Albert Johansson (Ake Grönberg) and his beautiful mistress Anne (Harriet Andersson) dress up to beg costumes from the town’s theater, run by the imperious Mr. Sjuberg (Gunnar Björnstrand). Sjuberg plays high and mighty with the ‘lowly’ circus people but relents. Albert has a second errand in town. He left his wife Agda (Annika Tretow) and two sons here three years ago, and harbors a desire to quit the circus (and Anne) and return to the security of keeping a shop. He pays Agda a hopeful visit but finds that she prospers, enjoys her liberty and has no longer has any use for him.

Anne is no fool; she immediately knows what Albert is up to. Afraid of being abandoned, she contacts Frans (Hasse Ekman), a cruelly narcissistic actor she flirted with earlier in the day. After more insults about the baseness of circus folk, Frans seduces Agda with the promise of an amulet she can sell for cash. The theater people attend the night’s circus performance, with both Frans and Sjuberg intent on putting poor Albert in his place — as a cuckolded failure.

Sawdust and Tinsel builds on the tradition of older continental show-biz dramas that concentrate on unusual relationships. E.A. Dupont’s silent Varieté shows the eccentric living arrangement between an older trapeze artist and his young and desirable wife, while Josef von Sternberg’s The Blue Angel charts the degradation of a respected but naïve schoolteacher who falls for a cabaret singer. Bergman’s premise presents as its starting point another May-December relationship. Albert would like to chuck the circus life and rejoin the family he left a few seasons before. His younger mistress Anne is also desperate for security, and needs the experienced Albert to keep her from making foolish decisions.

Albert has good reasons to be despondent. His circus must weather an unbroken string of humiliations. The town constable confiscates their horses and forces the costumed performers to roll their circus wagon away by hand. The theater people treat their circus cousins like charity cases, heaping insults upon the vagabonds as a way of justifying their own relative lack of dignity. The actors claim that they create art, while the circus performers merely risk their foolish necks.

Having his profession denigrated isn’t all that poor Albert must endure. His wife Agda has tasted her independence and found peace of mind being in business for herself; she’s taught her two boys to hate the circus as well. Albert claims that he could be a good husband, but Agda’s no longer interested. She’s finished depending on men and coldly lets Albert know that she doesn’t lack for companionship. Three years have passed, and husbands are no longer welcome.

Agda’s opposite number is the sexy but inexperienced Anne, who knows how to flirt with the primping Frans but is an easy target for the actor’s caddish seduction tricks. When the defeated Anne returns to the circus caravan the truth quickly comes out, and Albert throws himself into despair. “We’re both stuck,” he grumbles, working through his jealousy and anger.

But worse humiliations are yet to come. The bad omen in The Blue Angel was a mysterious clown who kept confronting the cuckolded professor with his true mirror image. Sawdust and Tinsel begins with the disturbing back story of the circus clown Teodor Frost (Anders Ek), who must retrieve his emotionally reckless wife Alma (Gudrun Brost) when she suddenly decides to swim naked with an entire troop of artillerymen. Frost must pull Alma from the surf and carry her back while both soldiers and civilians jeer. Like one of the hallucinations in his later movies, Bergman presents this nightmarish episode purposely overexposed and missing natural audio, like a demented silent movie. 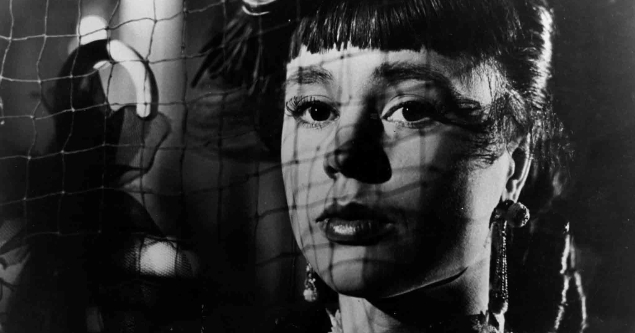 Frost is still in the circus, and still with Alma. He and Albert share a hilarious scene in a caravan as Albert gets drunk and threatens to kill himself. He suggests that Frost help him kill several others as well. Albert instead realizes that he loves people and forgives Anne. He and Frost haven’t destroyed themselves by accepting their flawed women, quite the contrary. Frost accepts life’s humiliations. When he’s not wearing greasepaint he doesn’t care what the world thinks of him.

The malicious theater people attend the show, bent on tormenting Albert yet further. When Anne performs as a horse-riding Spanish señorita, Frans shouts compromising catcalls from the stands. Albert responds with his whip, and the Circus Alberti becomes a fight arena.

The beauty of Sawdust and Tinsel, and what makes it more accessible than some of Bergman’s later films (Hour of the Wolf, Shame) is that it eventually expresses a faith in people. Albert and his circus are in some ways defeated, but there’s enough money in the till to keep them together and moving. 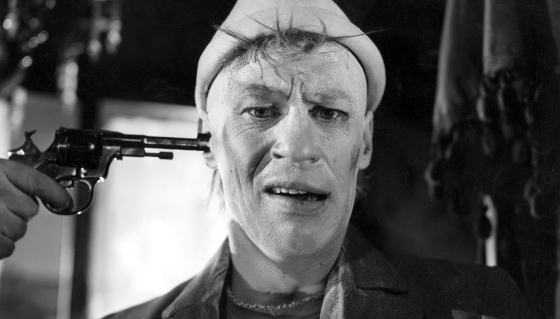 Ake Grönberg is a solid presence as the paunchy, conflicted Albert and Anders Elk’s Frost lightens many scenes … Frost is such a good sport, he allows Albert to put a gun to his head: “I need to live. I, uh, have to take care of my father.” As the predatory Frans, Hasse Ekman wears a permanent sardonic smile, and Bergman’s later leading man Gunnar Björnstrand is properly intimidating as the theatrical producer. 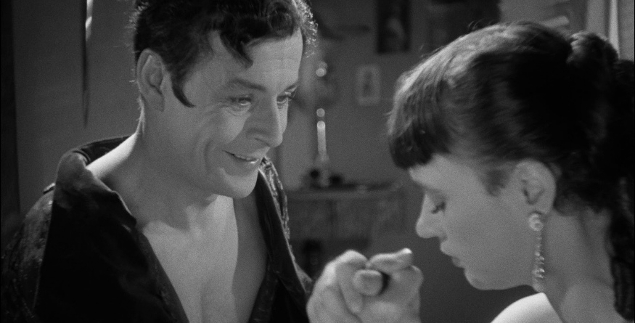 The Criterion Collection’s Blu-ray of Sawdust and Tinsel brings back this less frequently revived masterpiece in a beautiful new 2K scan and restoration, with a clean soundtrack. It was produced by a different company than most of Bergman’s films, and for that reason has not been included in many export packages. Its exploitative American title was The Naked Night.

The extras have been retained from a 2007 DVD release. Commentator Peter Cowie goes into all aspects of the production and the development of the Bergman / Nyqvist relationship, and promotes the film as the director’s first work to incorporate most of his major themes. The only other extras offered by Criterion disc producer Johanna Schiller are a couple of video introductions by the director and an insert booklet essay by John Simon. A piece by Catherine Breillat that was included in the DVD release, has been dropped.