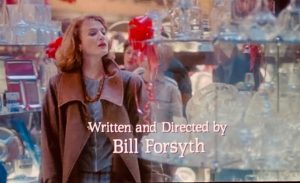 Scottish director Bill Forsyth has a strange way, one for which audiences should be eternally grateful, of delivering a symphony of melancholy notes which register in his movies with a sort of blithe exhilaration instead of the customary patina of hopelessness they perhaps might otherwise be subject to in the hands of another filmmaker. One senses the discomfort, the confusion, the weariness some of Forsyth’s characters experience without feeling overwhelmed by them, and he infuses his best films with such lyrical, unexpected, transformative beauty that it’d be almost impossible to leave them with anything other than an entirely bearable lightness of being; suffocating ennui is not on this filmmaker’s palette.

Pauline Kael said of Forsyth’s much-beloved Local Hero (1983) that the picture was “like one of those lovely Elizabethan songs that are full of tra-la-la-la-la-las,” a quality that most appreciate about the film but that some use as a way of ticking down the picture’s overall worth into a somewhat more trivial margin. (Kael herself seemed to slightly discount the picture, after spending her review accounting for its offbeat charm and perspective, by claiming that it wasn’t “any major achievement… but it’s true to itself.”) And beneath those tra-la-las, beneath the fog of contentment that the protagonist of the film, the local hero, experiences upon arriving in the strangely magical Scottish coastal village and subjecting himself to its casually odd cadences, one senses Forsyth’s melancholy, the tinge of regret that the whole world can’t be as special as this place, which only fully emerges over the film’s final shot. 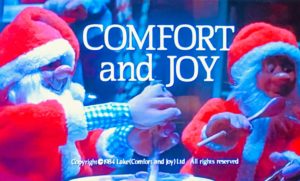 Kael also said of the Scottish director in that review that “Forsyth seems to go where impulse and instinct guide him; he’s an entertainer-filmmaker who gives free play to his own sense of the ridiculous and his own sense of beauty.” This may be even more true of Forsyth’s follow-up to Local Hero, 1984’s Comfort and Joy, than it is of its more-celebrated predecessor. Comfort and Joy tracks a complacent Glaswegian radio personality, Alan “Dicky” Bird, played by Scottish character actor and national treasure Bill Paterson (The Singing Detective, Traffik, The Adventures of Baron Munchausen, The Witches), who is quite suddenly unmoored from his complacent life when his kleptomaniac girlfriend decides to leave him in the midst of decorating their apartment for Christmas.

Disoriented, saddened, longing for the pleasures of his lost love, yet constantly casting an eye toward possible rebound romances, he catches the eye of a lovely lass in an ice-cream truck one day while caught in heavy city traffic and decides to follow the van, buy a sweet treat and perhaps strike up a conversation with the entrancing young woman.  Up to this point the viewer, especially one unfamiliar with Forsyth’s other films, might have a sense of what’s coming next. But of course, as Kael observed, this director is rarely beholden to anything beyond his own curiosity and impulses, and in pursuit of a fresh perspective on midlife crisis Forsyth lands Dicky Bird, who being the host of a popular light-information morning radio program is beginning to rankle at the triviality of his own contributions to the societal good, in the middle of a violent (but persistently silly) confrontation between two rival ice-cream companies. 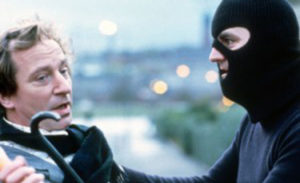 Forsyth took inspiration from an actual, and far more seriously violent and criminal conflict that had been in Glasgow headlines for years, but though allusions are made as to the underworld influences present amongst the soft-serve butting heads in Comfort and Joy, the scuffles depicted in the film are more easily remedied by recipes, or a wry, quizzical comment, than a hail of bullets or crowbars applied to kneecaps. In one big fight scene, some of the assailants wield large wooden mallets that wouldn’t be out of place in a Wile E. Coyote escapade. And there’s that the incessant, inescapable jingle emanating from the Mr. Bunny ice cream van. It’s a musical joke, on Alan and on the audience, of course, that approaches earworm levels of pleasing madness and tempers the real-world consequences of vendor-on-vendor violence with the assaultive capabilities of a lighter-than-air melody. But that joke is topped when Alan finally makes his way into the Mr. Bunny stronghold and we see (though he barely notes it) the hilarious origins of its recording, which are themselves incessant and sublimely ridiculous— in the midst of a chaotic warehouse filled with damaged ice cream vans and the autobody specialists repairing them, a man stands hunched over a xlyophone, repeatedly picking out the jingle’s melody, while another man stands with a microphone recording the sounds, interjecting a never-less-than-jolly “Hello, Folks!” over and over again at exactly the right interval. There you have the perfect Bill Forsyth trajectory—where you think you’re going is never quite where you arrive. 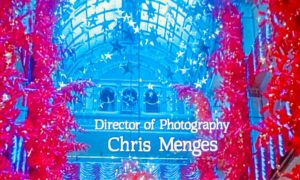 The film is shot by Chris Menges, who also conjured the visual poetry of Local Hero. And here Menges delivers what might be the most quietly, unexpectedly lovely visual portrait of a city that I’ve ever seen in a movie— his Glasgow is dazzling in its softness, in its ephemeral curiosity; in the compression of buzzing cars and hilly roads that are flattened against one another and yet somehow expanded free of traditional physical constraints; in the glow of distant lights illuminating structures and interiors in ways that emphasize an intangible mystery about what might be going on inside, as if they were Christmas ornaments in a diorama of a city which displays all indication of existing in the real world yet seems almost supernaturally beautiful; in the gray gloaming that seems to have settled over that cityscape and its old and ascendant buildings, not like gloom but instead a blessing. This brilliant cinematographer-magician’s dexterity and sensitivity with light imbues Dicky Bird’s wanderings through man-made constructs with mournful beauty; he distinguishes Glasgow in the same way he did the Scottish coast, not with picture-postcard platitudes, but with gorgeously integrated notes of solemnity and lightness that seem to leap directly from the discombobulated disc jockey’s modesty-scaled crisis of identity and purpose. 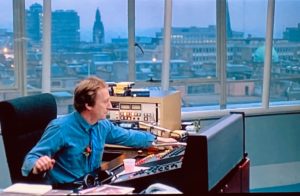 And in the modulation of their particular contributions, both Forsyth and Menges crystallize the humanity that descends on Comfort and Joy like a light snowfall, or the expressive, oddly cheering gray fog in which the city seems perpetually enveloped here. As writer-director Forsyth characteristically zeroes in and, abetted by Menges’s poetic expressiveness, encapsulates the absurdity of conducting dire business over diary-based sweets, he manages to never forget that absurdity has a human scale. When Alan scoffs at grown men fighting over something as inconsequential as ice cream, the almost offhand way the observation is redirected to him (“And what business are you in that’s so important?”) has an unexpected sting. Alan’s rediscovery of himself as someone other than Dicky Bird, besotted partner to a woman who finds him disposable, and his emergence from his cloud of depression over the dissonance between his sense of purpose and the simple human need set in relief by the lyrically decorative trappings of the holiday season, is compelled by his reluctant involvement as mediator between the two rival confectioners. But it’s in integral element to the film’s decidedly odd tone, its odd humor, its raison d’etre, that even though Alan may be moving toward an actual state of happiness, the melancholy he feels, and that we viewers sense throughout, is part of his nature– yes, perhaps as a Scotsman, but also simply as a man– a realization with which he eventually comes to terms.

Happily, in the film’s final shot, as Alan settles into his radio station studio, with all of Glasgow floating just outside the window, to take the Christmas morning shift and accompany his listeners in his familiar way, one truly understands how that alchemic mix of melancholy and lightness is in the spiritual and visual DNA of the film too. Which makes Comfort and Joy, for me, an almost perfect Christmas holiday movie.

Comfort and Joy looks to be a bit difficult to find in the usual streaming places, though Netflix or Amazon could probably set you up with a DVD for rent. However, I found it last night in a surprisingly robust 720p transfer on, of all places, YouTube. Click this link and you can see it for yourself for the holidays.