A mad extortionist is blowing up rollercoaster rides. Put-upon George Segal must stop him because we all know that time, the tide and roller coasters wait for no man. Producer Jennings Lang’s by-the-numbers suspense thriller is light on suspense and thrills, but the cast is good and the screenplay at least partly intelligent. And hey — it’s got a teenage Helen Hunt! 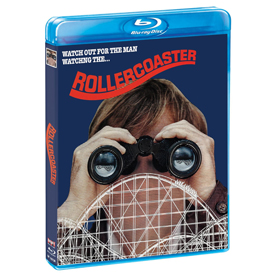 Jaws inspired plenty of rip-off movies about sharks, bears, killer whales and monster octopi threatening beaches. Since it wasn’t safe to go back to the water, Universal producer Jennings Lang turned out a movie that was surely green-lit after a two-sentence story pitch: mad bomber threatens rollercoaster. Thrill ride amusement parks took a big upswing in the 1970s, with redesigned rides that were (sometimes) much safer than those old wooden structures. In Los Angeles Magic Mountain was the place to go. A college roommate had worked there one summer, so I heard all the stories. But the bottom line was that even the scariest rollercoaster was extremely safe and reliable.

Rollercoaster is a disaster movie about a mad extortionist. It has everything a producer could love. There’s nothing to build, as the title attractions already exist. I would think that in today’s political climate no theme park would dare let a movie imply that their attractions are open to attack, or unsafe. But in 1977 Universal likely pitched its show as a two-hour free advertisement for their parks. I don’t see credits that imply that the theme parks paid for the privilege of being featured, but Uni surely got access for free or almost free.

That makes Rollercoaster a slam-dunk for its makers. Basically an extended TV show with bigger names and better cinematography, it’s the kind of picture that a producer could make from afar. Director James Goldstone had directed for Paul Newman and would soon be tapped by Irwin Allen for When Time Ran Out…, the last and least of formula disaster movies. Everything about the movie is professional; nothing is inspired.

Safety inspector Harry Calder (George Segal) is alarmed when a rollercoaster back East has a catastrophic accident; he gave it a pass three months before. When the park doesn’t cooperate with him, Harry finds out that several park owners are having a secret meeting in Chicago. He crashes the meeting just as the cause of the ‘accident’ and a fire at another park becomes clear — the meeting receives an extortion message demanding a million dollars. F.B.I. Agent Hoyt (Richard Widmark) shows Harry the door, but then asks him back to help catch the criminal, because the phone calls demand that Harry be the one to deliver the money. Taking to the mysterious ‘Young Man’ by phone, Harry finds out that his enemy is an electronic genius, and has bugged all the meetings so far. More mayhem is barely averted before Harry must deliver the cash at a Southern California park opening a new ride. Harry performs his risky mission — only to find out that Hoyt has given the extortionist marked money. Only Harry believes that the maniac will follow through on his threat to kill more innocent people.

Terrorism, mass killings, violent vengeance against the general public — none of this is particularly desirable right now. Rollercoaster is ‘thriller lite’ in all respects, which means we don’t take it seriously enough to be offended. If you loved this movie when it came out, or can remember seeing it under a veil of nostalgia, more power to you: I know plenty of genuinely bad movies that I love because of the circumstances when I saw them (you softie, you). As I avoided both this and Two-Minute Warning when they were new, I thought I’d check it out.

It’s at least better than Jaws 2. The main performers put in solid duty. George Segal is interesting at all times. His put-upon inspector can summon up a sarcastic attitude about anything. And the script doesn’t ask him to behave obnoxiously. Harry has to pick up his daughter (a very young Helen Hunt!) from his ex-wife, and there’s no acrimony there. The new girlfriend (Susan Strasberg) has the real thankless role and carries it with dignity. Everything is a cliché but never offensively so — although we know that Strasberg and Hunt must show up uninvited for the last scene, to at least get close to the center of jeopardy.

Richard Widmark can play roles like this in his sleep. Considering that the villain has already massacred a number of people, Widmark’s Agent Hoyt does seem a little bit stupid to assume that the obviously brilliant, determined and vindictive killer can be captured through ordinary procedure. Even though Harry bears no responsibility, it is reasonable that he would be concerned for the loss of life and want to do his best to help. A nice touch is that there are no moral speeches or ‘a man’s gotta do what a man’s gotta do’ scenes. We just read the strain in Segal’s face.

Timothy Bottoms also phones it in as the implacable extortionist. He plays the unnamed ‘Young Man’ as if he were on a double dose of Valium, all calm and collected. Henry Fonda slips in and out of two scenes as if he didn’t have to change his clothes from playing a tycoon in Tentacles. Everything Fonda says sound like he’s really saying, “this better be the last take ’cause I’m outta here and where’s my paycheck?”

The aforementioned Helen Hunt is all of fourteen years and cute as a button. The legion of extras playing park patrons is augmented with a few excited ringers for close-ups — newcomer Craig Wasson is one. Robert Quarry is the mayor, Quinn Redeker a park owner and Steve Guttenberg a messenger (remember them?). 50’s comic Dick Wesson must have been a pal of producer Jennings Lang, while Gary Franklin may have been cast as a reporter because he was one in real life. If he was hired in an effort to spin the reviews, I guess Franklin has a precedent in Rex Reed. I’m not sure if Franklin was doing movie reviews in 1977.

Some movies are padded with travelogue scenery.  Rollercoaster must have twenty minutes of fairground atmosphere and rollercoaster rides that last longer than they do in real life — even in Disneyland, one must normally wait on line for over ten times the duration of the ride. The shots are standard ‘camera attached to the rollercoaster car’ setups, and some good fast panning action. There’s nothing innovative, but we also see no rear-projection, which mars even the best rollercoaster sequences in otherwise great old movies like Woman on the Run.

It’s good that George Segal keeps us interested for the show really has no operative suspense. You can cut back and forth all you want between a finger on a radio button, a piece of track that’s ready to be exploded, and various people on the rides, but the Hitchcock suspense-O-meter registers nothing — the people on the ride are completely unaware of what’s in store for them, so our feral thrill of being able to think, ‘you guys are in TROU—BLE’ goes unnourished. The script delivers mayhem right up front, so that we spend the rest of the movie waiting for more gore. Instead, what violence was shot was cut way back before the final cut. Our brainiac extortionist suddenly becomes a total clod for the last scene, going out with more of a whimper than a bang. At two hours the show is about twenty minutes too long. Every scene is drawn out, especially the long sequence in which George Segal is forced to run from pay phone to pay phone in the amusement park, like Harry Callahan in Dirty Harry.

That gruesome derailment catastrophe at the beginning is no action highlight. Rollercoaster cars going 40 MPH are replaced across a cut with dummy cars with dummy mannequins, toodleling along at perhaps 15 mph; only kids will not be yelling, ‘fake!’ Brian De Palma did more or less the same thing with a malfunctioning rollercoaster in his physical effects workout exercise The Fury, and the result was almost as phony. Not that I think the world needs someone to make a realistic movie about such accidents.

We used to make derisive remarks about movies licensed from toy lines, but the Lego movie was actually good. We’re told that the producer of Jaws didn’t want to repeat himself, but this movies suggests ideas for dynamite sequels: “Tilt-A-Whirl, The Movie!”… “Rotor, The Movie” ….

Shout Factory’s Blu-ray of Rollercoaster is a quality item with a handsome transfer of this anamorphic widescreen attraction. I don’t think the movie has more than a couple of night scenes, so it is popcorn & cotton candy bright all the way through. Although I haven’t the audio equipment to sample it, the disc is said to carry a real Sensurround track, which I presume is triggered whenever a rollercoaster is in motion. I saw the premiere Sensurround feature Earthquake with Hoyt Yeatman at Grauman’s Chinese in 1974; the gimmick worked well to enliven what was otherwise a pretty tepid experience. The audio format used and extra cue channel to triggered the big subwoofers to achieve the ‘Rumble-Rama’ tummy shaking effect. If I recall correctly, Hoyt said he could hear the added low frequency channel ‘clicking in.’ I also saw a Sensurround Trailer for Midway. At least Rollercoaster has a better excuse for the gimmick than that show did.

Lalo Schifrin can always be depended on for interesting soundtrack themes, but I have to say that the main ‘carnival’ tune for this show eventually became annoying, perhaps through repetition, perhaps because it was signaling a suspense mood, when no suspense was to be found. During tense action scenes, the score uses jabbing violin notes to better effect, a strategy positioned somewhere between James Bernard’s nervous strings in his Quatermass films, and Bernard Herrmann’s stabbing effect for Psycho.

The extras are a still gallery, a trailer, and a 12-minute interview produced by Daniel Griffith. The enthusiastic writer of Rollercoaster’s story idea, former child actor Tommy Cook, performs for the camera and says a few ‘interesting’ things, such as claiming that his movie started a rollercoaster craze. But we do acknowledge that the big rides (known in several foreign languages as ‘Russian Mountains’) do have crazed fans. Crazed is right — taking my kids to Magic Mountain in the early ’90s, they took rides that I couldn’t go on, due to inner ear issues. I didn’t want my youngest kid to go on them either. With the older two I looked the other way.